9 August 1864: “it is as delightful to be free of that anxious, terrible dread of them”

Item Description:  Letter from M. S. Seawell to his cousin Nanny from The Shelter.  He writes about how he misses his family and how the people of Gloucester are likely to be forced to live on nothing.  He also mentions the temporary end of Union occupation of the area but fears they will return. 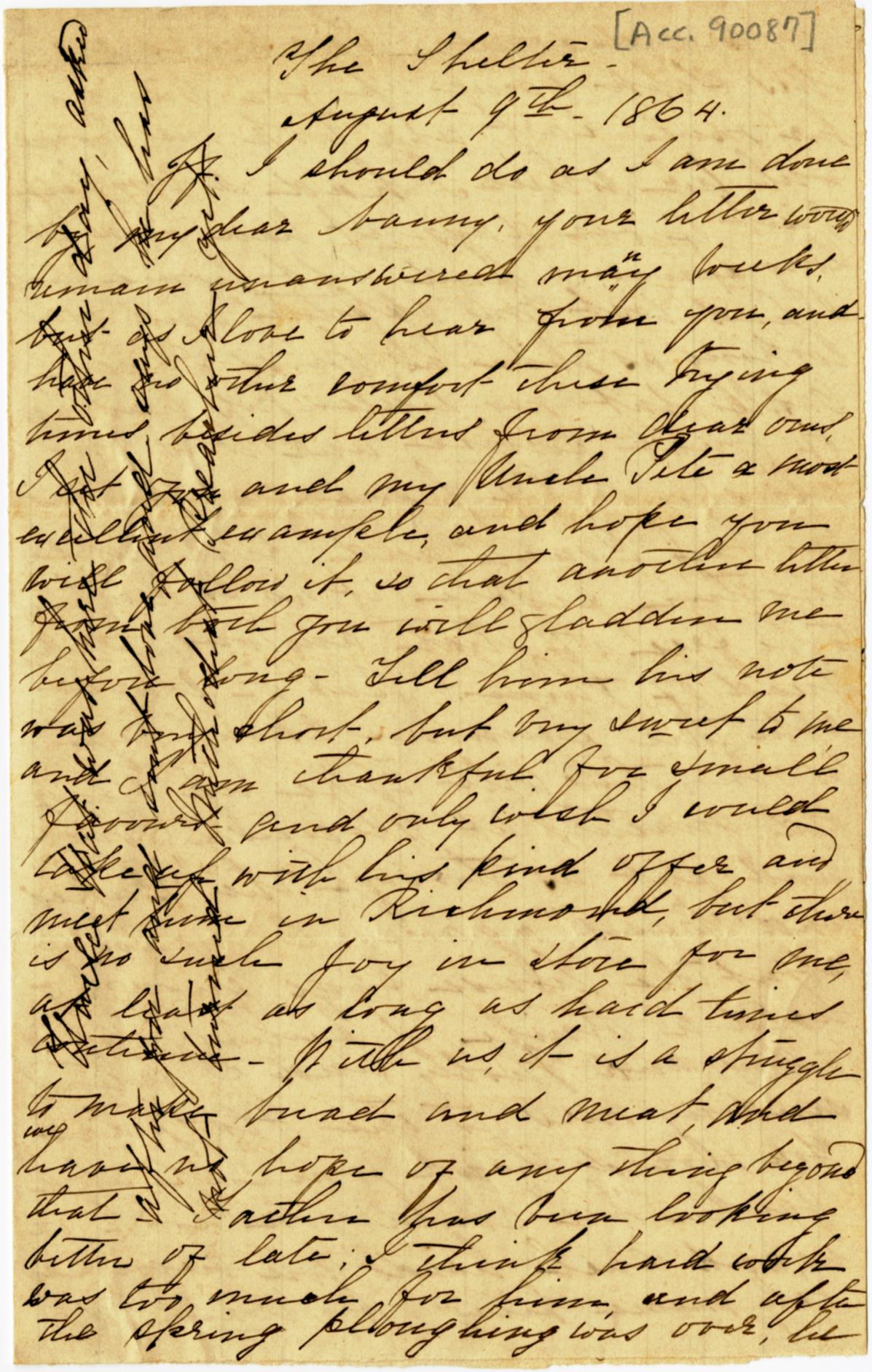 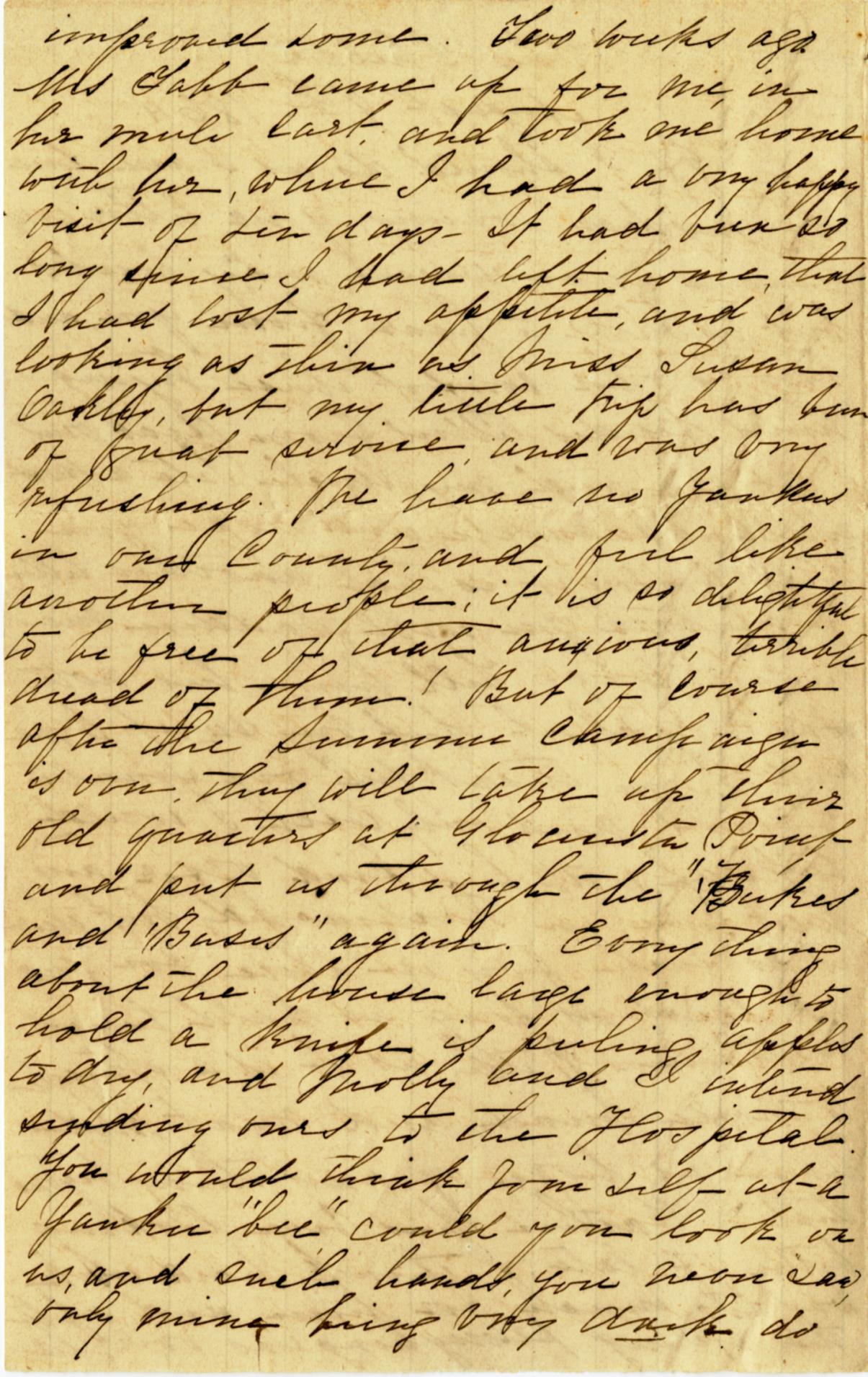 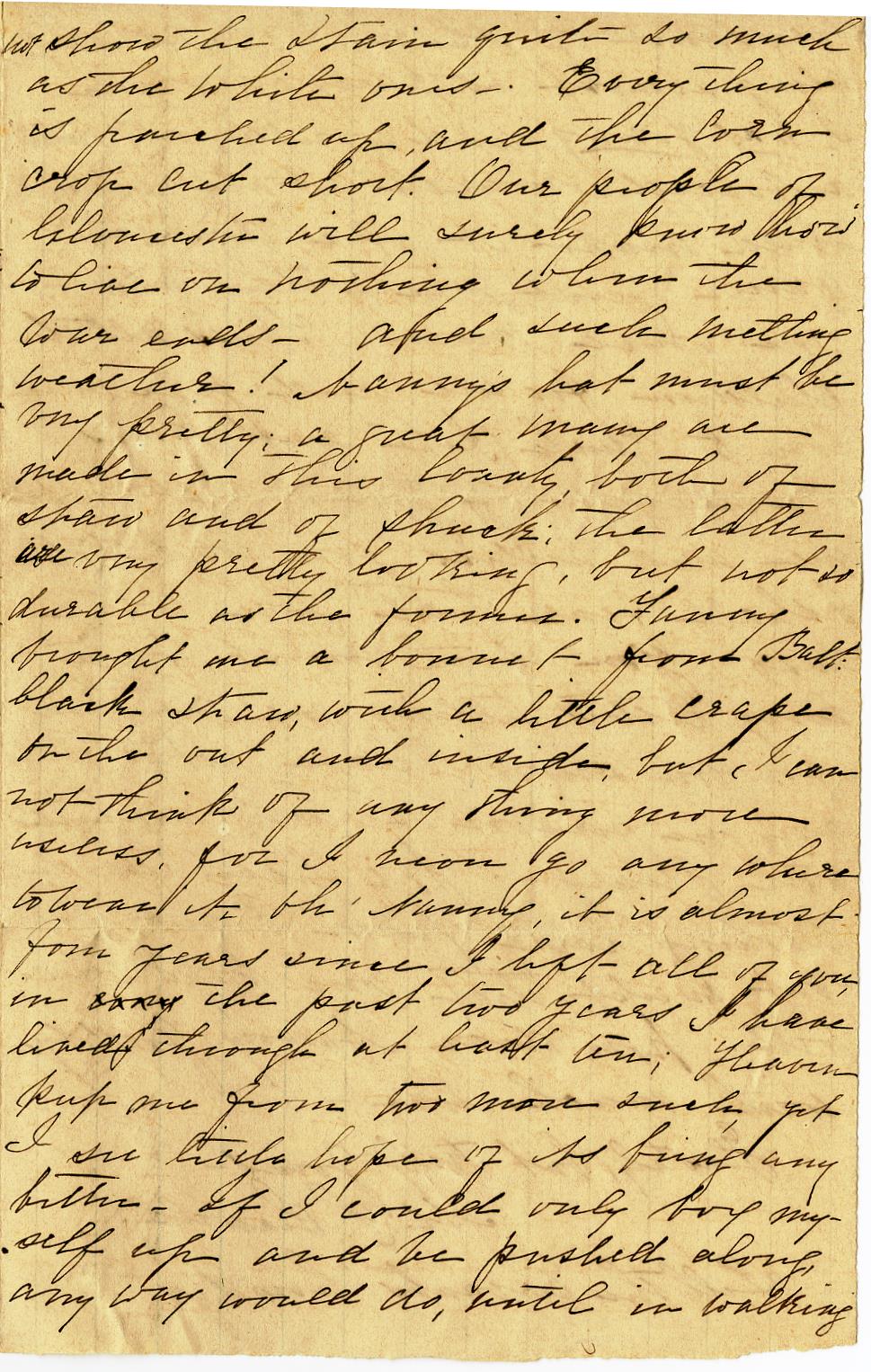 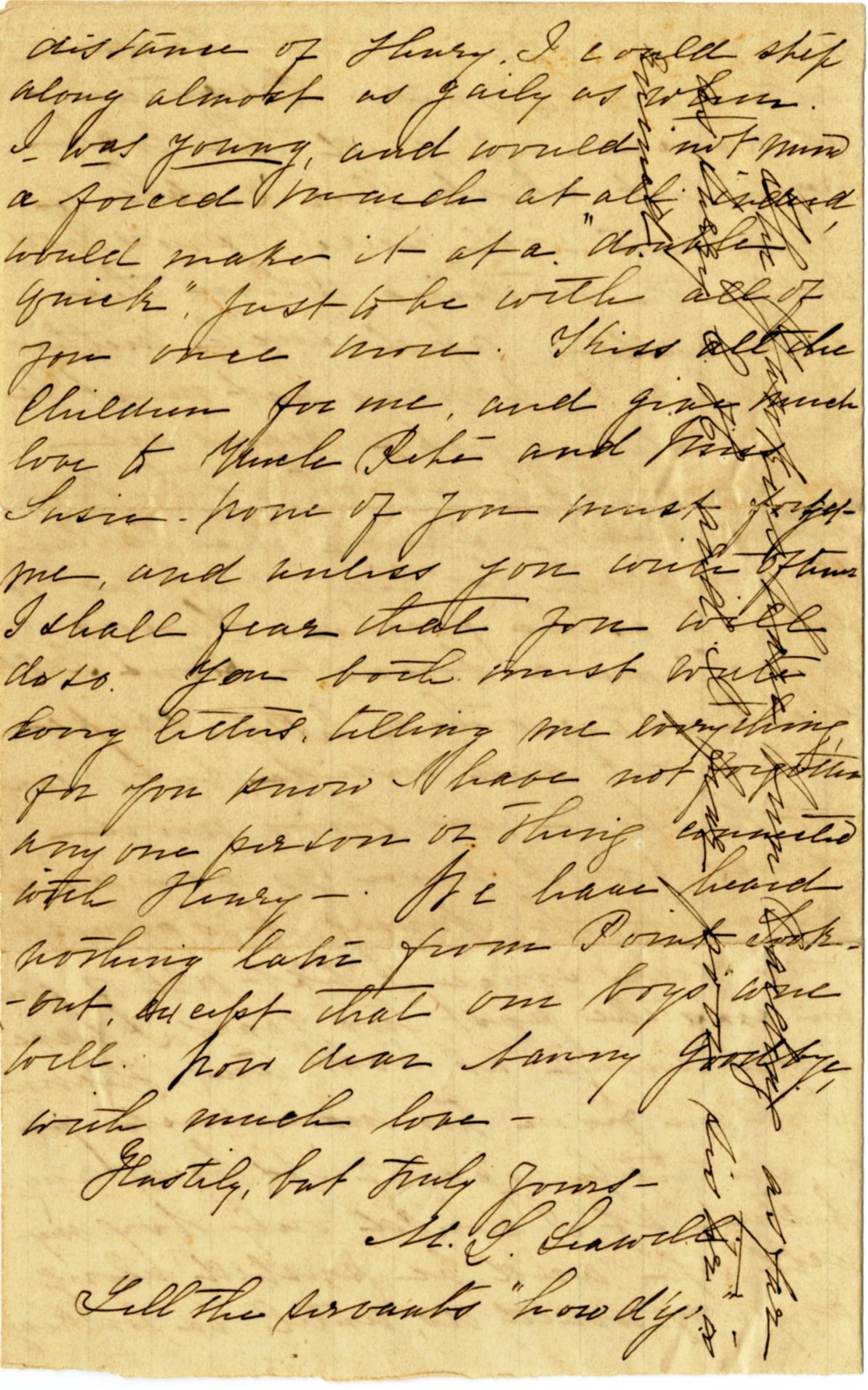 I should do as I am done by my dear Nanny, your letter would remain unanswered many weeks, but as I love to hear from you, and have as other comfort these trying times besides letters from dear aunt. I set you and my Uncle Pete a most excellent example and hope you will follow it, is that another letter from both you will gladden me before long. Tell him his note was very short but very sweet to me and I am thankful for small favors and only wish I would take up with his kind offer and must come in Richmond, but there is no such joy in store for me, at least as long as hard times continue- With us, it is a struggle to make bread and meat and we have us hope of anything beyond that. Father has been looking better of late; I think hard work was too much for him, and after the spring ploughing was over, he improved some. Two weeks ago Mrs Gabb came up for me, in her mule last and took one home with her, where I had a very happy visit of a few days. It had been so long since I had left home, that I had lost my appetite and was looking as thin as Miss Susan Oakley, but my little trip has been of great service and was very refreshing. We have no Yankees in our County and feel like another people; it is as delightful to be free of that anxious, terrible dread of them. But of course after the summer campaign is over, they will take up their old quarters at Gloucester Point and put us through the “Bukes and Buses” again. Everything about the house large enough to hold a knife is puling apples today and Molly and I intend sending ours to the Hospital. You would think yourself at a Yankee “bee” could you look on us and such hands you never saw only mine being very dark do not show the stain quite so much as the white ones. Everything is pushed up and the corn crop cut short. Our people of Gloucester will surely know how to live on nothing when the ? calls- and such melting weather! Nanny’s hat must be very pretty; a great many are made in this county both of straw and of shuck; the latter are very pretty looking, but not so durable as the former. Fanny brought me a bonnet from Balt: black straw, with a little crape on the out and inside, but, fear not think of anything more useless, for I never go anywhere to wear it oh Nanny, it is almost four years since I left all of you in the past two years I have lived through at least ten; Heaven keep me from two more such yet I see little hope of us being any better. If I could only box myself up and be pushed along, any way would do, until in walking distance of Henry. I could ship along almost as gaily as when I was young and would not mind a forced march at all indeed would make it at a “double quick,” just to be with all of you once more. Kiss all the children for me, and give much love to Uncle Pete and Miss Susan- none of you must forget me and unless you write of them I shall fear that you will do so. You both must write long letters, telling me everything for you know I have not forgotten anyone person of thing connected with Henry. We have heard nothing late from Point Lookout except that our boys are well. Now dear Nanny goodbye with much love.

Hastily but truly yours,

The Yankees have been raiding as far as Surry C.H. and I fear poor sister is ruined.

Uncle Wat. was here the other day asked after you and sent love and says he has not turned without at ? yet.