Posted on 19 Aug ’14 by Rebecca Williams

Item Description: Letter dated 19 August 1864 from William Dudley Gale to his wife. He joined the Confederate Army as a staff officer for his father in law, General Leonidas Polk, in the fall of 1862. After the general’s death near Pine Mountain, Ga., in June 1864, Gale was assigned to the staff of General Alexander P. Stewart. 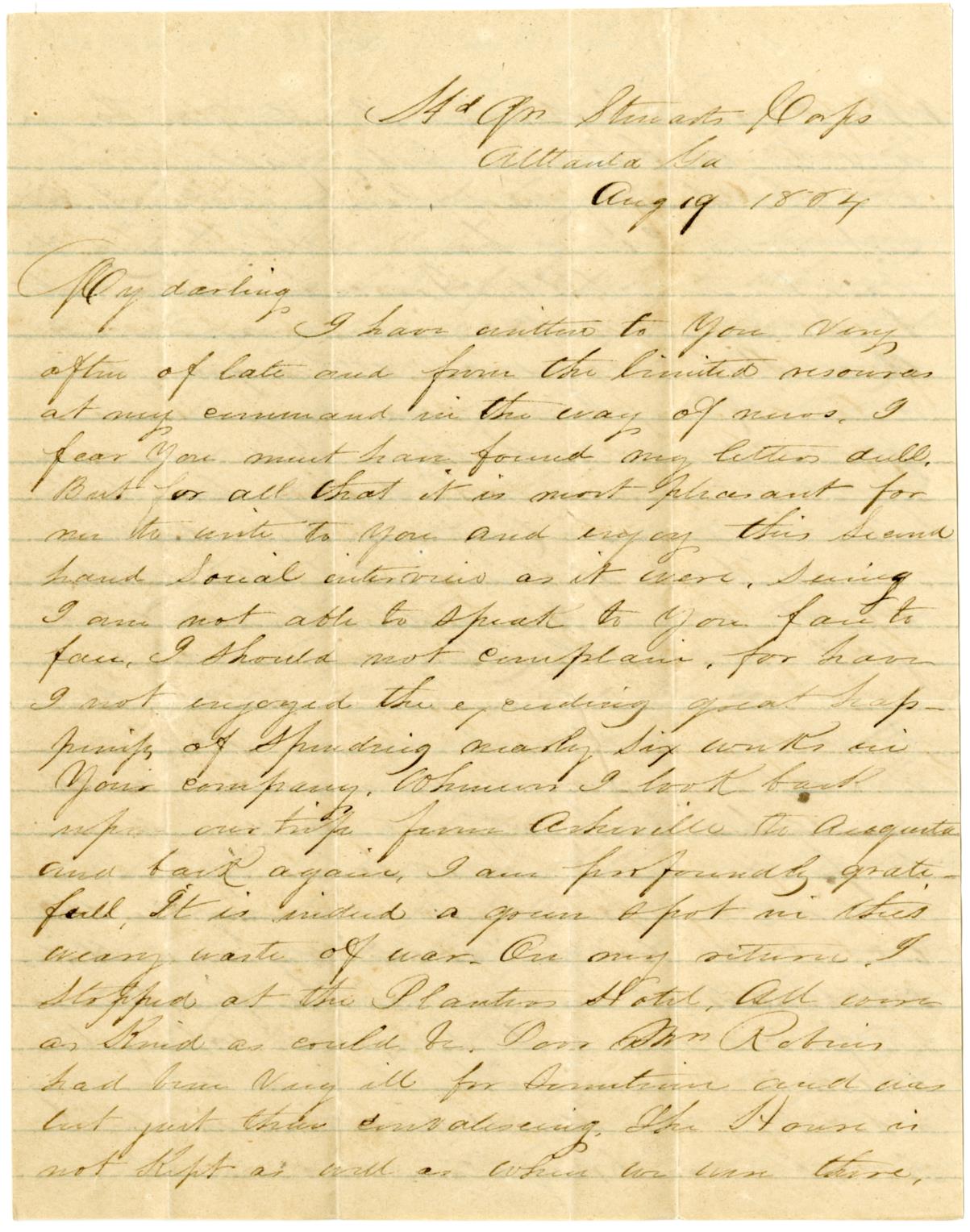 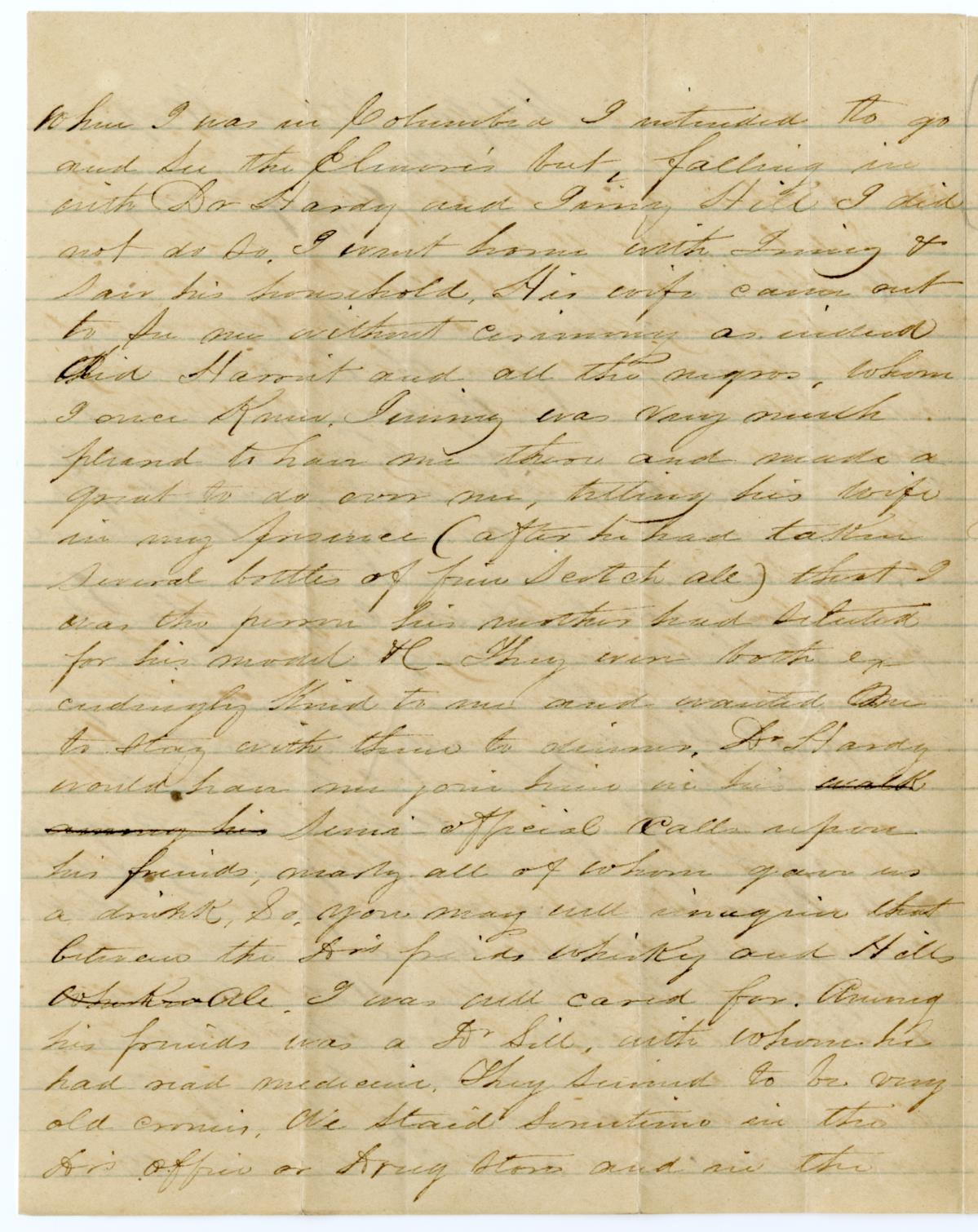 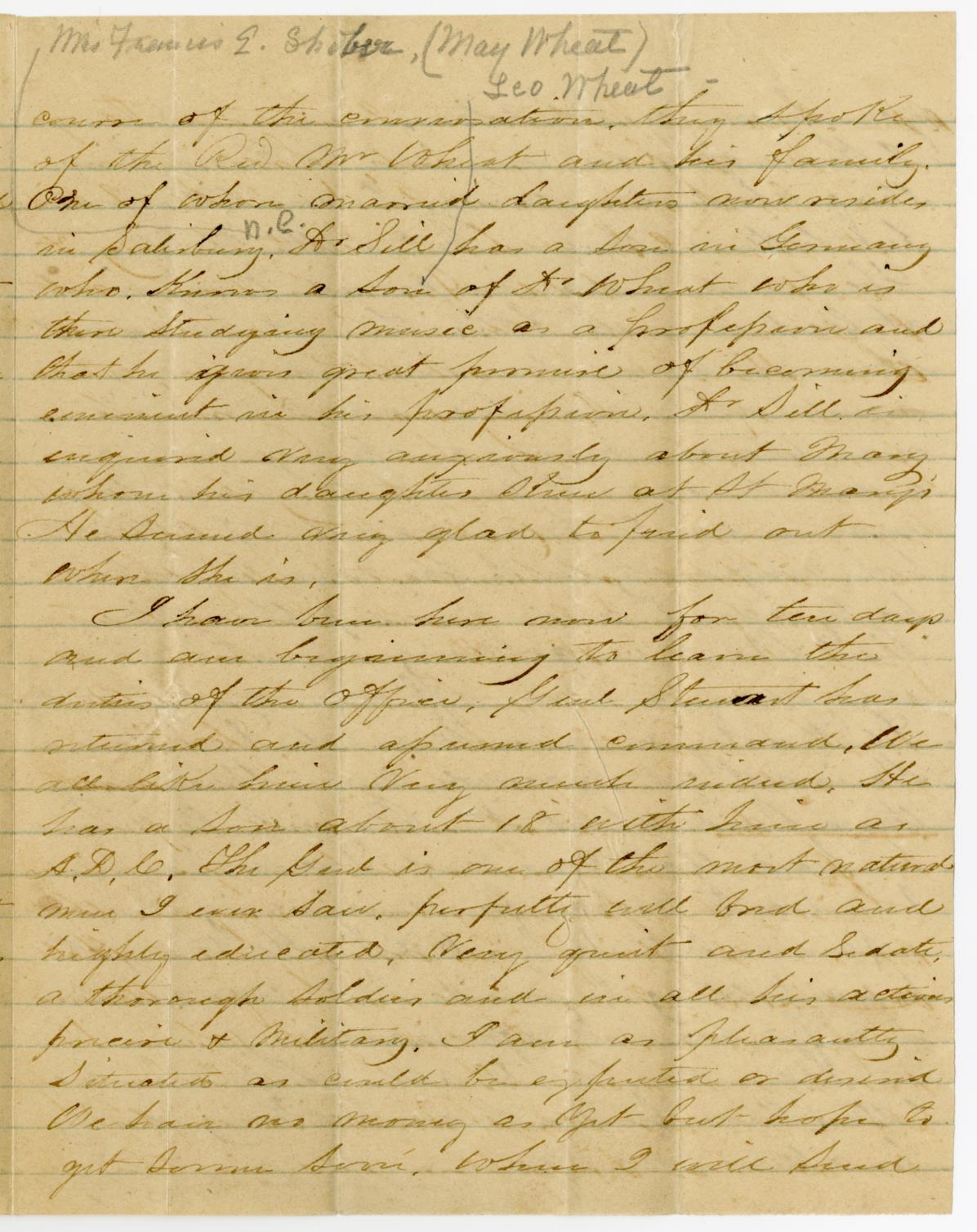 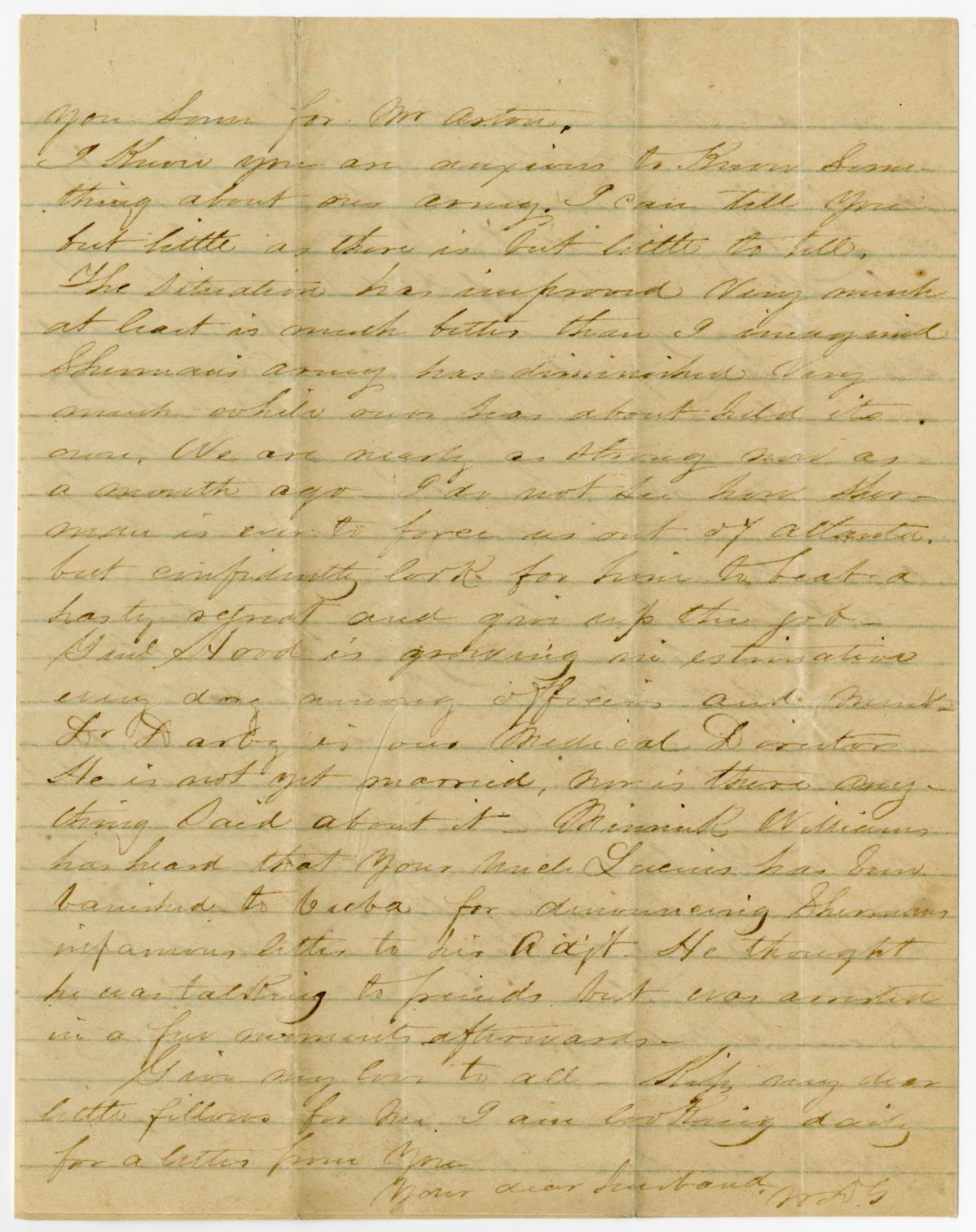 I have written to you very often of late and from the limited resources at my command in the way of news. I fear you must have found my letters dull. But for all that it is most pleasant for me to write to you and enjoy this second hand social interview as it were. Seeing I am not able to speak to you face to face, I should not complain for have I not engaged the exceeding great happiness of spending nearly six weeks in your company. Whenever I look back up our trip from Asheville to Augusta, and back again, I am profoundly gratefull. It is indeed a good spot in this weary water of war. On my return I stopped at the Planters Hotel. All were as Kind as could be. Poor Mr. Rob— had been very ill for sometime and and was ? just there convalescing. The House is not kept as well as when we were there. When I was in Columbia I intended to go and see the Elmore’s but falling in with Dr. Harry and Jimmy Hill  I did not do so. I went home with Jimmy + saw his household. His wife came out to see me without warning as indeed  Did Harriet and all the negros, whom I once knew. Jimmy was very much pleased to have me there and made a great to do over me, telling his wife in my presence (after he had taken several bottles of fine scotch ale) that I was the person his mother had selected for his model. They really were both exceedingly kind to me and wanted me to stay with them to dinner. Dr. Hardy would have me join him in his ? official calls upon his friends, nearly all of whom gave us a drink. So you may well imagine that between the Dr’s friends whiskey and Hills ale I was well cared for. Among his friends was a Dr. Sill, with whom he had mad medicine. They seemed to be very old cronies. We staid sometime in the Drs office or drug store and in the course of the conversation they spoke of the Red Mr Wheat and his family, one of whom married daughters now resides in Salisburg N.C. Dr Sill has a son in ? who knows a Son of Mr Wheat who is there studying music as a profession and that he gives great promise of becoming ? in his profession. Dr Sill inquired very anxiously about Mary whom his daughter ? at St Mary’s He seemed very glad to find out where she is.

I have been here now for ten days and am beginning to learn the duties of the office. Genl Stewart has returned and assumed command. We all like him very much indeed. He has a Son about 18 with him as A.D.C. The Genl is one of the most natural men I ever saw perfectly well bread and highly educated, very quiet and sedate, a thorough soldier and in all his actions precise + military. I am as pleasantly satisfied as could be expected or desired. We have have no money as yet but hope to get some soon. When I will send you some or Mr. Aston.

I know you are anxious to know something about our army. I can tell you but little as there is but little to tell. The situation has improved very much at least is much better than I imagined Sherman’s army has diminished very much while ours has about held its own. We are nearly as strong now as a month ago. I do not see how Sherman is ever to force us out of Atlanta, but confidently look for him to beat a hasty retreat and give up the job. Genl Hood is growing in estimation every day among officers and ?. Dr Hardy is our Medical Director. He is not yet married, nor is there anything said about it. ? Williams has heard that your uncle Lucius has been banished to Cuba for discovering Sherman’s infamous letter to his ? . He thought he was talking to friends but was arrested in a fur warrants afterwards.

Give my love to all. Kiss my dear little ? for me. I am looking daily for letter from you.