25 August 1864: “Then ten of Gregory’s men stepped up- and at the command- fired ten balls passing thro his chest- he fell backwards immediately”

Item Description: Letter from Andrew Lucas “Luke” Hunt to Willie.  He writes about the living condition for him and his men in Kentucky.  He also goes into great detail about the execution of a Confederate guerrilla by firing squad.  Andrew Lucas Hunt was from Chicago, IL and was an officer with the 134th Illinois Regiment, United States Army, during the Civil War. 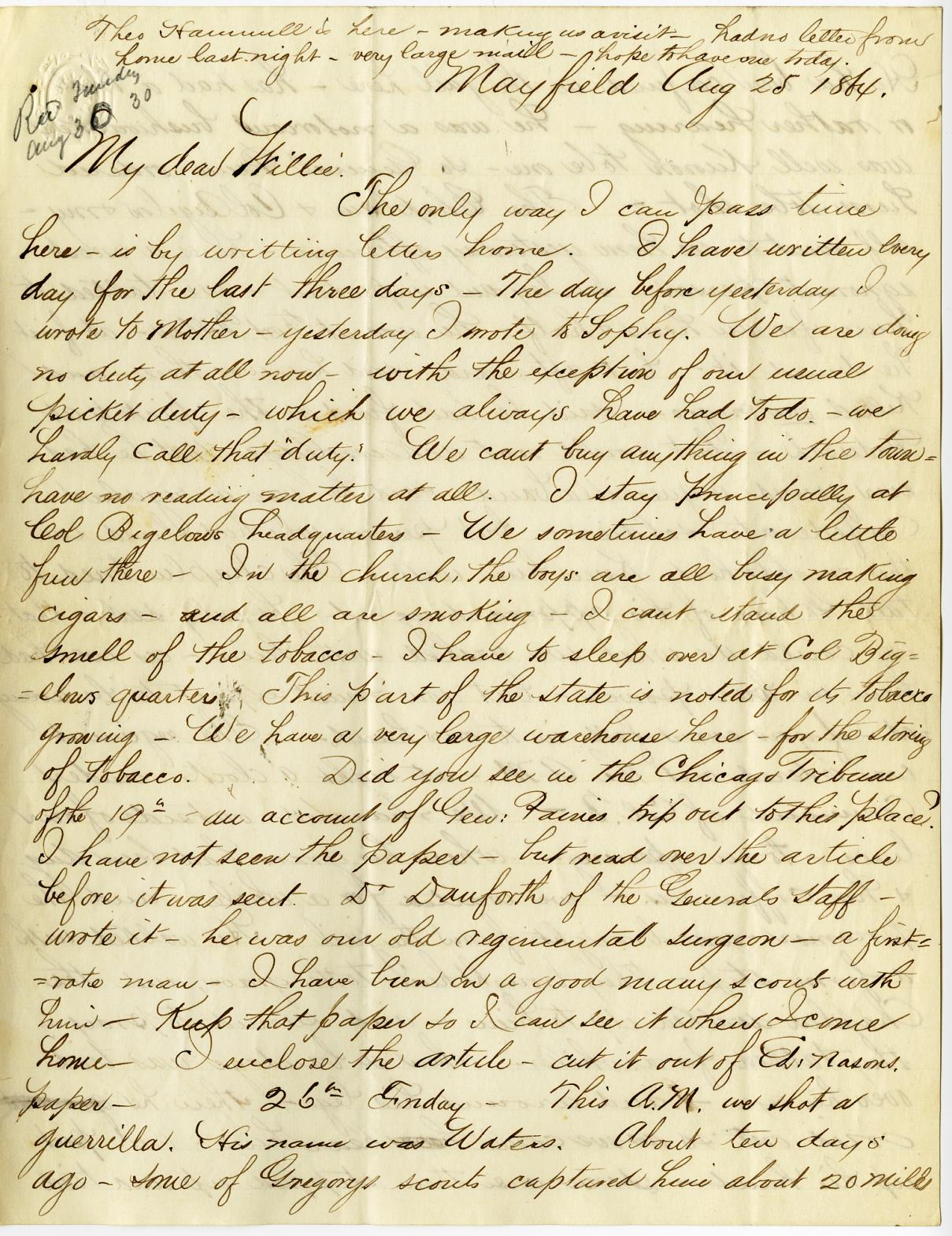 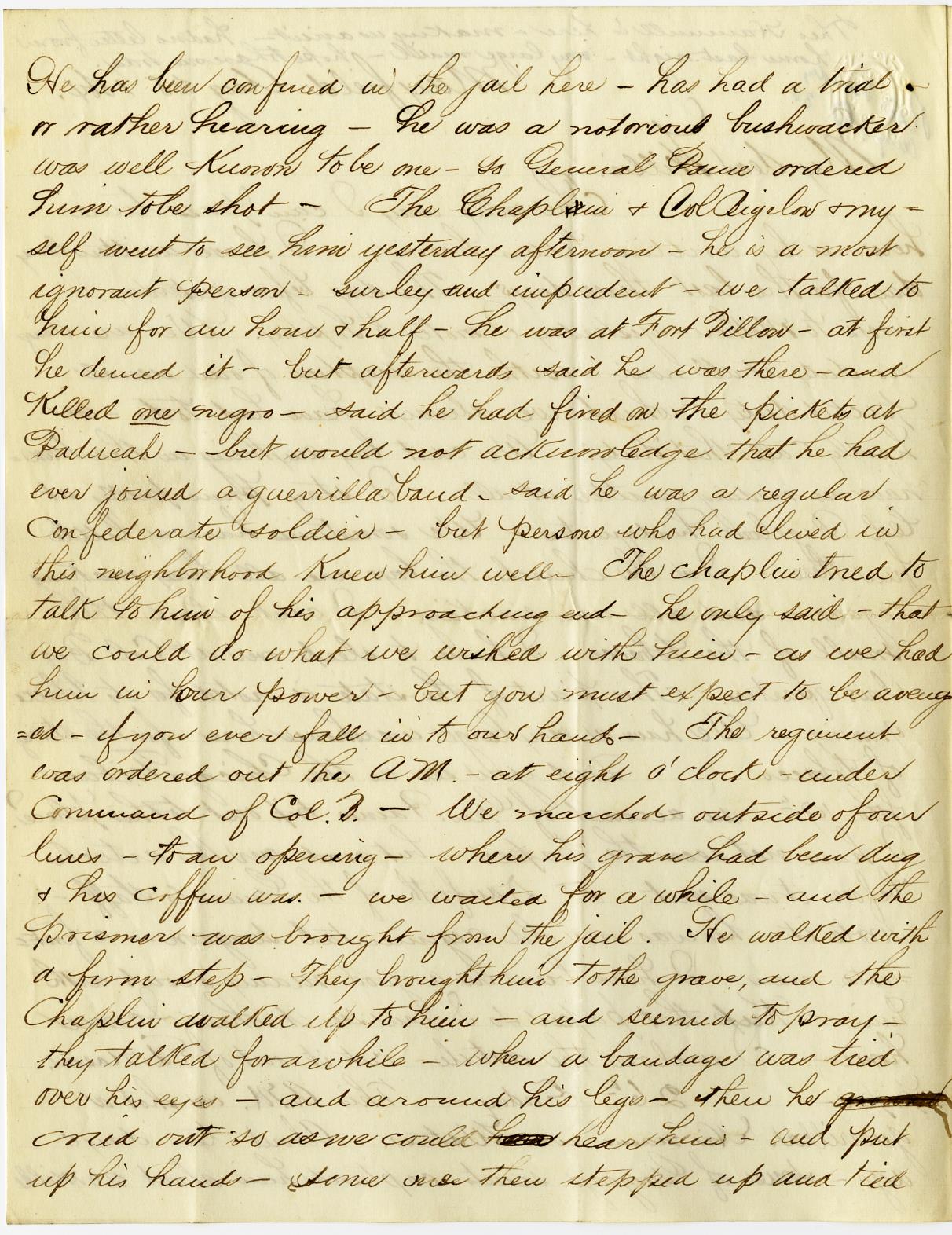 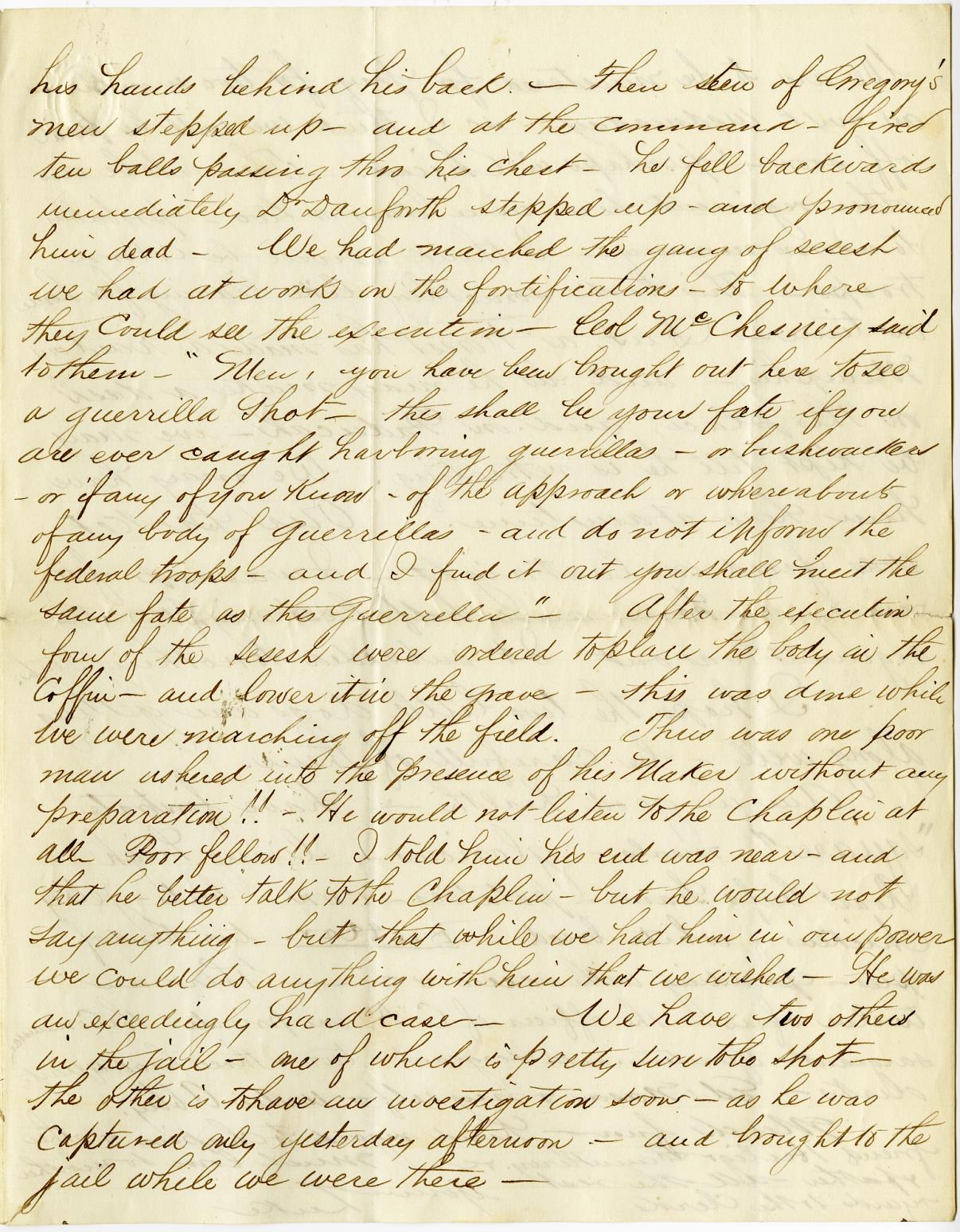 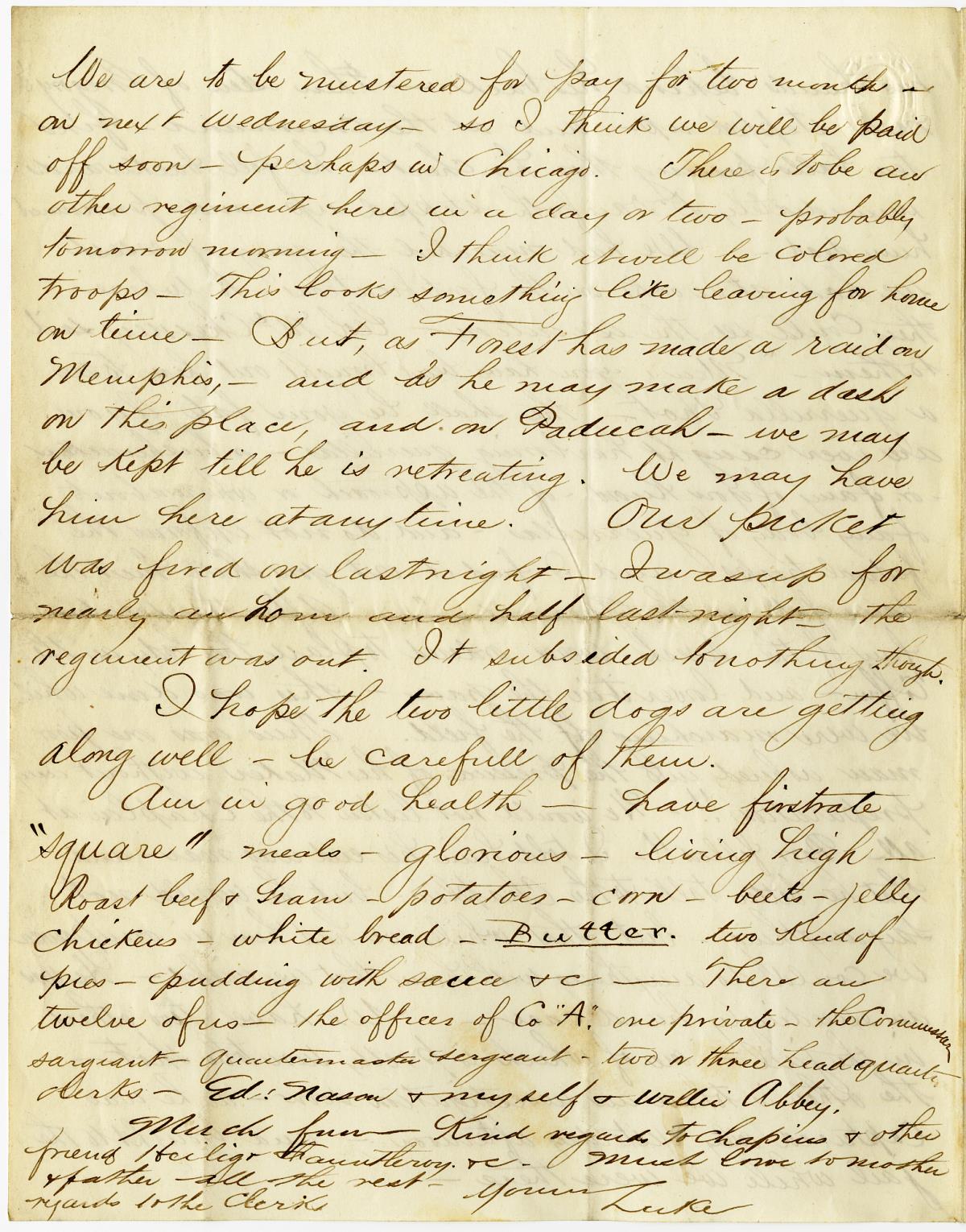 The only way I can pass time here is by writting letters home. I have written every day for the last tree days. The day before yesterday I wrote to Mother- yesterday I wrote to Sophy. We are doing no duty at all now, with the exception of our usual picket duty- which we always have had to do- we hardly call that “duty.” We cant buy anything in the town, have no reading matter at all. I stay pracetoally at Col Bigelows headquarters. We sometimes have a little fun there. In the church, the boys are all busy making cigars- and all are smoking- I cant stand the smell of the tobacco- I have to sleep over at Col Bigelows Headquarters. This part of the state is note for its tobacco growing- We have a very large warehouse here for the storing of tobacco. Did you see in the Chicago Tribune of the 19th an account of Gen: Paines trip out to this place? I have not seen the paper- but read over the article before it was sent. Dr Danforth of the Generals staff wrote it- he was our old regimental surgeon- a first-rate man- I have been on a good many scout with him- Keep that paper so I can see it when I come home- I enclose the article- cut it out of Ed Rasons paper- 26th Fnday- This A.M. we shot a guerrilla. His name was Waters. About ten days ago, some of Gregorys scouts captured him about 20 miles. He has been conferred in the jail here- he had a trial or rather hearing- he was a notorious bushwacker was well known to be one- so General Pain ordered him to be shot. The Chaplin and Col Bigelow and myself went to see him yesterday afternoon- he is a most ignorant person- surley and impudent- we talked to him for an hour & a half- he was at Fort Pillow- at first he denied it- but afterward said he was there- and killed one negro- said he had fired on the pickets at Paducah- but would not acknowledge that he had ever joined a guerrilla band- said he was a regular Confederate soldier- but persons who had lived in the neighborhood Knew him well. The chaplin tried to talk to him of his approaching end- he only said- that we could do what we wished with him- as we had him in hour power- but you must expect to be avenged if you ever fall in to our hands. The regiment was ordered out that AM- at eight o’clock- under command of Col. B.- We marched outside of our lines- to an opening- where his grave had been dug and his coffin was- we waited for a while- and the prisoner was brought from the jail. He walked with a firm step- They brought him to the grave, and the Chaplin walked up to him- and seemed to pray- they talked for awhile- when a bandage was tied over his eyes- and around his legs- then he cried out so as we could hear him- and put up his hands- some one then stepped up and tied his hands behind his back. Then ten of Gregory’s men stepped up- and at the command- fired ten balls passing thro his chest- he fell backwards immediately Dr Danforth stepped up and pronounced him dead. We had marched the gang of sesesh we had at work on the fortifications to where they could see the execution- Col McChesney said to them- “Men, you have been brought out here to see a guerrilla shot- this shall be your fate if you are ever caught harboring guerrillas- or bushwackers- or if any of you know of the approach or whereabouts of any body of guerrillas- and do not inform the federal troops- and I find it out you shall meet the same fate as this guerrilla.” After the execution four of the sesesh were ordered to place the body in the coffin- and lower it in the grave- this was done while we were marching off the field. There was one poor man ushered into the presence of his Maker without any preparation!!- He would not listen to the chaplin at all Poor fellow!! I told him his end was near- and that he better talk to the chaplin- but he would not say anything- but that while we had him in our power we could do anything with him that we wished. He was an exceedingly hard case. We have two others in jail- one of which is pretty sure to be shot- the other is to have an investigation soon- as he was captured only yesterday afternoon- and brought to the jail while were there.

We are to be mustered for pay for two months on next Wednesday so I think we will be paid of soon- perhaps in Chicago. There is to be another regiment here in a day or two- probably tomorrow morning- I think it will be colored troops- This looks something like leaving for home on time- But, as Forest has made a raid on Memphis, and as he may make a dash on this place, and on Paducah- we may be kept till he is retreating. We may have him here at anytime. Our picket was fired on last night- I was up for nearly an hour and half last night- the regiment was out. It subsided to nothing though.

I hope the two little dogs are getting along well- be carefull of them.

Much fun Kind regard to chapins & other friend Heiligr Fauntleroy &c. Much love to mother and father- all the rest

Regards to the clerks

Theo Hamwell is here- making us a visit- had no letter from home last night- very large mail- hope to have one today.