Posted on 3 Sep ’14 by Rebecca Williams 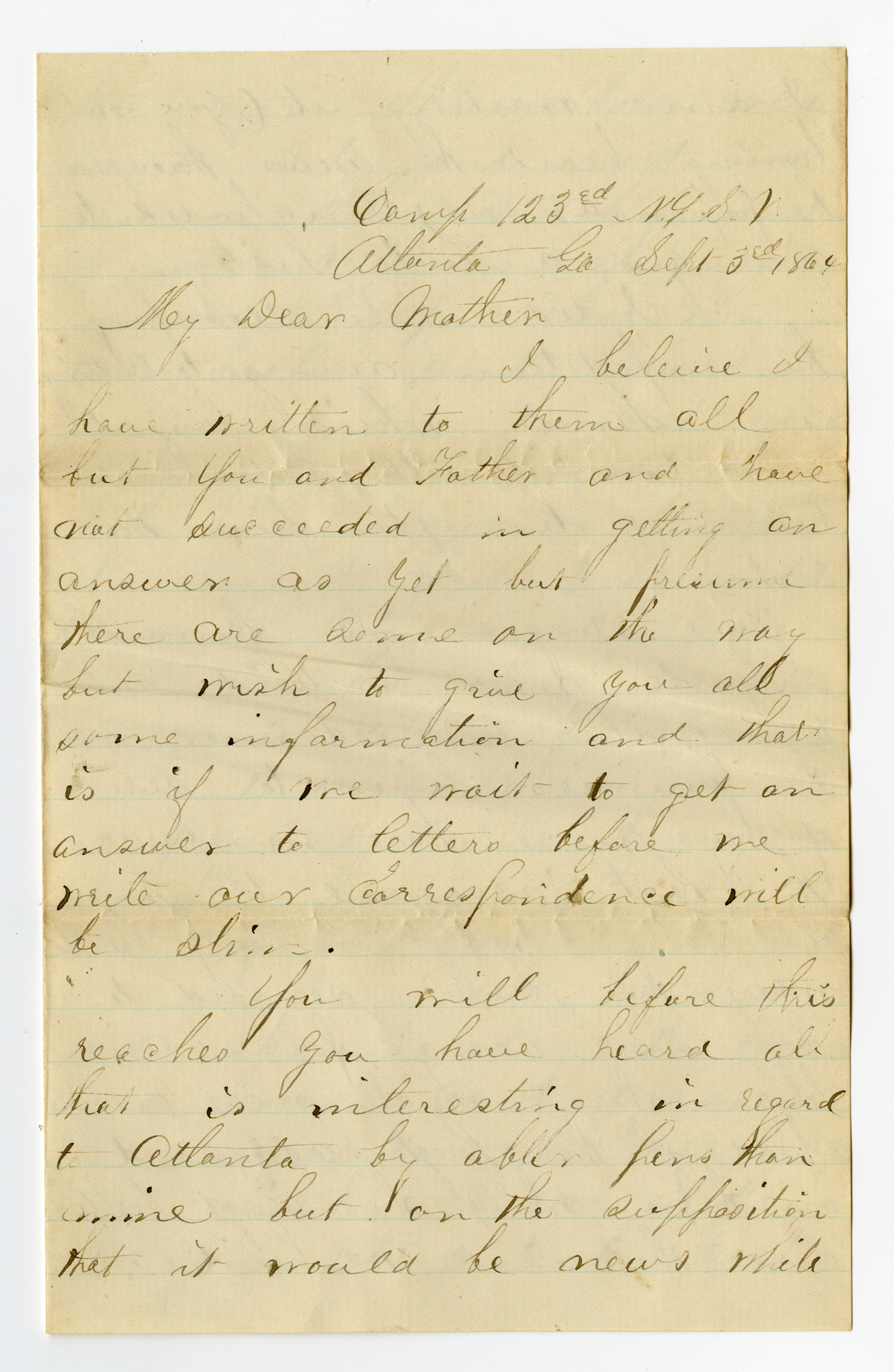 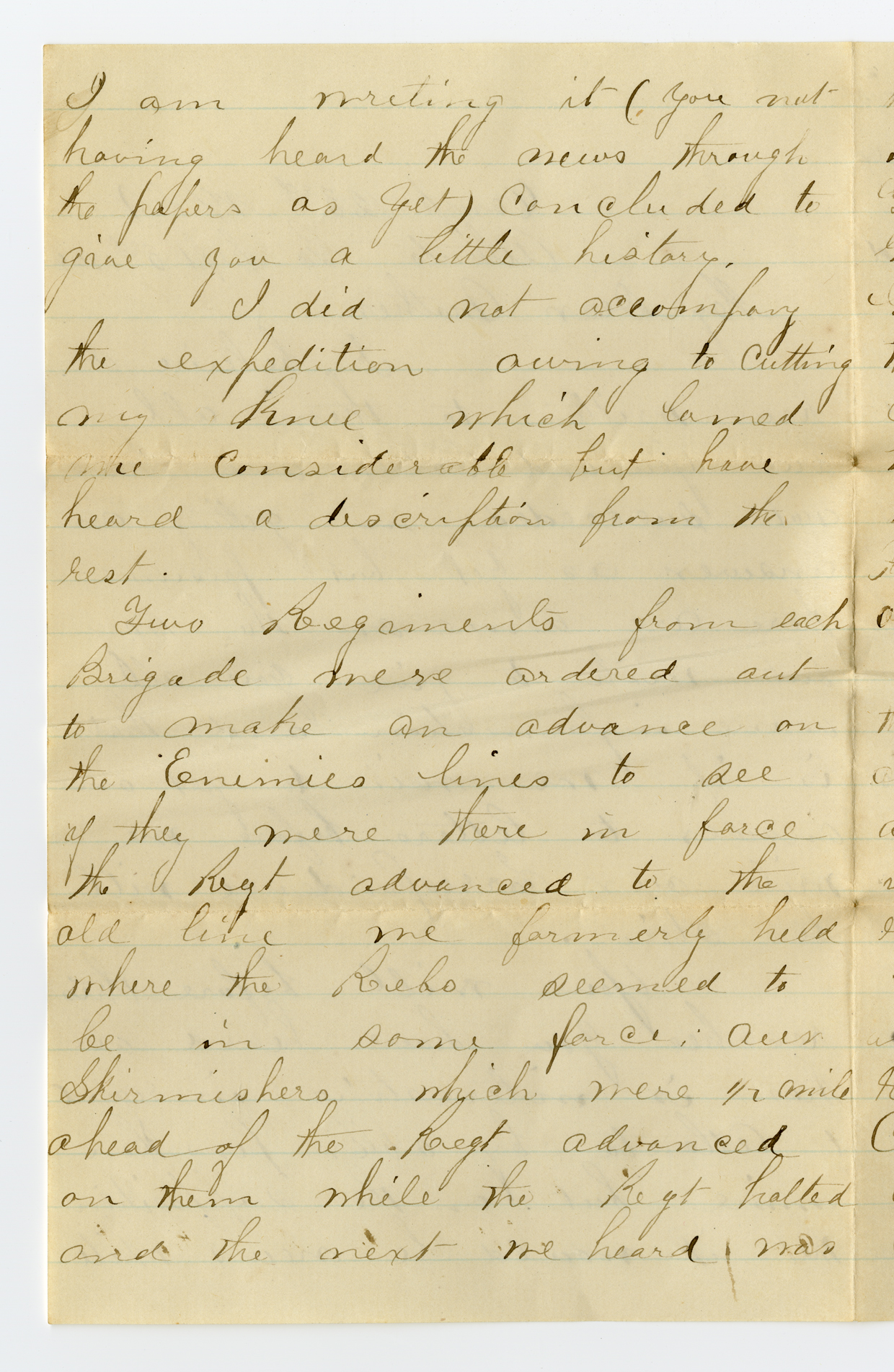 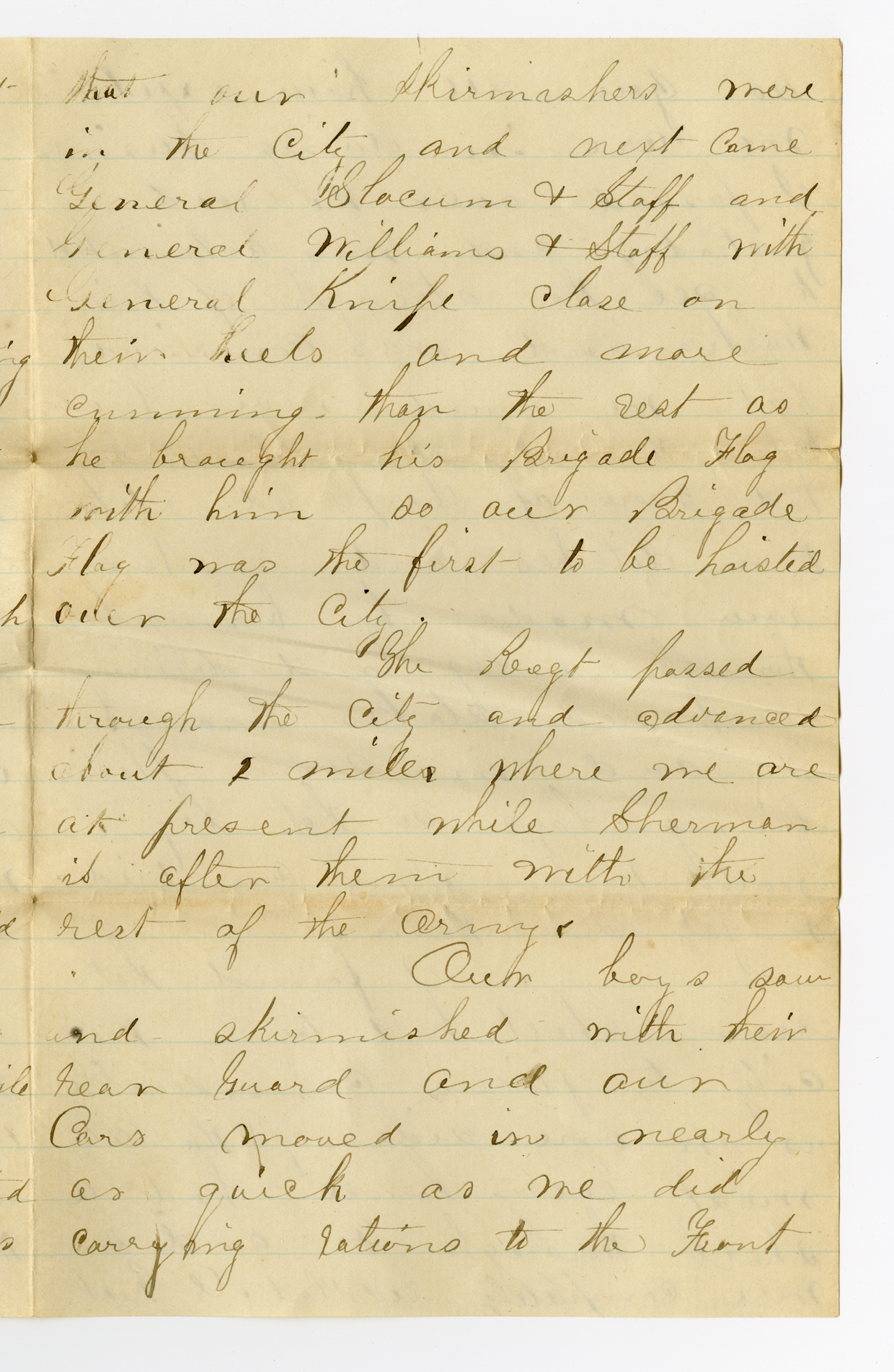 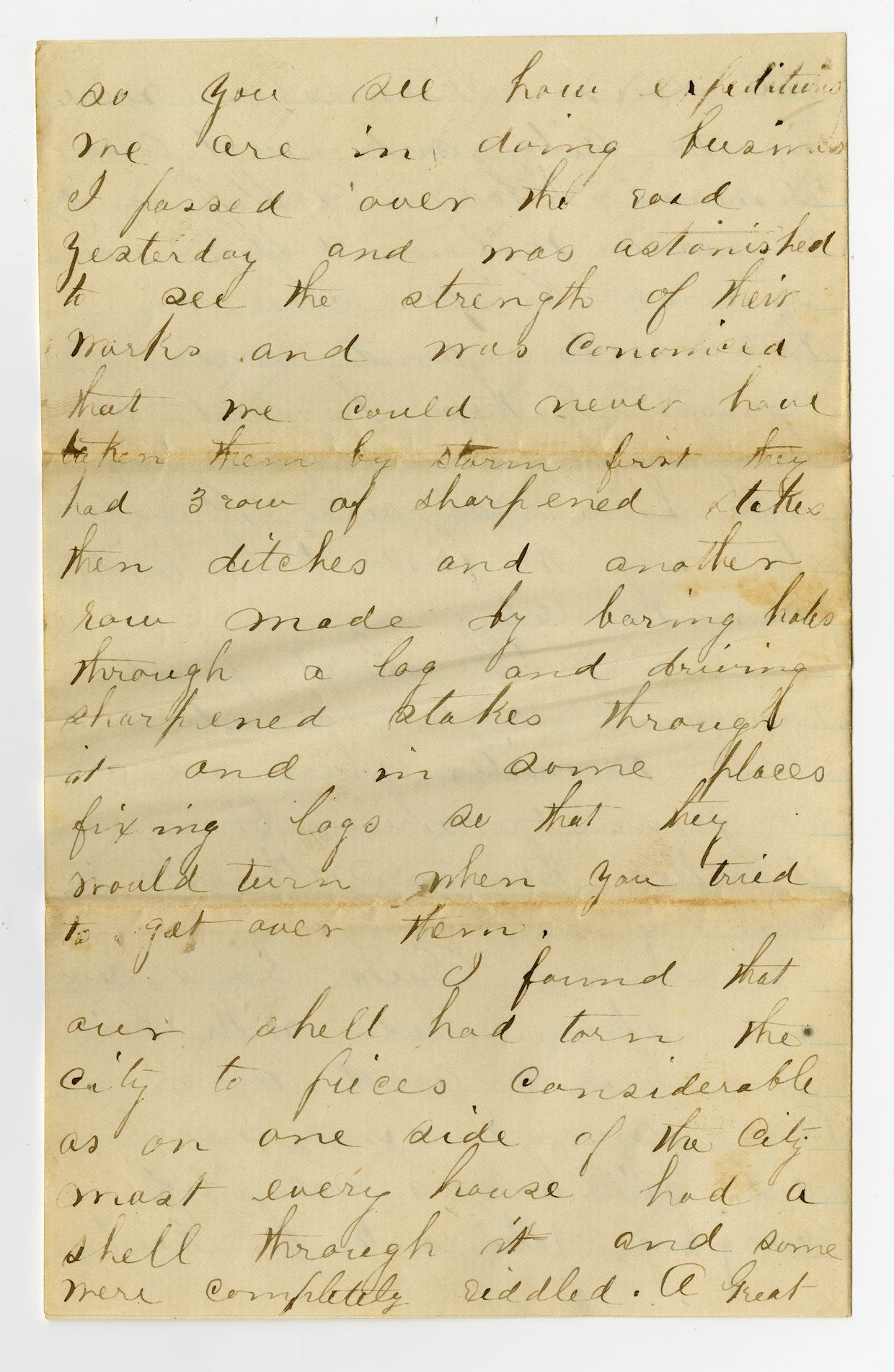 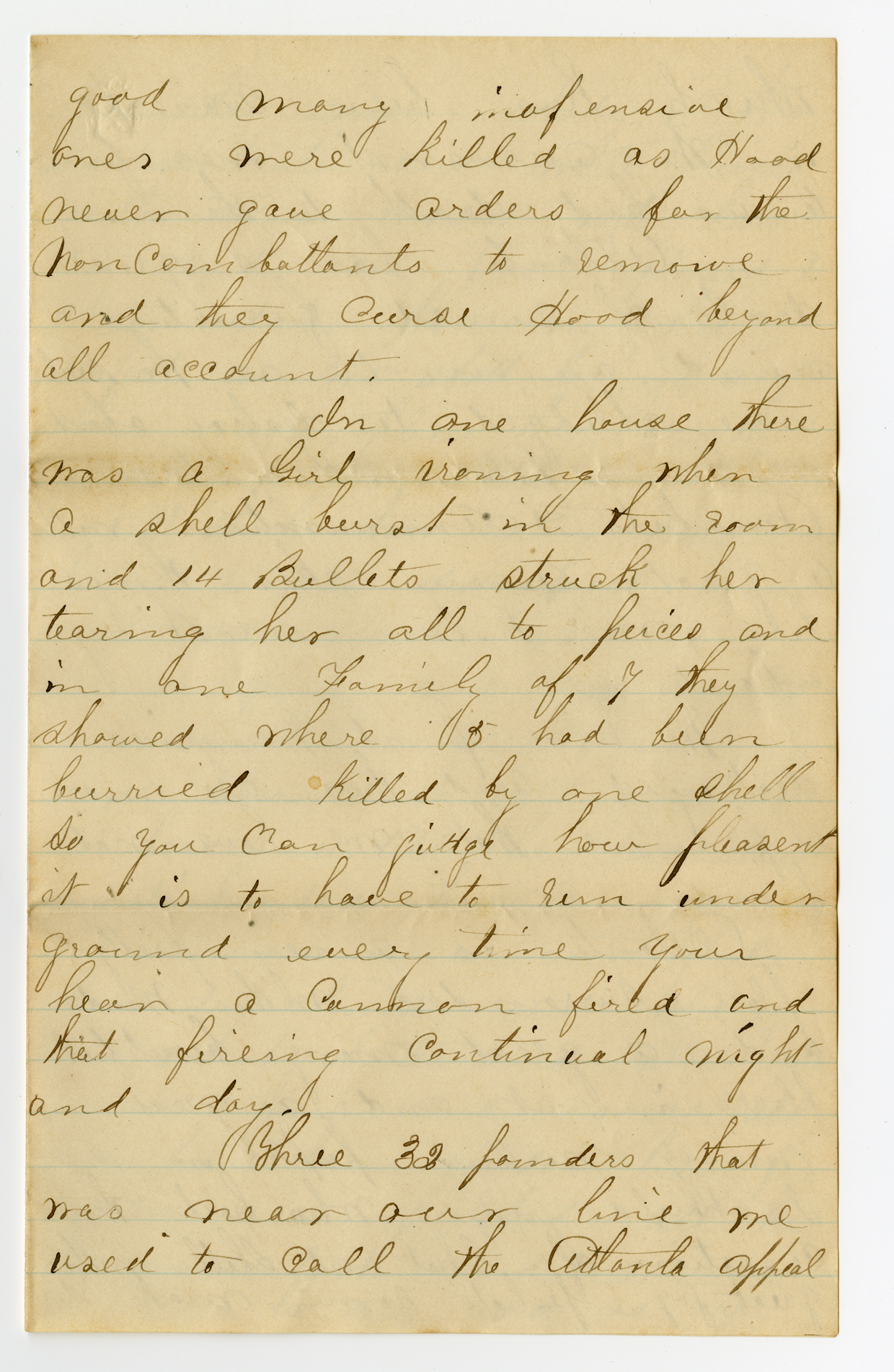 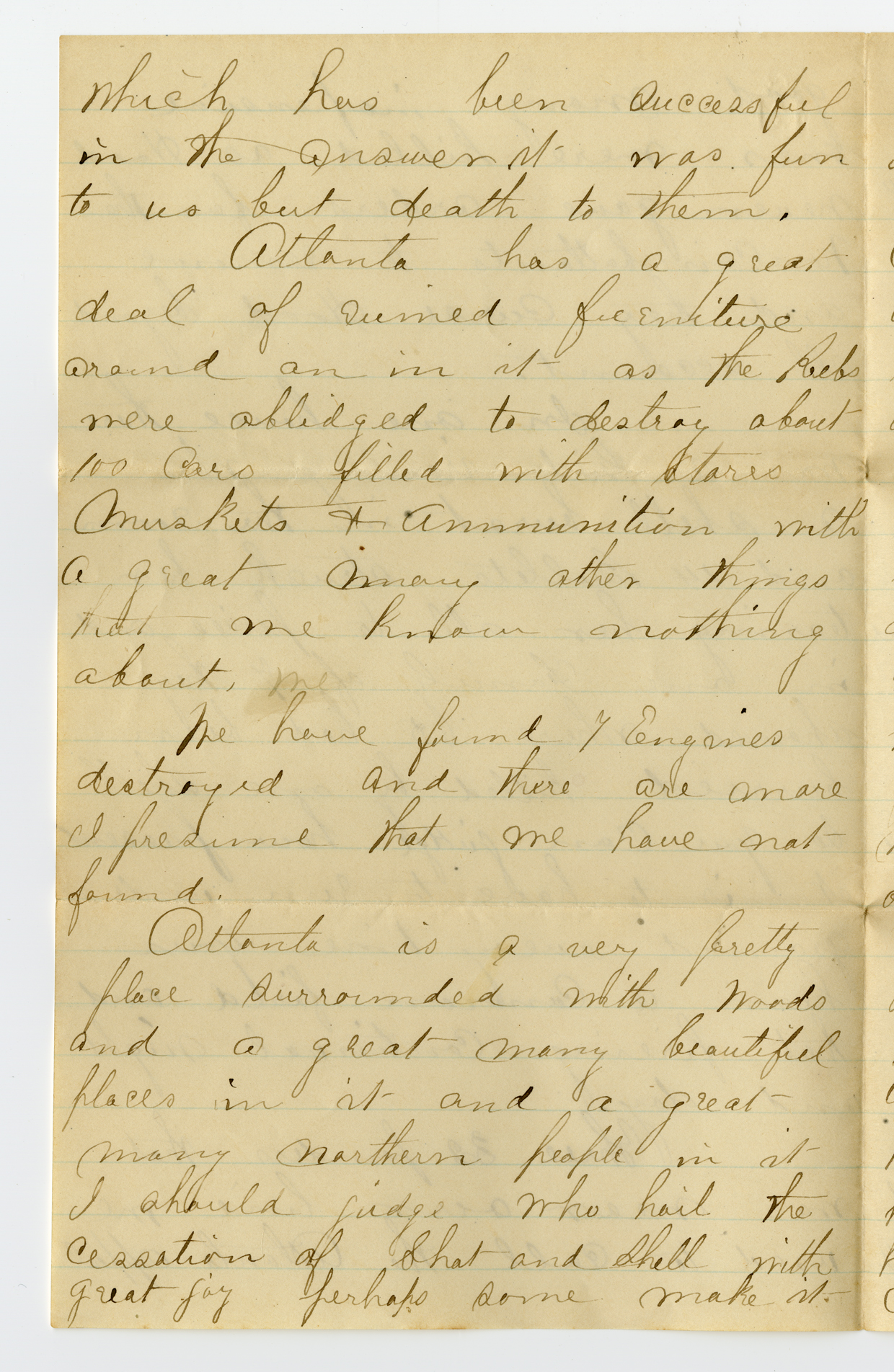 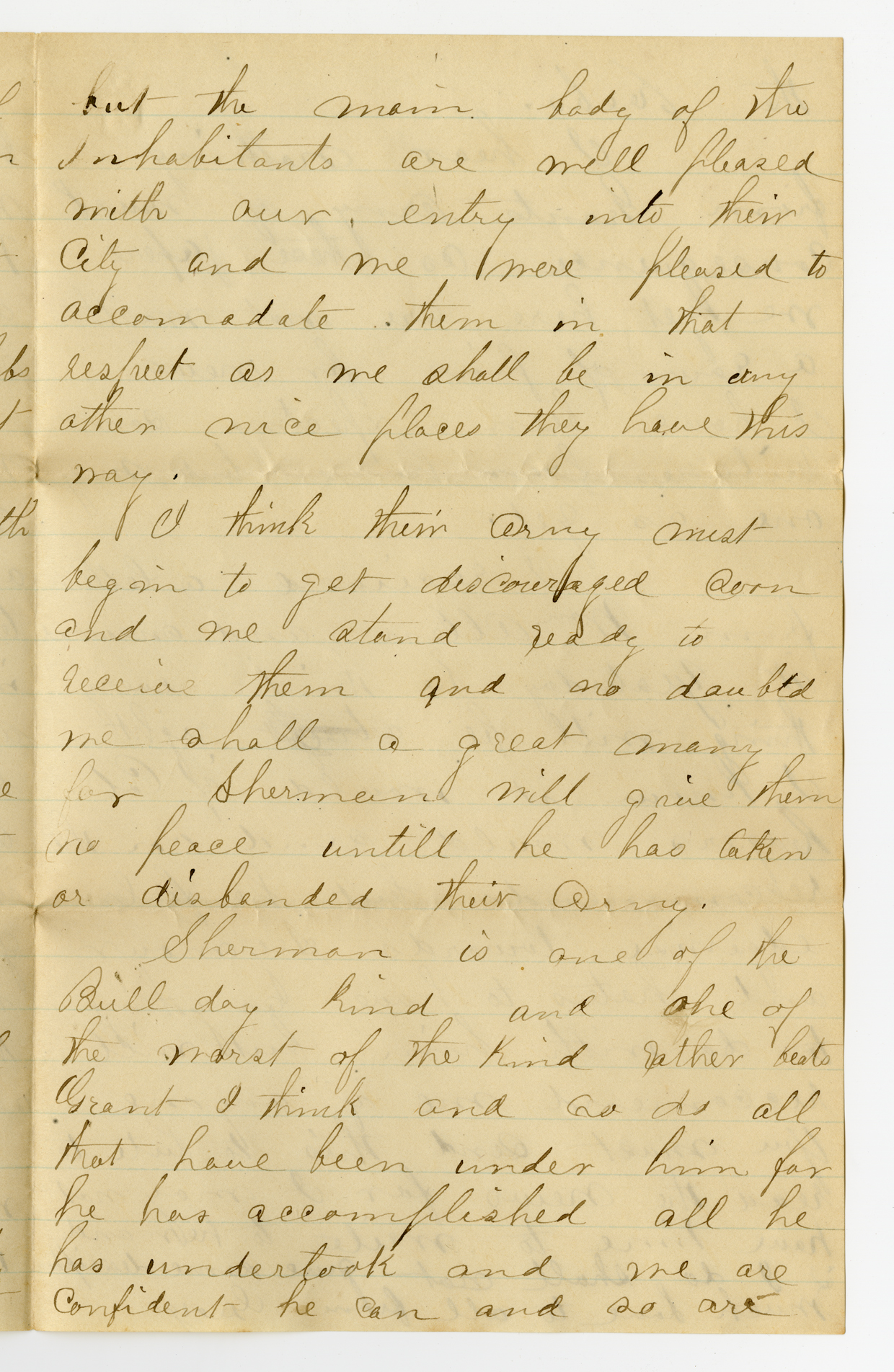 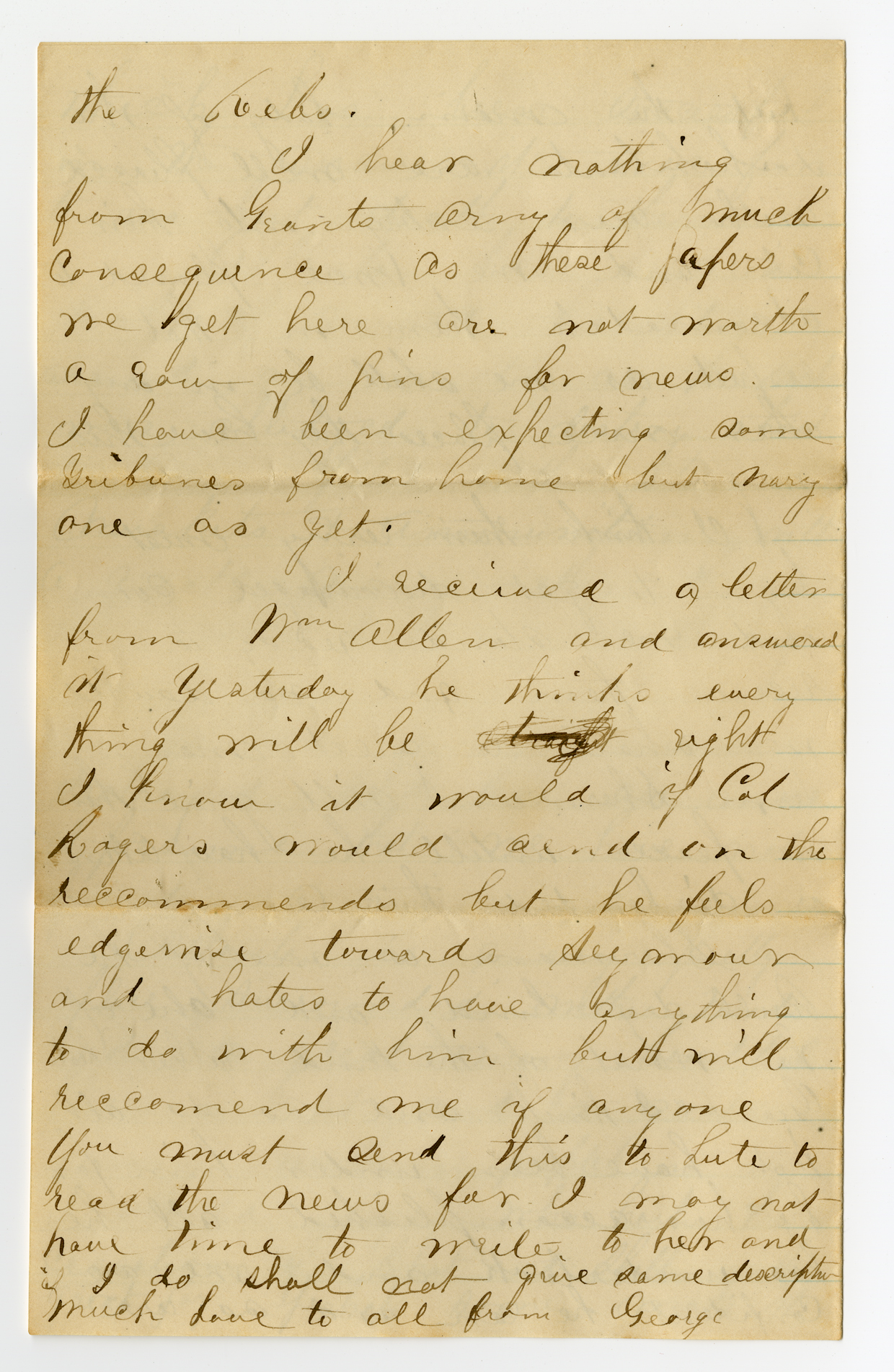 Item Citation: From folder 5 of the George Washington Baker Papers #4909 in the Southern Historical Collection, University of North Carolina at Chapel Hill.

I believe I have written to them all but you and Father and have not succeeded in getting an answer as yet but presume there are some on the way but wish to give you all some information and that is if one waits to get an answer to letters before we write our correspondence will be ?

You will before this reaches you have heard all that is interesting in regard to Atlanta by abler pens than mine but on the supposition that is would be news while I am writing it (you not having heard the news through the papers as yet) concluded to give you a little history.

I did not accompany the expedition owing to cutting my knee which lamed me considerable but have heard a description from the rest.

Two Regiments from each Brigade were ordered out to make an advance on the Enemies lines to see if they were there in force. The Regt advanced to the old line we formerly held where the Rebs seemed to be in some force. Our skirmishes which were 1/2 mile ahead of the Regt advanced on them while the Regt halted and the next we heard was that our skirmishes were in the city and next came General Slocum + staff and General Williams + staff with General Knipe close on their heels and more cunning than the rest as he brought his Brigade Flag with him so our Brigade Flag was the first to be hoisted over the city.

The Regt passed through the city and advanced about 2 miles where we are at present while Sherman is after them with the rest of the army.

Our boys saw and skirmished with their rear Guard and our Cars moved in nearby as quick as we did carrying rations to the Front so you see how expeditious we are in doing ? I passed over the ? and was astonished to see the strength of their marks and was convinced that we could never have taken them by storm first they had 3 row of sharpened stakes then ditches and another row made by boring holes through a log and driving sharpened stakes through it and in some places fixing logs so that they would turn when you tried to get over them.

I found that our shell had torn the city to pieces considerable as on one side of the city most every house had a shell through it and some were completely riddled. A great good many inofensive ones were killed as Hood never gave order for the noncombattants to remove and they curse Hood beyond all account.

In one house there was a girl ironing when a shell burst in the room and 14 bullets struck her tearing her all to pieces and in one family of 7 they showered where 5 had been burried killed by one shell so you can judge how pleasant it is to have to run under ground every time you hear a cannon fired and that firing continued night and day.

Three 32 founders that was near our line we used to call the Atlanta appeal which has been successful in the answer it was fun to us but death to them.

Atlanta has a great deal of ruined furniture around an in it as the Rebs were obliged to destroy about 100 Cars filled with stares muskets + ammunition with a great many other things that we know nothing about.

We have found 7 Engines destroyed and there are more I presume that we have not found.

Atlanta is a very pretty place surrounded with woods and a great many beautiful places in it and a great many northern people in it I should judge who hail the cessation of shot and shell with great joy perhaps some make it but the main body of the inhabitants are well pleased with our entry into their city and we were pleased accommodate them in that respect as we shall be in any other nice place they have this way.

I think their army must begin to get discouraged ? and we stand ready to receive them and no doubt we shall a great many for Sherman will give them no peace until he has taken or disbanded their army.

Sherman is one of the Bull day kind and one of the worst of the kind rather beats Grant I think and so do all that have been under him for he has accomplished all he has undertook and we are confident he can and so are the Rebs.

I hear nothing from Grants army of much consequence as these papers we get here are not worth a ? of fine far news. I have been expecting some tribunes from home but nary one as yet.

I receive a letter from Mr Allen answered it yesterday he thinks every thing will be right. I know it would if Col Rogers would send on reccommends but he feels edgewise towards Seymour and hates to have anything to do with him but will reccomend me if anyone. You must send this to Lute to read the news for I may not have time to write to her and if I do shall not give same description much love to all from George