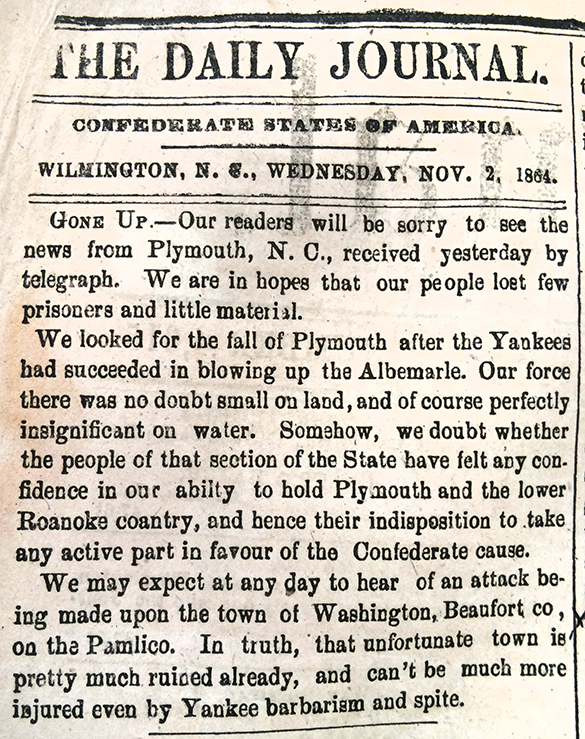 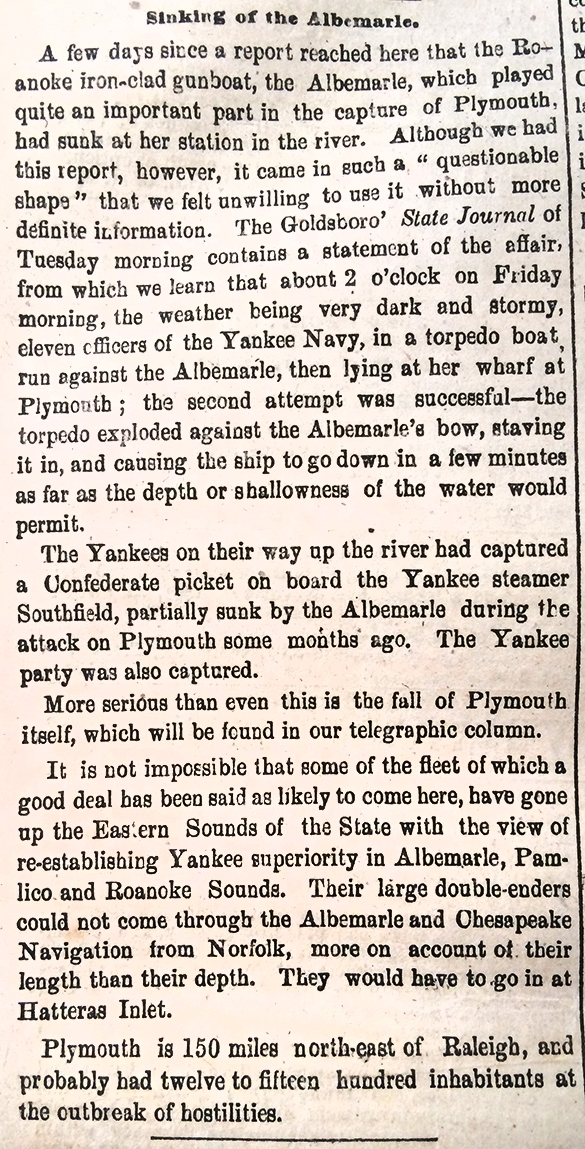 GONE UP.—Our readers will be sorry to see the news from Plymouth, N. C., received yesterday by telegraph. We are in hopes that our people lost few prisoners and little material. We looked for the fall of Plymouth after the Yankees had succeeded in blowing up the Albemarle. Our force there was no doubt small on land, and of course perfectly insignificant on water. Somehow, we doubt whether the people of that section of the State have felt any confidence in our abiity to hold Plymouth and the lower Roanoke country, and hence their indisposition to take any active part in favour of the Confederate cause. We may expect at any day to hear of an attack being made upon the town of Washington, Beaufort co , on the Pamlico. In truth, that unfortunate town is pretty much ruined already, and can’t be much more injured even by Yankee barbarism and spite.

A few days since a report reached here that the Roanoke iron-clad gunboat, the Albemarle, which played quite an important part in the capture of Plymouth. had sunk at her station in the river. Although we had this report, however, it came in such a “questionable shape” that we felt unwilling to use it without more definite information. The Goldsboro’ State Journal of Tuesday morning contains a statement of the affair, from which we learn that about 2 o’clock on Friday morning, the weather being very dark and stormy, eleven officers of the Yankee Navy, in a torpedo boat, run against the Albemarle, then lying at her wharf at Plymouth ; the second attempt was successful—the torpedo exploded against the Albemarle’s bow, staving it in, and causing the ship to go down in a few minutes as far as the depth or shallowness of the water would permit.

The Yankees on their way up the river had captured a Confederate picket on board the Yankee steamer Southfield, partially sunk by the Albemarle during the attack on Plymouth some months ago. The Yankee party was also captured.

More serious than even this is the fall of Plymouth itself, which will be found in our telegraphic column. It is not impossible that some of the fleet of which a good deal has been said as likely to come here, have gone up the Eastern Sounds of the State with the view of re-establishing Yankee superiority in Albemarle, Pamlico and Roanoke Sounds. Their large double-enders could not come through the Albemarle and Chesapeake Navigation from Norfolk, more on account of their length than their depth. They would have to go in at Hatteras Inlet. Plymouth is 150 miles north-east of Raleigh, and probably had twelve to fifteen hundred inhabitants at the outbreak of hostilities.