7 November 1864: “she sent a great deal of love to you and complained that you never wrote to her now.”

Item Description: Letter from William Porter Alexander to his wife.  He discusses aspects of his social life in town as well as his sentiments about arming slaves as soldiers.  Edward Porter Alexander (1835-1910) was an engineer, United States and Confederate army officer, university professor, businessman, and planter. 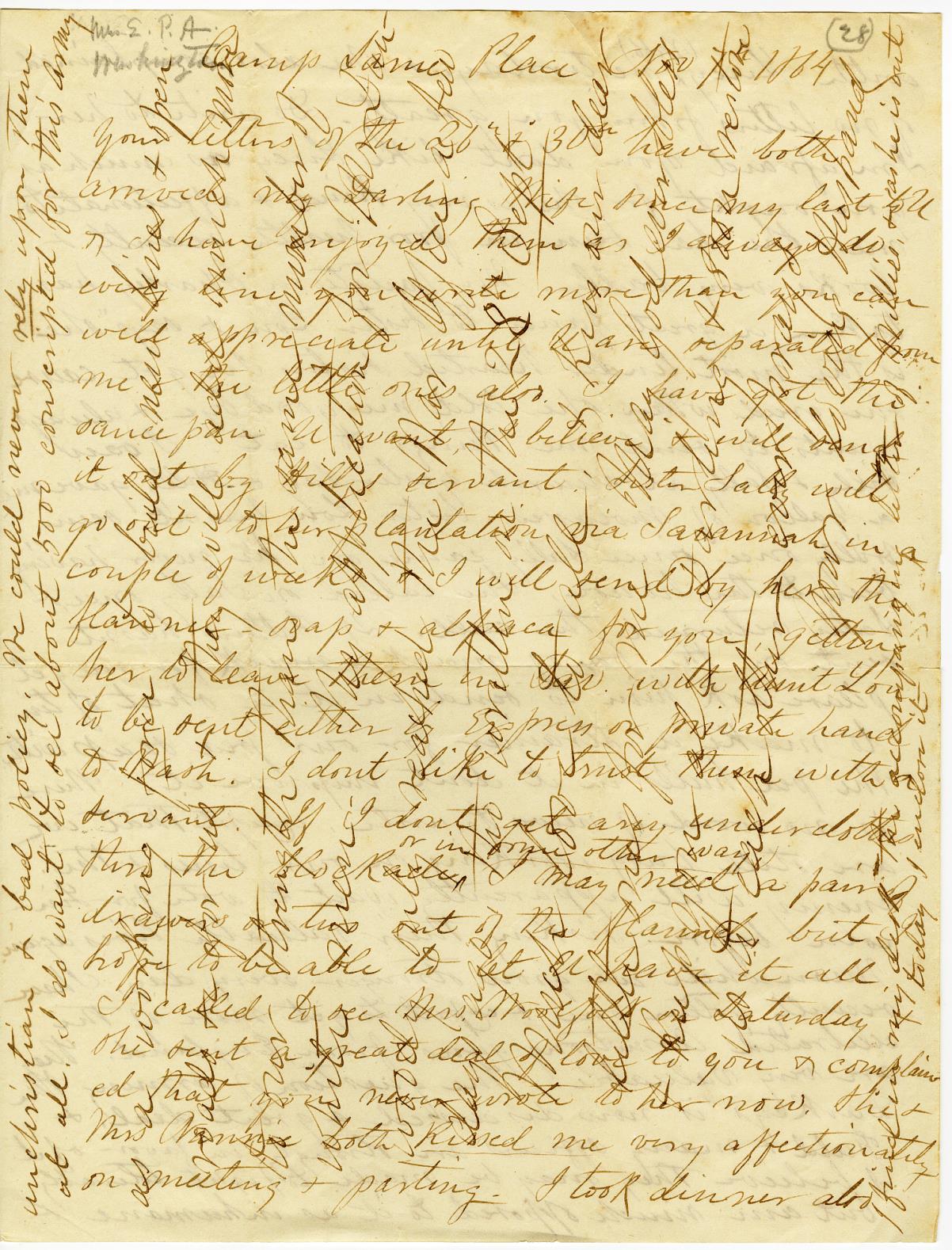 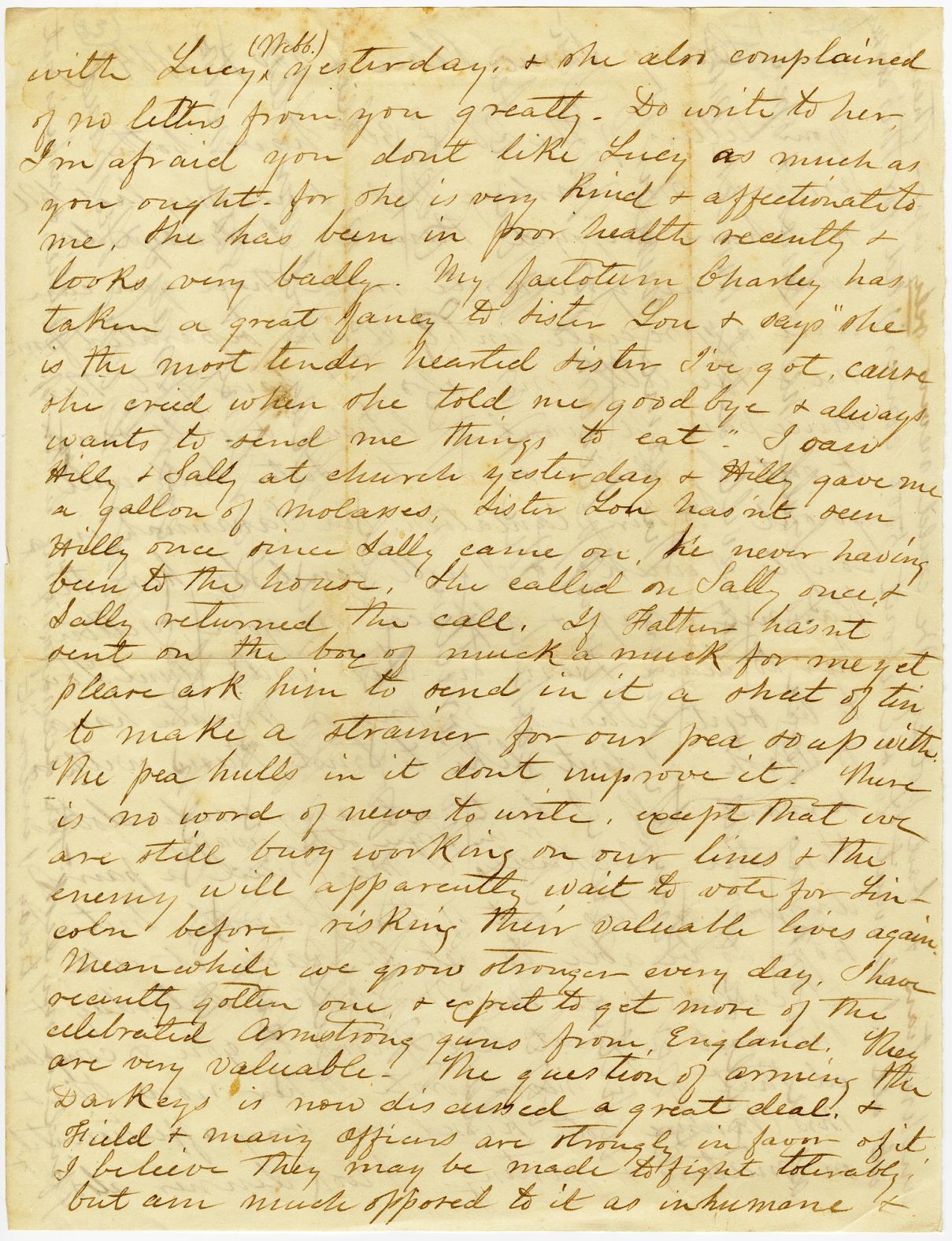 Your letters of the 26th and 30th have both arrived my Darling Wife since My last to U and I have enjoyed them as I always do every line you write more than you can well appreciate until U are separated from me and the little ones also.  I have got the saucepan U want I believe and will send it out by Hilly’s servant.  Sister Sally will go out to her plantation via Savannah in a couple of weeks and I will send by her the flannel, soap, and alpaca for you, getting her to leave them in Sav. with Aunt Lou to be send either by Express or private hand to Nash.  I don’t like to trust them with a servant.  If I don’t get any underclothes thru the blockade or in some other way, I may need a pair of drawers or two out of the flannel but I hope to be able to let U have it all.  I called to see Mrs. Woolfold on Saturday, she sent a great deal of love to you and complained that you never wrote to her now.  She and and Mrs. Nannie both kissed me very affectionately on meeting and parting.  I took dinner also with Lucy (Webb) yesterday and she also complained of no letter from you greatly.  So write to her.  I’m afraid you don’t like Lucy as much as you ought for she is very kind and affectionate to me.  She has been in poor health recently and looks very badly.  My factotum Charley has taken a great fancy to sister Lou and says “she is the most tender hearted sister I’ve got cause she cried when she told me goodbye and always wants to send me things to eat.”  I saw Hilly and Sally at church yesterday and Hilly gave me a gallon of molasses.  Sister Lou hasn’t seen Hilly once since Sally came on, he never having been to the house.    She called on Sally once and Sally returned the call.  If father hasn’t sent on the box of muck a muck for me yet please ask him to send in it a shot of tin to make a strainer for our pea soup with the pea hulls in it don’t improve it.  There is no word of news to write except that we are still busy working on our lines and the enemy will apparently wait to vote for Lincoln before risking their valuable lives again.  Meanwhile we grow stronger every day.  I have recently gotten one and expect to get more of the celebrated Armstrong guns from England.  They are very valuable.  The question of arming the Darkeys is now discussed a great deal and Field and many officers are strongly in favor of it.  I believe they may be made to fight tolerably but am much opposed to it as inhumane and unchristian and bad policy.  We could never rely upon them at all.  I do want to see about 5000 conscripted for this army as a working force to build new lines and open roads for us and they will add much more to our strength than the same number of white men.  My application for Mr. Dunwoody only reached the War Office a few days ago, tho written on the 28th Sept.  Much love to all and kiss our dear little ones for me.  May God ever bless and keep you all Darling and soon return us to each other ever prays.

I find in my desk the accompanying letter of Willie’s and as he is out today I endorse it.