28 November 1864: “We hear sad news from your State which makes us all very miserable about you”

Posted on 28 Nov ’14 by Biff Hollingsworth

Item Description: A letter to Elizabeth Seawell Hairston from her sister, E. Jentmeyer, describing the movements of family and friends within and outside the confederate army. Also, the letter describes some of her daily activities, and her worry for Elizabeth after the burning of Atlanta and Sherman’s march toward Macon. 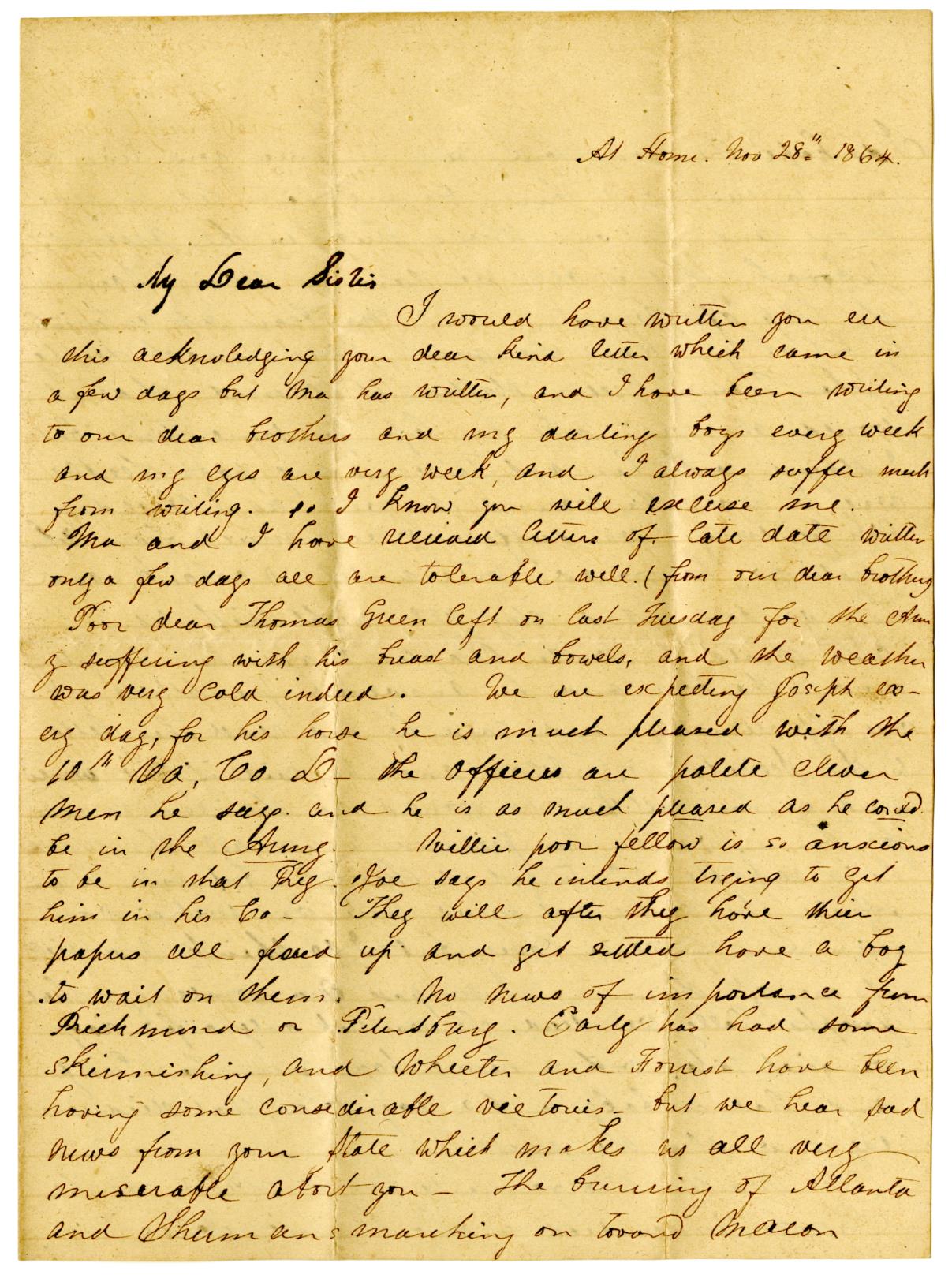 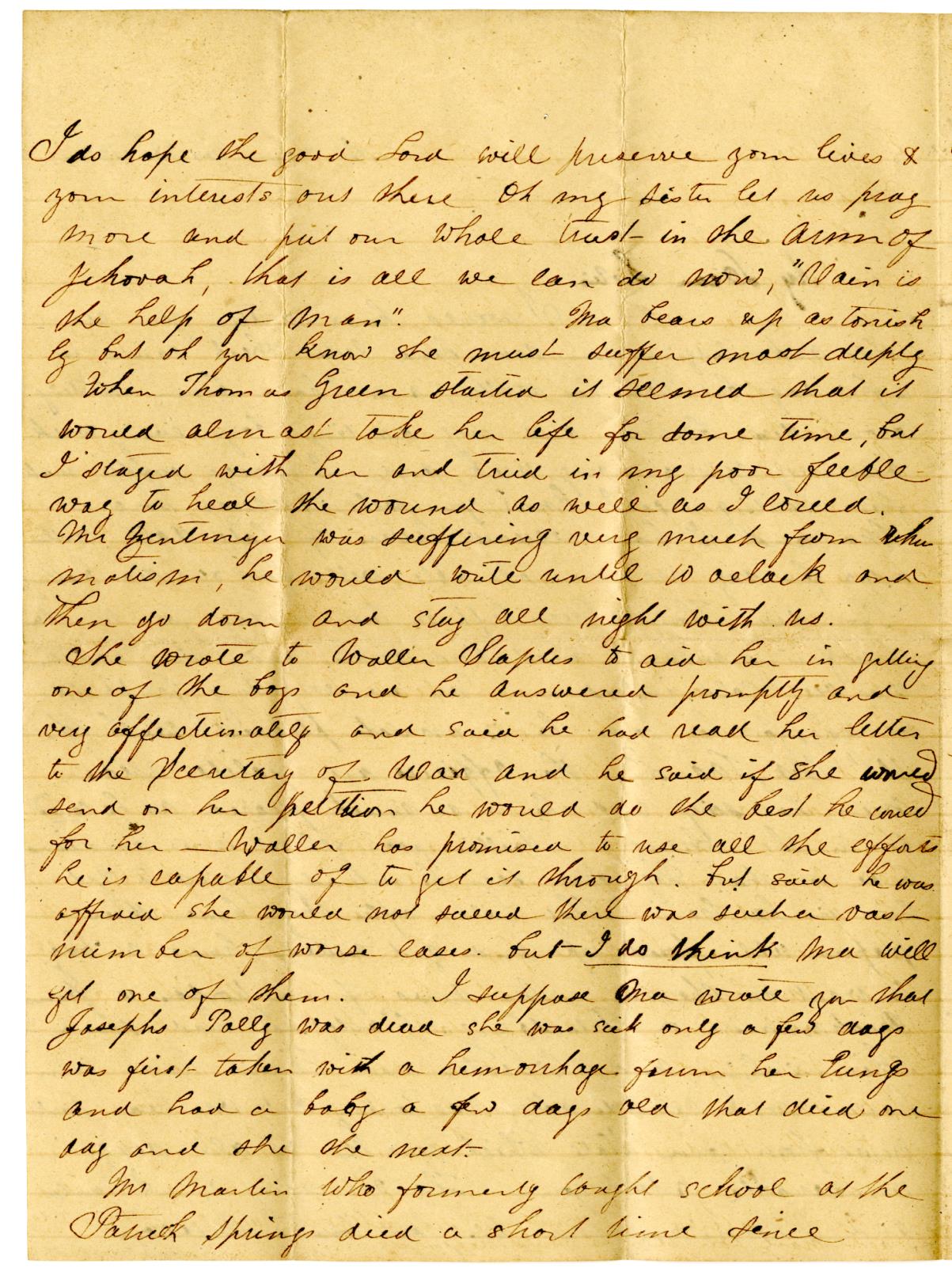 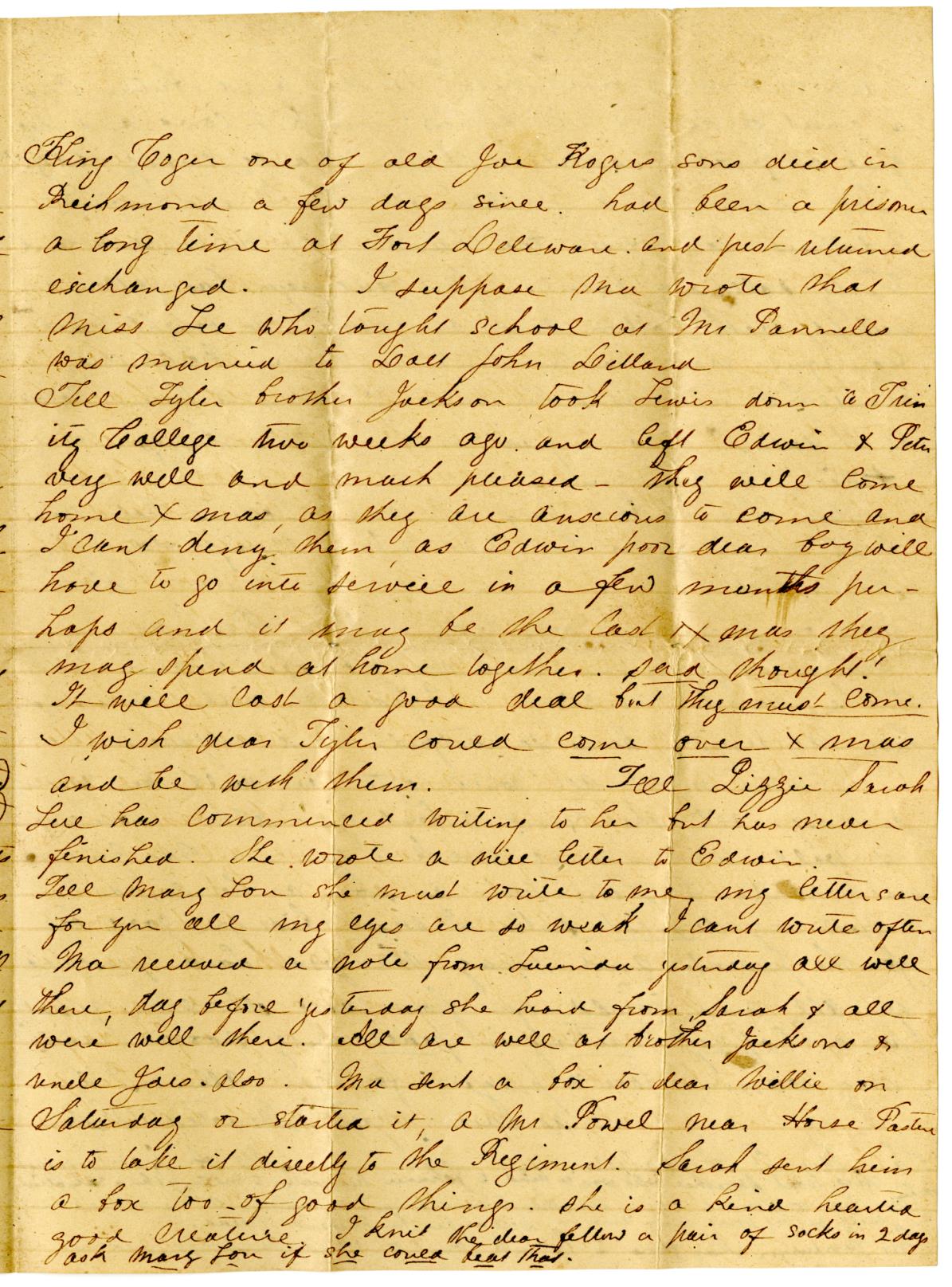 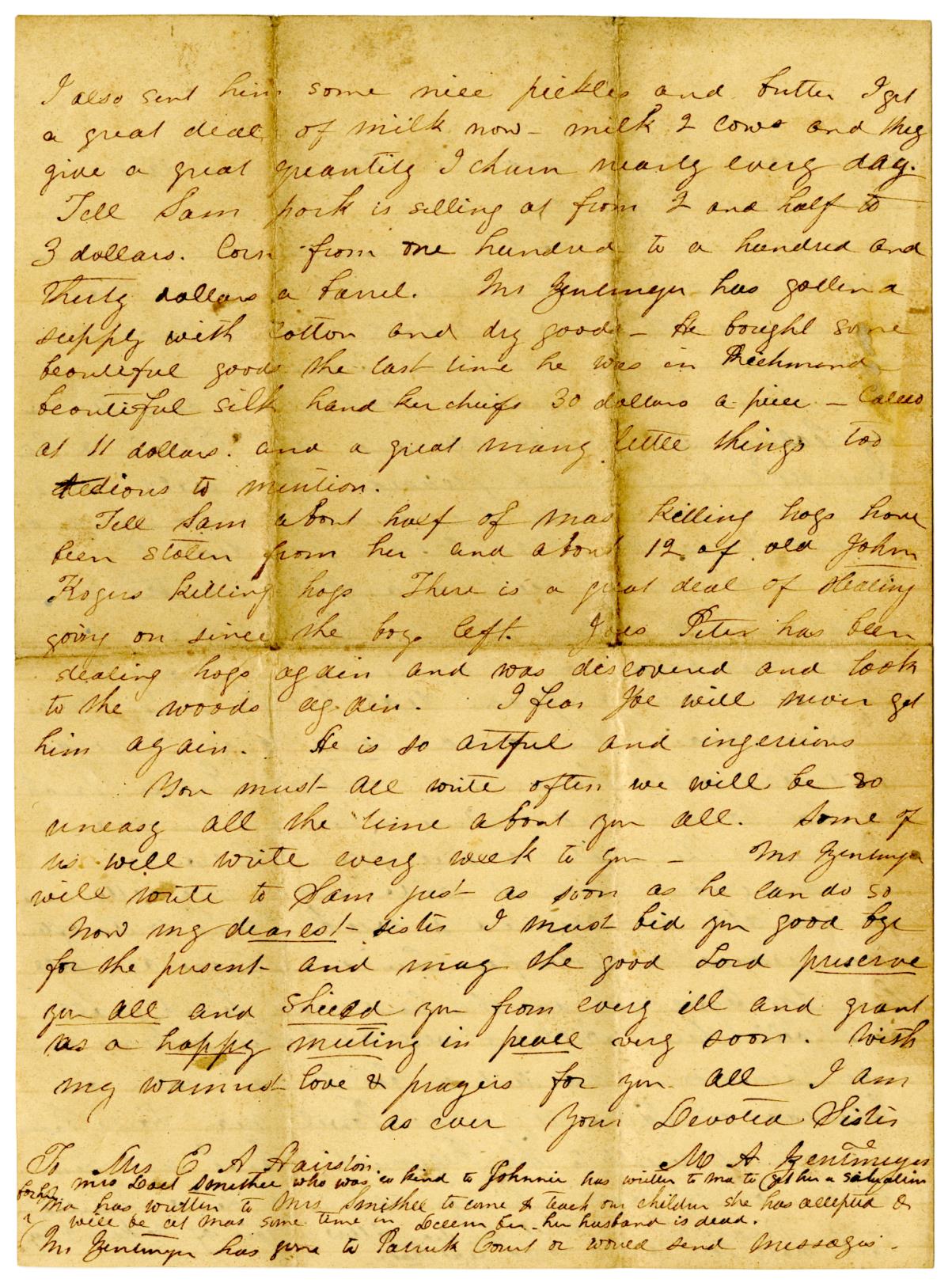 I would have written you all this acknowledging your dear kind letter which came in a few days but Ma has written, and I have been writing to our dear brothers and my darling boys every week and my eyes are very weak, and I always suffer much from writing. so I know you will excuse me. Ma and I have received letters of late date written only a few days all are tolerable well. (From our dear brothers) Poor dear Thomas Green left on last Friday for the Army suffering with his breast and bowels, and the weather was very cold indeed. We are expecting Joseph every day, for his horse he is much pleased with the tenth Va, Co. D — The Officers are polite clever men he says and he is as much pleased as he could be in the Army. Willie poor fellow is so anxious to be in that Reg. Joe says he intends trying to get him in his Co. They will after they have their papers all served up and get settled have a boy to wait on them. No news of importance from Richmond or Petersburg. Early has had some skirmishing and Wheeler and Forest have been having some considerable victories but we hear sad news from your State which makes us all very miserable about you– the burning of Atlanta and Sherman’s marching on toward Macon.

I do hope the good Lord will preserve your lives & your interests out there. Oh my Sister, let us pray more and put our whole trust in the arm of Jehovah, that is all we can do now, “Vain is the help of man.”

Ma bears up astonishingly, but oh you know she must suffer most deeply. When Thomas Green started it seemed that it would almost take her life for some time, but I stayed with her and tried in my poor feeble way to heal the wound as well as I could Mr. Jentmeyer was suffering very much from rheumatism, he would write until 10 oclock and then go down and stay all night with us.

She wrote Waller Staples to aid her in getting one of the boys and he answered promptly and very affectionately and said he had read her letter to the Secretary of War and he said if she would send on her petition. He would do the best he could for her—Waller has promised to use all the efforts he is capable of to get it through, but said he was afraid she would not succeed there was such a vast number of worst cases but I do think Ma will get one of them.

I suppose Ma wrote you that Joseph’s Polly was dead she was sick only a few days was first taken with a hemorrhage from her lungs and had a baby a few days old that died one day and she the next.

Mr. Marin who formally taught school at the Panuck Springs died a short time since. King Coger one of old Joe Rogers sons died in Richmond a few days since. had been a prisoner a long time at Fort Deleware and just returned exchanged. I suppose she wrote that Miss Lee who taught school at Mr Panelle’s was married to ? John Dillard

Tell Tyler brother Jackson took Lois down to Trinity College two weeks ago and left Edwin & Peter very well and much pleased–They will come home xmas as they are anxious to come and I can’t deny them, as Edwin poor dear boy will have to go into service a few months perhaps and it may be the last xmas they may spend together. Sad thought! It will cost a good deal but they must come. I wish dear Tyler could come over xmas and be with them.

Tell Lizzie Sarah Lee has commenced writing to her but has never finished. She wrote a nice letter to Edwin. Tell Mary Lou she must write to me, my letters are for you all my eyes are so weak I can’t write often. Ma received a note from Lucinda yesterday all well there, day before yesterday she heard from Sarah & all were well there. All are well at brother Jacksons & Uncle Joe also.

Ma sent a box to dear Willie on Saturday or started it. A Mr. Powel near Horse Pasture is to take it directly to the Regiment. Sarah sent him a box too of good things. She is a kind hearted good creature. I knit the dear fellow a pair of socks in two days ask Mary Lou if she could beat that.

I also sent him some nice Pickles and butter I get a great deal of milk now– milk two cows and they give a great quantity I churn nearly every day. Tell Sam pork is selling at from 2 and half to 3 dollars. Corn from one hundred to a hundred and thirty dollars a barrel. Mr. Jetmeyer has gotten a supply with cotton and dry goods – he bought some beautiful goods the last time he was in Richmond beautiful silk handkerchiefs 30 dollars a piece – calico at 11 dollars and a great many little things too tedious to mention.

Tell Sam about half of the mas killing hogs have been stolen from her and about 12 of old John Roger’s killing hogs. There is a great deal of stealing going on since the boys left. Joes Peter has been stealing hogs again and was discovered and took to the woods again. I fear Joe will never get him again. He is so artful and ingenious

You must all write often we will be so uneasy all the time about you all. Some of us will write every week to you- Mr. Jentmeyer will write to Sam just as soon as he can do so now my dearest sister I must bid you good bye for the present- and may the good Lord preserve you all and shield you from every ill and grant us a happy meeting in peace very soon. With my warmest love & prayers for you all. I am as ever Your devoted Sister

To Mrs E A Hairston

Mrs ? Somether who was so kind to Johnnie has written to me to get her a situation for her. Ma has written to Mrs. Somether to come & teach our children she has accepted & will be at Mas some time in December- her husband is dead. Mr Jentmeyer has gone to Patrick Court or would send messages.