9 December 1864: ” we keep very warm and comfortable as this is a small church and has a large fireplace at each end.”

Item Description: Letter from John W. Davis to his mother.  He describes his efforts to find his unit, the Topographical Engineers, around Wytheville, VA.  He also describes his unit’s camp in a church in Wytheville. 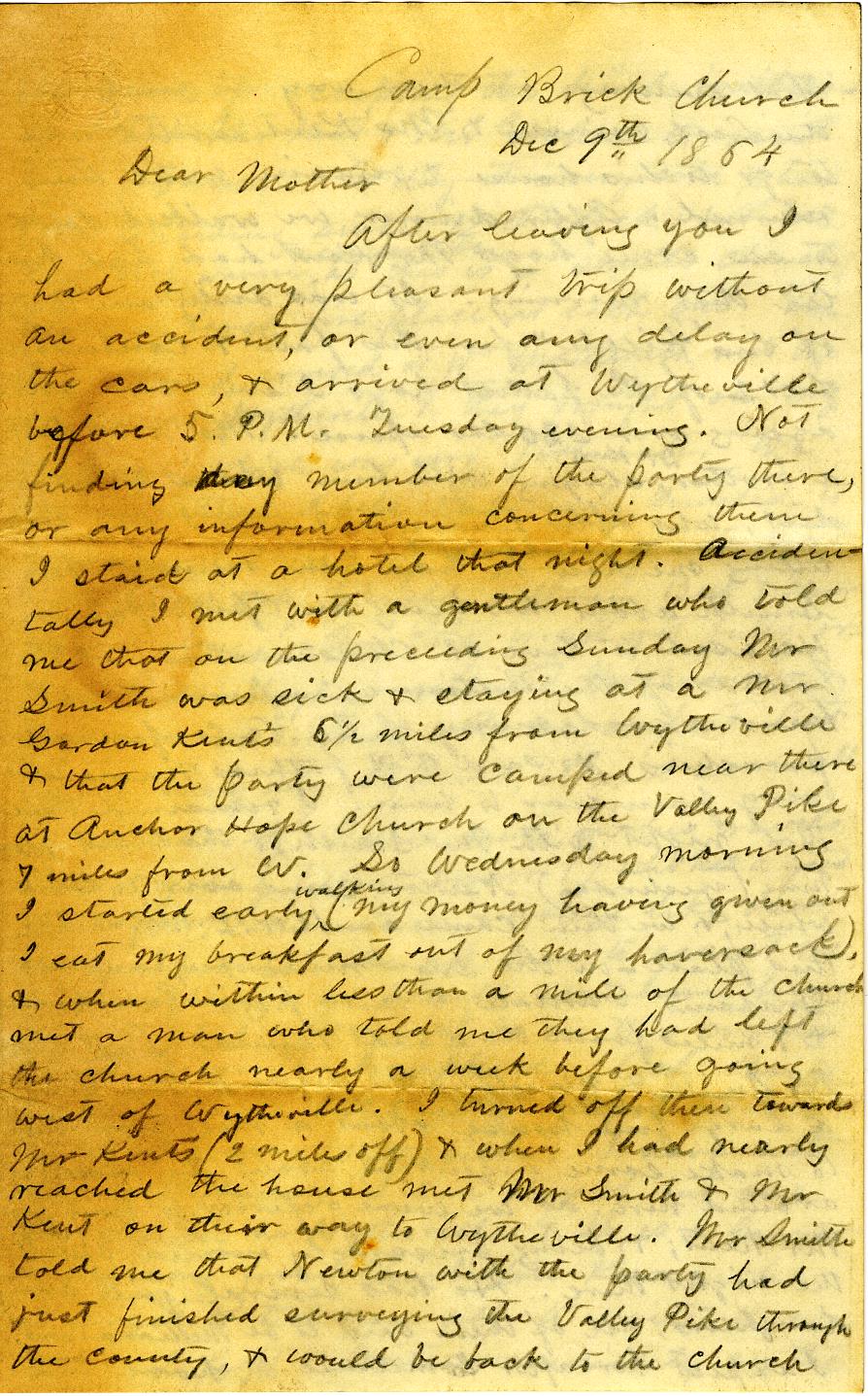 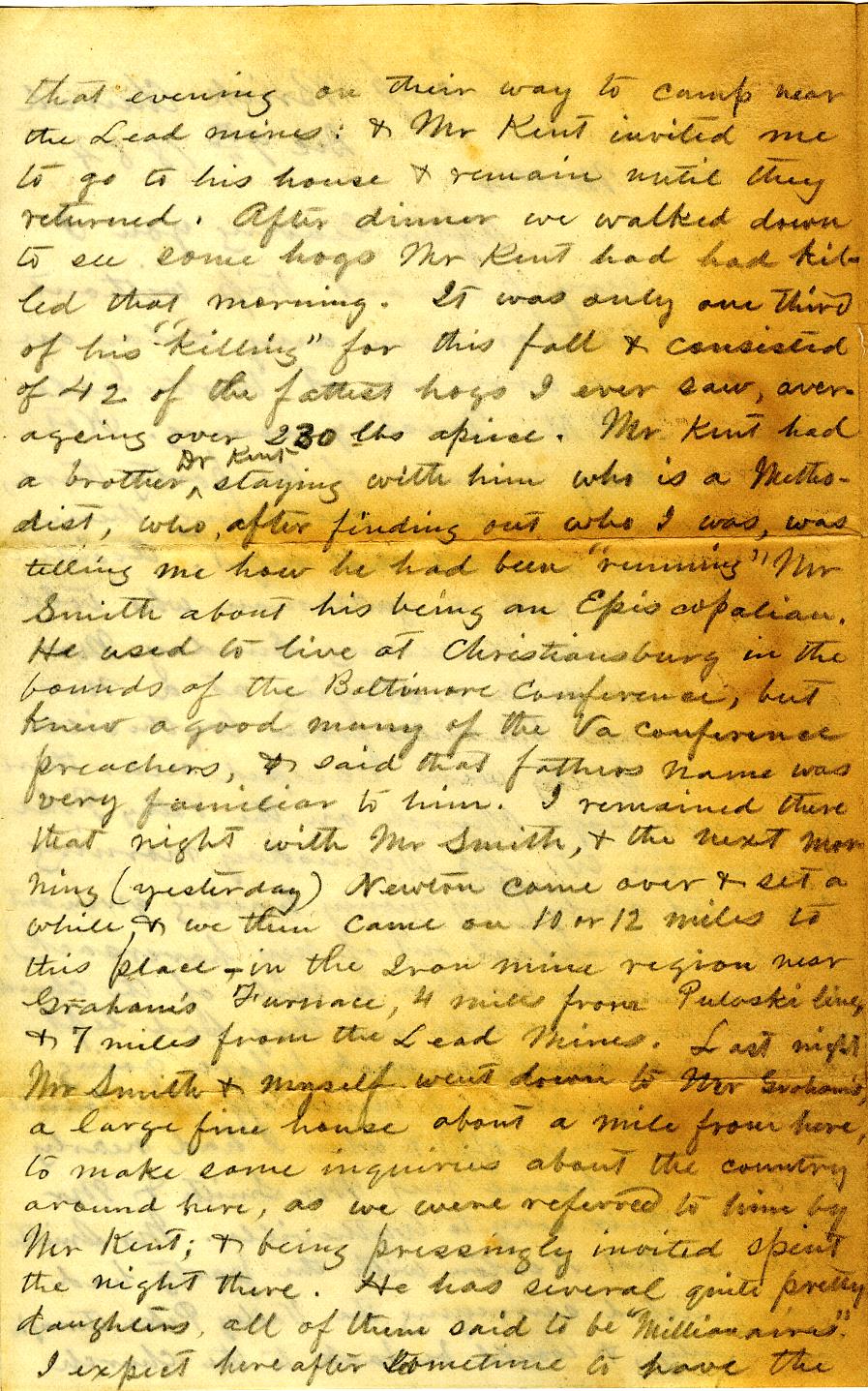 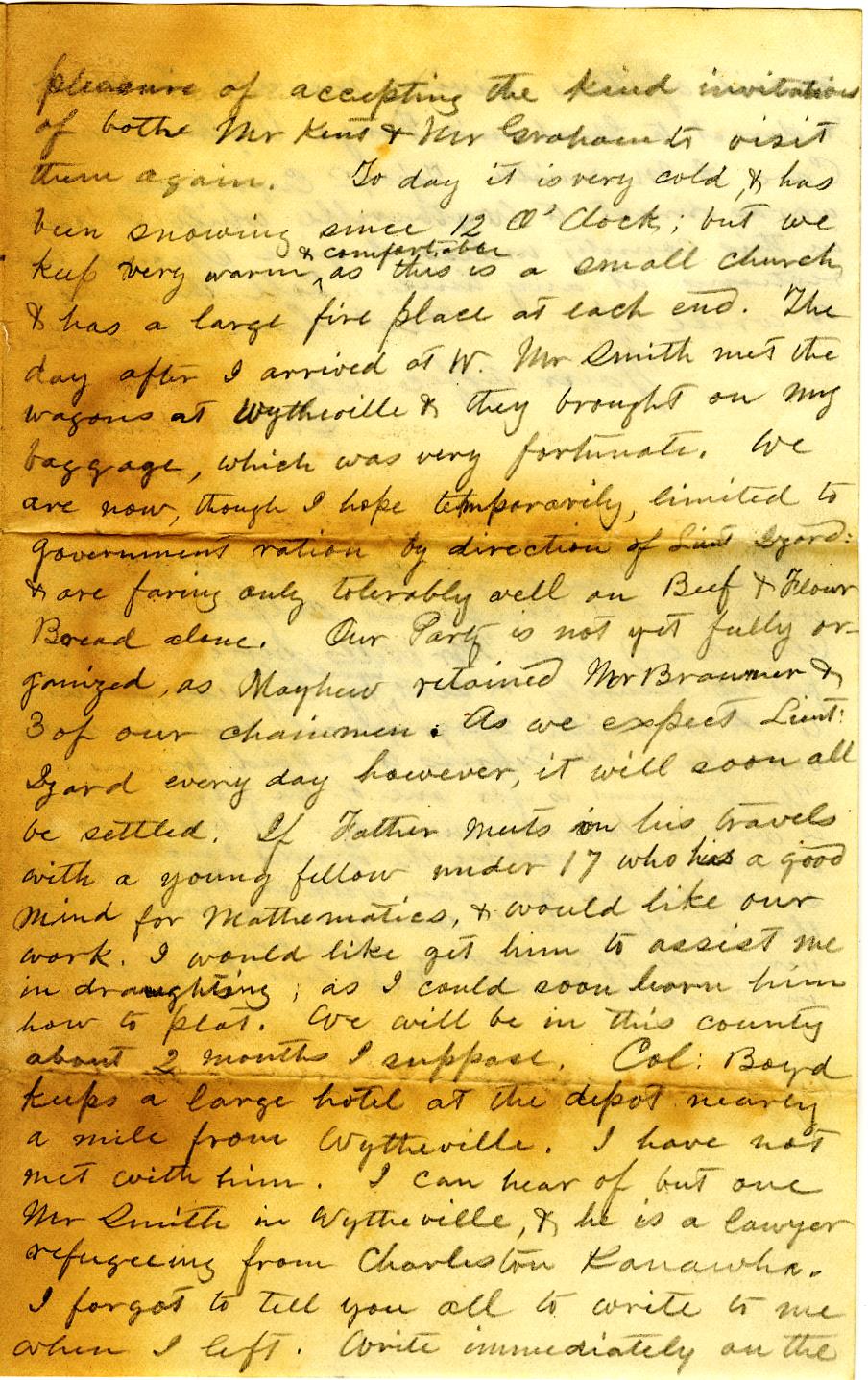 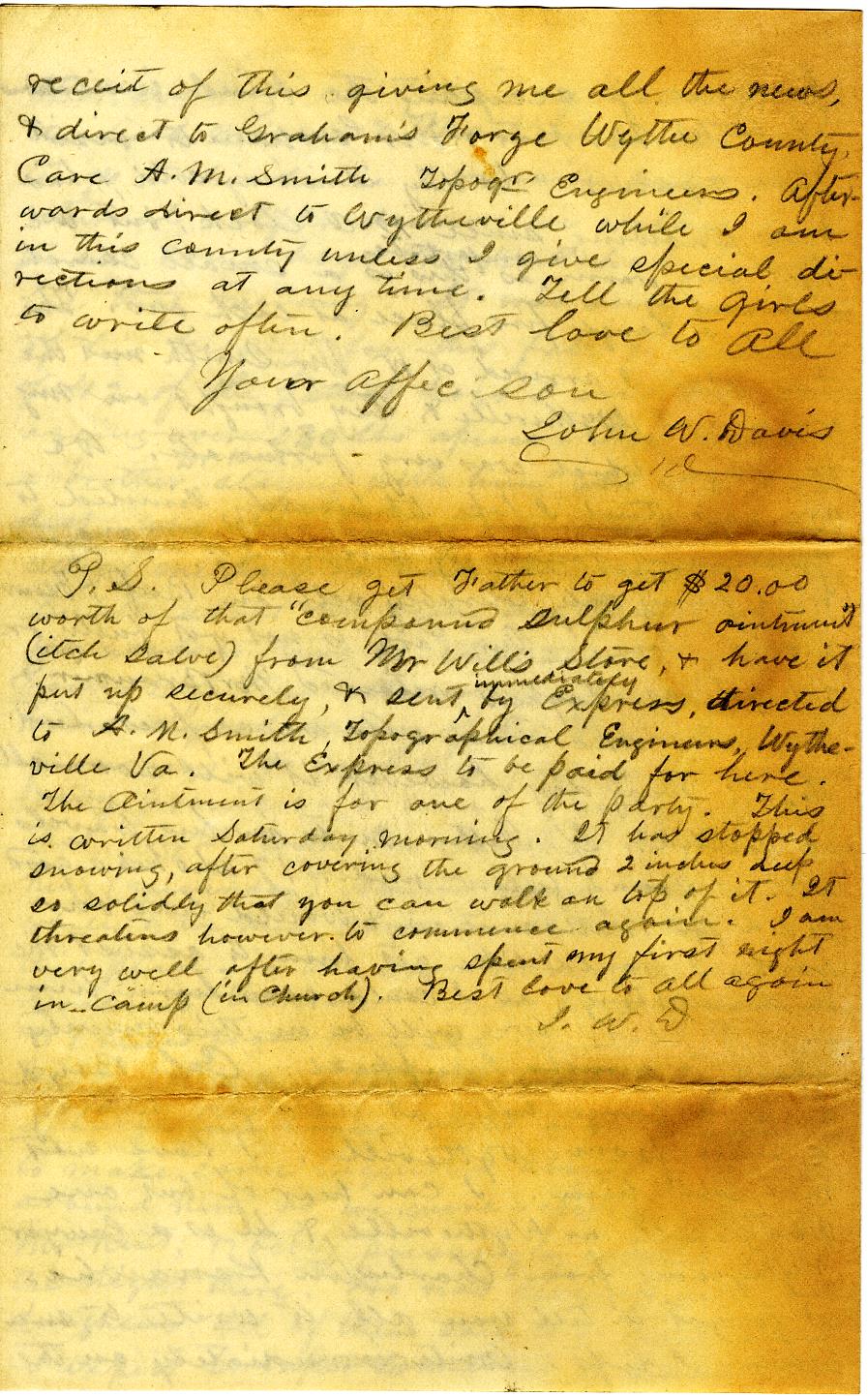 After leaving you I had a very pleasant trip without an accident, or even any delay on the cars, and arrived at Wytheville before 5 P.M. Tuesday evening. Not finding any member of the party there, or any information concerning them I staid at a hotel that night, Accidentally I met with a gentleman who told me that on the preceeding Sunday Mr Smith was sick and staying at a Mr Gordon Kent’s 6 1/2 miles from Wytheville and that the party were camped near there at Anchor Hope Church on the Valley Pike 7 miles from W. So Wednesday morning I started early walking (my money having given out I eat my breakfast out of my haversack), and when within less than a mile of the church met a man who told me they had left the church nearly a week before going west of Wytheville. I turned off then towards Mr Kent’s (2 miles off) and when I had nearly reached the house met Mr Smith and Mr Kent on their way to Wytheville. Mr Smith told me that Newton with the party had just finished surveying the Valley Pike through the county, and would be back to the church that evening on their way to camp near the Lead mines: and Mr Kent invited me to go to his house and remain until they returned. After dinner we walked down to see some hogs Mr Kent had had killed that morning. It was only one third of his “killing” for this fall and consisted of 42 of the fattest hogs I ever saw, overageing over 230 lbs apiece. Mr Kent had a brother Dr Kent staying with him who is a Methodist, who after finding out who I was was telling me how he had been “running” Mr Smith about his being an Episcopalian. He used to live at Christiansburg in the bounds of the Baltimore Conference, but knew a good many of the Va conference preachers, and said that father’s name was very familiar to him. I remained there that night with Mr Smith, and the next morning (yesterday) Newton came over and sit a whill and we then came on 10 or 12 miles to this place- in the iron mine region near Graham’s Furnace, 4 miles from Pulaski line, and 7 miles from the Lead Mines. Last night Mr Smith and myself went down to Mr Graham’s, a large fine house about a mile from here, to make some inquiries about the country around here, as we were referred to him by Mr Kent; and being pressingly invited spent the night there. He has several quite pretty daughters, all of them said to be “Millionaires.” I expect here after sometime to have the pleasure of accepting the kind invitations of both Mr Kent and Mr Graham to visit them again. Today it was very cold, and has been snowing since 12 o’clock; but we keep very warm and comfortable as this is a small church and has a large fireplace at each end. The day after I arrived at W, Mr Smith met the wagons at Wytheville and they brought on my baggage, which was very fortunate. We are now, though I hope temporarily limited to government ration by direction of Lieut. Izard: and are fairing only tolerably well on Beef and flour Bread alone. Our Party is not yet fully organized as Mayhew retained Mr Brauner and 3 of our chairmen. As we expect Lieut. Izard every day however, it will soon all be settled. If Father meets in his travels with a young fellow under 17 who has a good mind for mathematics, and would like our work, I would like get him to assist me in draughting; as I could soon learn him how to plot. We will be in this country about 2 months I suppose. Col Boyd keeps a large hotel at the depot nearly a mile from Wytheville. I have not met with him. I can hear of but one Mr Smith in Wytheville, and he is a lawyer refugeeing from Charleston Kanawha. I forgot to tell you all to write me when I left. Write immediately on the receit of this giving me all the news, and direct to Graham’s Forge Wythe County, care A.M. Smith Topogr Engineers. Afterwards direct to Wytheville while I am in this county unless I give special directions at any time. Tell the girls to write often. Best love to all.

P.S. Please get Father to get $20.00 worth of that “compound sulphur ointment” (itch salve) from Mr Will’s store and have it put up securely, and sent immediately by Express, directed to A.M Smith, Topographical Engineers, Wytheville Ba. The Express to be paid for here. The Ointment is for one of the party. This is written Saturday morning. It has stopped snowing, after covering the ground 2 inches deep so solidly that you can walk on top of it. It threatens however to commence again. I am very well after having my first night in camp (in church). Best love to all again