30 December 1864: “Our expedition so far has been attended with the most complete success. The Rebels having lost Savannah…”

Posted on 30 Dec ’14 by Rebecca Williams

Item Description: Letter dated 30 December 1864 from Jonathan L. Whitaker to his wife Julia A. Wells Whitaker. Jonathan L. Whitaker was a physician from Orange County, N.Y. He served as a United States Army surgeon at a hospital at Chester, Pa., and with the 26th United States Colored Troops near Beaufort, S.C. He writes about increasing Confederate losses and African American men and women coming into the Union camps as contraband. 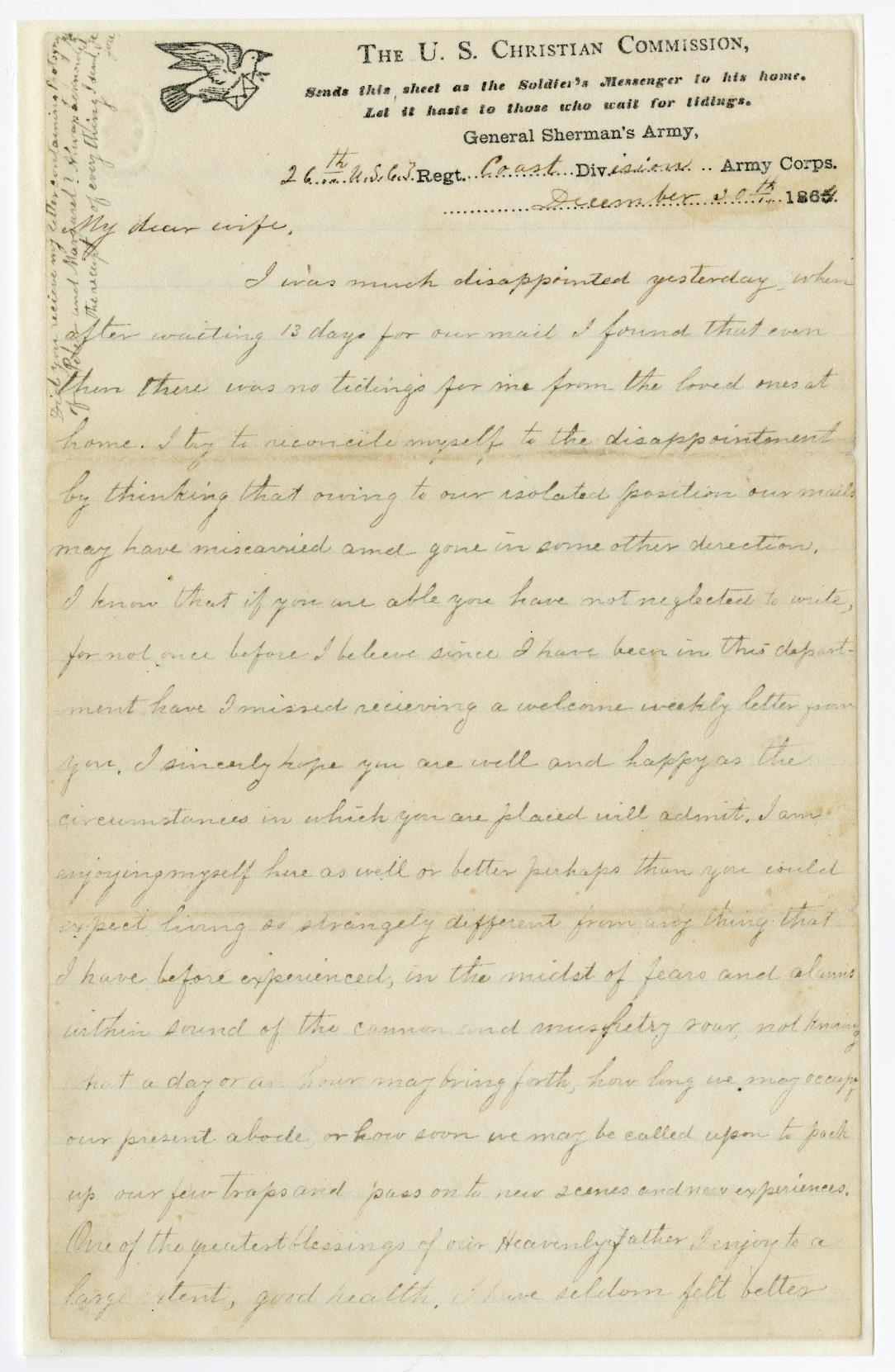 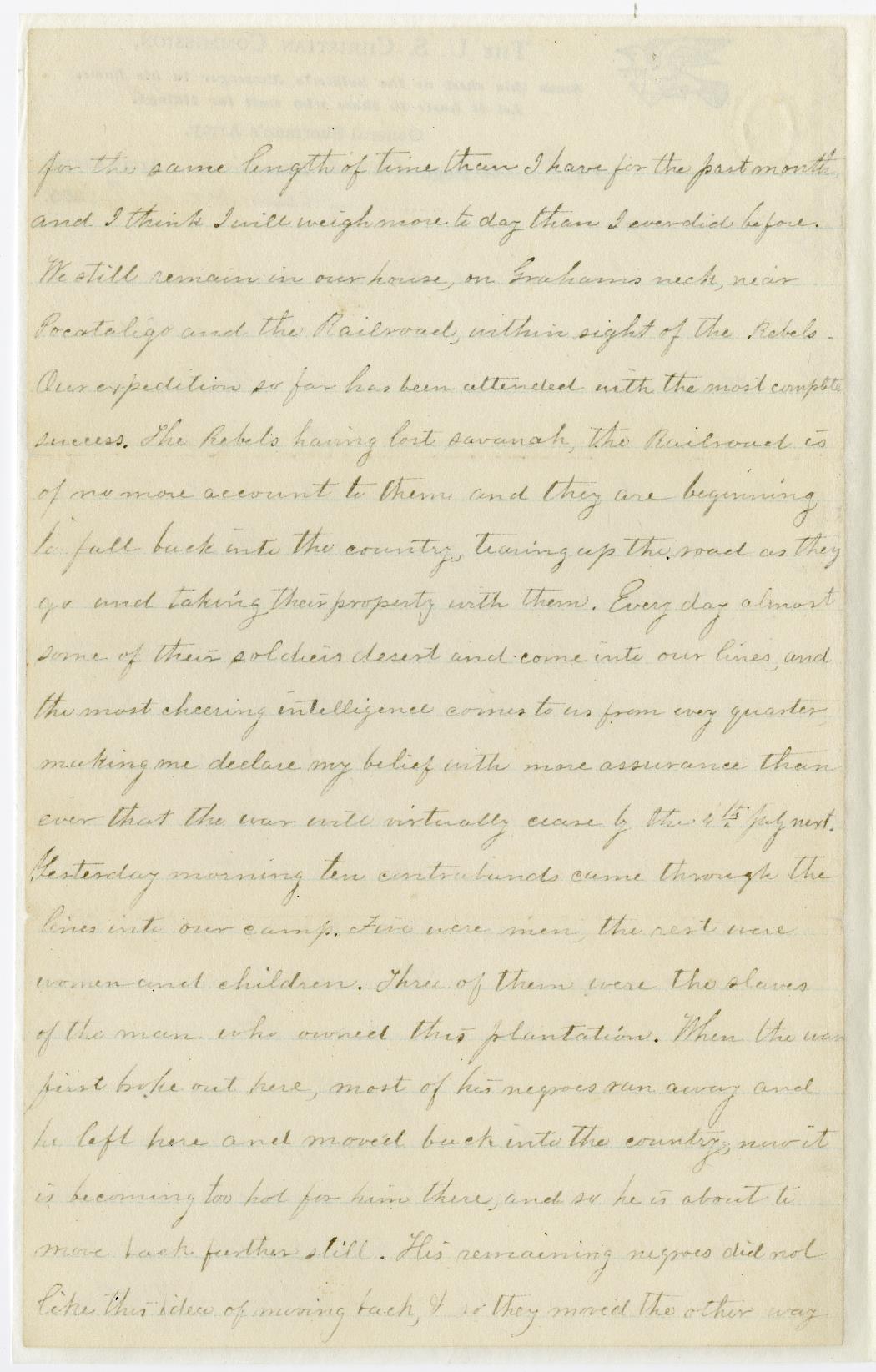 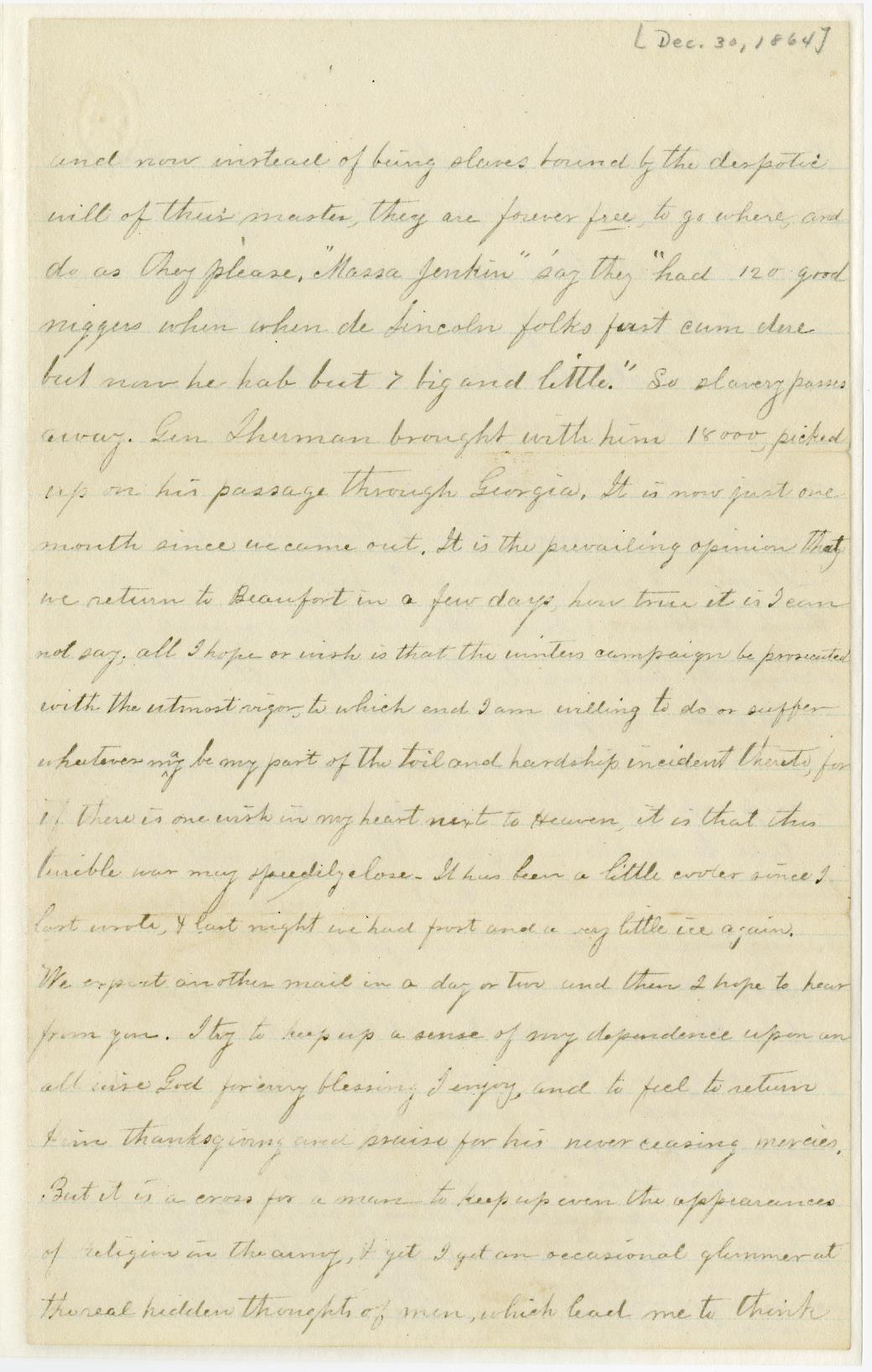 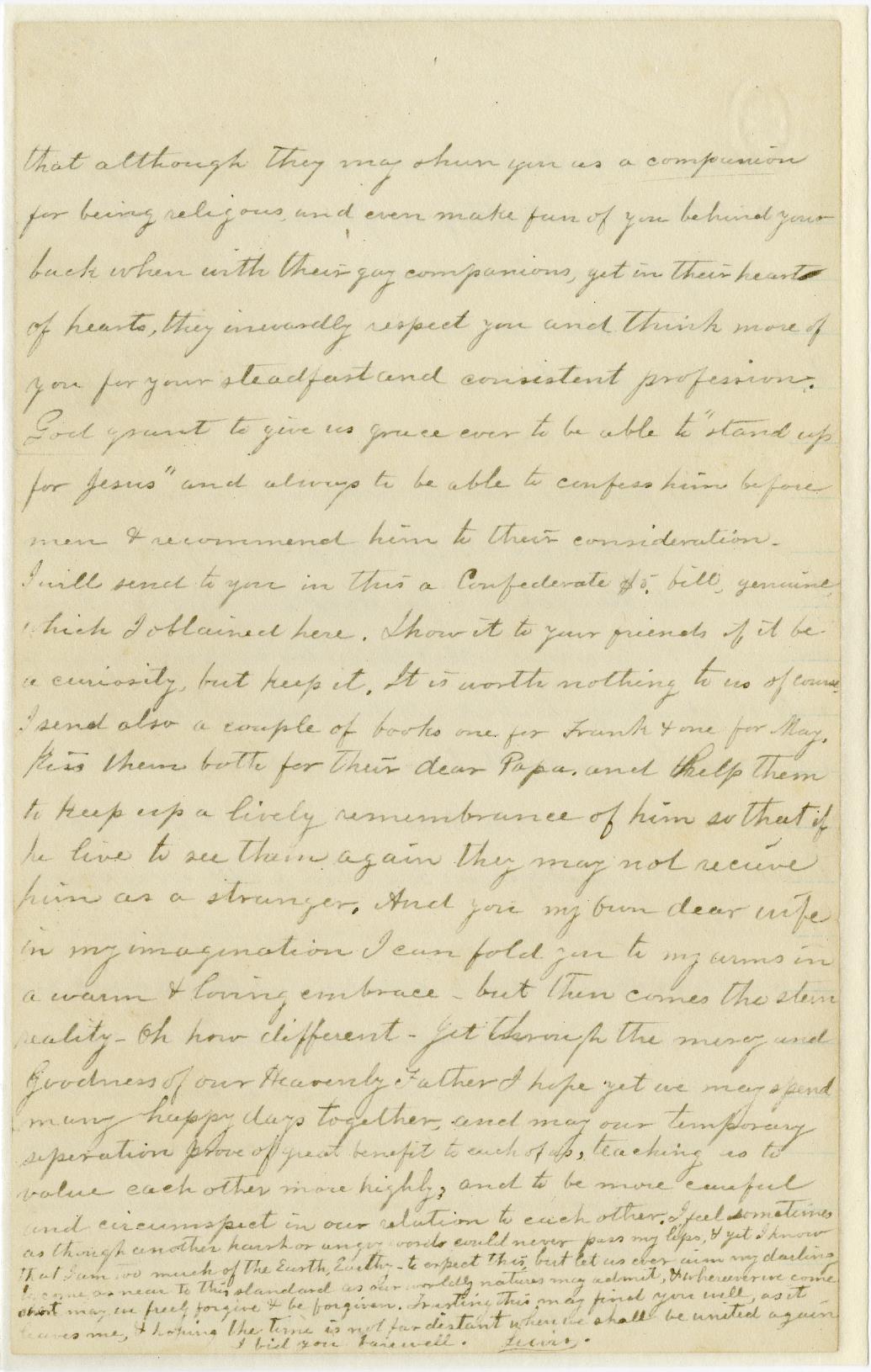 Sends this sheet as the Soldier’s Messenger to his home.

Let it haste to those who wait for tidings.

I was much disappointed yesterday when after waiting 13 days for our mail I found that even then there was no tidings for me from the loved ones at home. I try to reconcile myself to the disappointment by thinking that owing to our isolated position our mail may have miscarried and gone in some other direction. I know that if you are able you have not neglected to write, for not once before I believe since I have been in this department have I missed receiving a welcome weekly letter from you. I sincerely hope you are well and happy as the circumstances in which you are placed will admit. I am enjoying myself here as well or better perhaps than you could expect living so strongly different from any thing that I have before experienced, in the midst of fears and alarms within sound of the cannon and musketry now, not knowing what a day or an hour may bring forth, how long we may occupy our present abode, or how soon we may be called upon to pack up our few traps and pass on to new scenes and new experiences. One of the greatest blessings of our Heavenly Father I enjoy to a large extent, good health. I have seldom felt better for the same length of time than I have for the past month and I think I will weigh more today than I ever did before. We still remain in our house, on Grahams neck, near Pocotaligo and the Railroad, within sight of the Rebels. Our expedition so far has been attended with the most complete success. The Rebels having lost Savannah, the Railroad is of no more account to them and they are beginning to fall back into the country, tearing up the road as they go and taking their property with them. Every day almost some of their soldiers desert and come into our lines, and the most cheering intelligence comes to us from every quarter, making me declare my belief with more assurance than ever that the war will virtually cease by the 4th July next. Yesterday morning ten contrabands came through the lines into our camp. Five were men, the rest were women with children. Three of them were the slaves of the man who owned this plantation. When the war first broke out here, most of his negroes ran away and he left here and moved back into the country, now it is becoming too hot for him there, and so he is about to move back further still. His remaining negroes did not like the idea of moving back, + so they moved the other way and now instead of being slaves bound by the despotic will of their master, they are forever free, to go where and do as they please, “Massa Jenkin” say they “had 120 good niggers when when do Lincoln folks fast cum close but now he hab but 7 big and little.” So slavery passes away. Gen Sherman brought with him 18000 picked up on his passage through Georgia. It is now just one month since we came out. It is the prevailing opinion that we return to Beaufort in a few days how true it is I can not say, all I hope or wish is that the winter campaign be prosecuted with the utmost vigor, to which end I am willing to do or suffer whatever may be my part of the toil and hardship incident thereto, for if there is one wish in my heart next to Heaven, it is that this terrible war may speedily close. It has been a little cooler since I last wrote, + last night we had frost and ice again. We expect another mail in a day or two and then I hope to hear from you. I try to keep up a sense of my dependence upon an all wise God for every blessing I enjoy, and to feel to return Him thanksgiving and praise for his never ceasing mercies. But it is a cross for a man to keep up even the appearances of religion in the army, + yet I get an occasional glimmer at the real hidden thoughts of men, which lead me to think that although they may shun you as a companion for being religious and even make fun of you behind your back when with their gay companions, yet in their heart of hearts, they inwardly respect you and think more of you for your steadfast and consistent profession. God grant to give us grace ever to be able to “stand up for Jesus” and always be able to confess him before men I recommend him to their consideration.

I will send to you in this a Confederate $5 bill, genuine which I obtained here. Show it to your friends if it be a curiosity, but keep it. It is worth nothing to us of course. I send also a couple of books one for Frank + one for May. Kiss them both for their dear Papa, and help them to keep up a lively remembrance of him so that if he live to see them again they may not receive him as a stranger. And you my own dear wife in my imagination I can fold you to my arms in a warm + loving embrace but then comes the stern reality- Oh how different- Yet through the mercy and goodness of our Heavenly Father I hope yet we may spend many happy days together, and may our temporary separation prove of great benefit to each of us, teaching us to value each other more highly, and to more careful and circumspect in our relation to each other. I feel sometimes as though another harsh or angry word could never pass my lips, + yet I know that I am too much of the Earth, Earthy- to expect this, but let us ever aim my darling to come as near to this standard as our worldly natures may admit, + whenever we come short may we freely forgive + be forgiven. Trusting this may find you well, as it leaves me, + hoping the time is not far distant when we shall be united again I bid you farewell. Lewis

[On side of first page]

Did you receive my letter containing photographs of Peter and Margaret? Always acknowledge the receipt of every thing I send to you!