8 January 1865: “That army had suffered much in its morale by the long succession of retreats from Dalton”

Item Description: Letter from Jefferson Davis to his nephew Hugh.  He writes about issues with the Confederate military and government. 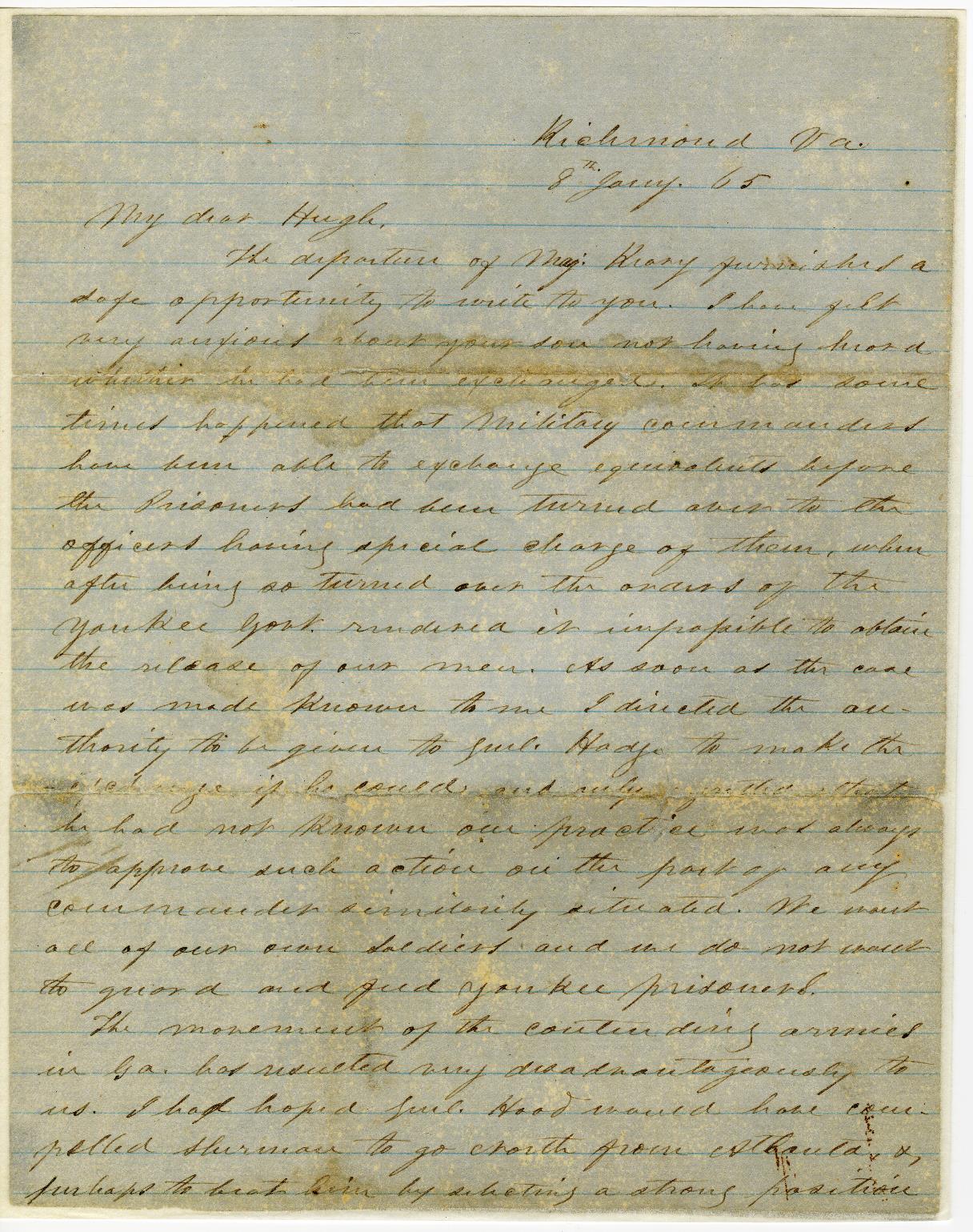 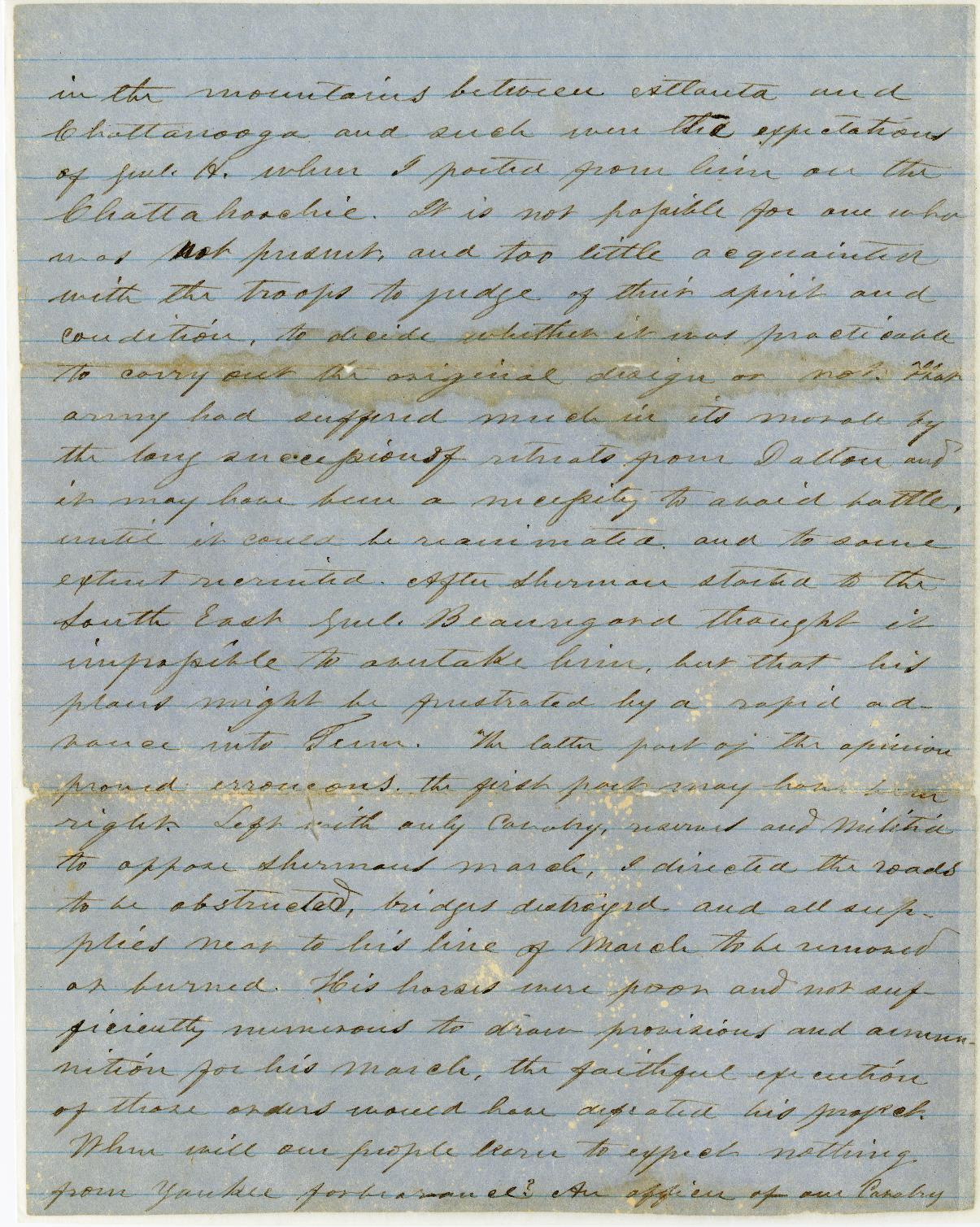 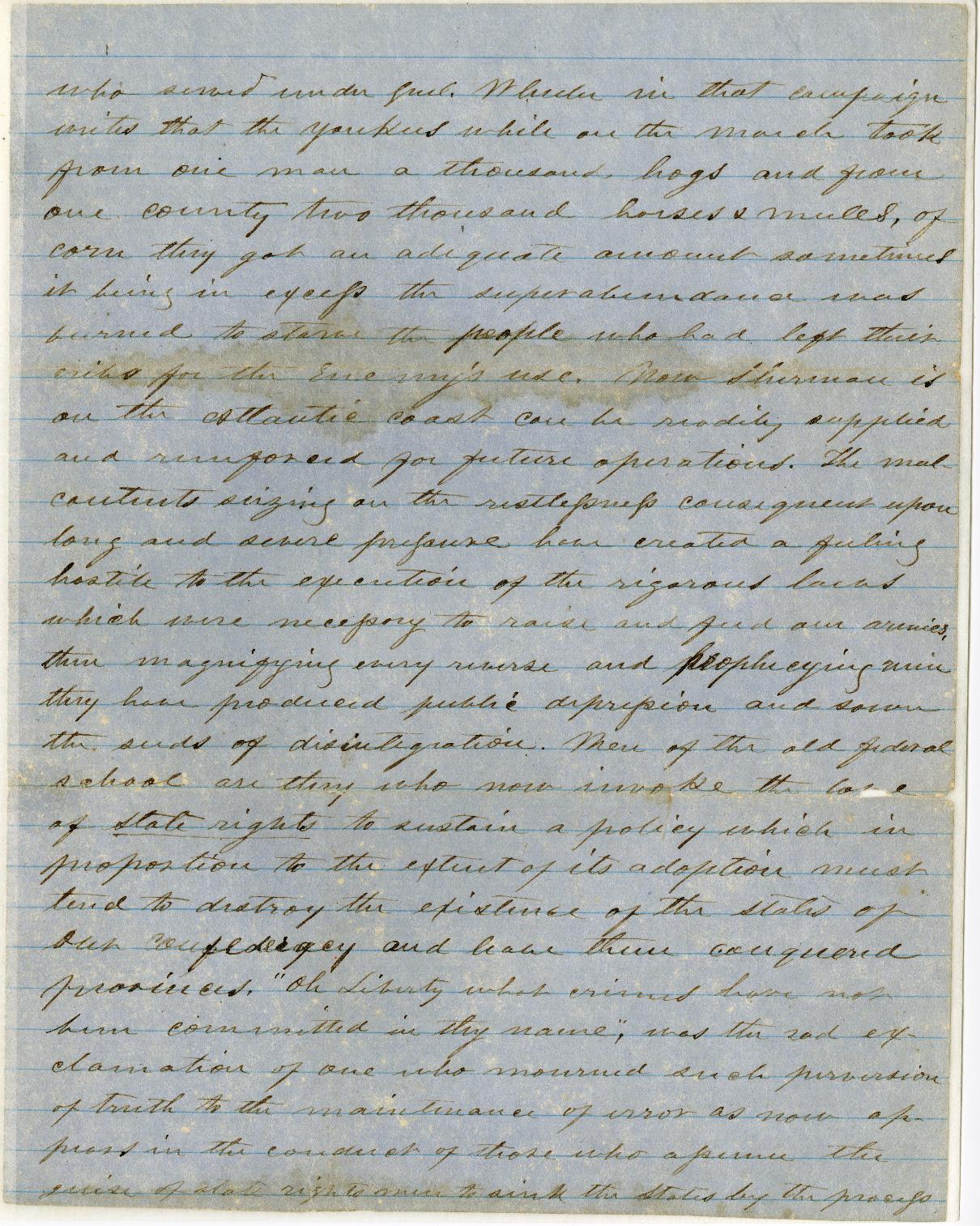 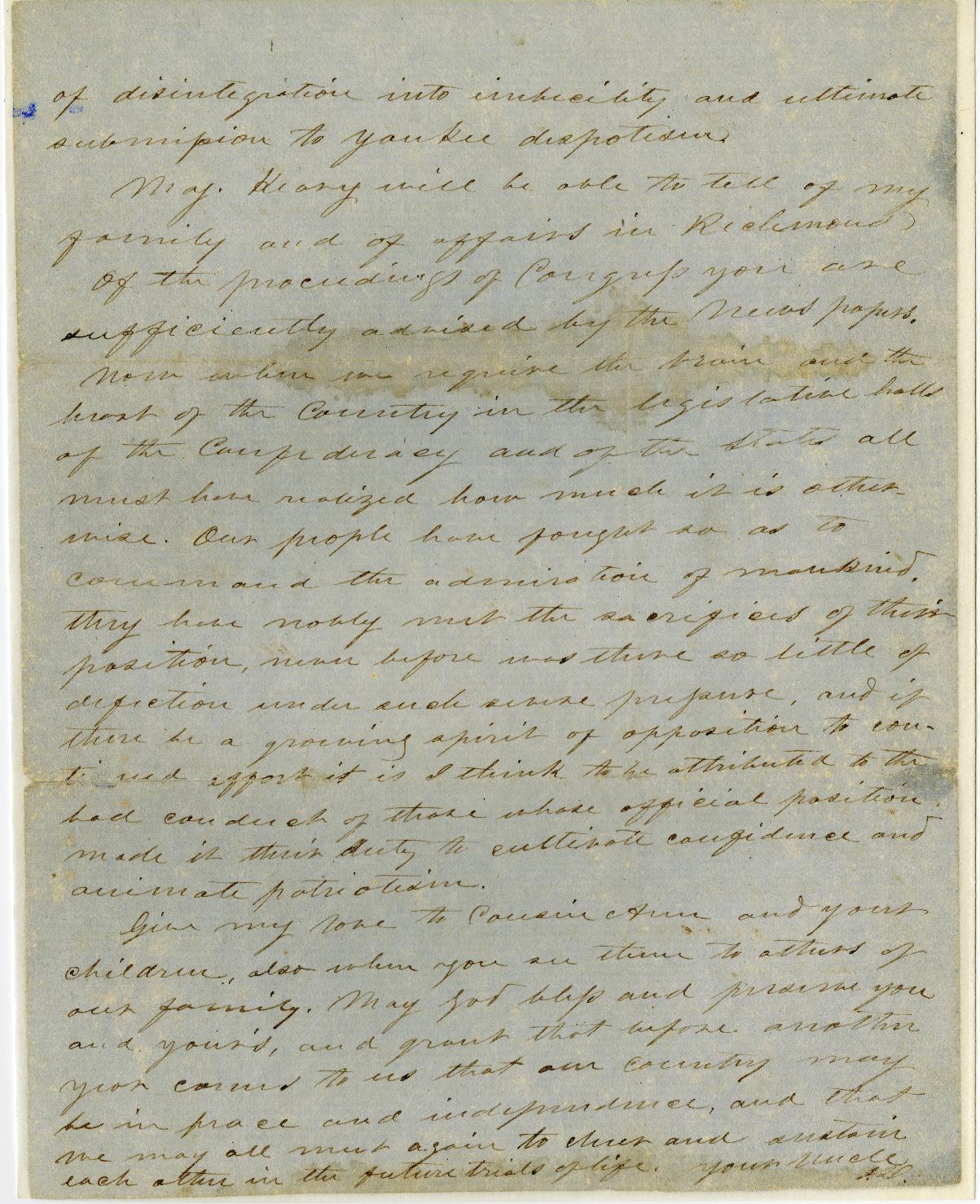 The departure of Maj: Henry furnished a safe opportunity to write to you. I have felt very anxious about your son not having heard whether he had been exchanged. It has sometimes happened that military commanders have been able to exchange ? before the prisoners had been turned over to the officers having special charge of them, when after being so turned over the orders of the Yankee Govt rendered it impossible to obtain the release of our men. As soon as the case was made known to me I directed the authority to be give to Genl. Hady to make the exchange if he could and only ? that he had not known our practice was always to approve such action on the part of any commanders similarly situated. We want all of our own soldiers and we do not want to guard and feed Yankee prisoners.

The movement of the contending armies in Ga. has resulted any disadvantageously to us. I had hoped Genl. Hood would have compelled Sherman to go north from Atlanta and perhaps to beat him by selecting a strong position in the mountains between Atlanta and Chattanooga and such were the expectations of Genl. H when I parted from him on the Chattahoochee. It is not possible for one who was not present and too little acquainted with the troops to judge of their spirit and condition to decide whether it was practicable to carry out the original design or not. That army had suffered much in its morale by the long succession of retreats from Dalton and it may have been a necessity to avoid battle until it could be reanimated and to some extent recruited. After Sherman started to the South East Genl. Beauregard thought it impossible to overtake him, but that his plans might be frustrated by a rapid advance into Tenn. The latter part of the opinion proved erroneous, the first part may have been right. Left with only cavalry, reserves and militia to oppose Sherman’s march, I directed the roads to be obstructed, bridges destroyed, and all supplies near to his line of march to be removed or burned. His horses were poor and not sufficiently numerous to drain provisions and ammunition for his march, the faithful execution of those orders would have defeated his progress. When will our people learn to expect nothing from Yankee forbearance? An officer of our Cavalry who served under Genl. Wheeler in that campaign writes that the Yankees while on the march took from one man a thousand hogs and from one county two thousand horses and mules, of corn they got an adequate amount sometimes being in the excess the superabundance was burned to starve the people who had left their ? for the enemy’s use. Now Sherman is on the Atlantic coast can be readily supplied and reinforced for future operations. The malcontents seizing on the restlessness consequent upon long and severe pressures have created a feeling hostile to the execution of the rigorous lacks which were necessary to raise and feed our armies, then magnifying every reverse and prophesying will they have produced public depression and sow the seeds of disintegration. Men of the old federal school are those who now invoke the ? of state rights to sustain a policy which in proposition to the extent of its adoption must tend to destroy the existence of the states of our confederacy and have them conquered provinces. “Oh Liberty what crimes have not been committed in thy name,” was the sad exclamation of one who mourned such perversion of truth to the maintenance of error as now appears in the conduct of those who ? the guise of state rights were to sink that states by the process of disintegration into imbecility and ultimate submission to Yankee despotism.

Maj. Henry will be able to tell of my family and of affairs in Richmond. Of proceedings on Congress you are sufficiently advised by the newspapers. Now when we require the brain and the heart of the country in the legislative halls of the Confederacy and of the states all must have realized how much it is otherwise. Our people have fought so as to command the admiration of mankind. They have nobly met the sacrifices of their position, never before was there so little of defection under such severe pressure, and if there be a grieving spirit of opposition to continued effort it is I think to be attributed to the bad conduct of those whose official position made it their duty to ultimate confidence and animate patriotism.

Give my love to Cousin Anne and your children, also when you see them to others of our family. May God bless and preserve you and your’s, and grant that before another year comes to us that our country may be in peace and independence, and that we may all meet again to cheer and sustain each other in the future trials of life.