14 January 1865: “After all what is the use of “putting men into the Army” whether they be white or black if we cannot keep them there?”

Item Description: Letter from William Porcher Miles to Gen. Beauregard about use of slaves as soldiers in Confederate Army.  Miles goes back on his earlier idea of arming the slaves because he believes that will make them more likely to defect to the Union Army.  He believes that if conscription laws were properly enforced, the Confederate Army would have a large enough army of effective soldier to fight the enemy. 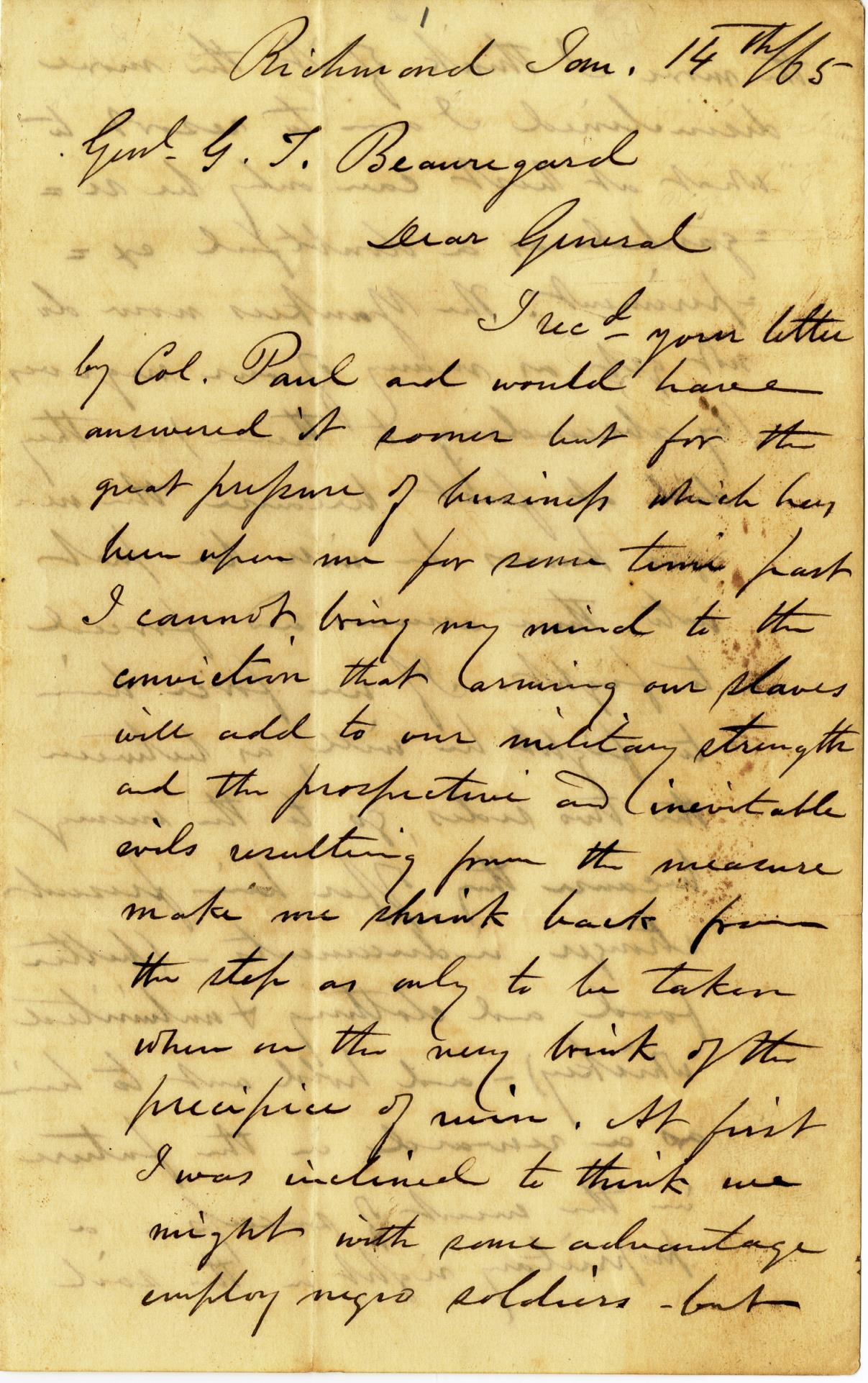 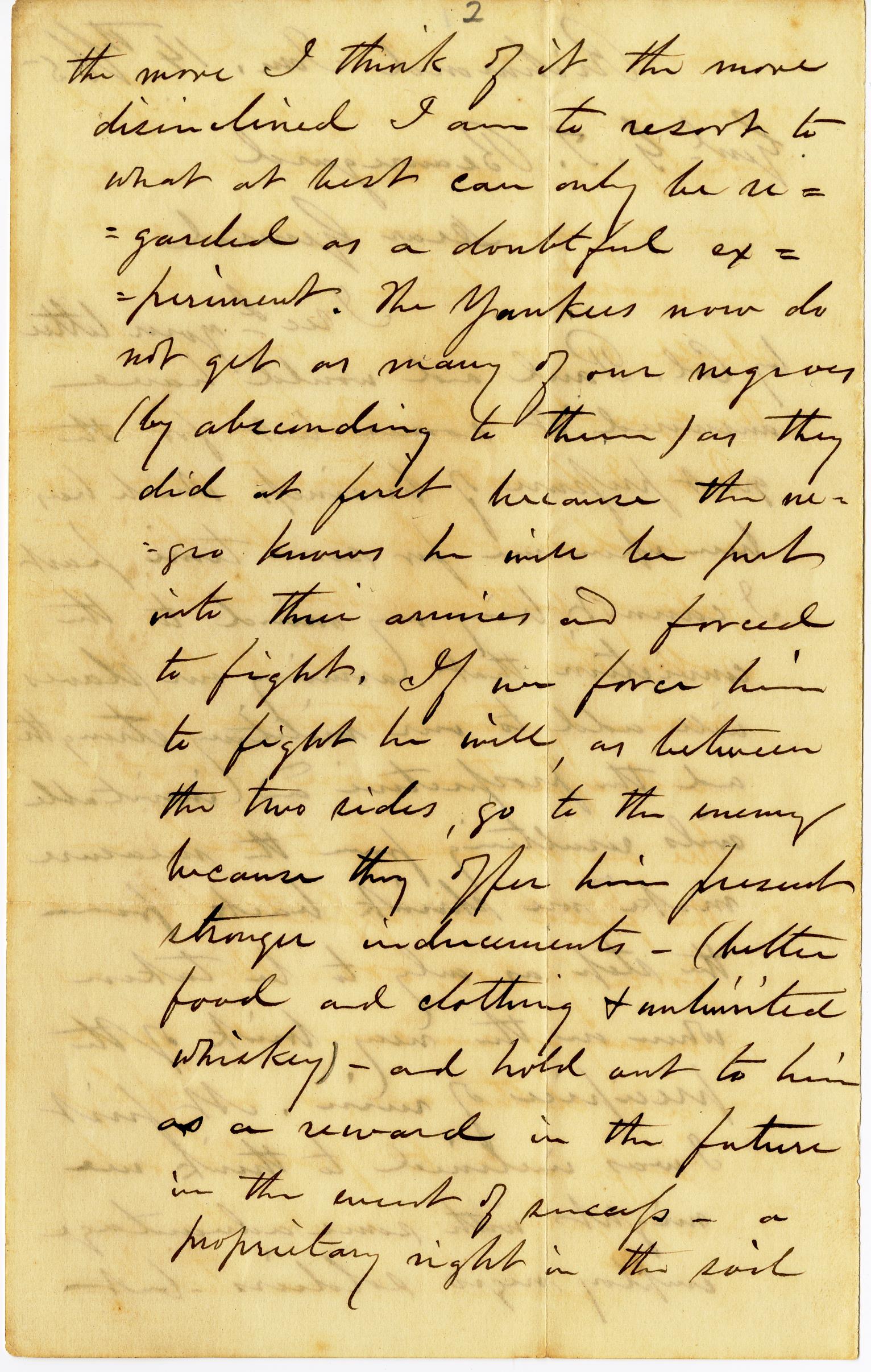 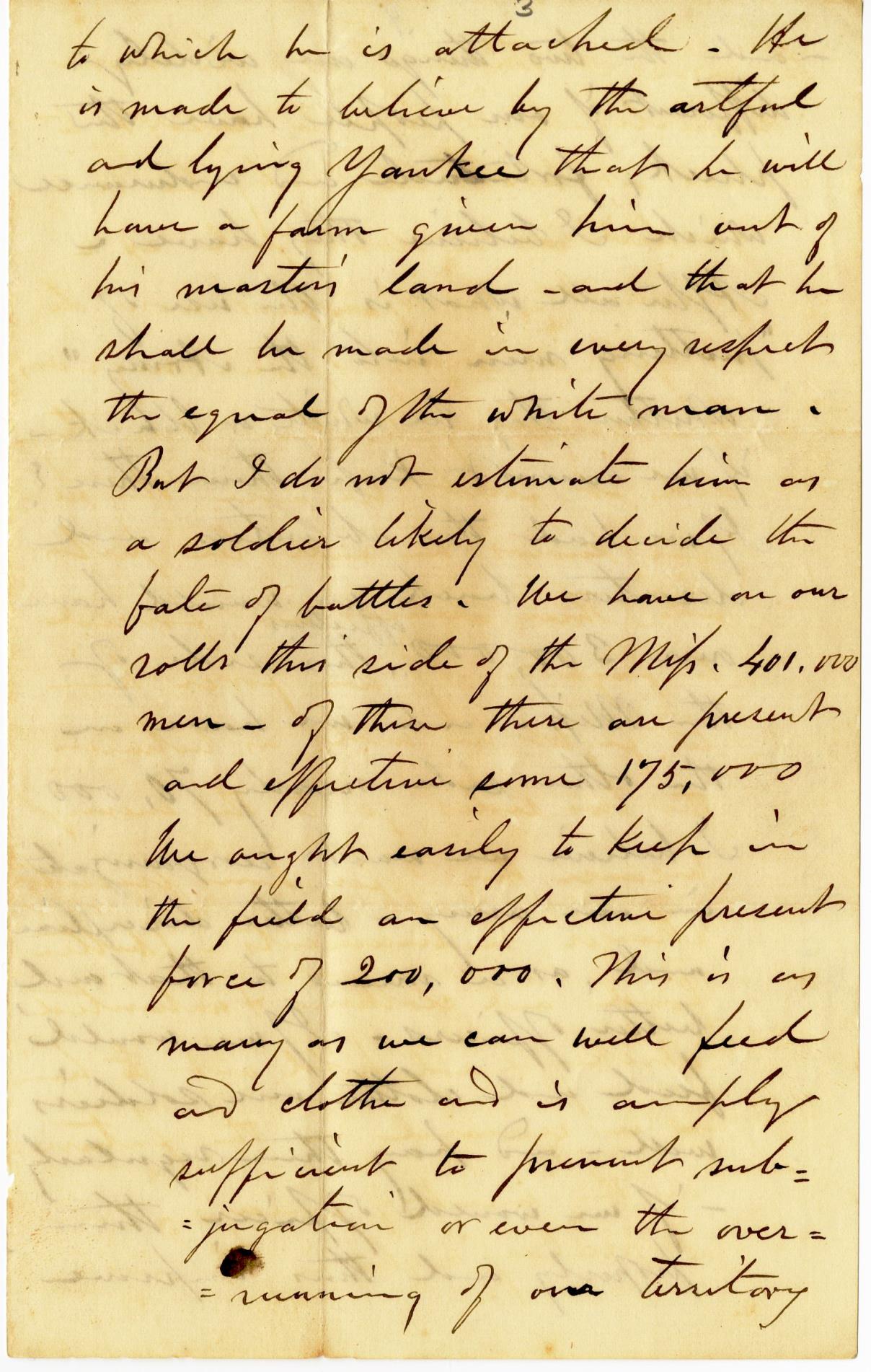 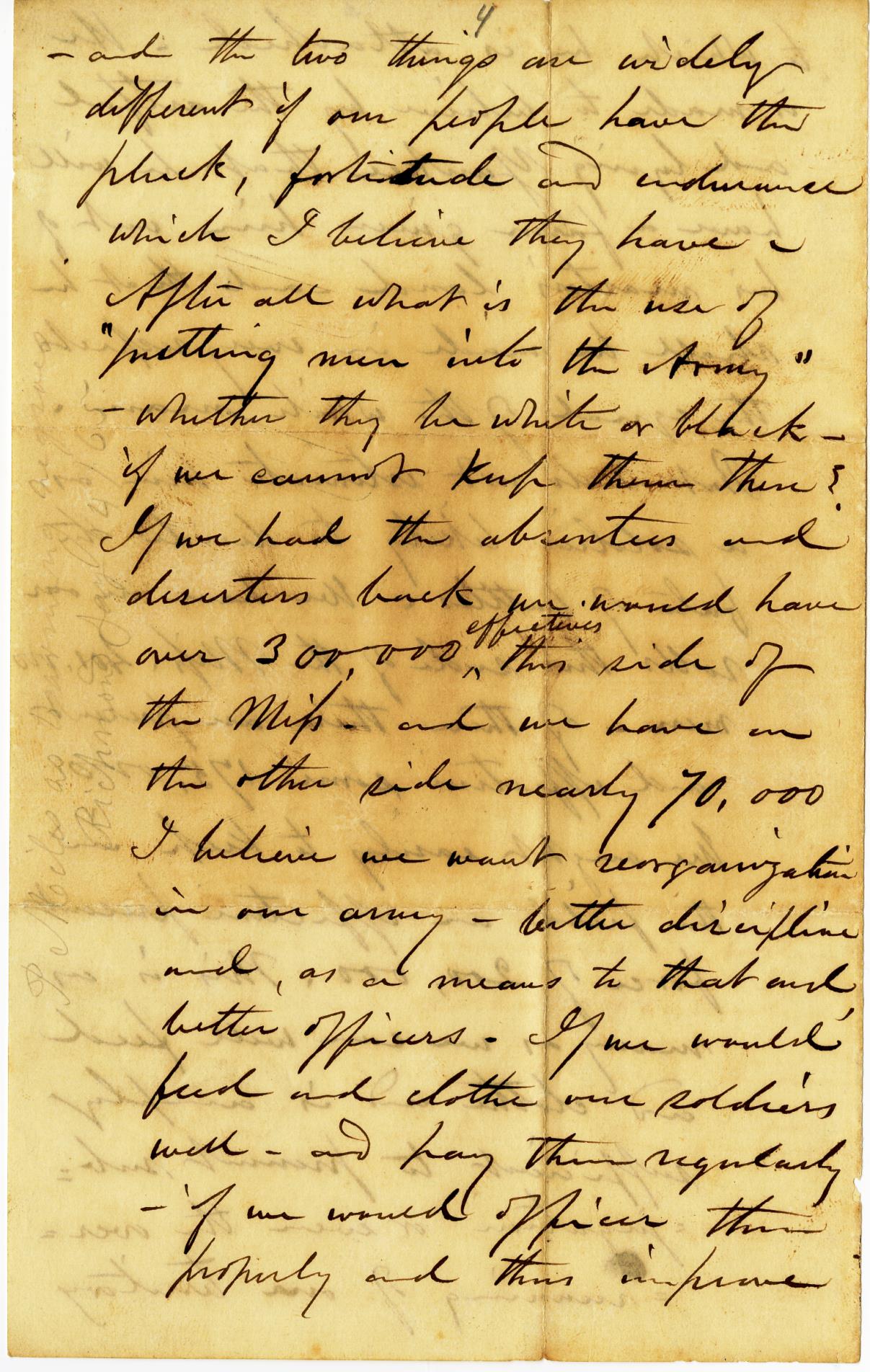 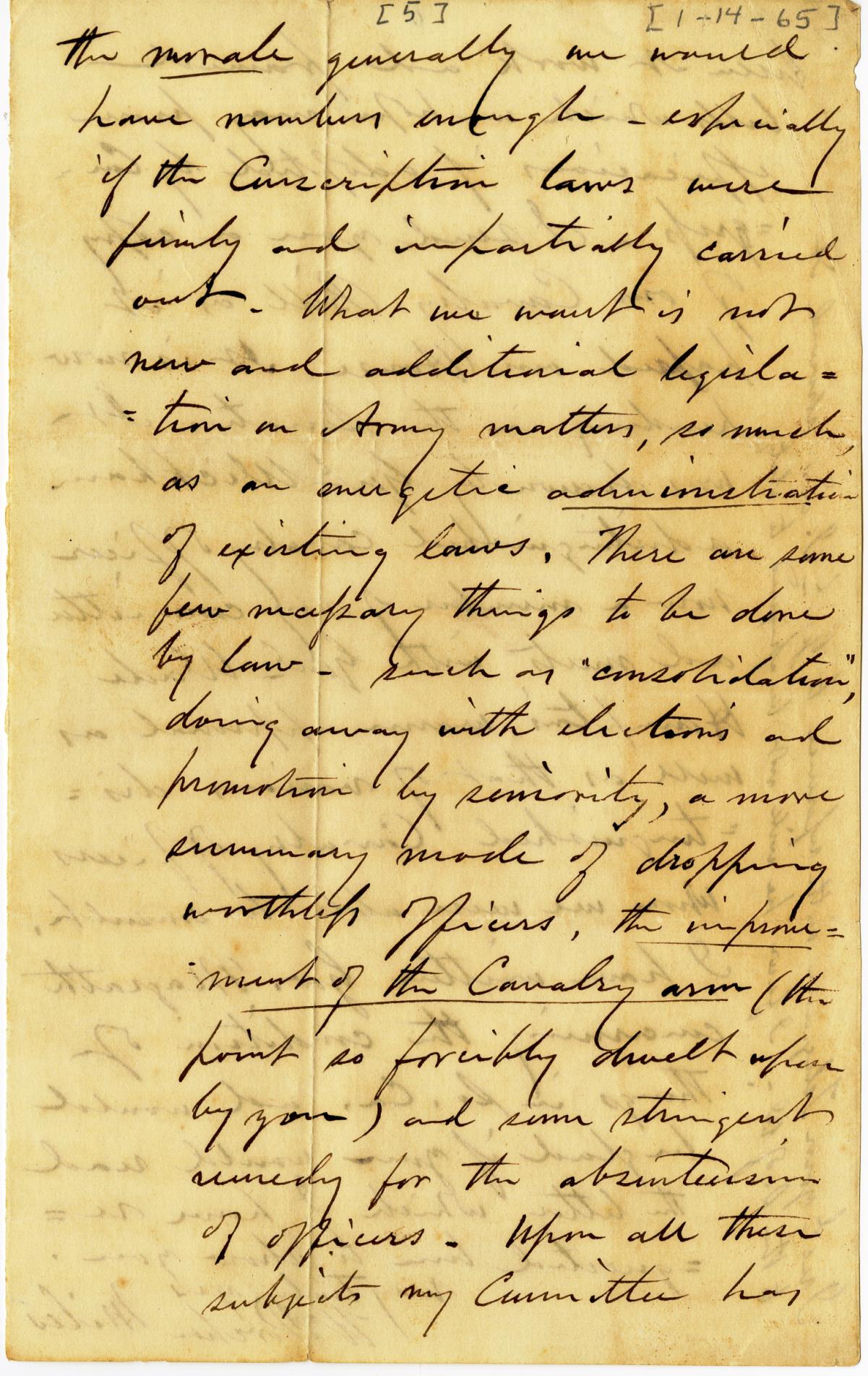 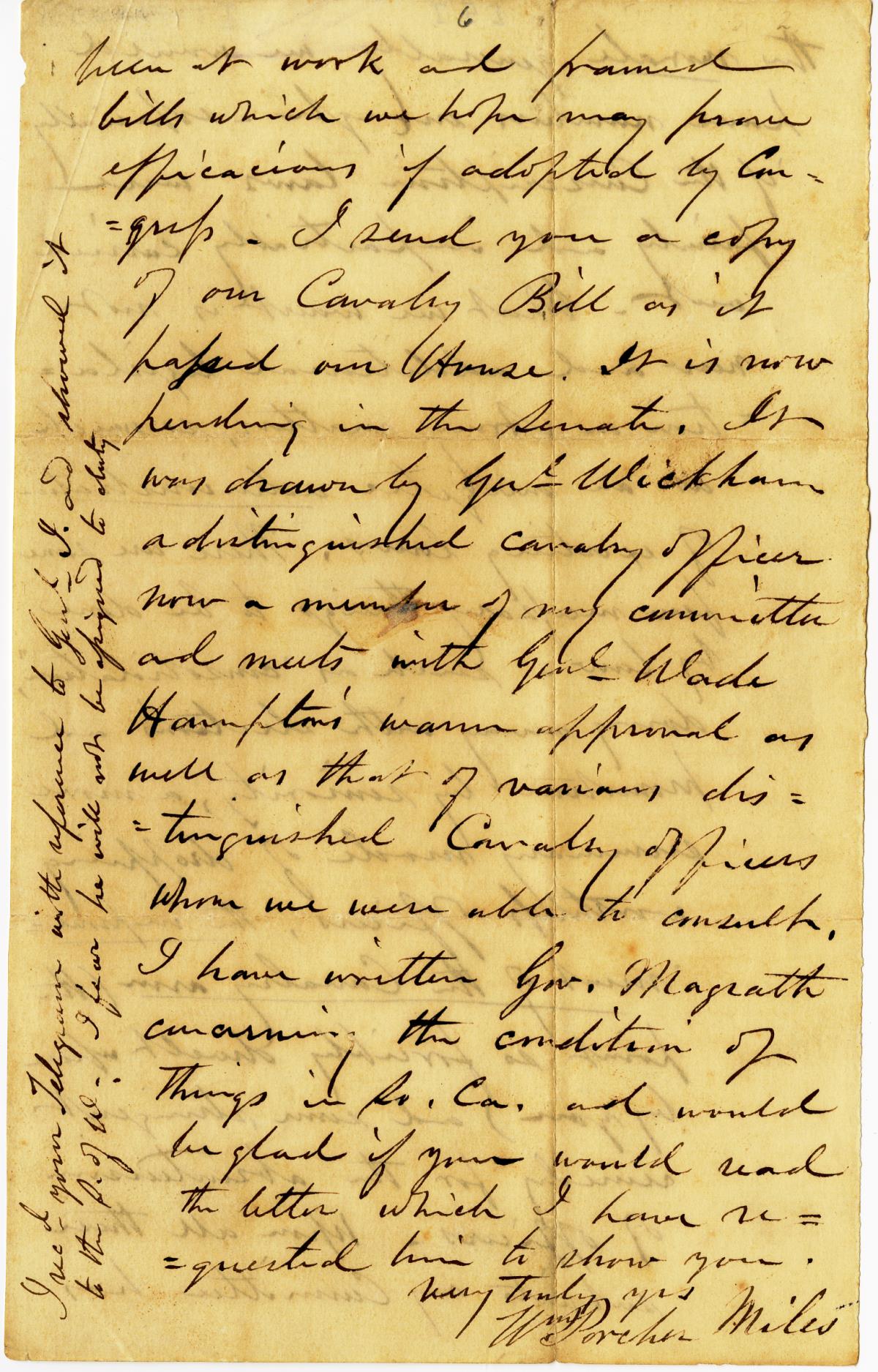 I recd your letter by Col. Paul and would have answered it sooner but for the great purpose of business which has been upon me for some time past I cannot bring my mind to the conviction that arming our slaves will add to our military strength and the prospective and inevitable evils resulting from the measure make me shrink back from the step as only to be taken when in the very brink of the precipice of ?. At first I was inclined to think we might with some advantage employ negro soldiers but the more I think of it the more disinclined I am to resort to what at best can only be regarded as a doubtful experiment. The Yankees now do not get as many of our negros by absconding to them / as they did at first because the negro knows he will be put into their armies and forced to fight. If we force him to fight he will as between the two sides, go to the enemy because they offer him present strong inducements- (better food and clothing and unlimited whiskey)- and hold out to him as a reward in the future in the event of success- a proprietary right in the soil to which he is attached. He is made to believe by the artful and lying Yankee that he will have a farm given him out of his master’s land, and that he shall be made in every respect the equal of the white man. But I do not estimate him as a soldier likely to decide the fate of battle. We have on our rolls this side of the Miss. 401,000 men, of them there are present and effective some 175,000. We ought easily to keep in the field an effective present force of 200,000. This is as many as we can well feed and clothe and is amply sufficient to prevent subjugation or even the overrunning of on territory and the two things are widely different if our people have the pluck, fortitude and endurance which I believe they have. After all what is the use of “putting men into the Army” whether they be white or black if we cannot keep them there? If we had the absentees and deserters back we would have over 300,000 effectives this side of the Miss. and we have on the other side nearly 70,00 I believe we want reorganization in our army- better discipline and, as a means to that and better officers. If we would feed and clothe our soldiers well- and pay them regularly- if we would officer them properly and this improve the morale generally we would have numbers enough, especially if the Conscription laws were firmly and impartially carried out. What we want is not new and additional legislation in Army matters, so much as a energetic administration of existing laws. There are some few ? things to be done by law, such as “consolidation” doing away with elections and promotion by seniority, a more summary mode of dropping worthless officers. the improvement of the Cavalry arm (the point so forcibly dwelt upon by you) and some stringent remedy for the absenteeism of officers. Upon all these subjects my Committee has been at work and framed bills which we hope may prove efficacious if adopted by Congress. I send you a copy of our Cavalry Bill as it passed our House. It is now pending in the Senate. It was drawn by Genl Wickham a distinguished cavalry officer now a member of my committee and meets with Genl Wade Hampton’s warm approval as well as that of various distinguished Cavalry officers upon we were able to consult. I have written Gov. Magrath concerning the condition of things in So. Ca. and would be glad if you would read the letter which I have requested him to show you.

Incd your Telegram with reference to Genl Hood and showed it to the S. of W. I fear he will not be assigned to duty.