16 January 1865: “two of the biggest humbugs in the shape of army surgeons that I know of”

Posted on 16 Jan ’15 by Rebecca Williams

Item Description: Letters dated 19 January 1685 by John Lewis Whitaker to his brother and wife. Jonathan L. Whitaker was a physician from Orange County, N.Y. He served as a United States Army surgeon at a hospital at Chester, Pa., and with the 26th United States Colored Troops near Beaufort, S.C. On this day, he wrote two letters, one to his wife, Julia A. Wells Whitaker, and one to his brother, Peter Whitaker. 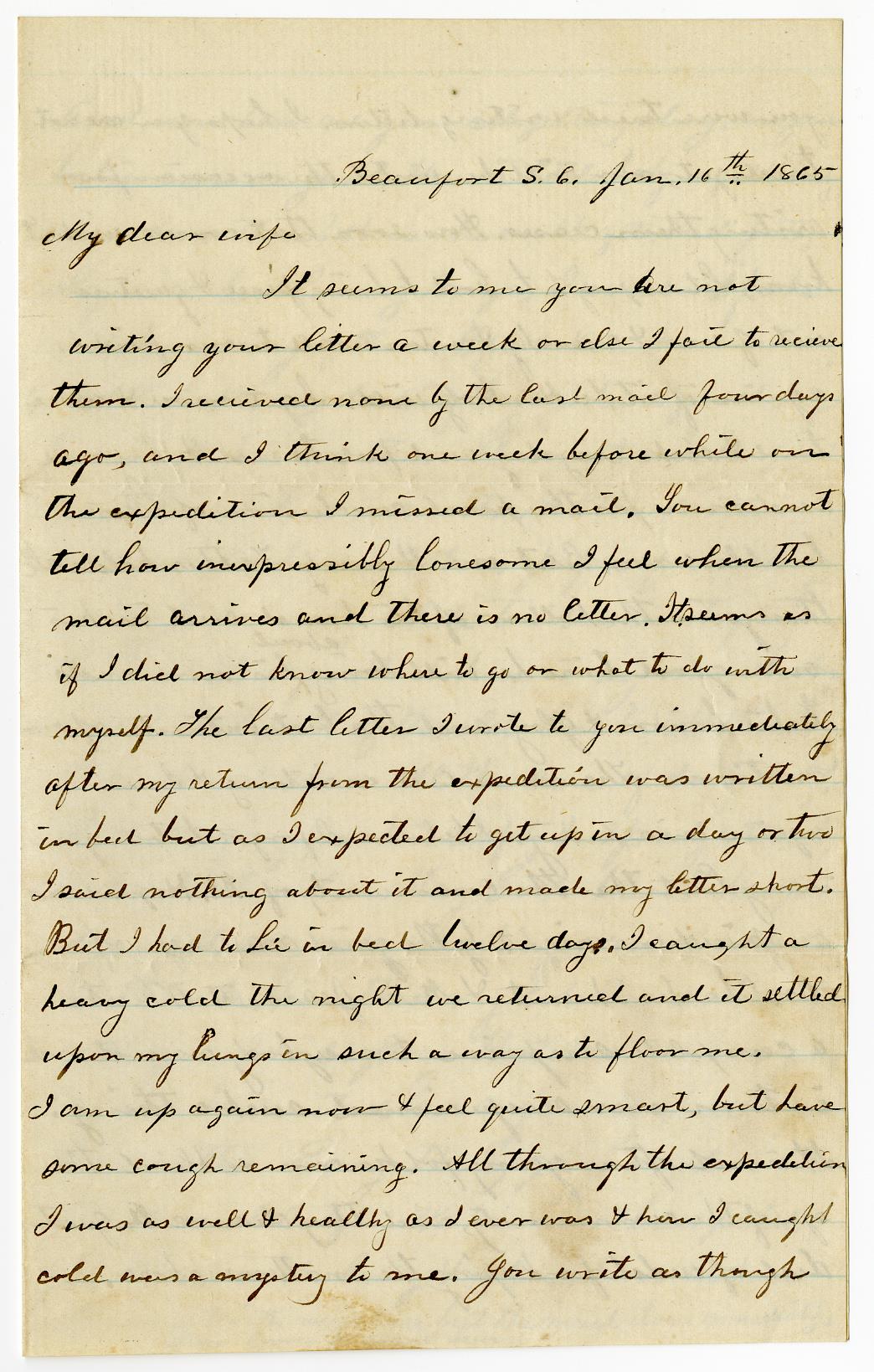 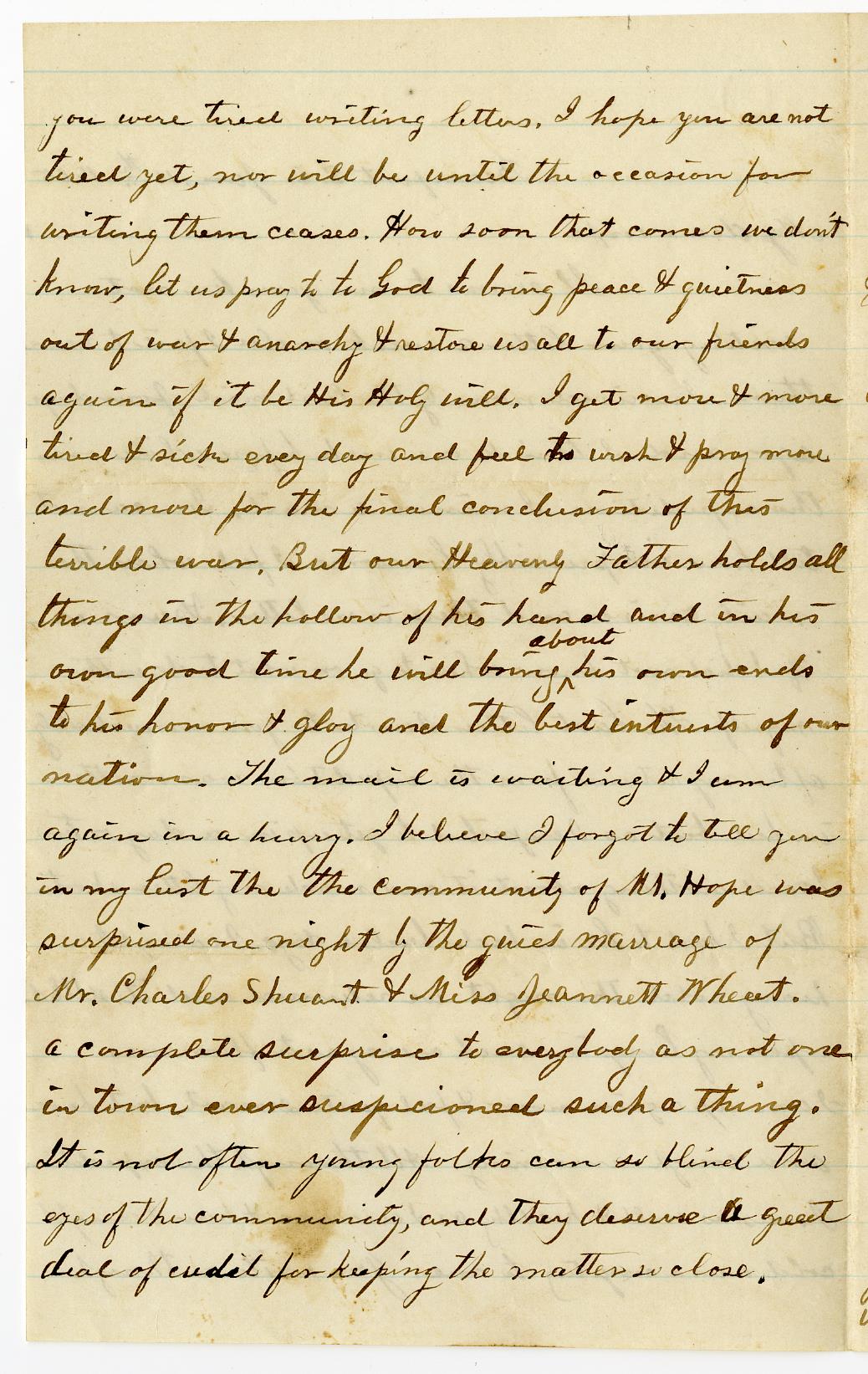 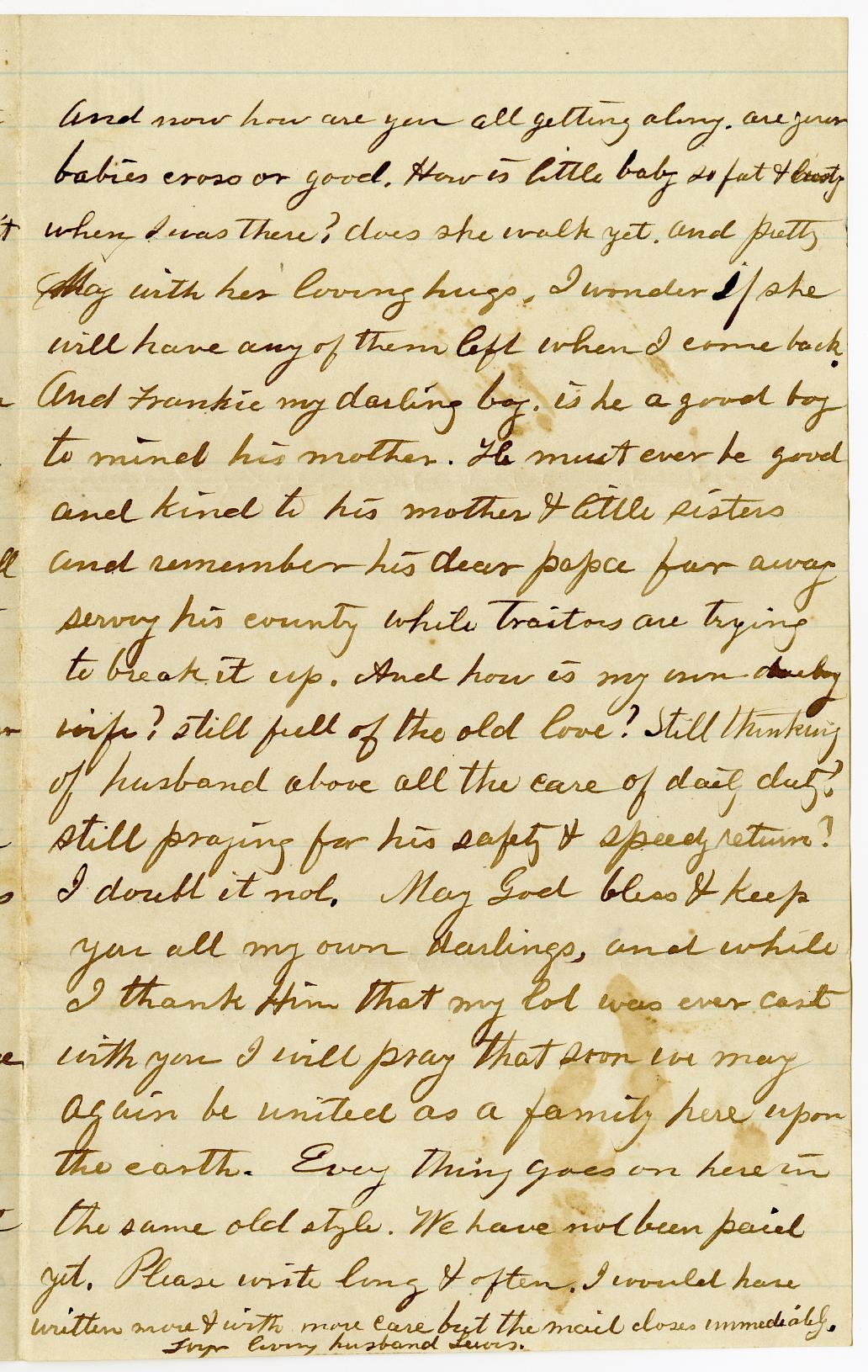 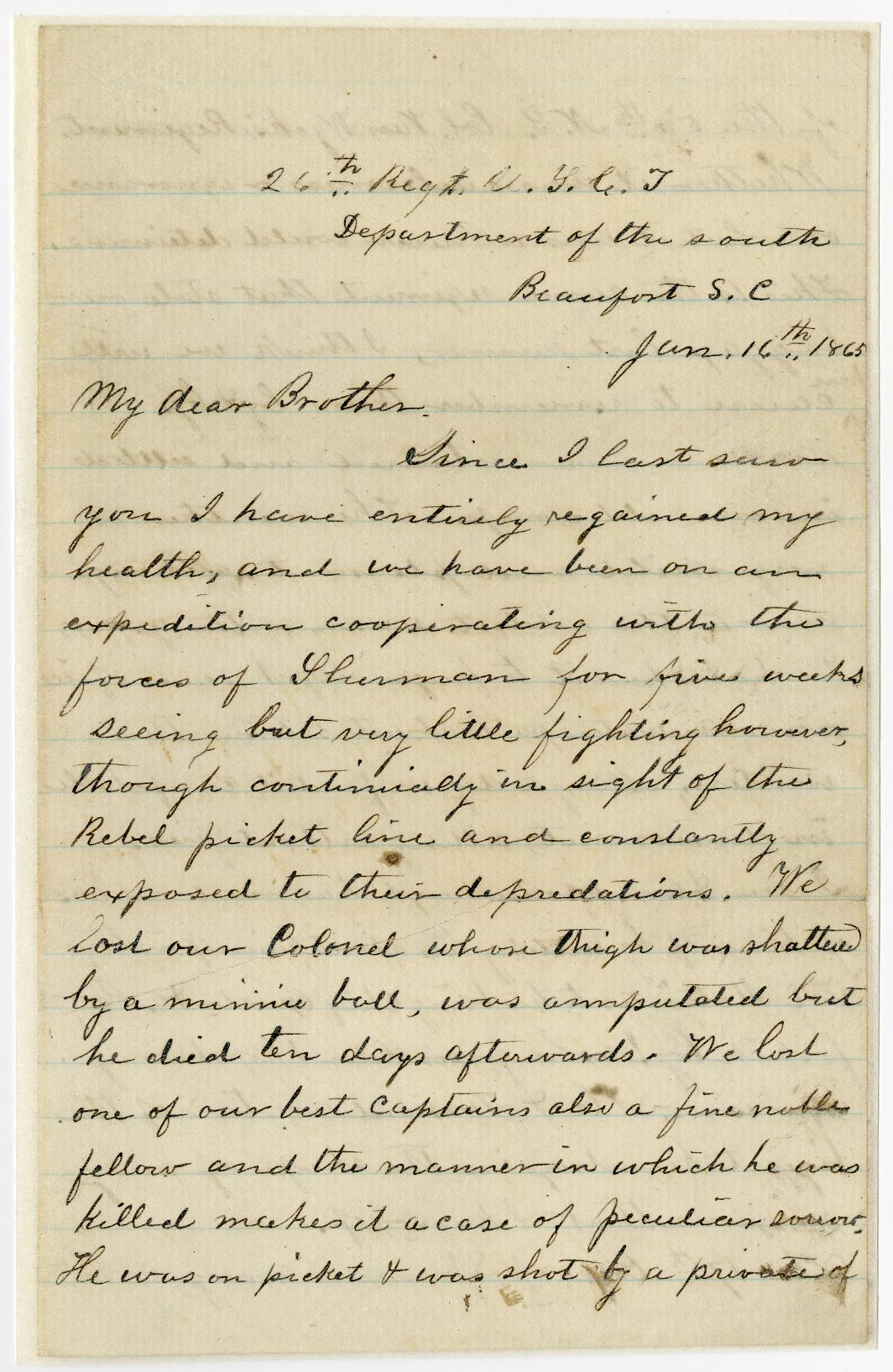 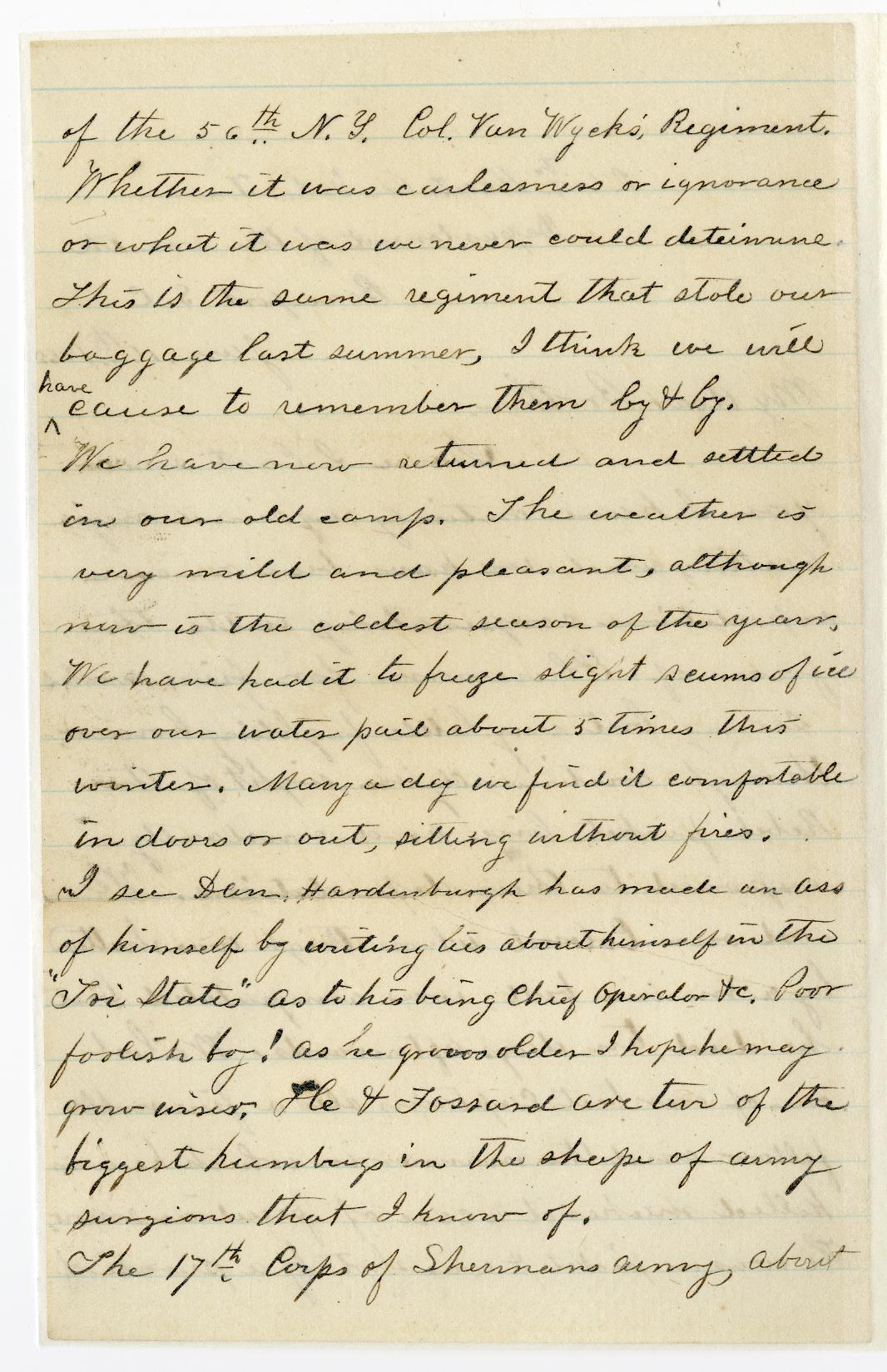 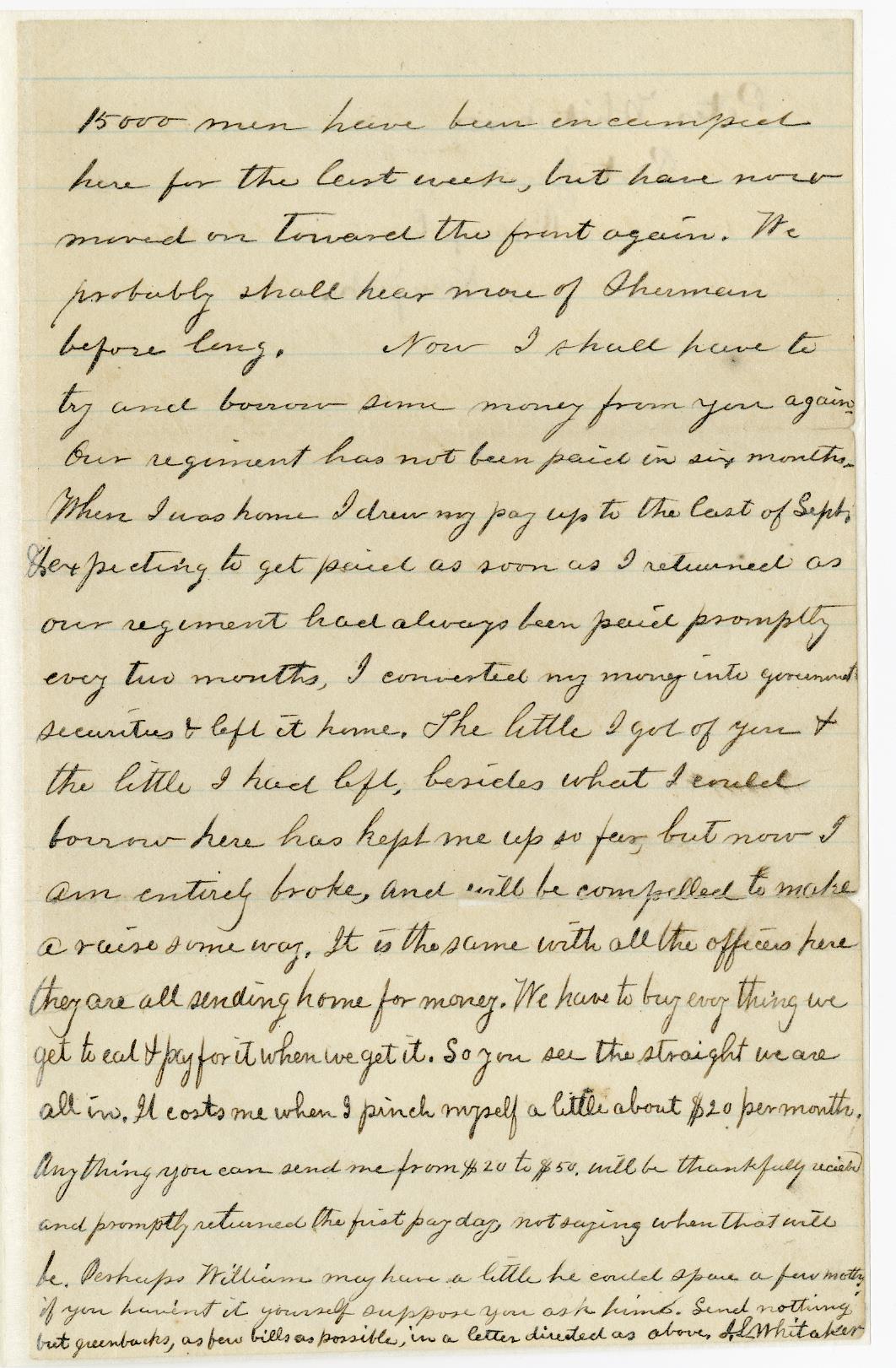 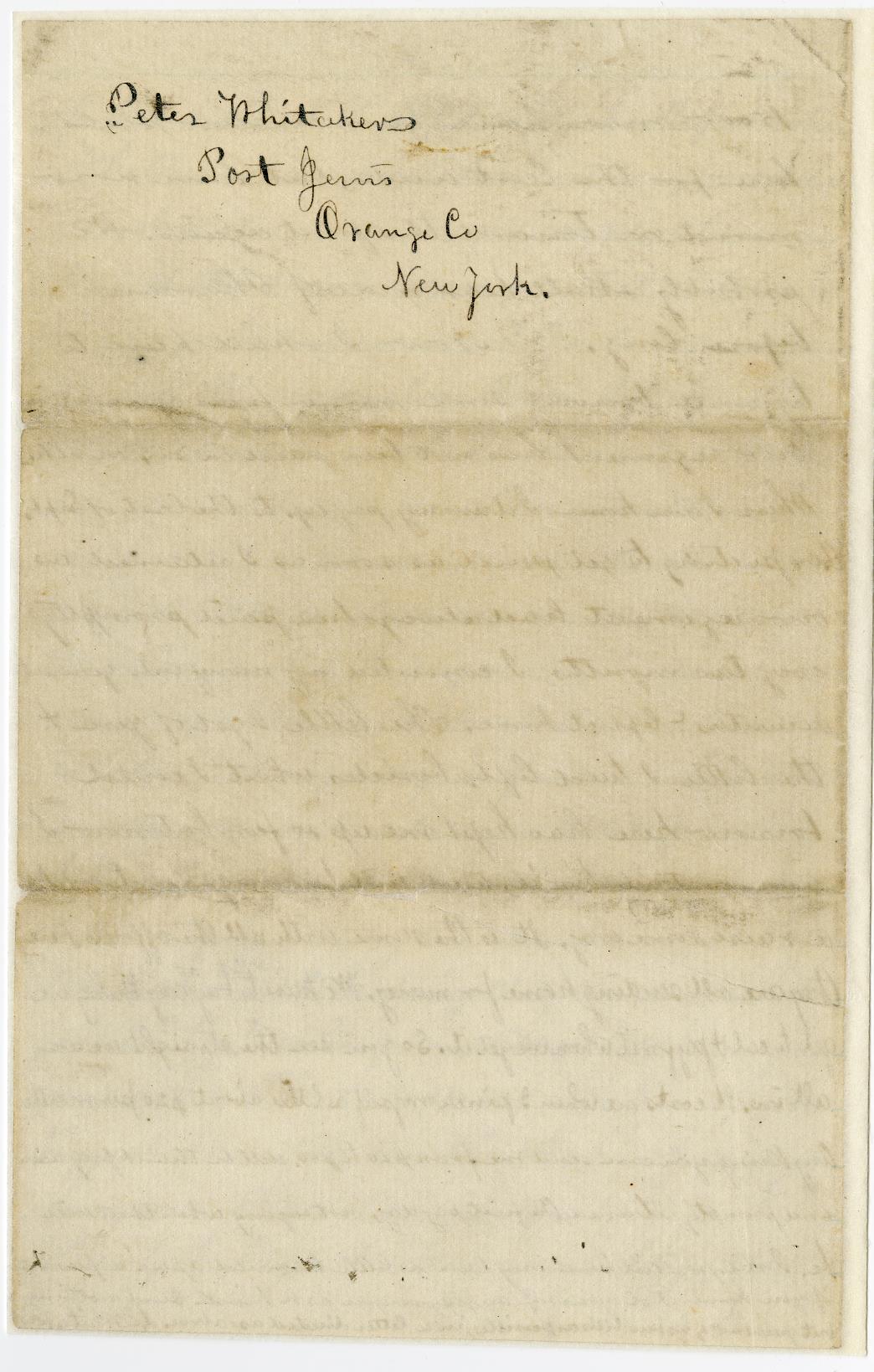 Department of the south

Since I last saw you I have entirely regained my health, and we have been on an expedition cooperating with the forces of Sherman for five weeks seeing but very little fighting however, though continually in sight of the Rebel picket line and constantly exposed to their depredations. We lost our Colonel whose thigh was shattered by a minnie ball, was amputated but he died ten days afterwards. We lost one of our best captains also a fine noble fellow and the manner in which he was killed makes it a case of a peculiar sorrow. He was on picket & was shot by a private of of the 56th N.Y. Col. Van Wyck’s Regiment. Whether it was carlessness or ignorance or what it was we never could determine. This is the same regiment that stole our baggage last summer, I think we will have cause to remember them by & by.

We have now returned and settled in our old camp. The weather is very mild and pleasant, although now is the coldest season of the years. We have had it to freeze slight scums of ice over our water pail about 5 times this winter. Many a day we find it comfortable in doors or out, sitting without fires. I see Dan Hardenburgh has made an ass of himself by writing lies about himself in the “Tri States” as to his being Chief Operator &c. Poor foolish boy! as he grows older I hope he may grow wiser. He & Fossard are two of the biggest humbugs in the shape of army surgeons that I know of.

The 17th Corps of Shermans army, about 15000 men have been encamped here for the last week, but have now moved on toward the front again. Our regiment has not been paid in six months. When I was home I drew my pay up to the last of Sept. & expecting to get paid promptly every two months, I converted my money into government securities & left it home. The little I got of you & the little I had left, besides what I could borrow here has kept me up so far, but now I am entirely broke, and will be compelled to make a raise some way. It is the same with all the officers here they are all sending home for money. We have to buy every thing we get to eat & pay for it when we get it. So you see the straight we are all in. It costs me when I pinch myself a little about $20 per month. Any thing you can send me from $20 to $50 will be thankfully received and promptly returned the first pay day, not saying when that will be. Perhaps William may have a little he could spare a few months if you haven’t it yourself suppose you ask him. Send nothing but greenbacks, as few bills as possible, in a letter directed as above.

It seems to me you are not writing your letter a week or else I fail to receive them. I received none by the last mail four days ago, and I think one week before while on the expedition I missed a mail. You cannot tell how inexpressibly lonesome I feel when the mail arrives and there is no letter. It seems as if I did not know where to go or what to do with myself. The last letter I wrote to you immediately after my return from the expedition was written in bed but as I expected to get up in a day or two I said nothing about it and made my letter short. But I had to lie in bed twelve days. I caught a heavy cold the night we returned and it settled upon my lungs in such a way as to floor me. I am up again now & feel quite smart, but have some cough remaining. All through the expedition I was as well & healthy as I ever was & how I caught cold was a mystery to me. You write as though you were tired writing letters. I hope you are not tired yet, nor will be until the occasion for writing them ceases. How soon that comes we don’t know, let us pray to God to bring peace & quietness out of war & anarchy & restore us all to our friends again if it be His Holy will. I get more & more tired & sick every day and feel to wish & pray more and more for the final conclusion of this terrible war. But our Heavenly Father holds all things in the hollow of his hand and in his own good time he will bring about his own ends to his honor & glory and the best interests of our nation. The mail is waiting & I am again in a hurry. I believe I forgot to tell you in my last the the community of Mt. Hope was surprised one night by the quiet marriage of Mr. Charles Shuart & Miss Jennett Wheat. a complete surprise to everybody as not one in town ever suspicioned such a thing. It is not often young folks can so blind the eyes of the community, and they deserve a great deal of credit for keeping the matter so close.

And now how are you all getting along. are your babies cross or good. How is little baby so fat & lusty when I was there? does she walk yet, and pretty May with her loving hugs, I wonder if she will have any of them left when I come back. And Frankie my darling boy, is he a good boy to mind his mother. He must ever be good and kind to his mother & little sisters and remember his dear papa far away serving his country while traitors are trying to break it up. And how is my own darling wife? still full of the old love? Still thinking of husband above all the care of daily duty? Still praying for his safety & speedy return? I doubt it not. May God bless & keep you all my own darlings, and while I thank Him that my lot was ever cast with you I will pray that soon we may again be united as a family here upon the earth. Every thing goes on here in the same old style. We have not been paid yet. Please write long & often. I would have written more & with more care but the mail closes immediately.