18 January 1865: “I hope the war will be over and the rebellion crushed before another Christmas comes around”

Posted on 18 Jan ’15 by Biff Hollingsworth

Item Description: A letter from Robert Stuart Finley to his fiancee, Mary A. Cabeen, describing his movements with his Regiment through Georgia and South Carolina. He served in the 30th Illinois Infantry. He describes skirmishes on their way to Beaufort, as well overcoming the African American troops holding the area. 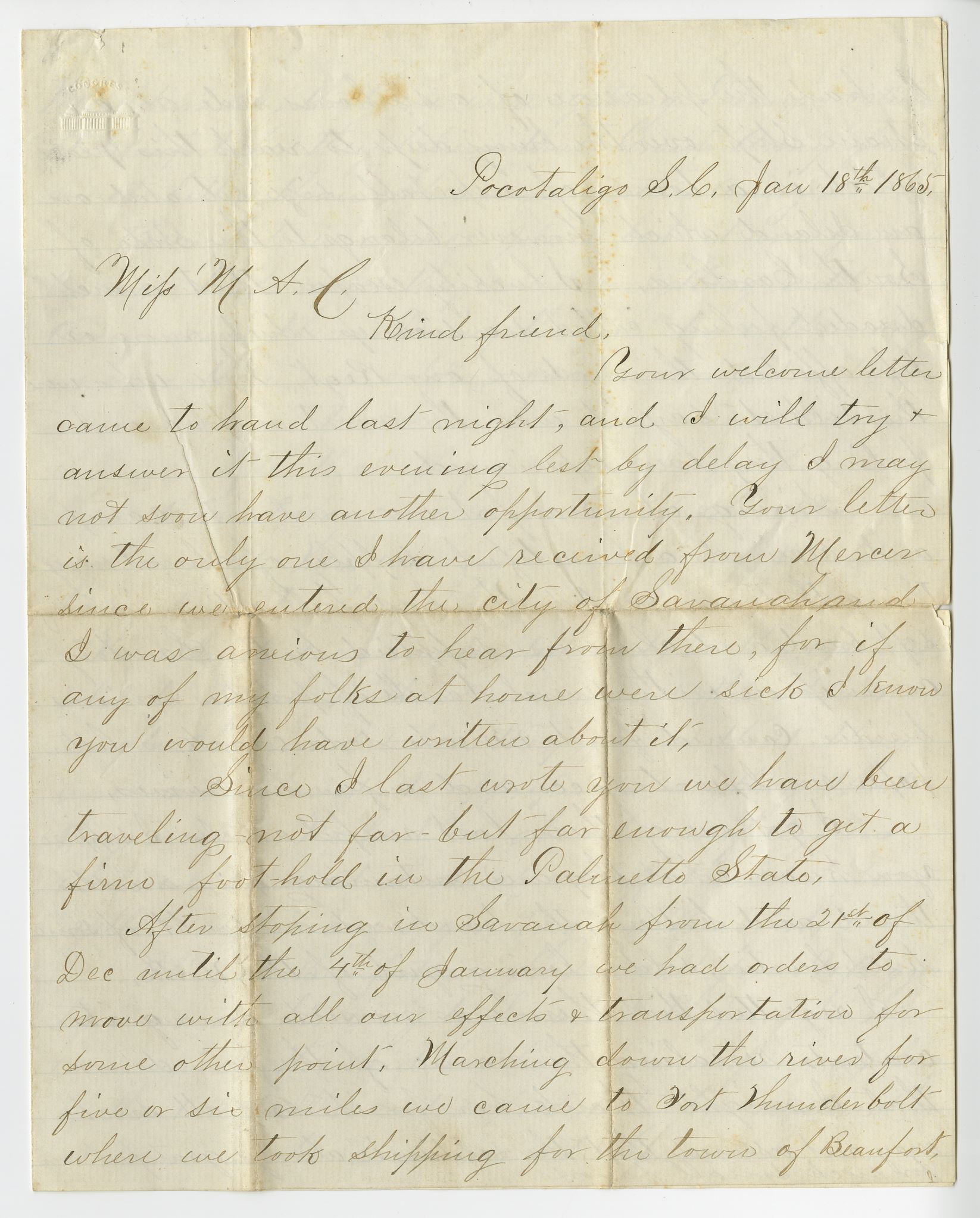 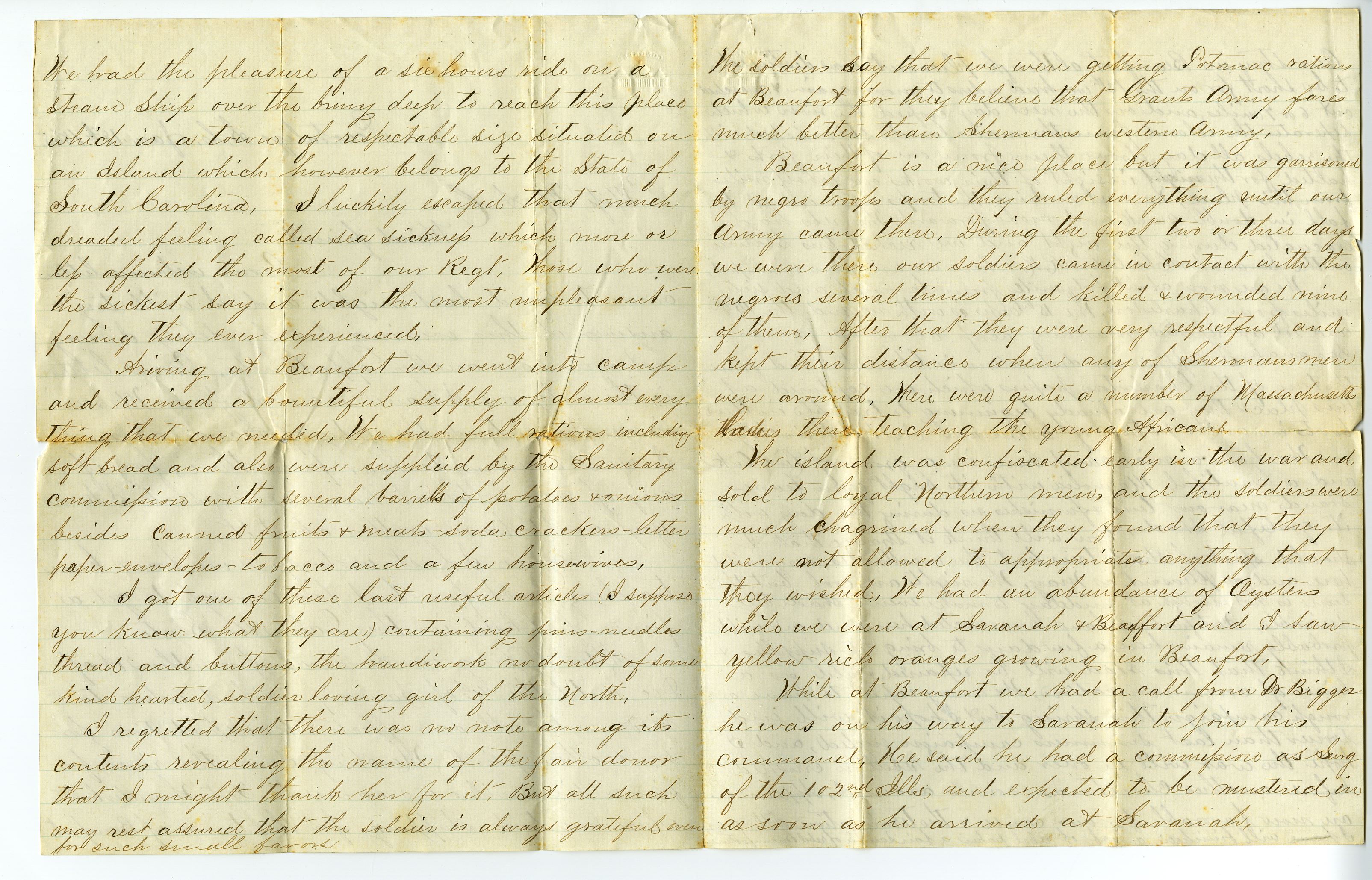 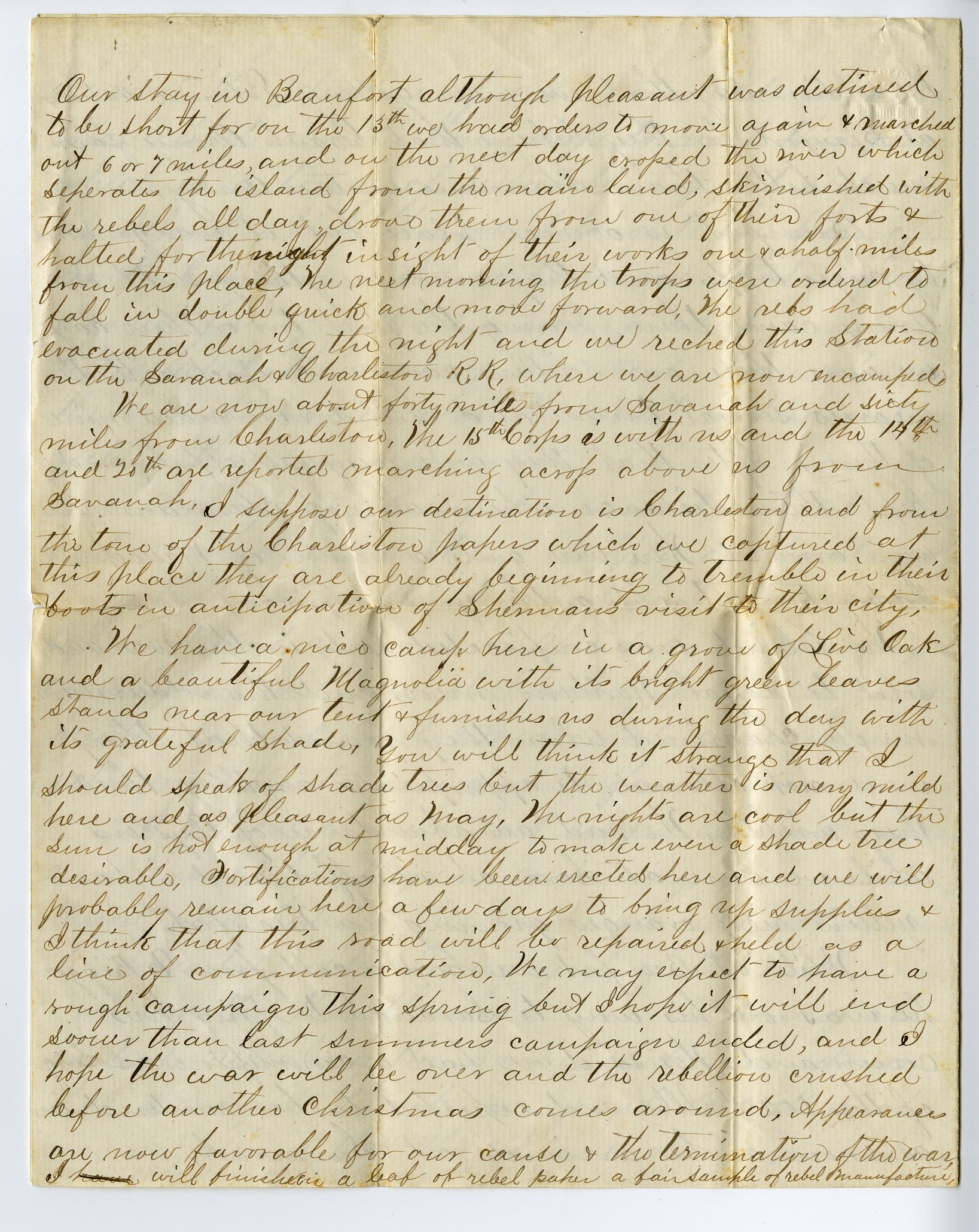 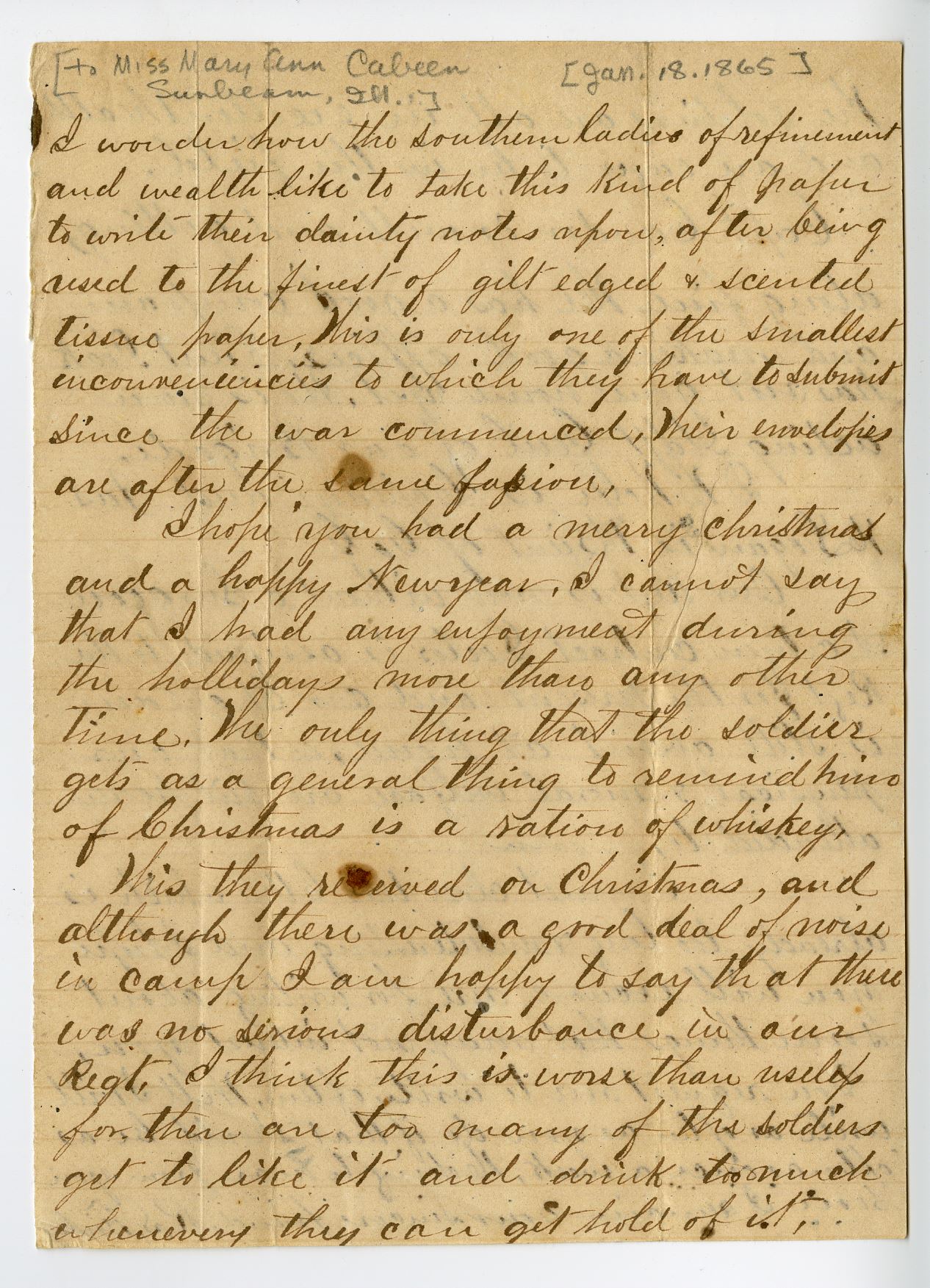 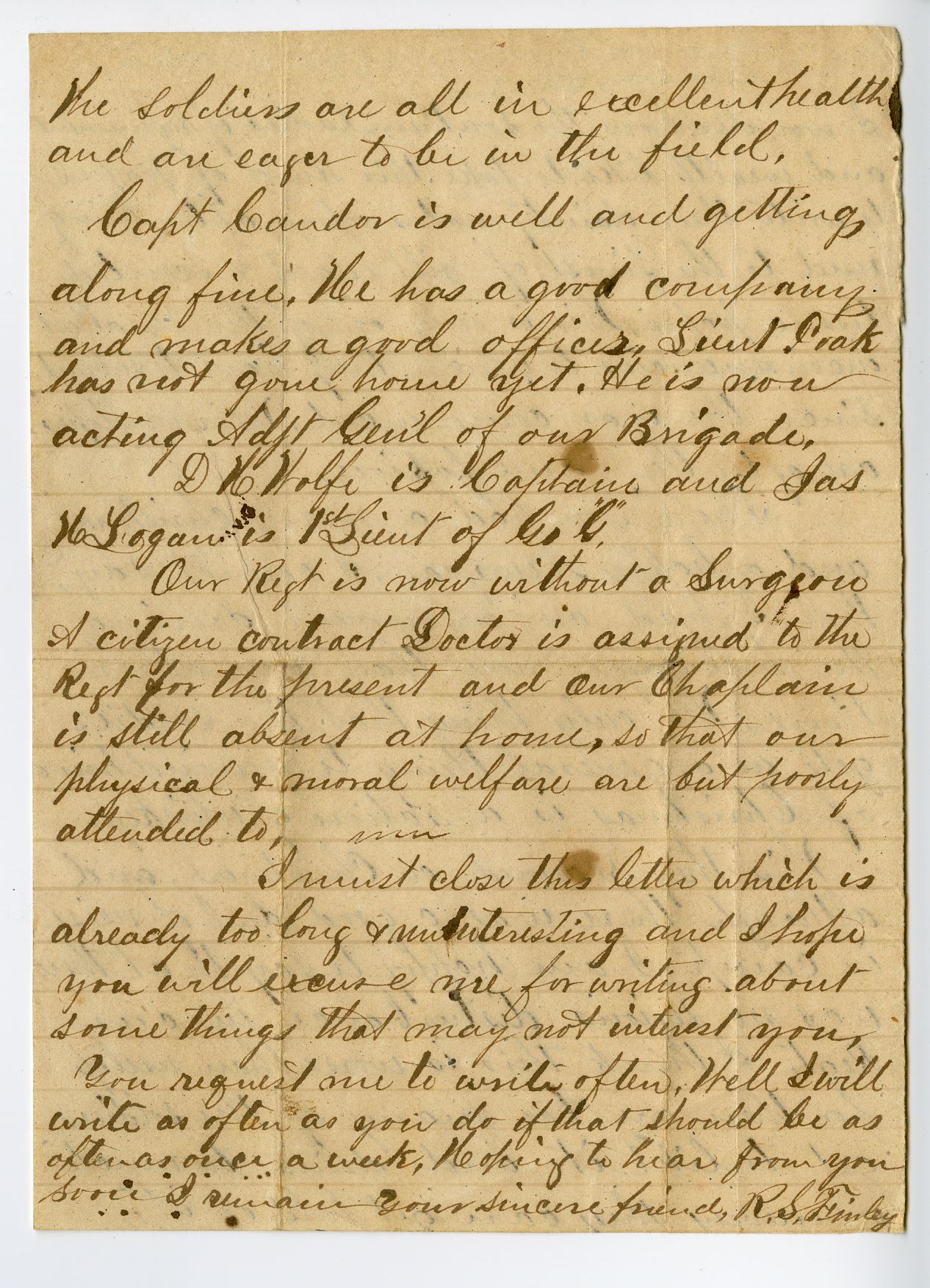 Your welcome letter came to hand last night, and I will try + answer it this evening lest by delay I may not soon have another opportunity, Your letter is the only one I have received from Mercer since we entered the city of Savanah and I was anxious to hear from there, for if any of my folks at home were sick I know you would have written about it.

Since I last wrote you we have been traveling-not far-enough to get a firm foot-hold in the Paluetto State.

After stopping in Savanah from the 21st of Dec. until the 4th of January we had orders to move with all our effects + transportation for some other point. Marching down the river for five or six miles we came to Fort Thunderbolt where we took shipping for the town of Beaufort.  We had the pleasure of a six hours ride on a steam Ship over the briny deep reach this place which is a town of respectable size situated on an Island which however belongs to the State of South Carolina. I luckily escaped that much dreaded feeling called sea sickness which more less affected the most our Regt. Those who were the sickest say it was the most unpleasant feeling they ever experienced.

Arriving at Beaufort we went into camp and received a bountiful supply of almost everything that we needed. We had full rations including soft bread and also were supplied by the Sanitary commission with several barrels of potatoes + onion besides canned fruits + meats-soda crackers-letter paper-envelopes-tobacco and a few housewives.

I got one of these last useful articles (I suppose you know what they are) containing pins-needles thread and buttons, the handiwork no doubt of some kind hearted, soldier loving girl of the North.

I regretted that there was no note among its contents revealing the name of the fair donor that I might thank her for it. But all such may rest assured that the soldier is always grateful even for such small favors. The soldiers say that we were getting Potomac rations at Beaufort for they believe that Grants Army fare much better than Sherman’s western Army.

Beaufort is a nice place but it was garrisoned by negro troops and they ruled everything until our army came there. During the first two or three days we were there our soldiers came in contact with the negroes several times and killed + wounded nine of them. After that they were very respectful and kept their distance when any of Sherman’s men were around. There were quite a number of Massachusetts ladies there teaching the young Africans.

The island was confiscated early in the war and sold to loyal Northern men, and the soldiers were much chagrined when they found that they were not allowed to appropriate anything that they wished. We had an abundance of oysters while we were at Savanah + Beauffort and I saw yellow rich oranges growing in Beaufort.

While at Beaufort we had a call from Dr. Bigges he was on his way to Savanah to join his command, We said he had a commission as Surg. of the 102nd Ills., and expected to be mustered in as soon as he arrived at Savanah.

Our stay in Beaufort although pleasant was destined to be short for on the 13th we had orders to move again + marched out 6 or 7 miles, and on the next day crossed the river which separates the island from the mainland, skirmished with the rebels all day, drove them from out of their forts + halted for the night in sight of their works one + a half miles from this place the next morning the troops were ordered to fall in double quick and move forward. The rebs had evacuated during the night and we reached this Station on the Savanah + Charleston R.R where we are now encamped.

We are now about forty miles from Savanah and sixty miles from Charleston, The 15th Corps is with us and the 14th and the 20th are reported marching across above us from Savanah. I suppose our destination is Charleston and from the town of Charleston papers which we captured at this place they are already beginning to tremble in their boots in anticipation of Sherman’s visit to their city.

We have a nice camp here in a grove of Live Oak and a beautiful Magnolia with its bright green leaves strands near our tent + furnishes us during the day with its grateful Shade. You will think it strange that I should speak of shade trees but the weather is very mild here and as pleasant as May, the nights are cool but the Sun is hot enough at midday to make even a shade tree desirable. Fortifications have been erected here and we will probably remain here a few days to bring up supplies + I think that this road will be repaired + held as a line of communication. We may expect to have a rough campaigning this spring but I hope it will end sooner than last summers campaign ended, and I hope the war will be over and the rebellion crushed before another Christmas comes around. Appearances are now favorable for our cause + the termination of the war , Will finish a leaf of rebel paper a fair sample of rebel manufacture. I wonder how the southern ladies of refinement and wealth like to take this kind of paper to write their dainty notes upon, after being used to the finest of gilt edged + scented tissue paper. This is only one of ht smallest inconveniences to which they have to submit since the war commenced, their envelopes are after the same fashion.

I hope you had a merry christmas and a happy New Year. I cannot say that I had any enjoyment during the hollidays more than any other time. The only thing that the soldier gets as a general thing to remind him of Christmas is a ration of whiskey.

This they received on Christmas and although there was a good deal of noise in camp I am happy to say that There was no serious disturbance in our Regt. I think this is worse than useless for there are too many of the soldiers get to like it and drink too much whenever they can get a hold of it. The soldiers are all in excellent health and are eager to be in the field.

Capt. Candor is well and getting along fin. He has a good company and makes a good offices Lieut Prak has not gone home yet. He is now acting Adjt Gen’l of our Brigade.

Our Regt is now without a Surgeon A citizen contract Doctor is assigned to the Regt for the present and our Chaplain is still absent at home, so that our physical + moral welfare are but poorly attended to.

I must close this letter which is already too long + uninteresting and I hope you will excuse me for writing about some things that may not interest you. You request me to write often. Well I will write as often as you do if that should be as often as once a week. Hoping to hear from you soon. I remain your sincere friend, R.S. Finley