12 February 1865: “The shells were thrown at the fort but when they exploded, the fragments flew in different directions, which caused us to do some tall dodging.”

Item Description:  Letter written by Zaccheus Ellis to his sister.  He discusses the living arrangements at Fort Anderson in North Carolina including the shelling by Union gunboats.  He also mentions fall in morale regarding Wilmington and lack of faith in the command of General Bragg.  He also talks about politics, arming slaves, and runaway slaves.  He was killed in action at Bentonville, N.C. 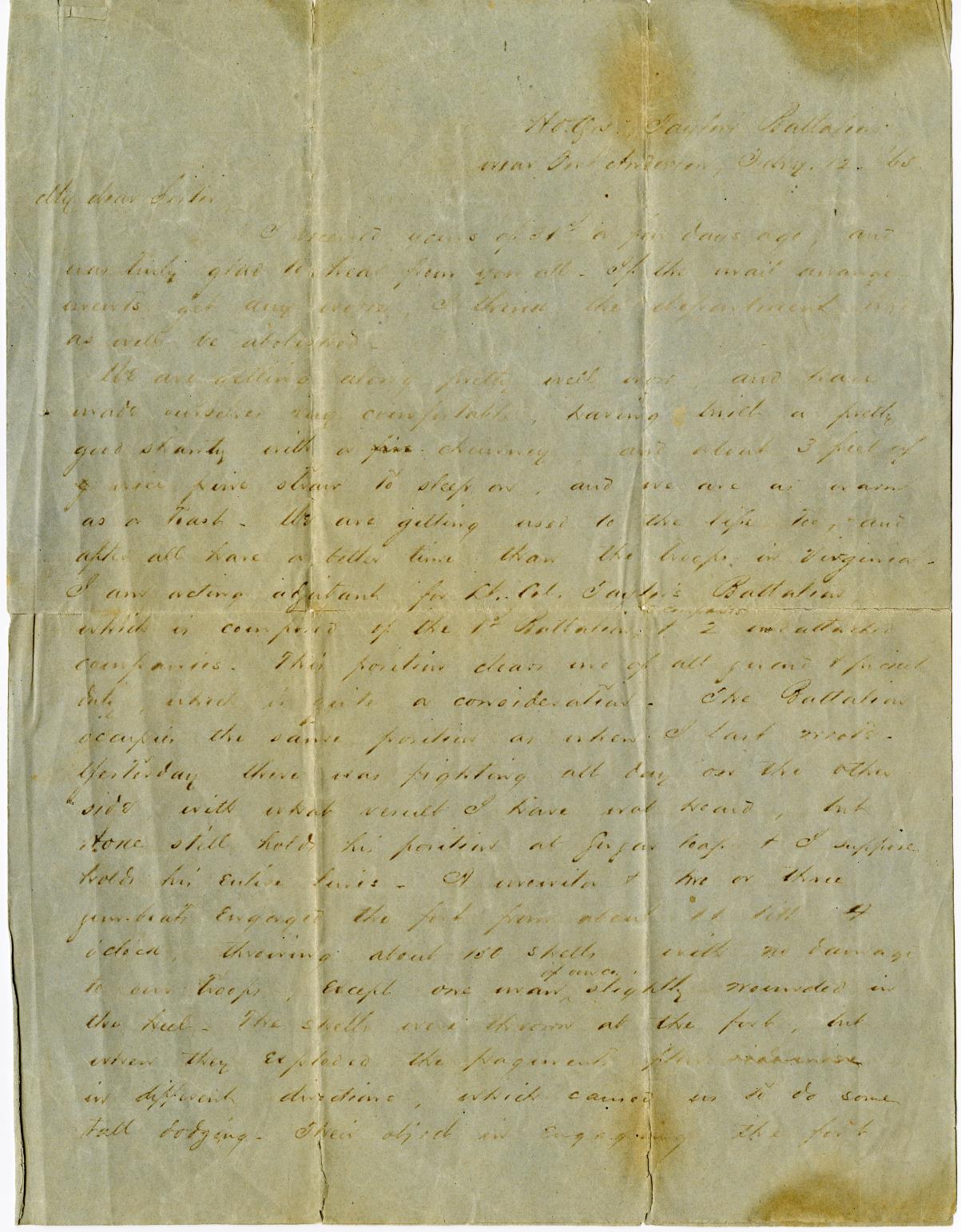 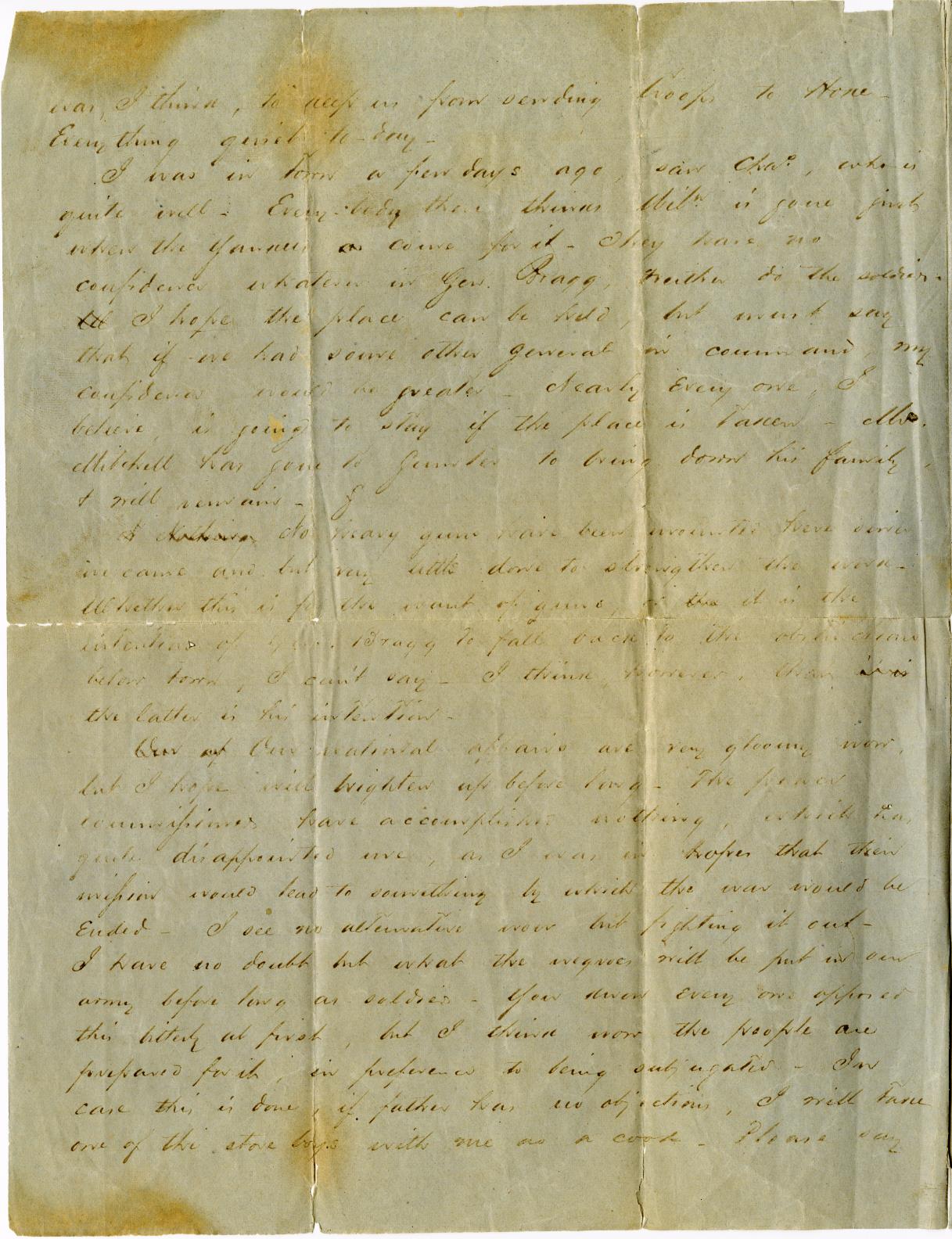 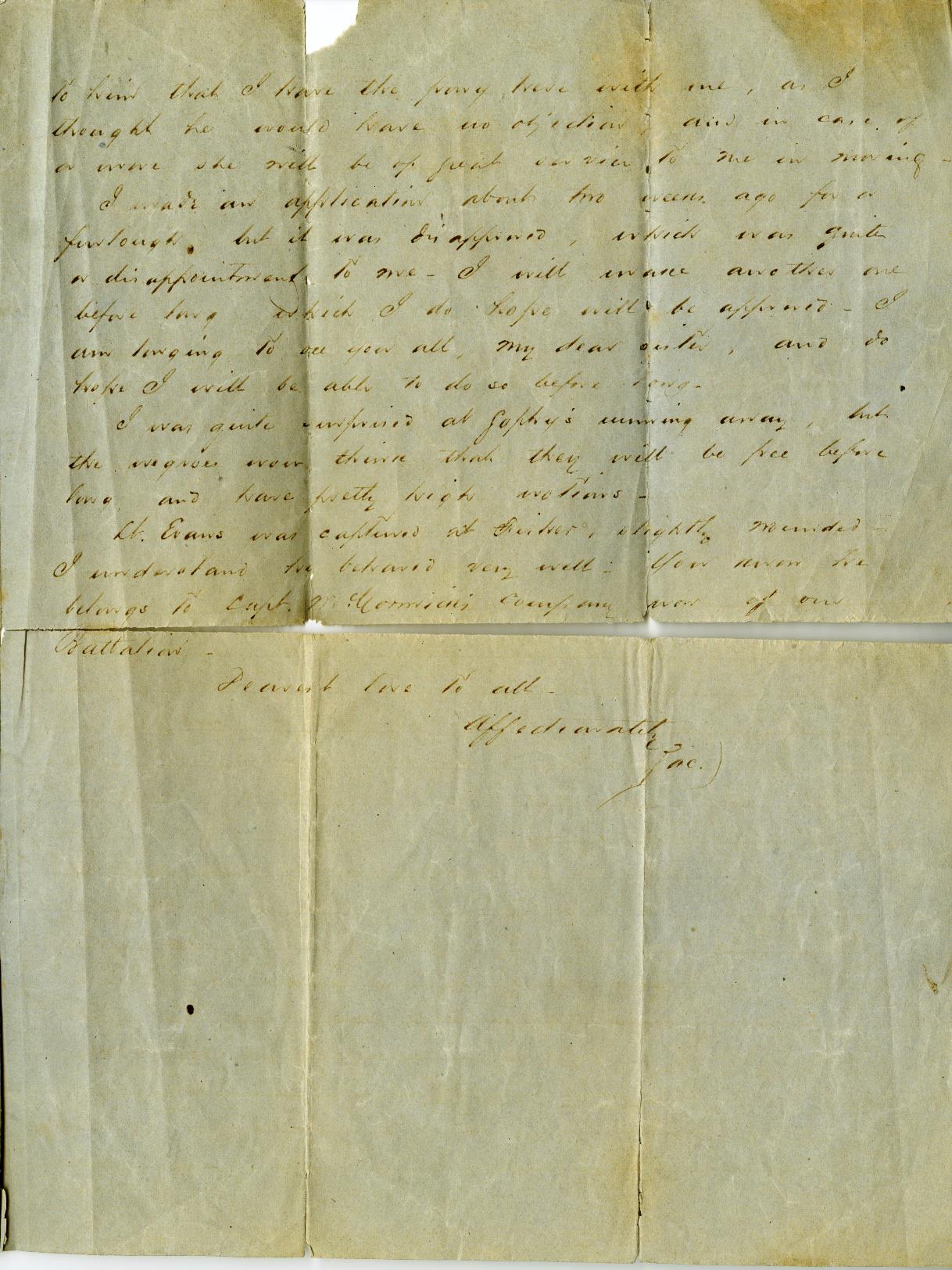 I received yours of 31st a few days ago, and was truly glad to hear from you all. If the mail arrangements get any worse, I think the department might as well be abolished.

We are getting along pretty well now and have made ourselves very comfortable having built a pretty good shanty with a chimney, and about 3 feet of nice fine straw to sleep on, and we are as warm as a toast. We are getting used to the life too, and after all have a better time than the troops in Virginia.

I am acting adjutant for Lt. Col. Taylor’s Battalion which is comprised of the 1st Battalion and 2 attached companies. This posting clears me of all guard and picket duty, which is quite a consideration. The Battalion occupies the same position as when I last wrote. Yesterday there was fighting all day on the other side with what result I have not heard. But Hoke still holds his position at Sugar Loaf and I suppose holds his entire lines. A monitor, and two or three gunboats engage the fort from about 11 till 4 o’clock, throwing about 150 shells, with no damage to our troops, except one man of our co. was slightly wounded in the heel. The shells were thrown at the fort but when they exploded, the fragments flew in different directions, which caused us to do some tall dodging. Their object in engaging the fort was, I think, to keep us from sending troops to Hoke. Everything quiet today.

I was in town a few days ago, saw Chas., who is quite well. Everybody there thinks Wiln is gone just when the Yankees come for it. They have no confidence whatever in Gen. Bragg, neither do the soldiers. I hope the place can be held, but must say that if we had some other general in command, my confidence would be greater. Nearly everyone, I believe, is going to stay if the place is taken. Mr Mitchell has gone to Sumter to bring down his family, and will remain.

No heavy guns have been mounted since we came, and but very little done to strengthen the works. Whether this is for the want of guns or it is intention of Gen. Bragg to fall back to the obstrts below town I can’t say. I think, however, that the latter is his intention.

Our national affairs are very gloomy now but I hope will brighten up before long. The peace commissions have accomplished nothing, which has quite disappointed me, and was in hopes that the mission would lead to something by which the war would be ended. I see no alternative now but fighting it out. I have no doubt but what the negroes will be put in our army, before long as soldiers. You know everyone opposed this bitterly at first, but I think now the people are prepared for it, it preference to being subjected. In care this is done, if father has no objections, I will take one of the stove boys with me as a cook. Please say to him that I have the pony here with me, as I thought he would have no objections, and in case of a move she will be of great service to me in moving.

I made an application about two weeks ago for a furlough but it was disapproved, which was quite a disappointment to me. I will make another one before long which I do hope will be approved. I am longing to see you all, my dear sister, and do hope I will be able to do so before long.

I was quite surprised at Sophy’s running away but the negroes now think that they will be free before long, and have pretty high notions.

Lt. Evans was captured at Fisher, slightly wounded I understand he behaved very well. You know he belongs to Capt. McCormick’s company now of our Battalion.

Dearest love to all