Posted on 15 Feb ’15 by Rebecca Williams

Item Description: Entry, dated 15 February 1865, from the diary of Emma Florence LeConte, the daughter of scientist Joseph LeConte of Columbia, S.C. Emma writes about the impending destruction of Columbia. 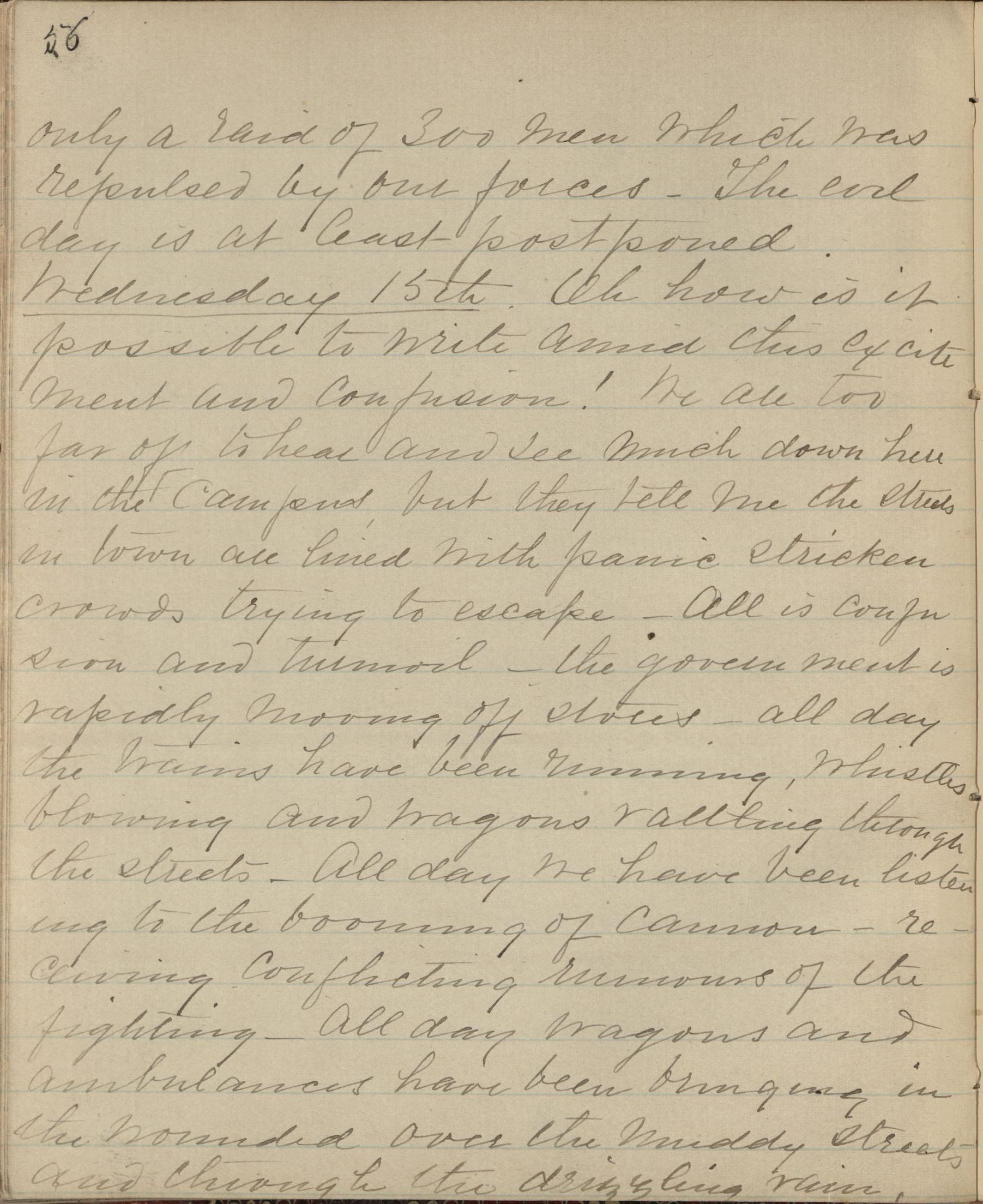 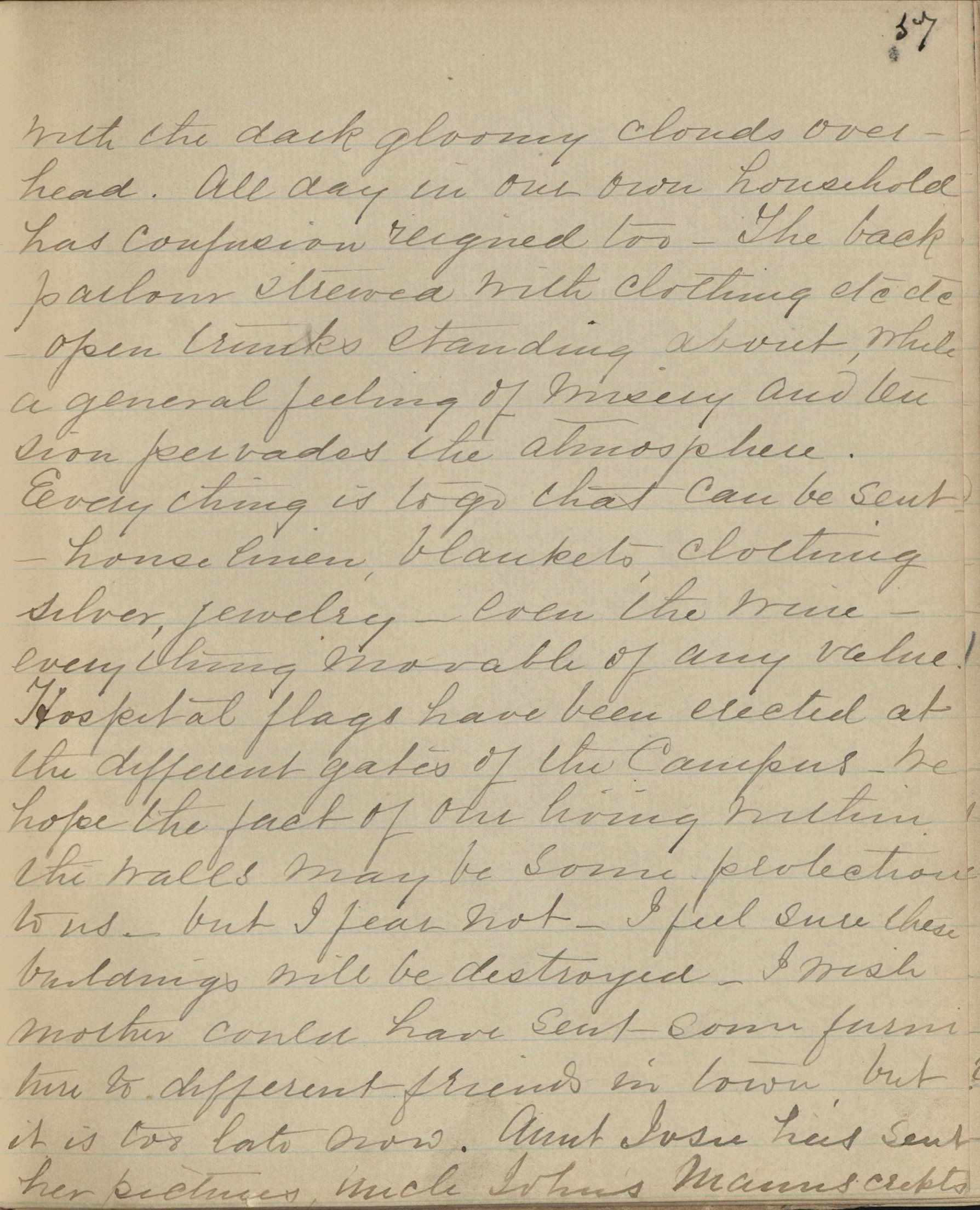 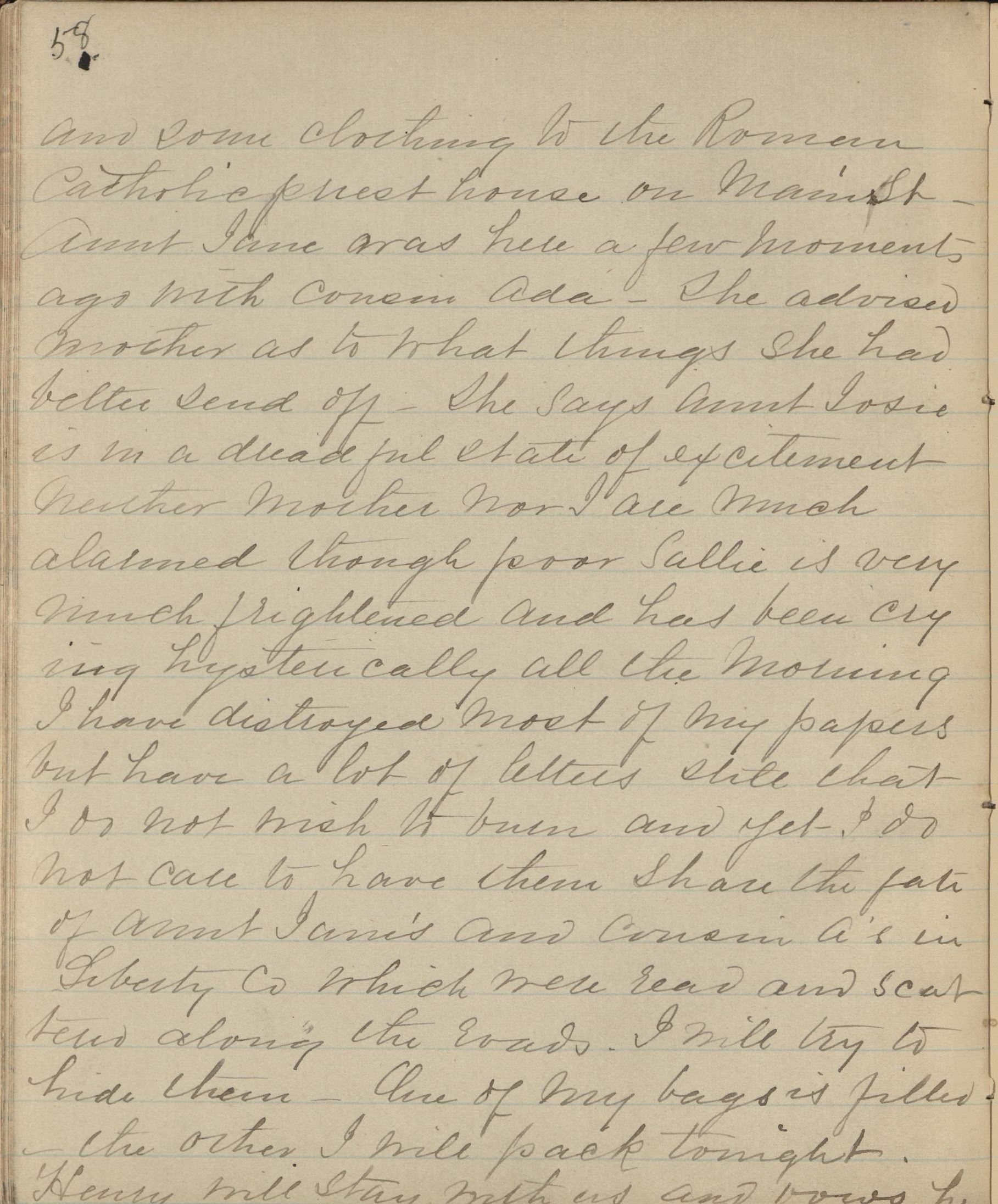 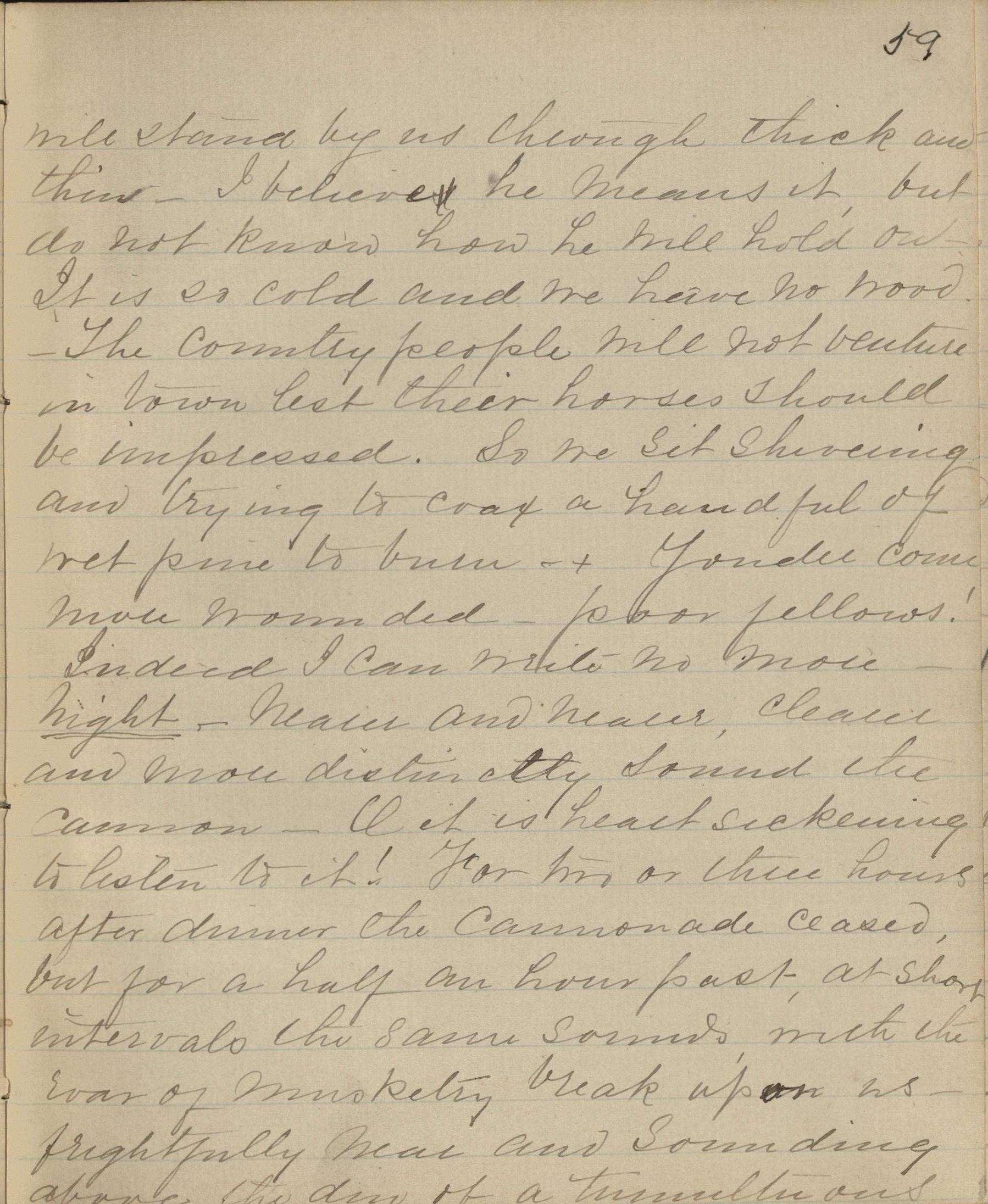 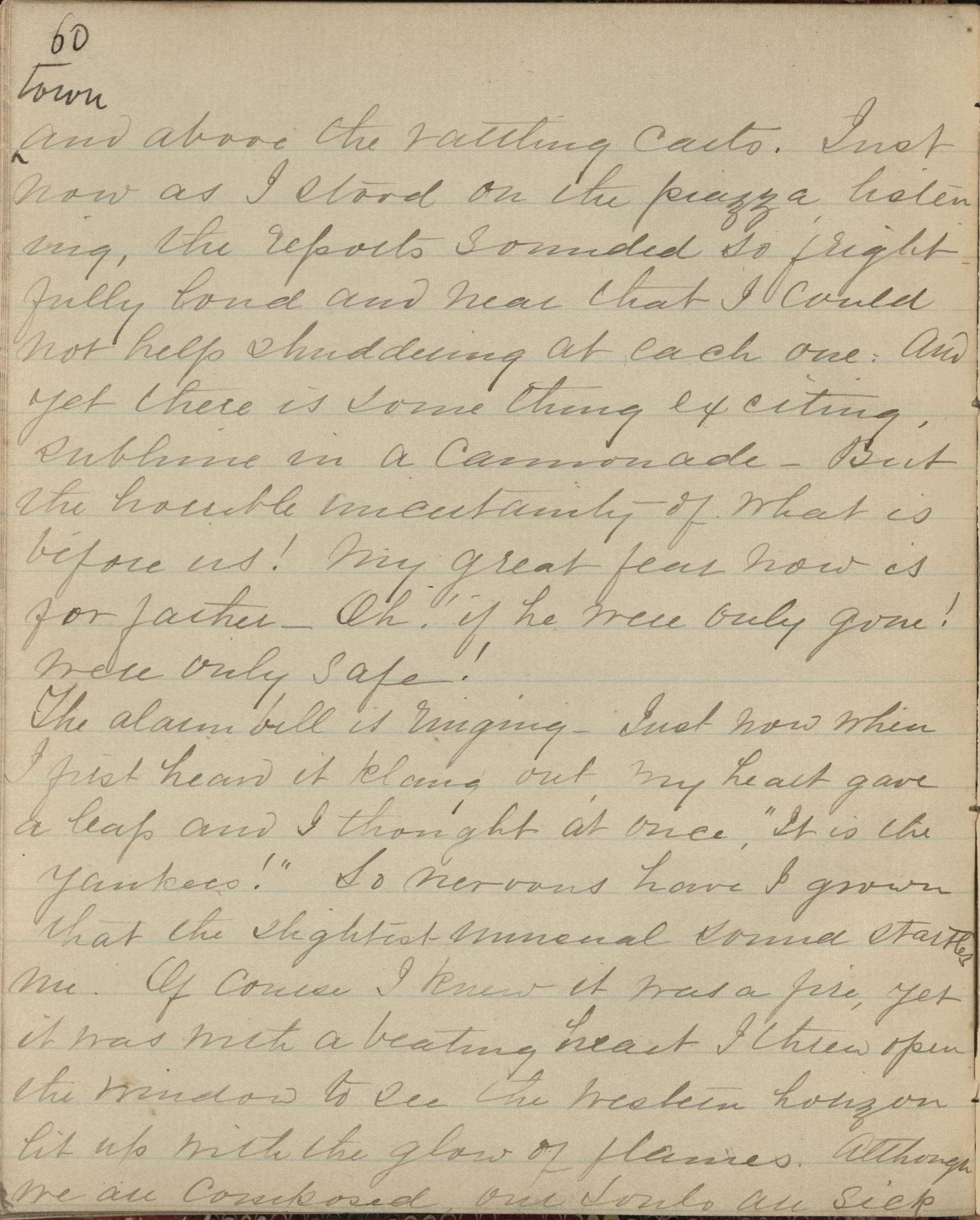 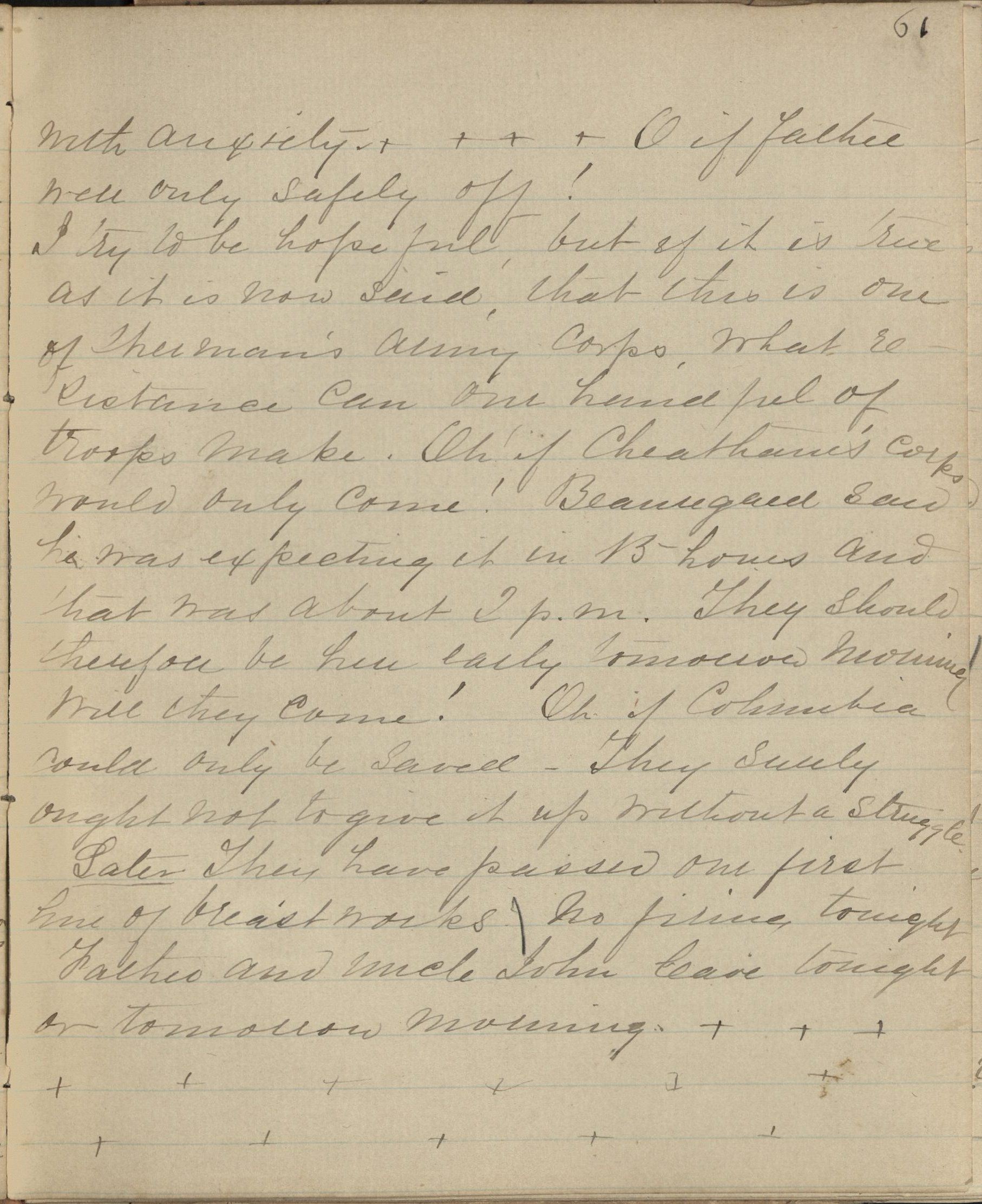 Wednesday Feb. 15th.
Oh, how is it possible to write amid this excitement and confusion! We are too far off to hear and see much down here in the Campus, but they tell me the streets in town are lined with panic-stricken crowds, trying to escape. All is confusion and turmoil. The Government is rapidly moving off stores – all day the trains have been running, whistles blowing and wagons rattling through the streets. All day we have been listening to the booming of cannon – receiving conflicting rumors of the fighting. All day wagons and ambulances have been bringing in the wounded over the muddy streets and through the drizzling rain, with the dark gloomy clouds overhead. All day in our own household has confusion reigned too. The back parlor strewed with clothing etc., open trunks standing about, while a general feeling of misery and tension pervaded the atmosphere. Everything is to go that can be sent – houselinen, blankets, clothing, silver, jewelry – even the wine – everything movable of any value. Hospital flags have been erected at the different gates of the Campus – we hope the fact of our living within the walls may be some protection to us, but I fear not. I feel sure these buildings will be destroyed. I wish mother could have sent some furniture to different friends in town, but it is too late now. Aunt Josie has sent her pictures, Uncle John’s manuscripts and some clothing to the Roman Catholic priest’s house on Main St. Aunt Jane was here a few moments ago and advised mother as to what things she had better send off. She says Aunt Josie is in a dreadful state of excitement. Neither mother nor I are much alarmed, though poor Sallie is very much frightened and has been crying hysterically all the morning. I have destroyed most of my papers, but have a lot of letters still that I do not wish to burn, and yet I do not care to have them share the fate of Aunt Jane’s and Cousin Ada’s in Liberty Co., which were read and scattered along the roads. I will try to hide them. One of my bags is filled. The other I will pack tonight. Henry will stay with us, and vows he will stand by us through thick and thin – I believe he means it, but do not know how he will hold on. It is so cold and we have no wood. The country people will not venture in town lest their horses should be impressed. So we sit shivering and trying to coax a handful of wet pine to burn. *** Yonder come more wounded – poor fellows – indeed I can write no more. Night Nearer and nearer, clearer and more distinctly sound the cannon – Oh, it is heart-sickening to listen to it! For two or three hours after dinner the cannonade ceased, but for a half an hour past the same sounds, with the roar of musketry, break upon us – frightfully near and sounding above the din of a tumultuous town and above the rattling carts. Just now as I stood on the piazza listening, the reports sounded so frightfully loud and near that I could not help shuddering at each one. And yet there is something exciting – sublime – in a cannonade. But the horrible uncertainty of what is before us! My great fear now is for father – Oh, if he were only gone – were only safe!

The alarm bell is ringing. Just now when I first heard it clang out my heart gave a leap, and I thought at once – “It is the Yankees”. So nervous have I grown that the slightest unusual sound startles me. Of course I knew it was a fire, yet it was with a beating heart I threw open the window to see the western horizon lit up with the glow of flames. Although we are composed our souls are sick with anxiety. ***** Oh, if father were only safely off! I try to be hopeful, but if it is true, as it is said, that this is one of Sherman’s army corps, what resistance can our handful of troops make? Oh, if Cheatham’s corps would only come! Beauregard said he was expecting it in 13 hours, and that was about 2 p.m. They should therefore be here early tomorrow morning – will they come? Oh, if Columbia could only be saved! They surely ought not to give it up without a struggle.

Later – They have passed our first line of breastworks. No firing tonight. Father and Uncle John leave tonight or tomorrow morning. – **