16 February 1865: “He calls himself a Confederate spy or scout and is an oddity”

Posted on 16 Feb ’15 by Rebecca Williams 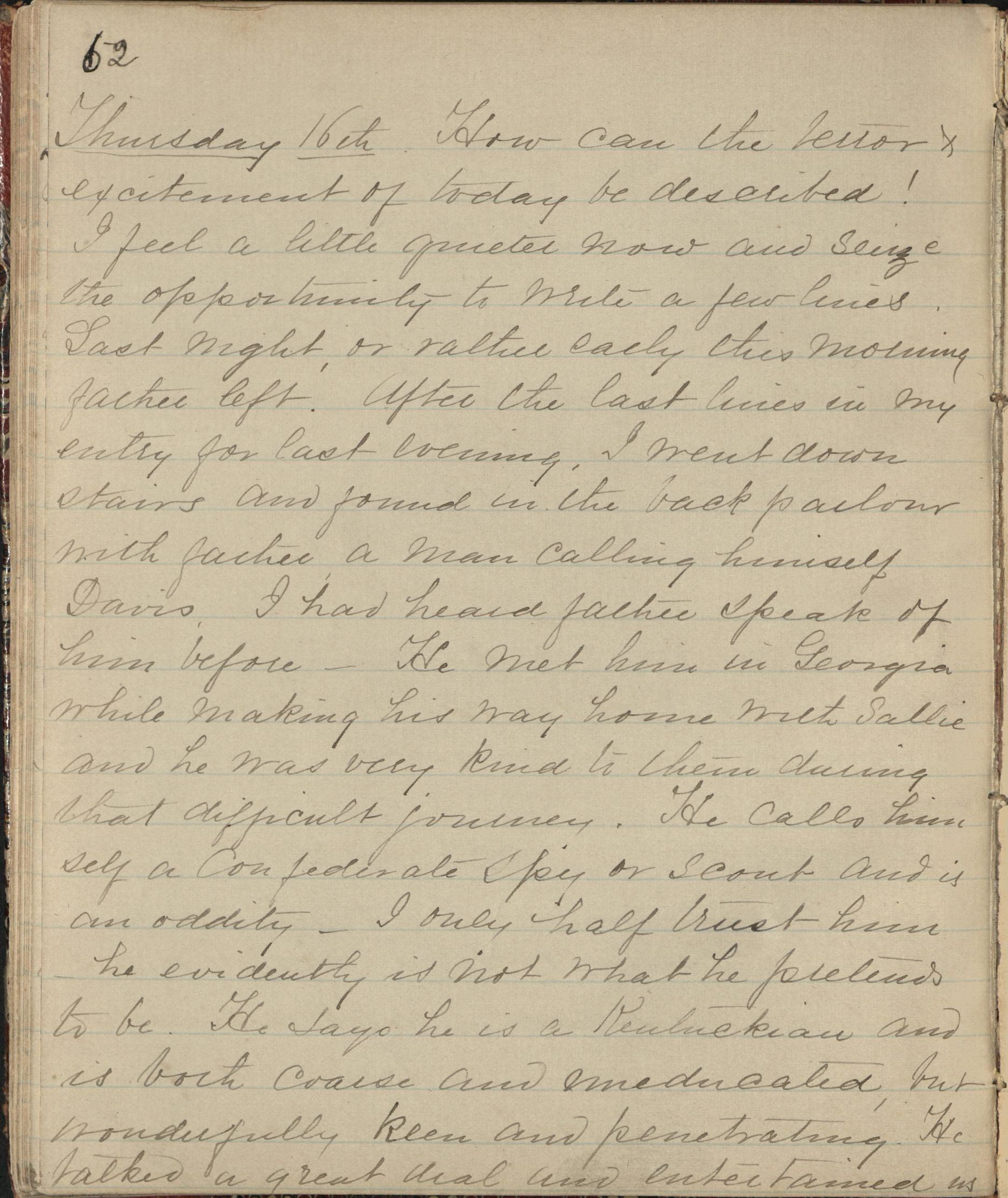 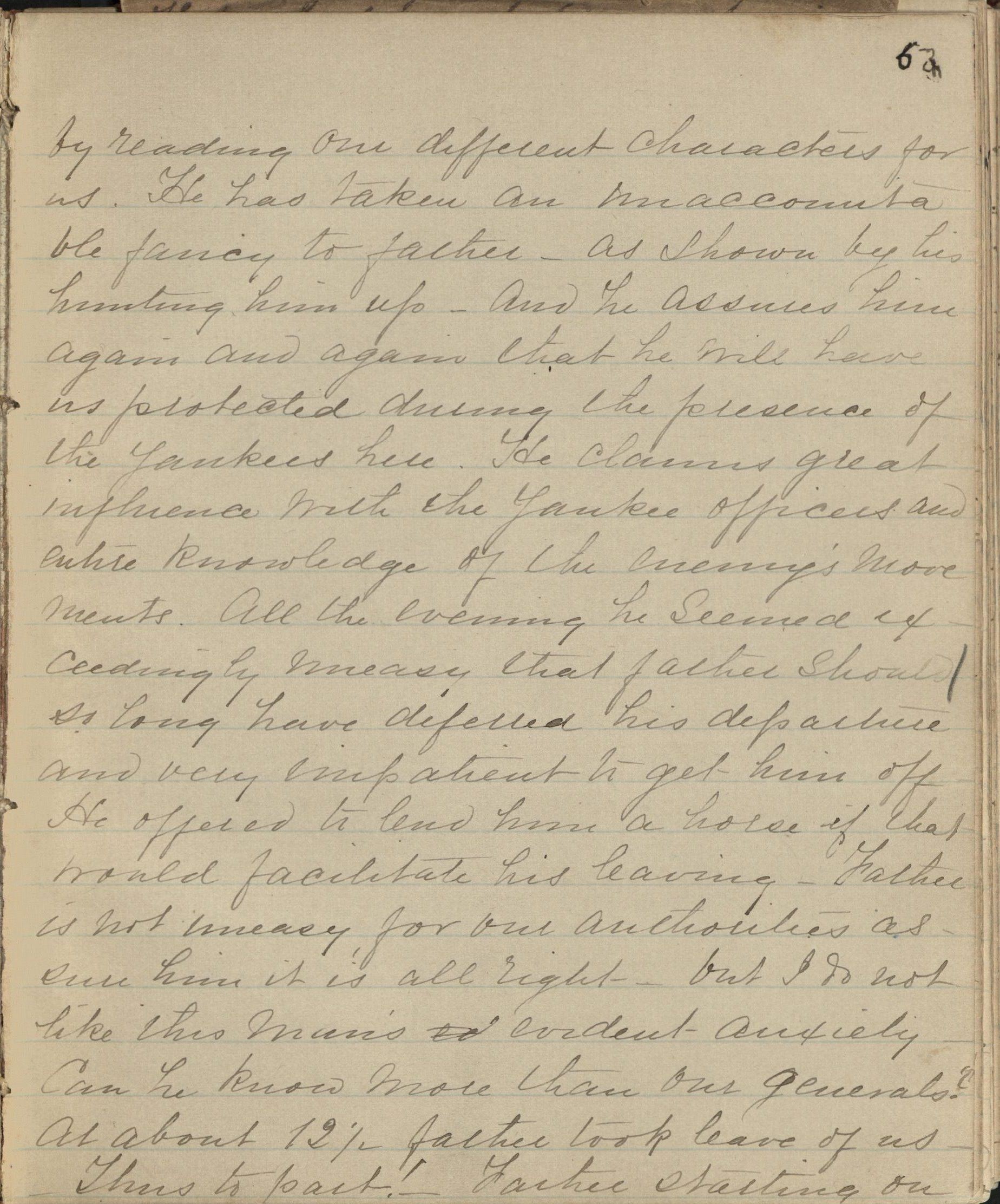 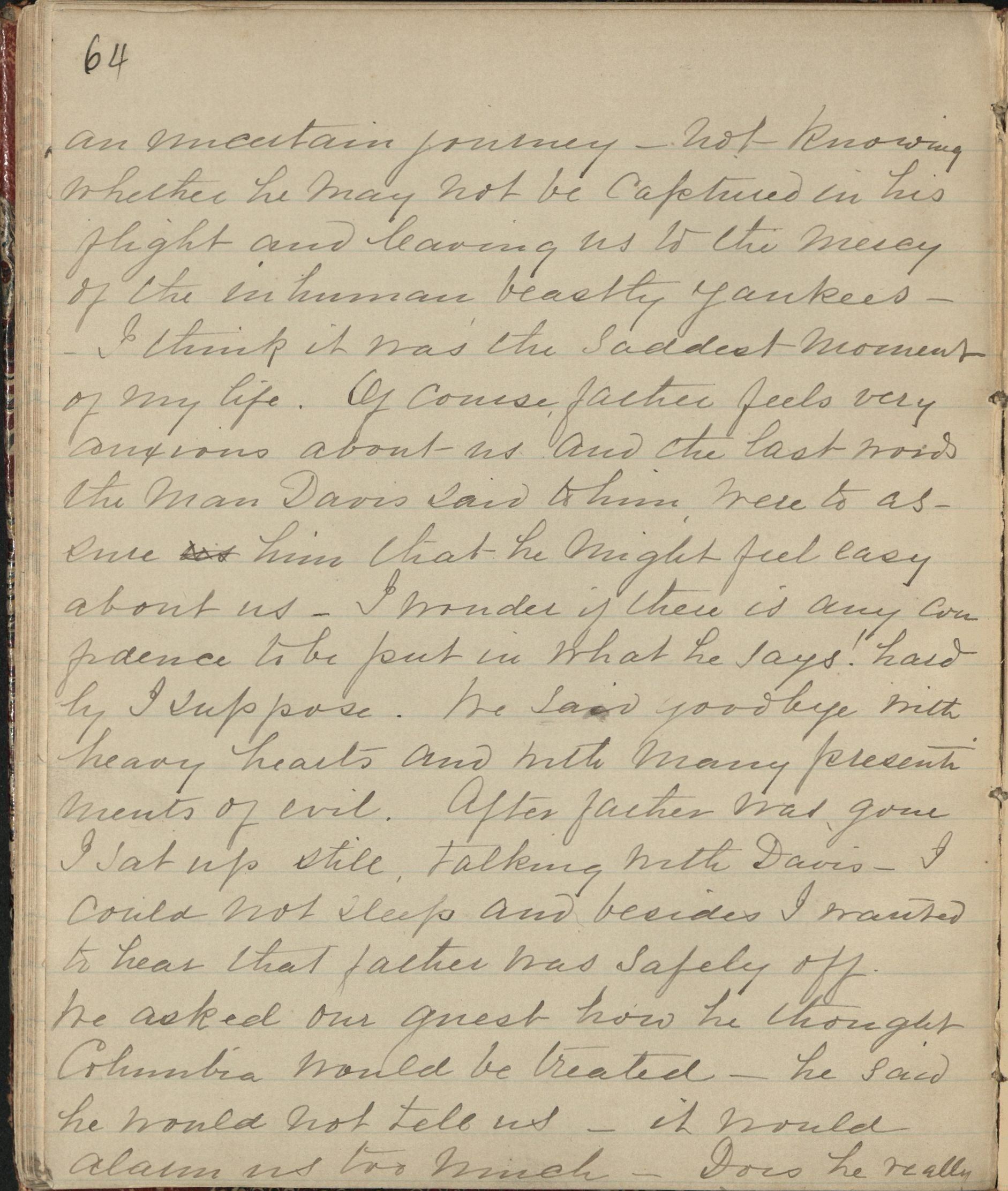 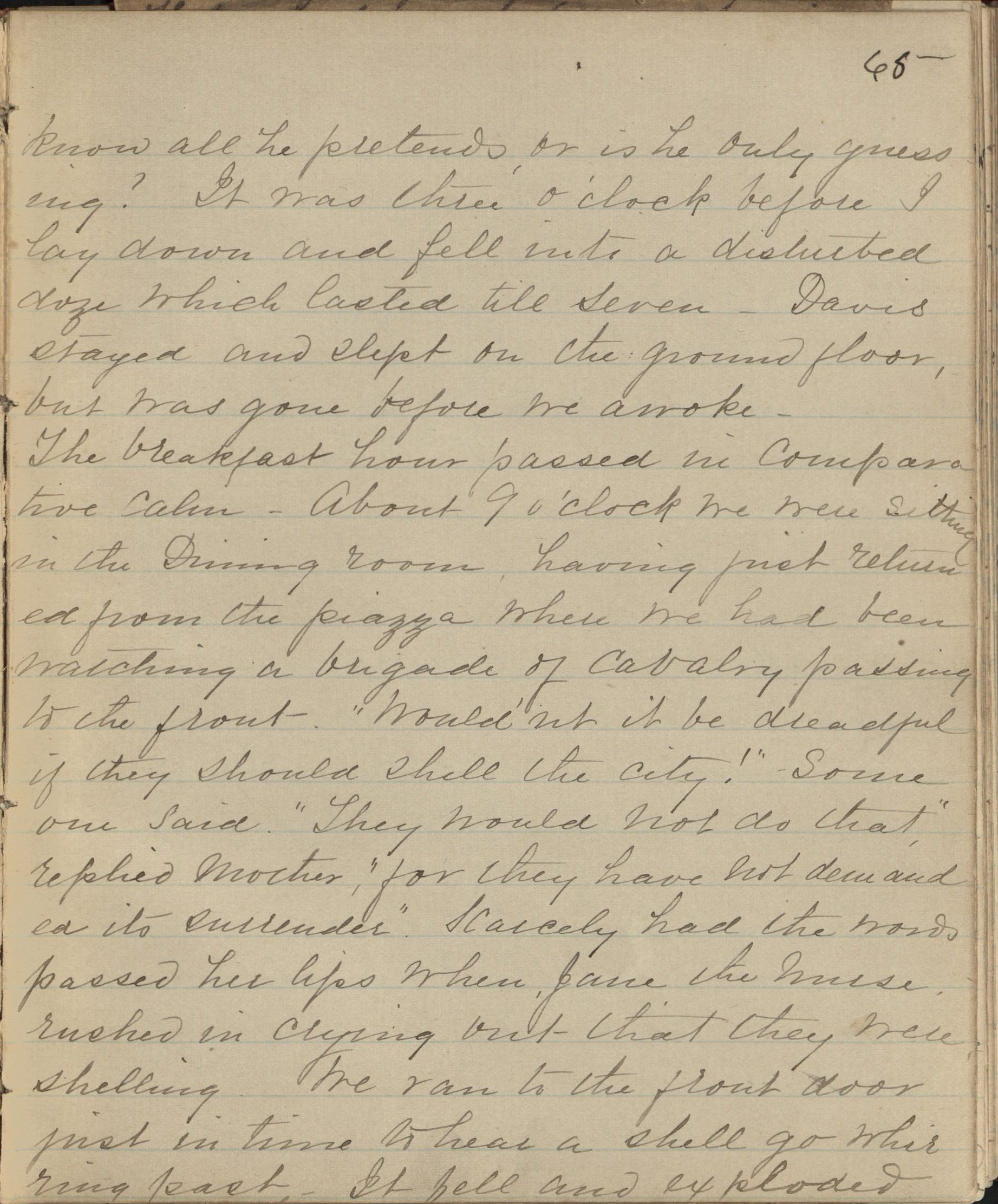 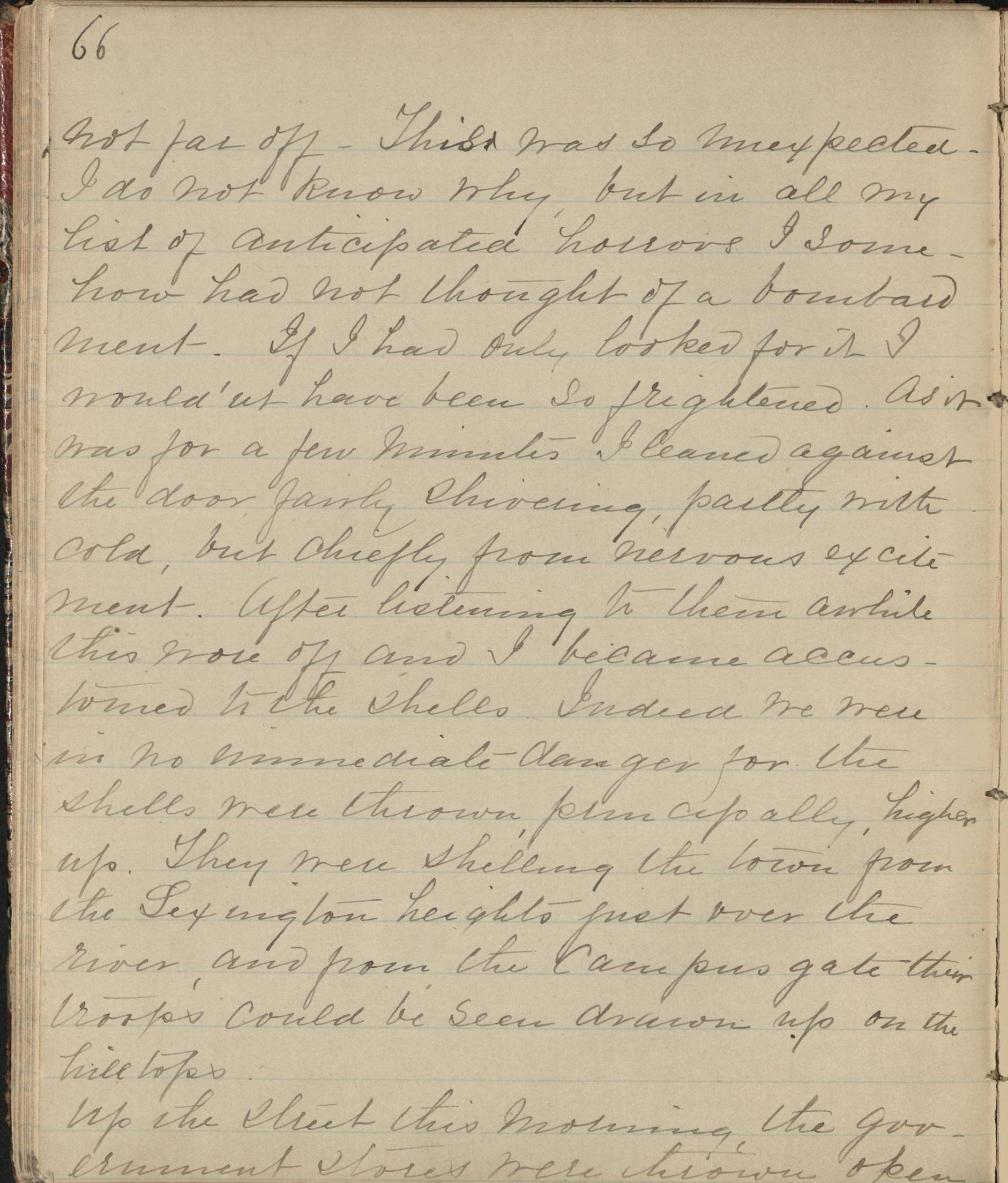 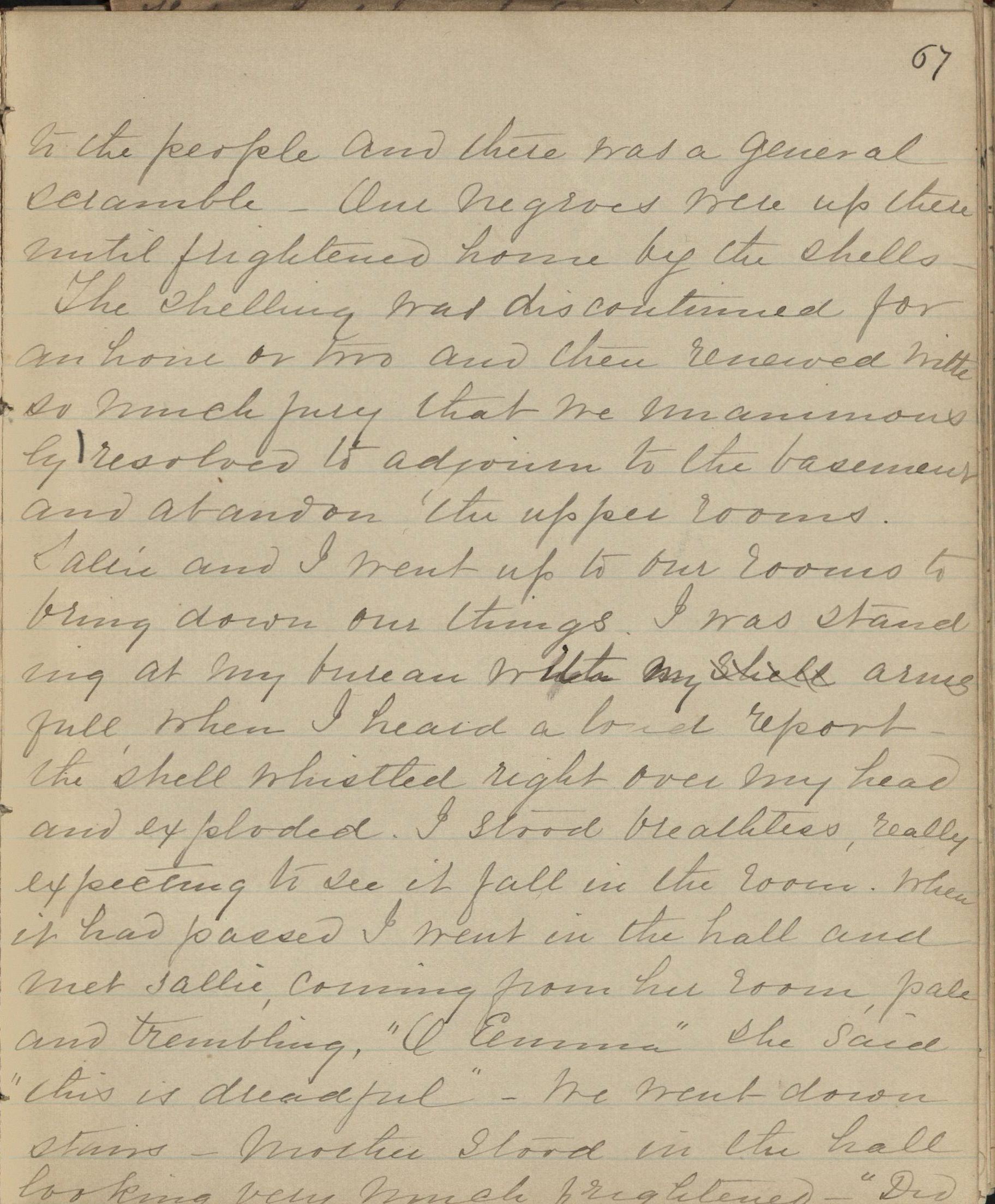 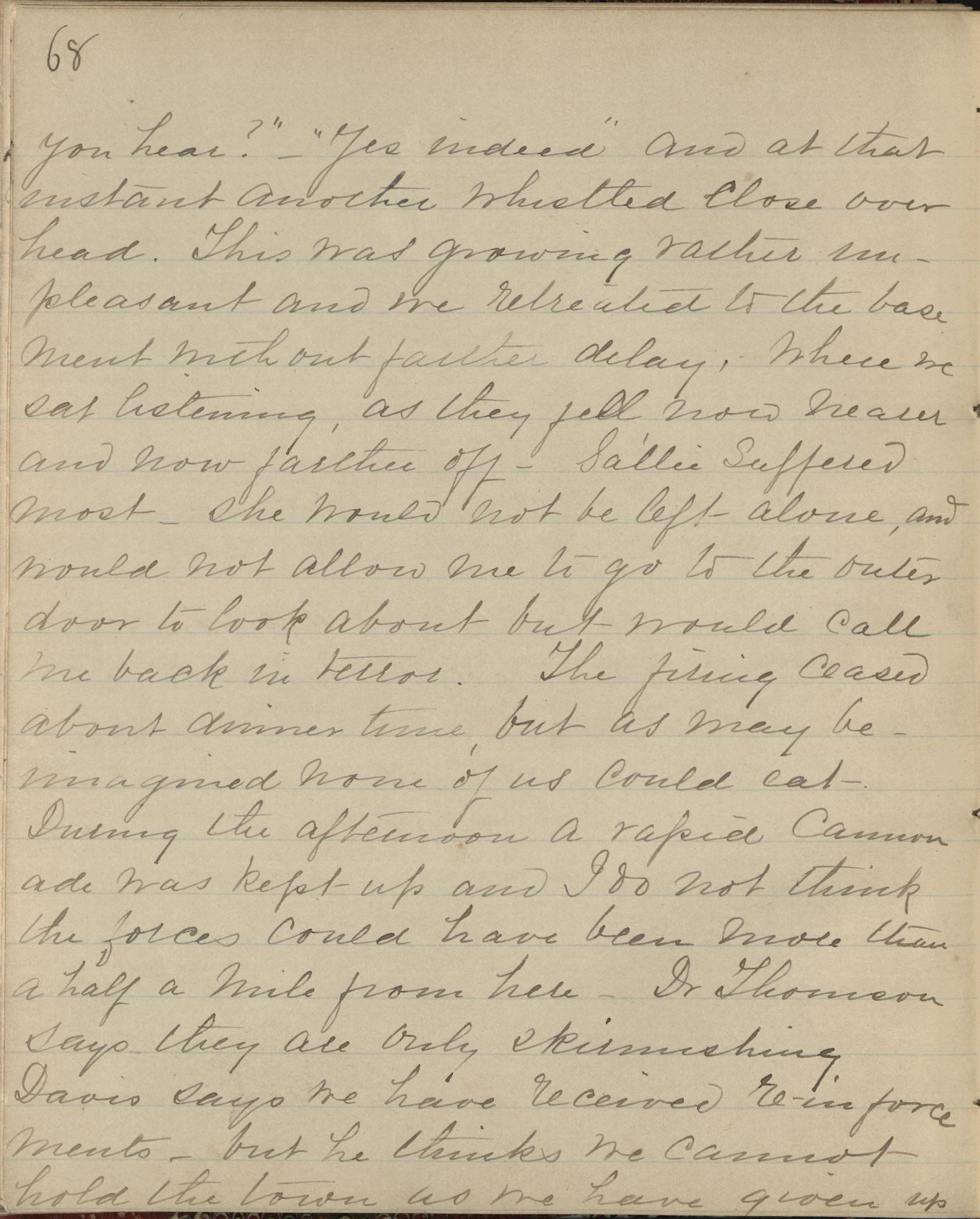 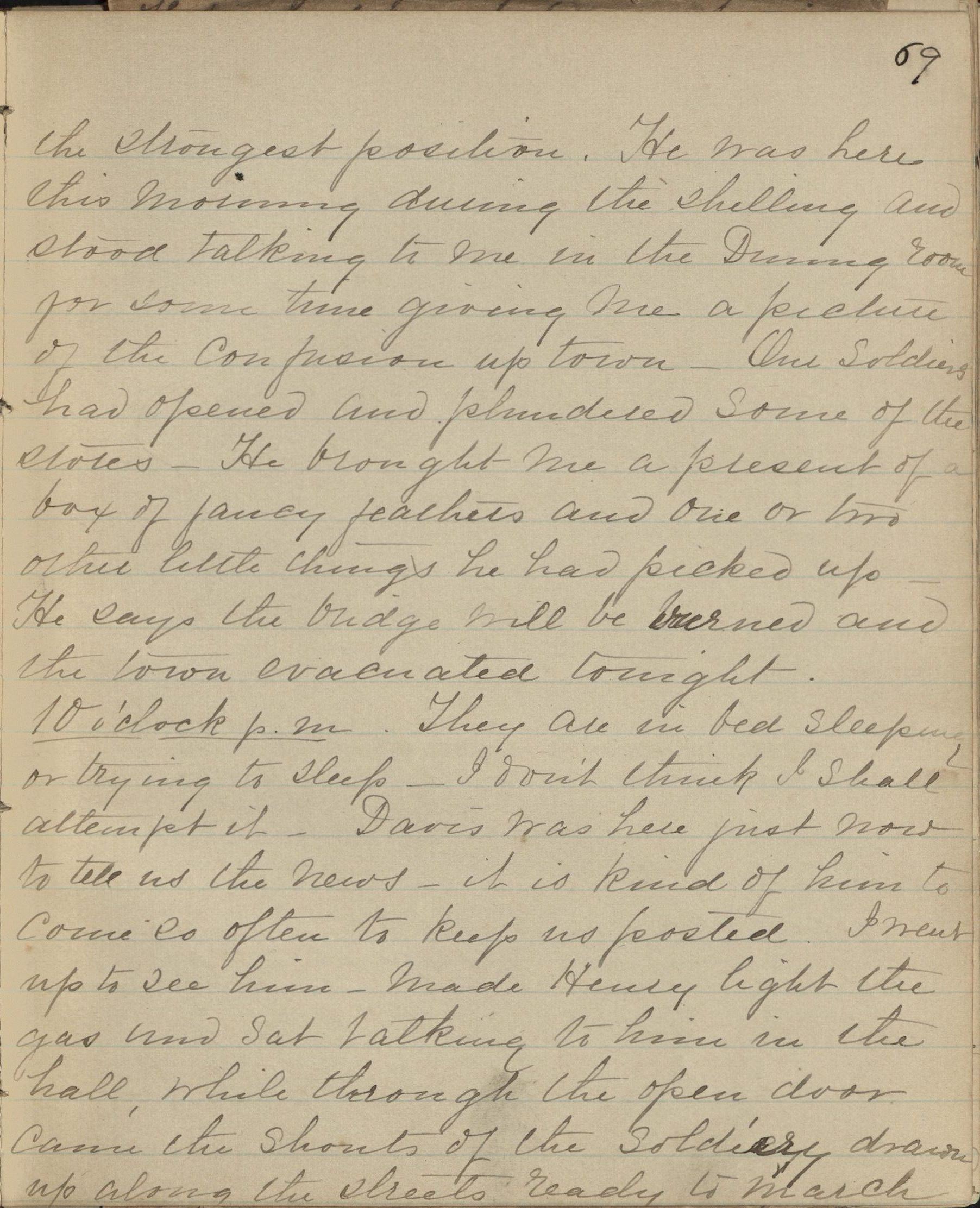 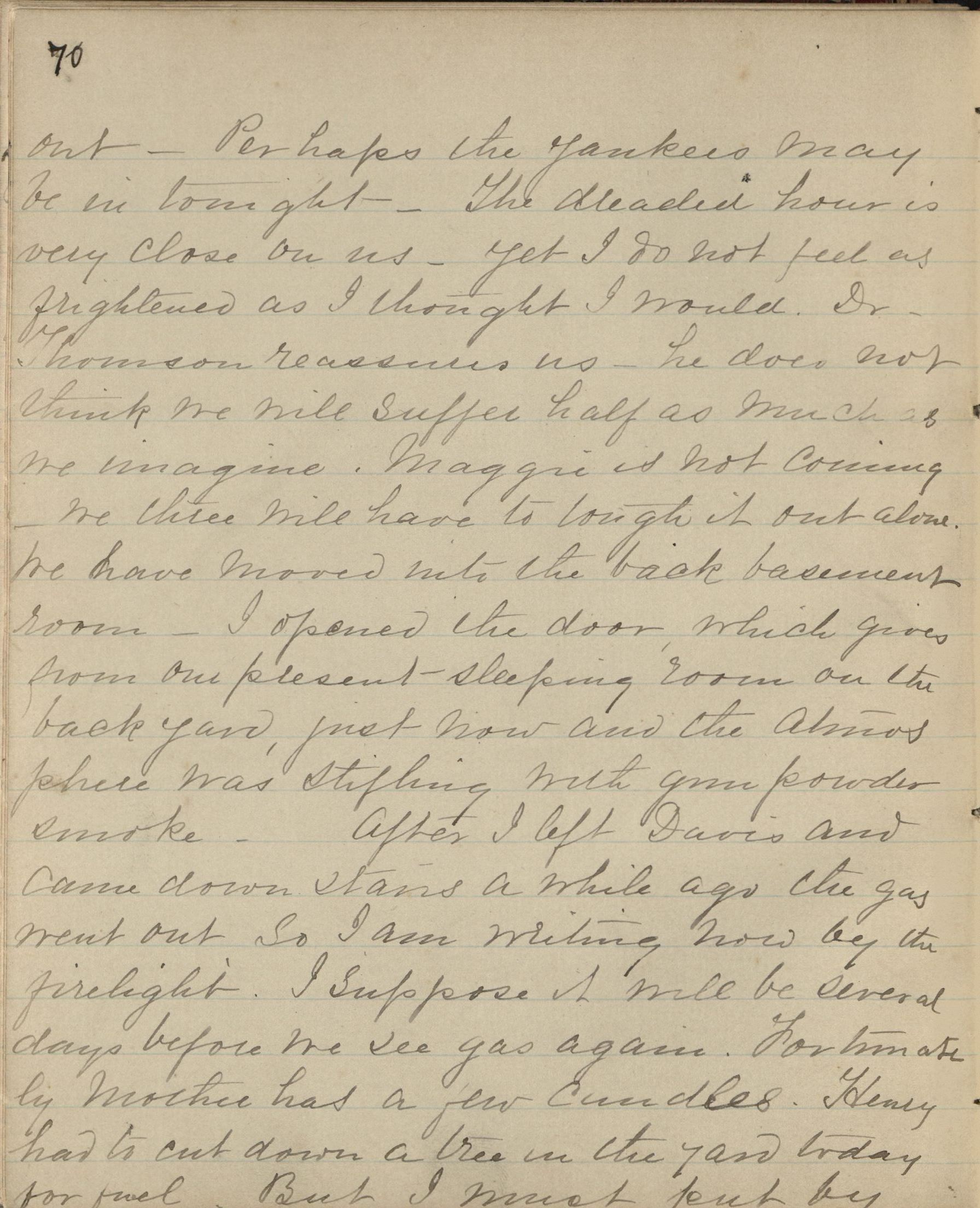 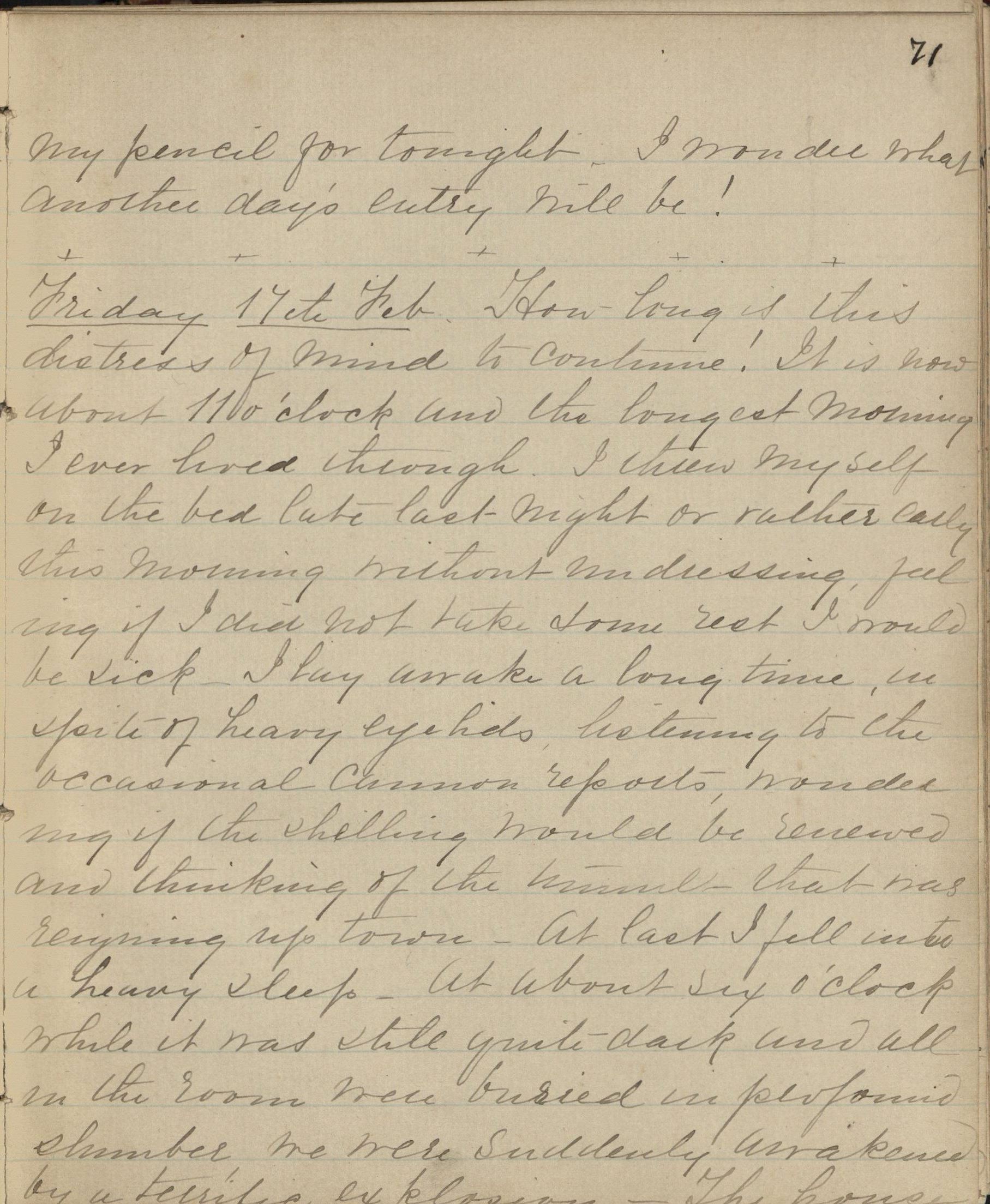 Thursday 16th. Feb.
How can the terror and excitement of today be described! I feel a little quieter now and seize the opportunity to write a few lines. Last night, or rather early this morning, father left. After the last lines in my entry last evening, I went downstairs and found in the back parlor with father a man calling himself Davis. I had heard father speak of him before. He met him in Georgia while making his way back home with Sallie, and he was very kind to them during that difficult journey. He calls himself a Confederate spy or scout and is an oddity. I only half trust him – he evidently is not what he pretends to be. He says he is a Kentuckian and is both coarse and uneducated, but wonderfully keen and penetrating. He talked a great deal and entertained us by reading our different characters for us. He has taken an unaccountable fancy to our father – as shown by his hunting him up – and he assures him again and again that he will have us protected during the presence of the Yankees here. He claims great influence with the Yankee officers and entire knowledge of the enemy’s movements. All the evening he seemed exceedingly uneasy that father should so long have deferred his departure and very impatient to get him off. He offered to lend him a horse if that would facilitate his leaving. Father is not uneasy, for our authorities assure him that all is right, but I do not like this man’s evident anxiety. Can he know more than the Generals? About half-past twelve father took leave of us. Thus to part! Father starting on an uncertain journey – not knowing whether he may not be captured in his flight, and leaving us to the mercy of the inhuman beastly Yankees – I think it was the saddest moment of my life. Of course father feels very anxious about us, and the last words the man Davis said to him were to assure him that he might feel easy about us. I wonder if there is any confidence to be put in what he says! Hardly, I suppose. We said goodbye with heavy hearts and with many presentiments of evil. After father was gone I sat up still, talking with Davis. I could not sleep, and besides I wanted to hear that father was safely off. We asked our guest how he thought Columbia would be treated – he said he would not tell us – it would alarm us too much. Does he really know all he pretends, or is he only guessing? It was three o’clock before I lay down and fell into a disturbed doze which lasted till seven. Davis stayed and slept on the ground floor, but was gone before we awoke. The breakfast hour passed in comparative calm. About nine o’clock we were sitting in the dining room, having just returned from the piazza where we had been watching a brigade of cavalry passing to the front. “Wouldn’t it be dreadful if they should shell the city?” someone said – “They would not do that”, replied mother, “for they have not demanded its surrender”. Scarcely had the words passed her lips when Jane, the nurse, rushed in crying out that they were shelling. We ran to the front door just in time to hear a shell go whirring past. It fell and exploded not far off. This was so unexpected. I do not know why, but in all my list of anticipated horrors I somehow had not thought of a bombardment. If I had only looked for it I wouldn’t have been so frightened. As it was for a few minutes I leaned against the door fairly shivering, partly with cold but chiefly from nervous excitement. After listening to them awhile this wore off and I became accustomed to the shells. Indeed we were in no immediate danger, for the shells were thrown principally higher up. They were shelling the town from the Lexington heights just over the river, and from the campus gate their troops could be seen drawn up on the hill-tops. Up the street this morning the Government stores were thrown open to the people and there was a general scramble. Our negroes were up there until frightened home by the shells. The shelling was discontinued for an hour or two and then renewed with so much fury that we unanimously resolved to adjourn to the basement and abandon the upper rooms. Sallie and I went up to our rooms to bring down our things. I was standing at my bureau with my arms full when I heard a loud report.

The shell whistled right over my head and exploded. I stood breathless, really expecting to see it fall in the room. When it had passed I went into the hall and met Sallie, coming from her room, pale and trembling . “O Emma” she said, “this is dreadful!”

We went downstairs – mother stood in the hall looking very much frightened – “Did you hear -” “Yes indeed” – and at that instant another whistled close overhead. This was growing rather unpleasant and we retreated to the basement without farther delay, where we sat listening as they fell now nearer, and now farther off. Sallie suffered most – she would not be left alone, and would not allow me to go to the outer door to look about, but would call me back in terror. The firing ceased about dinner time, but as may be imagined, none of us could eat. During the afternoon a rapid cannonade was kept up and I do not think the forces could have been more than half a mile from here. Dr. Thomson says they are only skirmishing. Davis says we have received re-inforcements, but he thinks we cannot hold the town as we have given up the strongest position. He was here this morning during the shelling and stood talking to me in the dining room for some time, giving me a picture of the confusion up town. Our soldiers had opened and plundered some of the stores. He brought me a present of a box of fancy feathers and one or two other little things he had picked up. He says the bridge will be burned and the town evacuated tonight.

10 o’clock p.m. – They are in bed sleeping, or trying to sleep. I don’t think I shall attempt it. Davis was here just now to tell us the news – it is kind of him to come so often to keep us posted. I went up to see him – made Henry light the gas and sat talking to him in the hall, while through the open door came the shouts of the soldiery drawn up along the streets ready to march out. Perhaps the Yankees may be in tonight – yet I do not feel as frightened as I thought I would. Dr. Thomson re-assures us. He does not think we shall suffer half as much as we imagine. Maggie is not coming. We three will have to tough it out alone. We have moved into the back basement room. I opened the door which gives from our present sleeping room on the back yard just now, and the atmosphere was stifling with gun-powder smoke. After I left Davis and came downstairs awhile ago the gas went out, so I am writing now by the firelight. I suppose it will be several days before we see gas again. Fortunately mother has a few candles. Henry had to cut down a tree on the yard today for fuel. But I must put by my pencil for tonight. I wonder what another day’s entry will be!