18 February 1865: “Strange as it may seem we were actually idiotic enough to believe Sherman would keep his word! – A Yankee – and Sherman!”

Posted on 18 Feb ’15 by Rebecca Williams

Item Description: Entry, dated 18 February 1865, from the diary of Emma Florence LeConte, the daughter of scientist Joseph LeConte of Columbia, S.C. She writes in great detail about the destruction of Columbia after Sherman’s Army has overtaken the city. 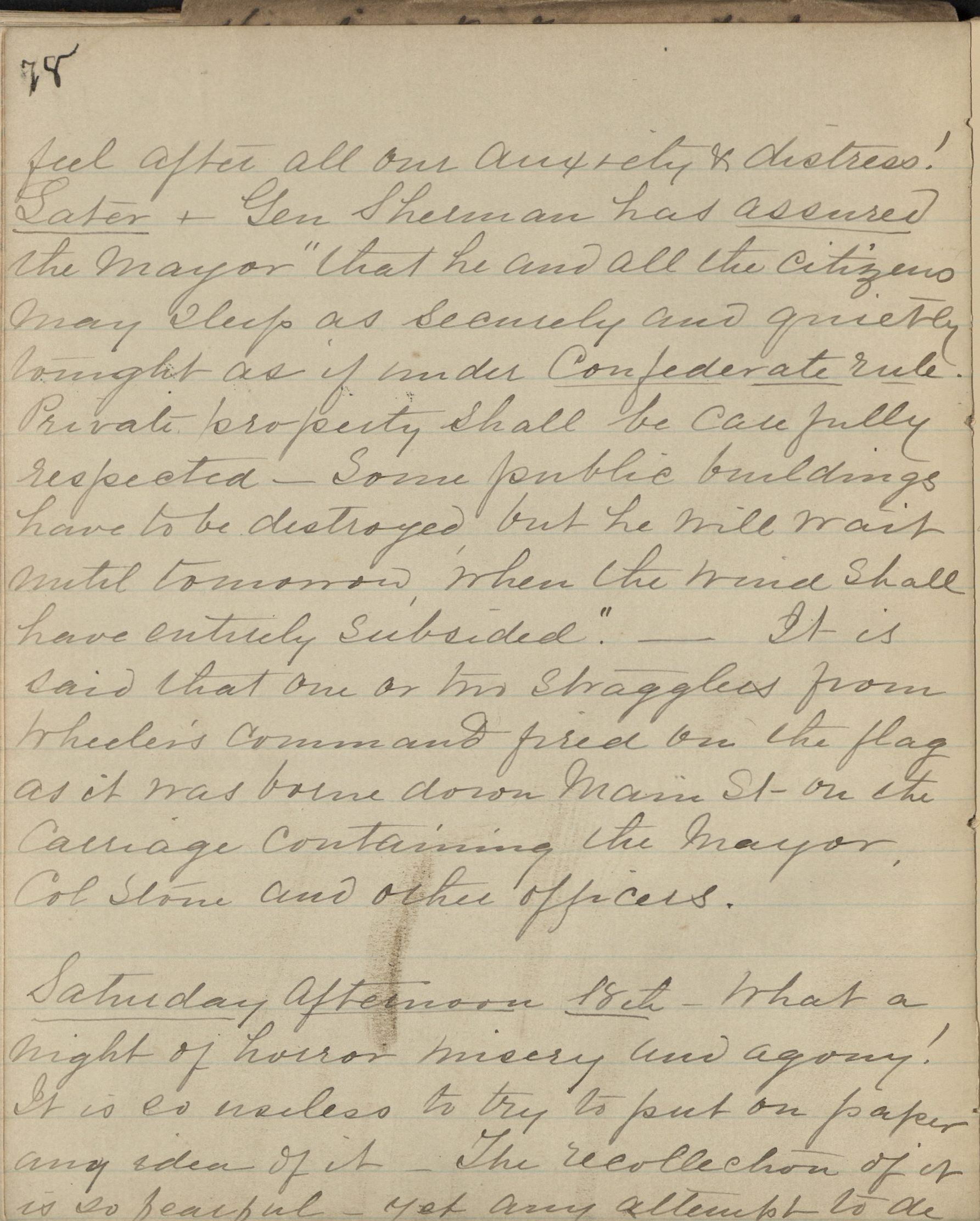 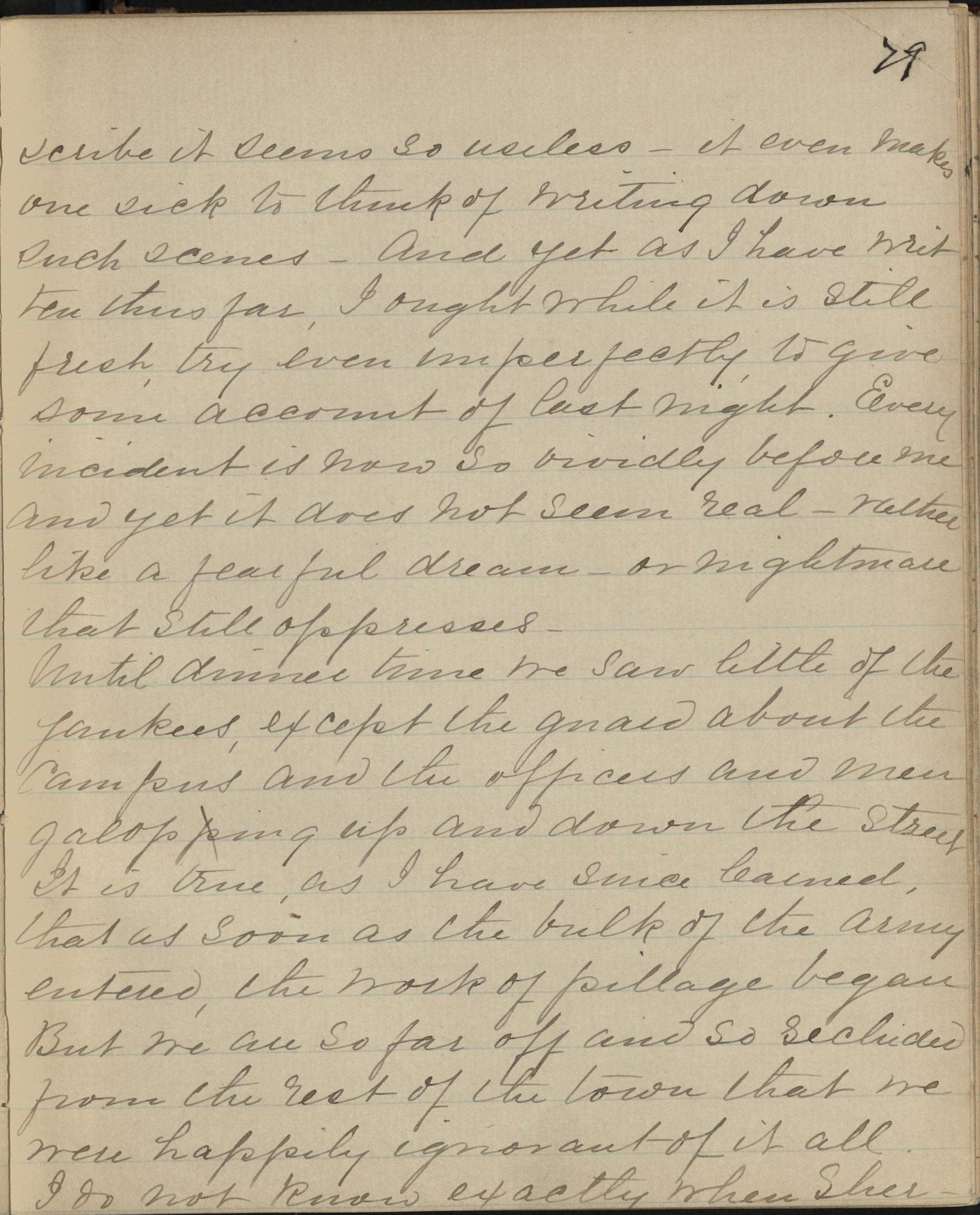 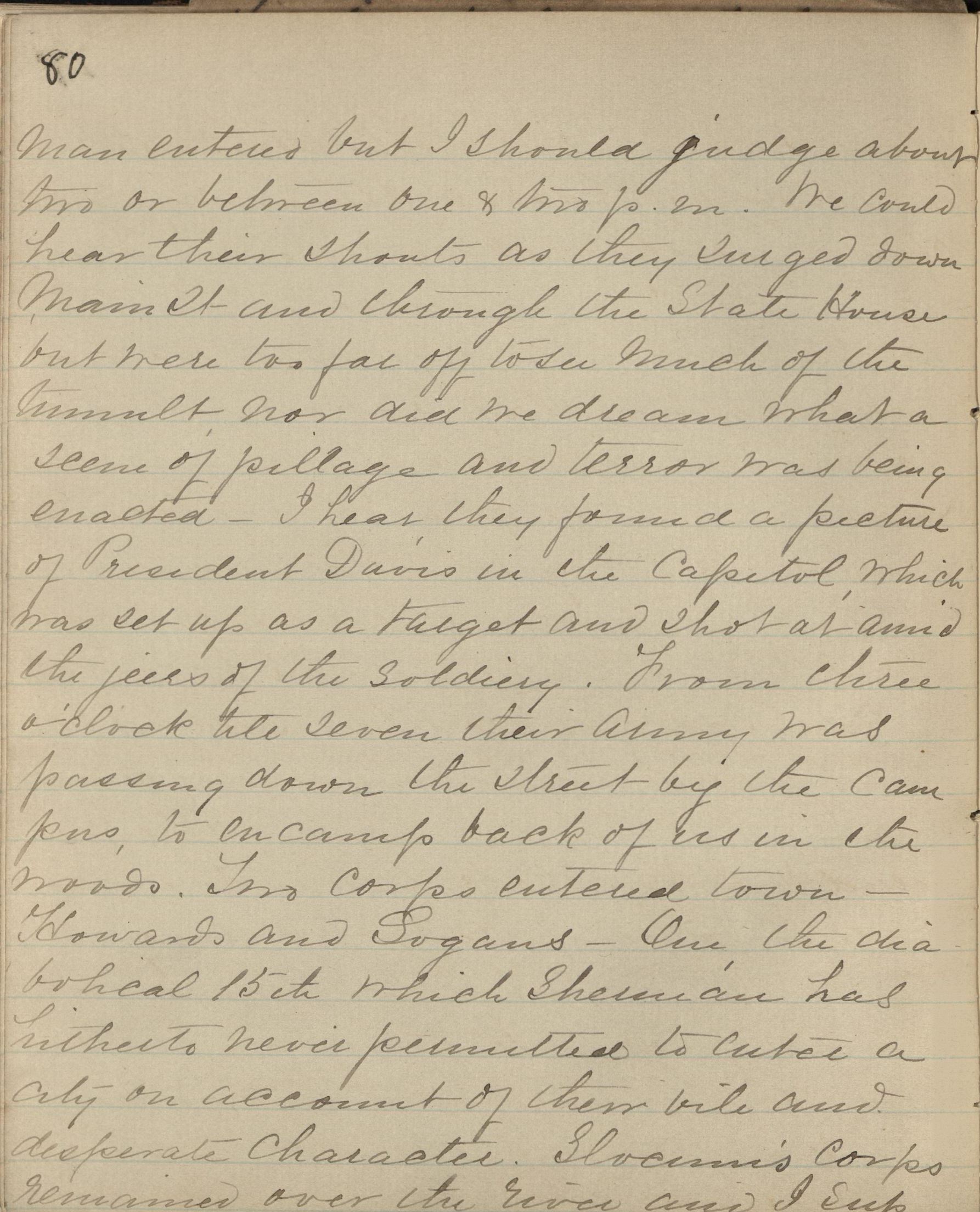 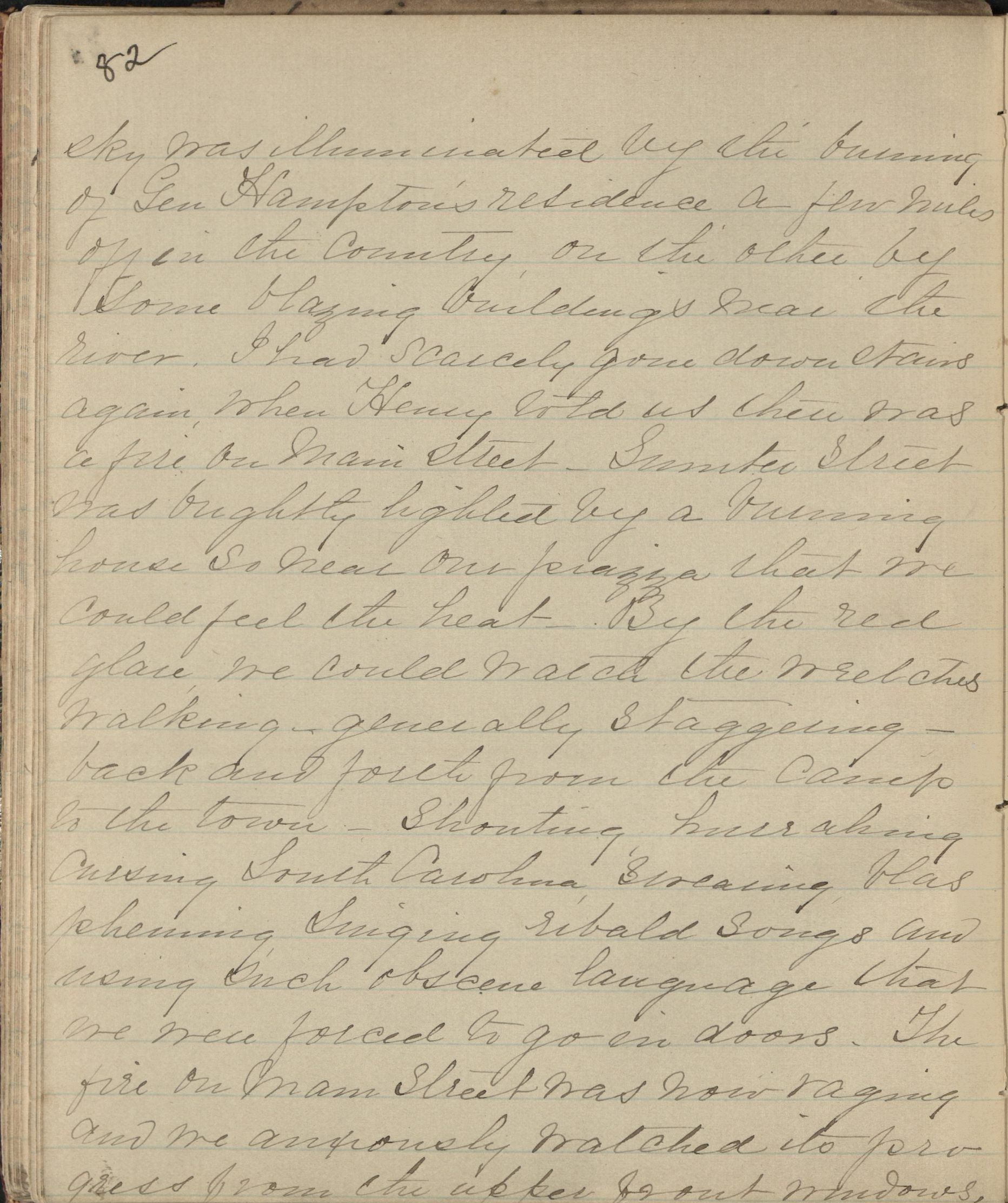 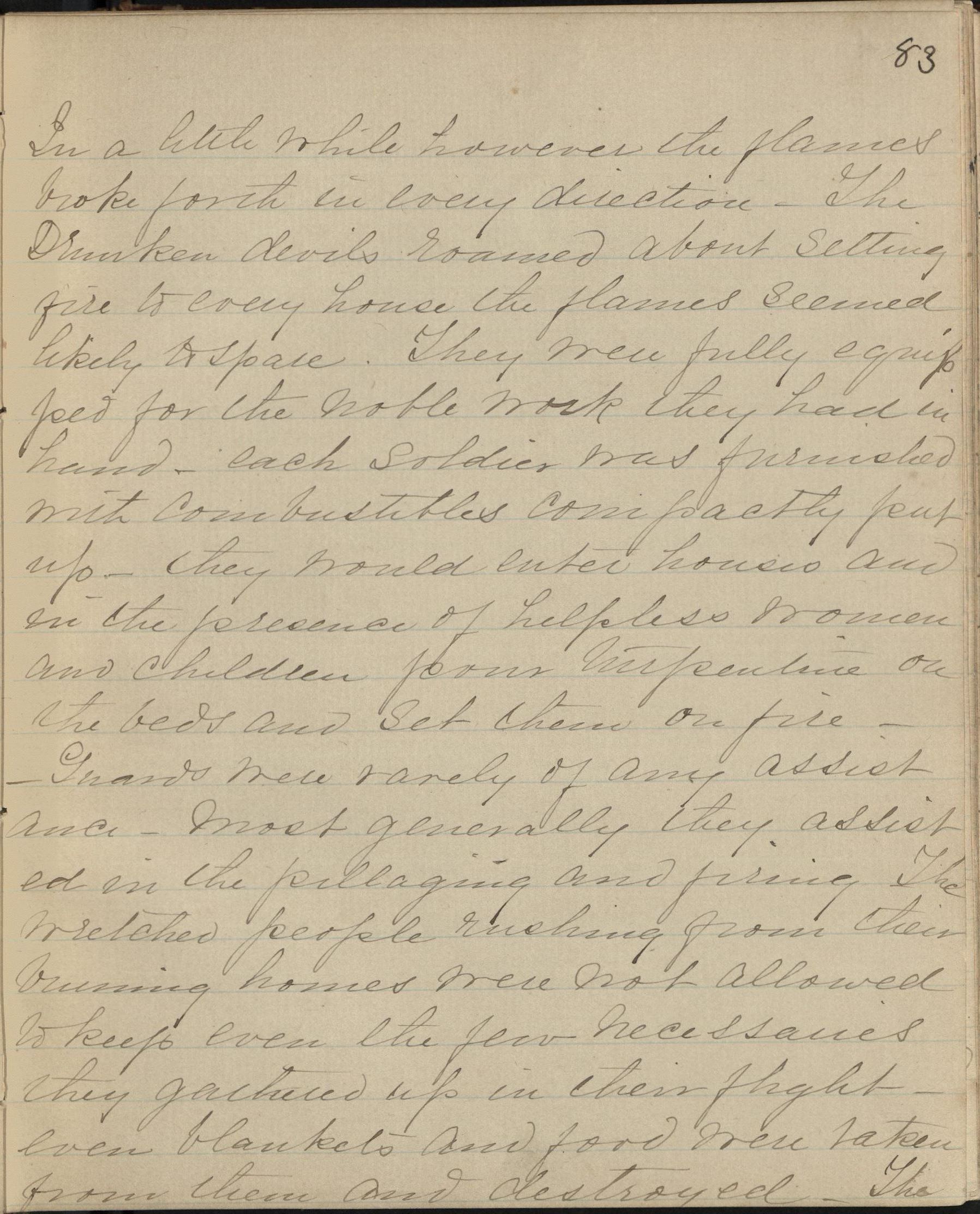 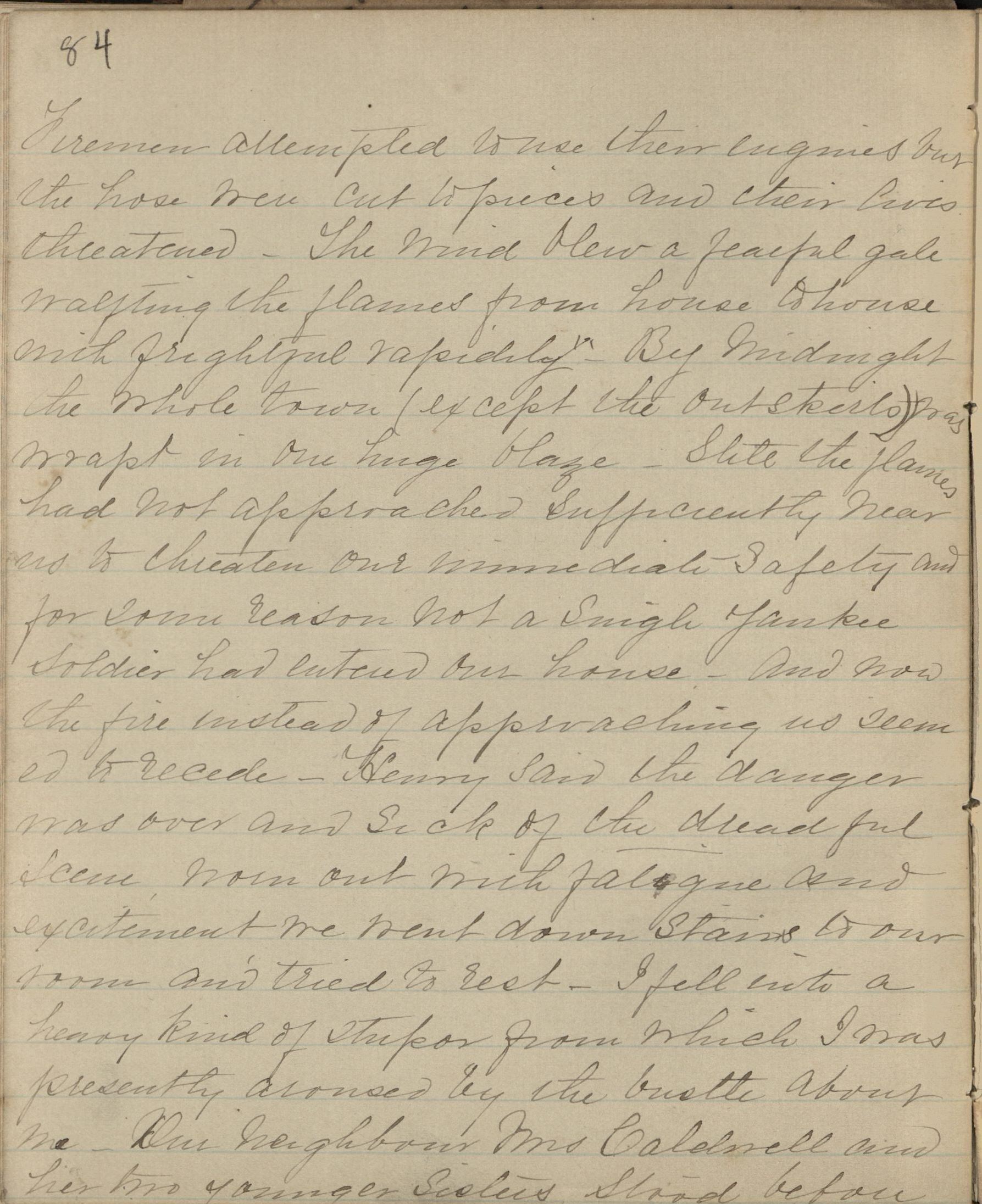 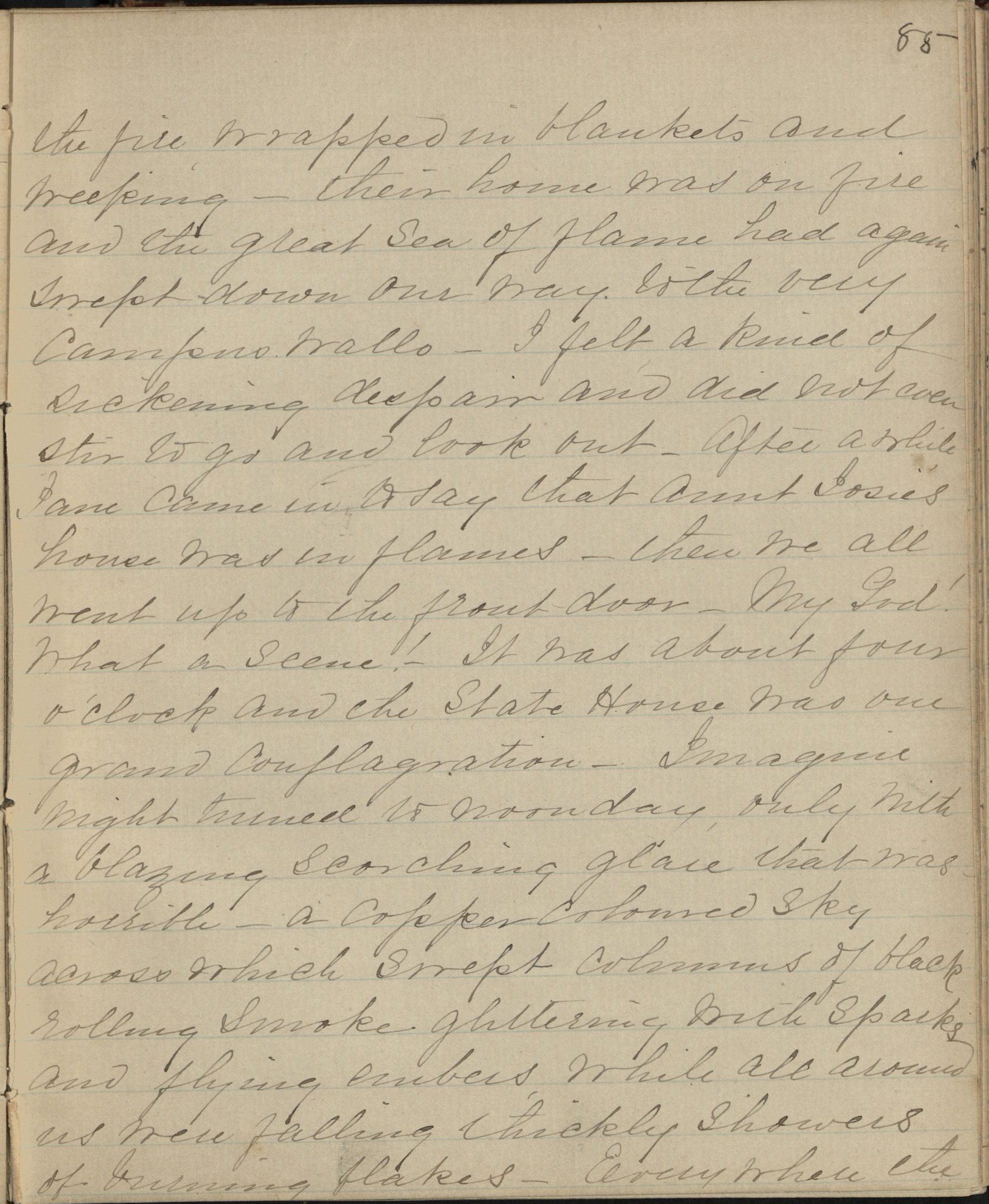 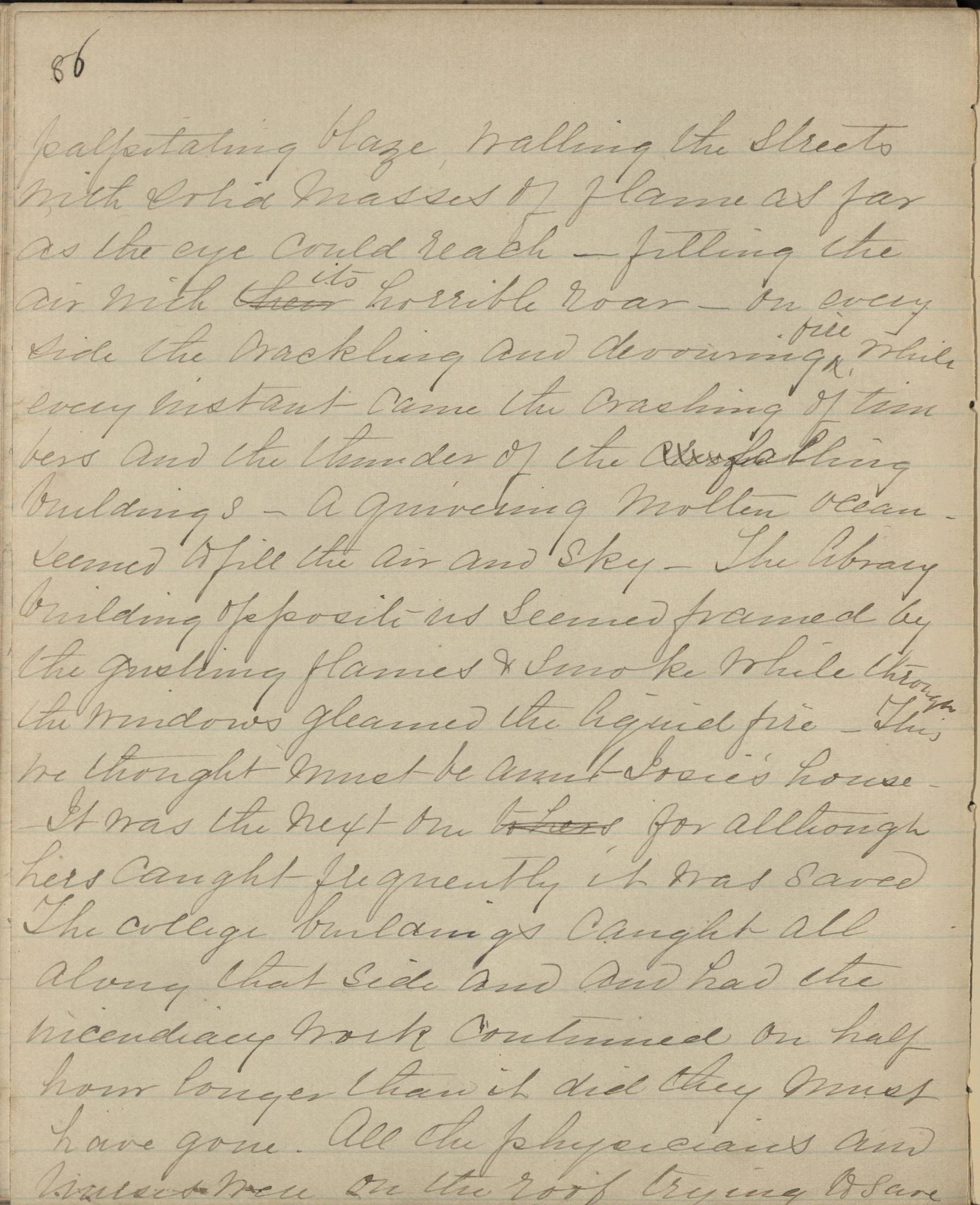 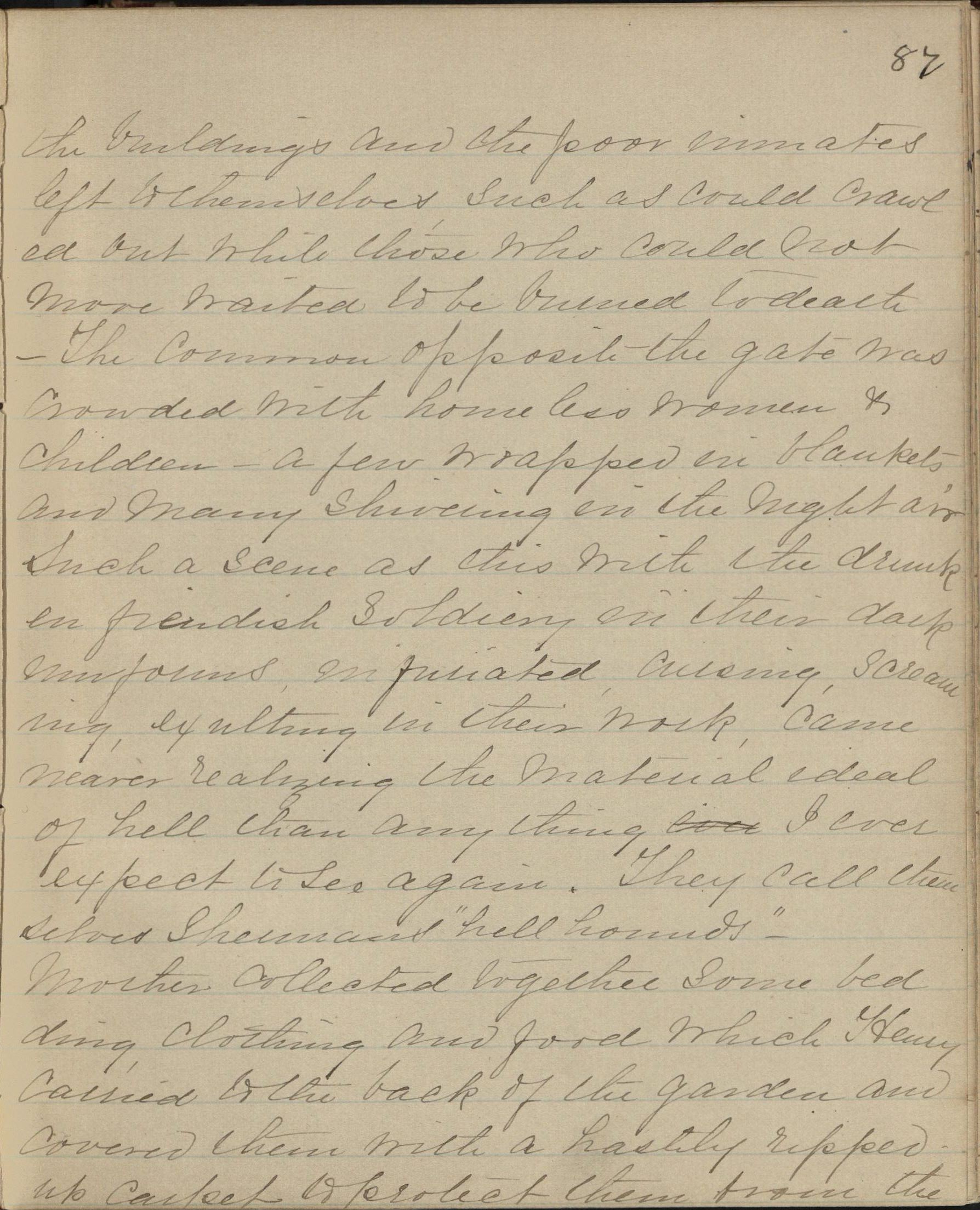 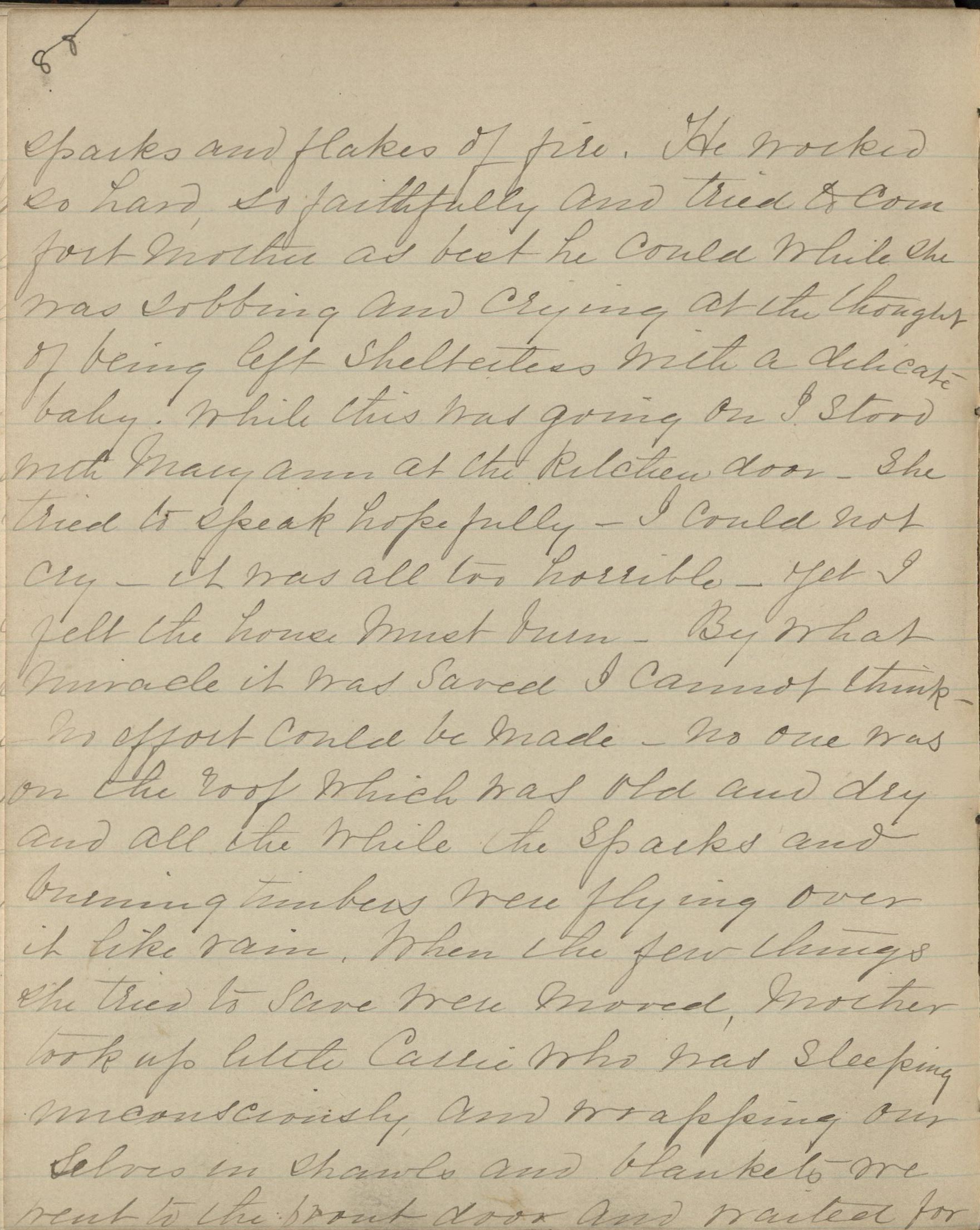 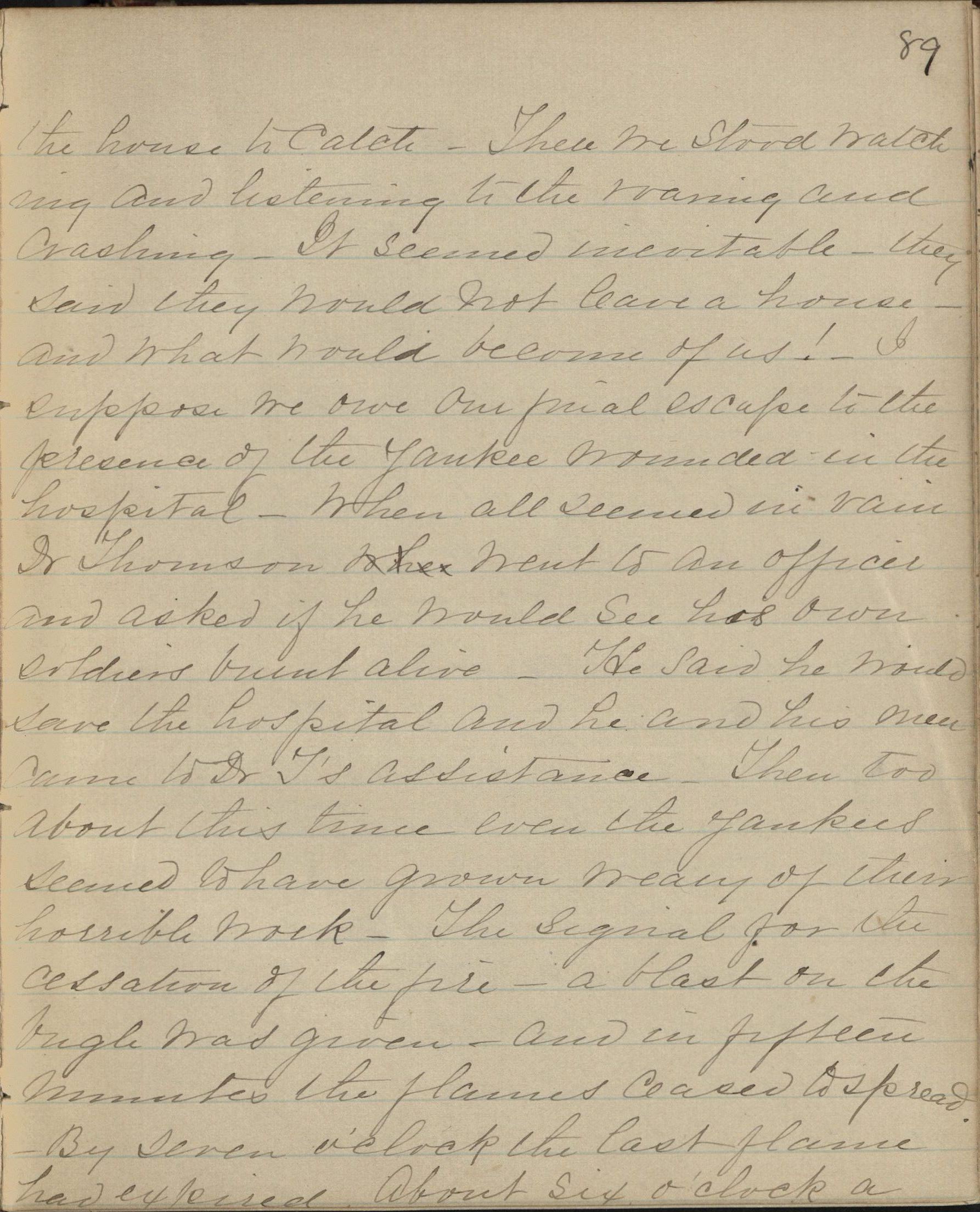 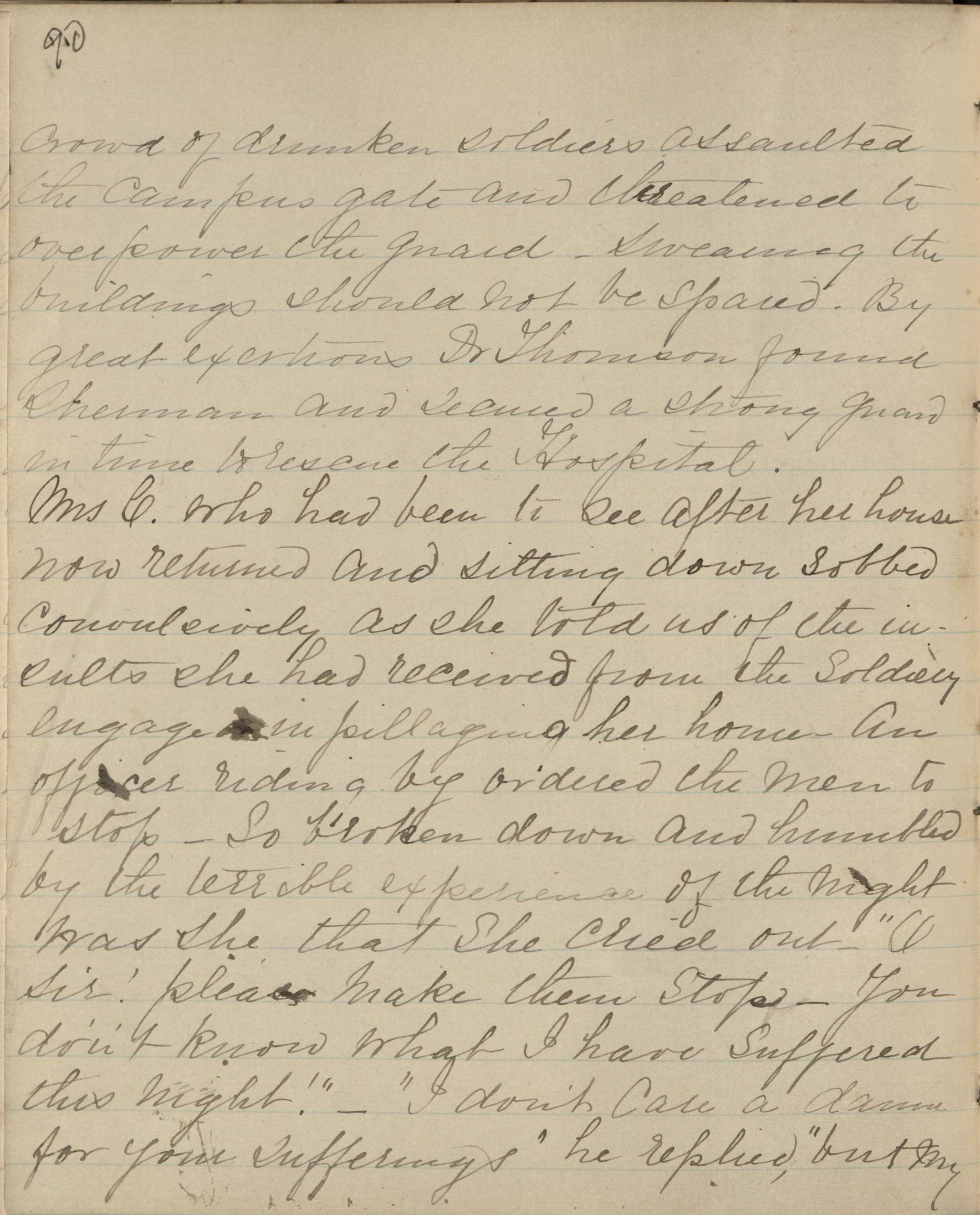 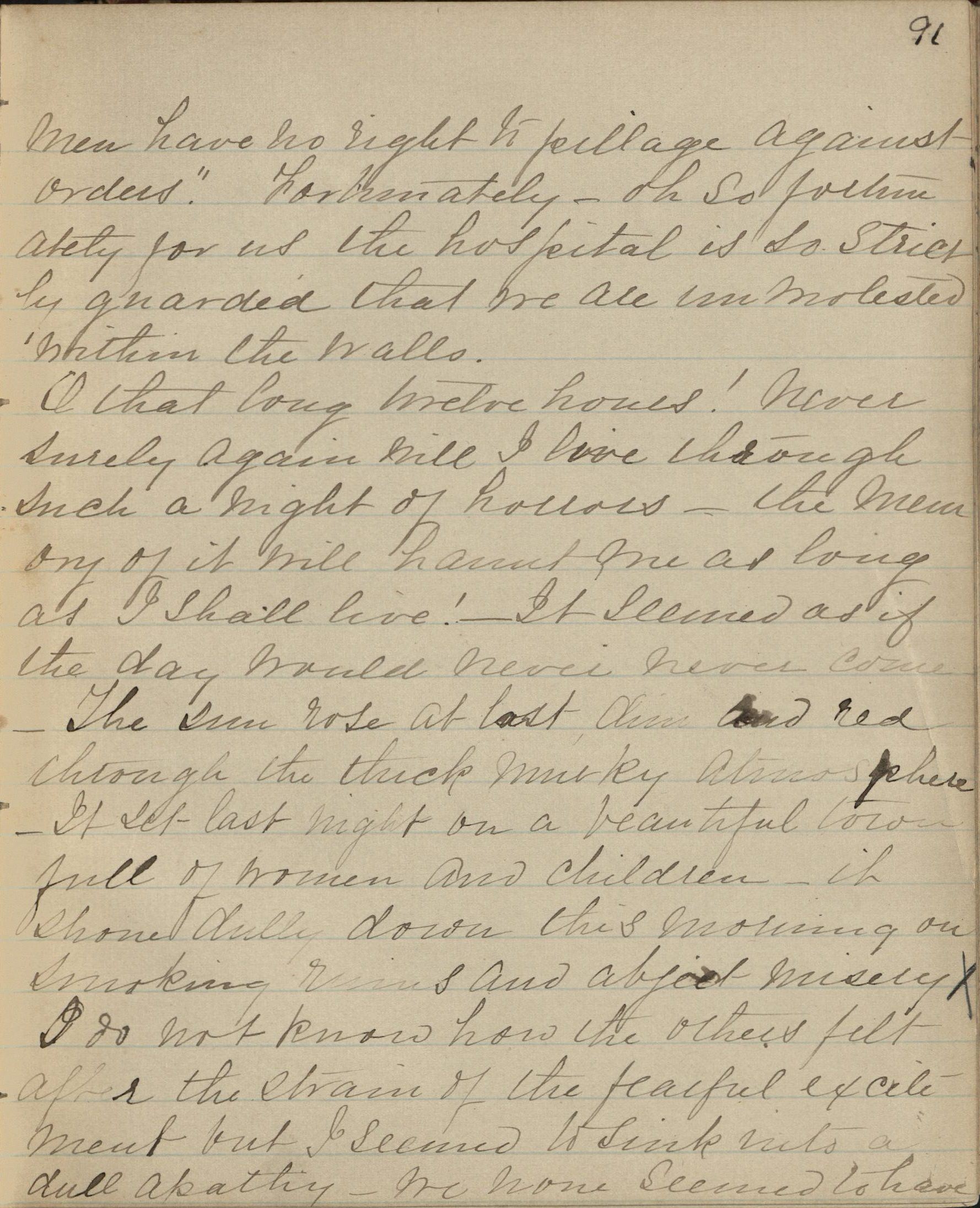 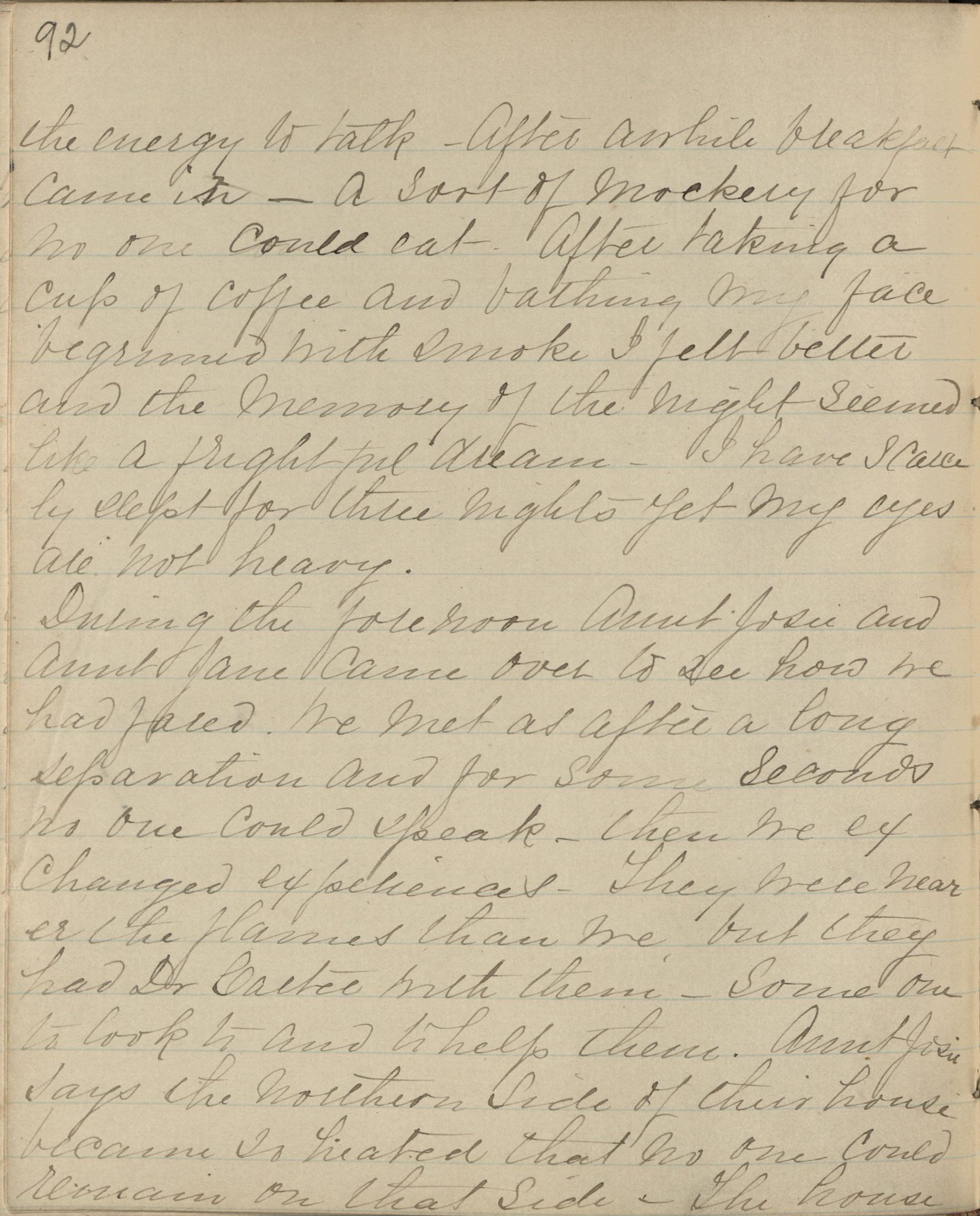 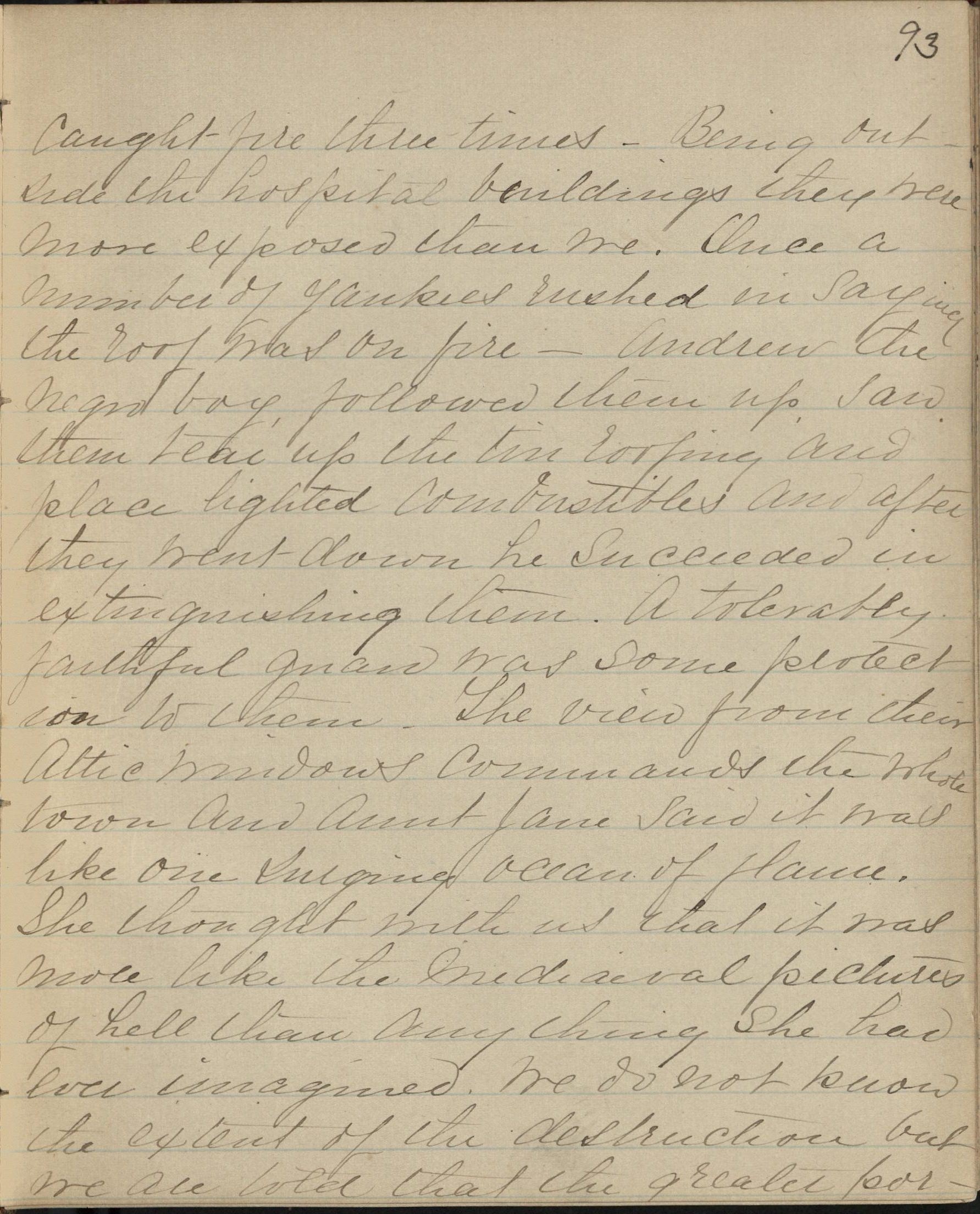 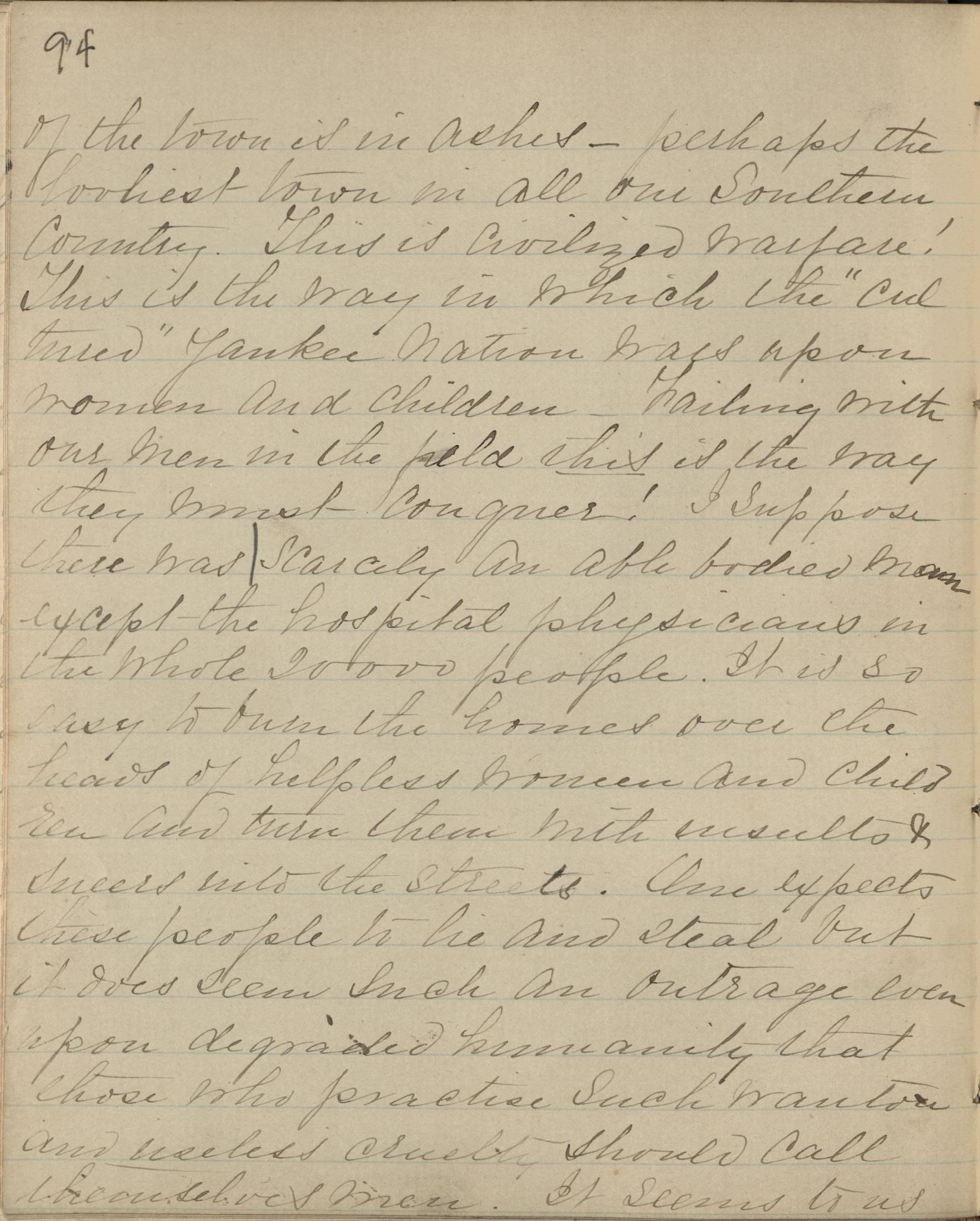 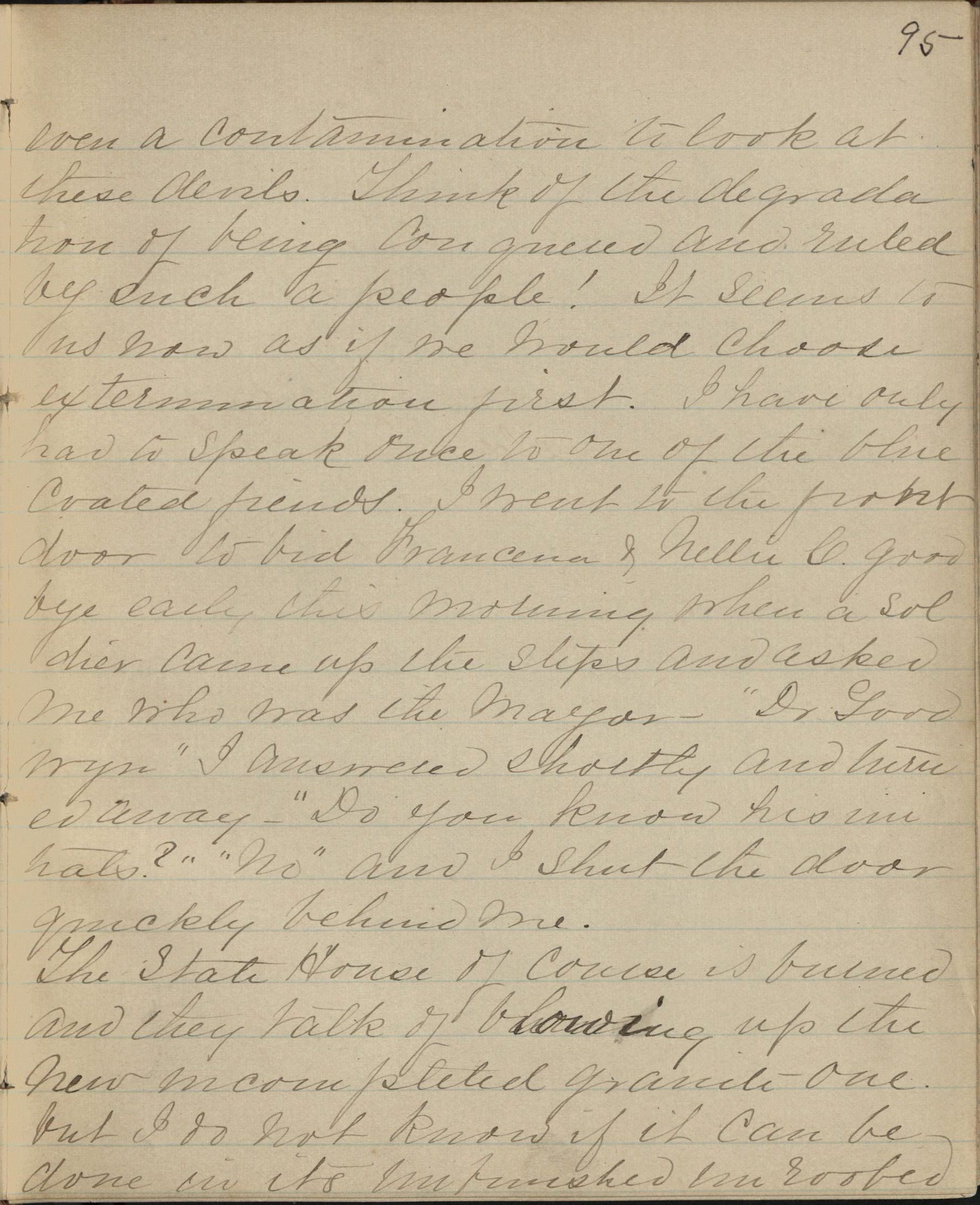 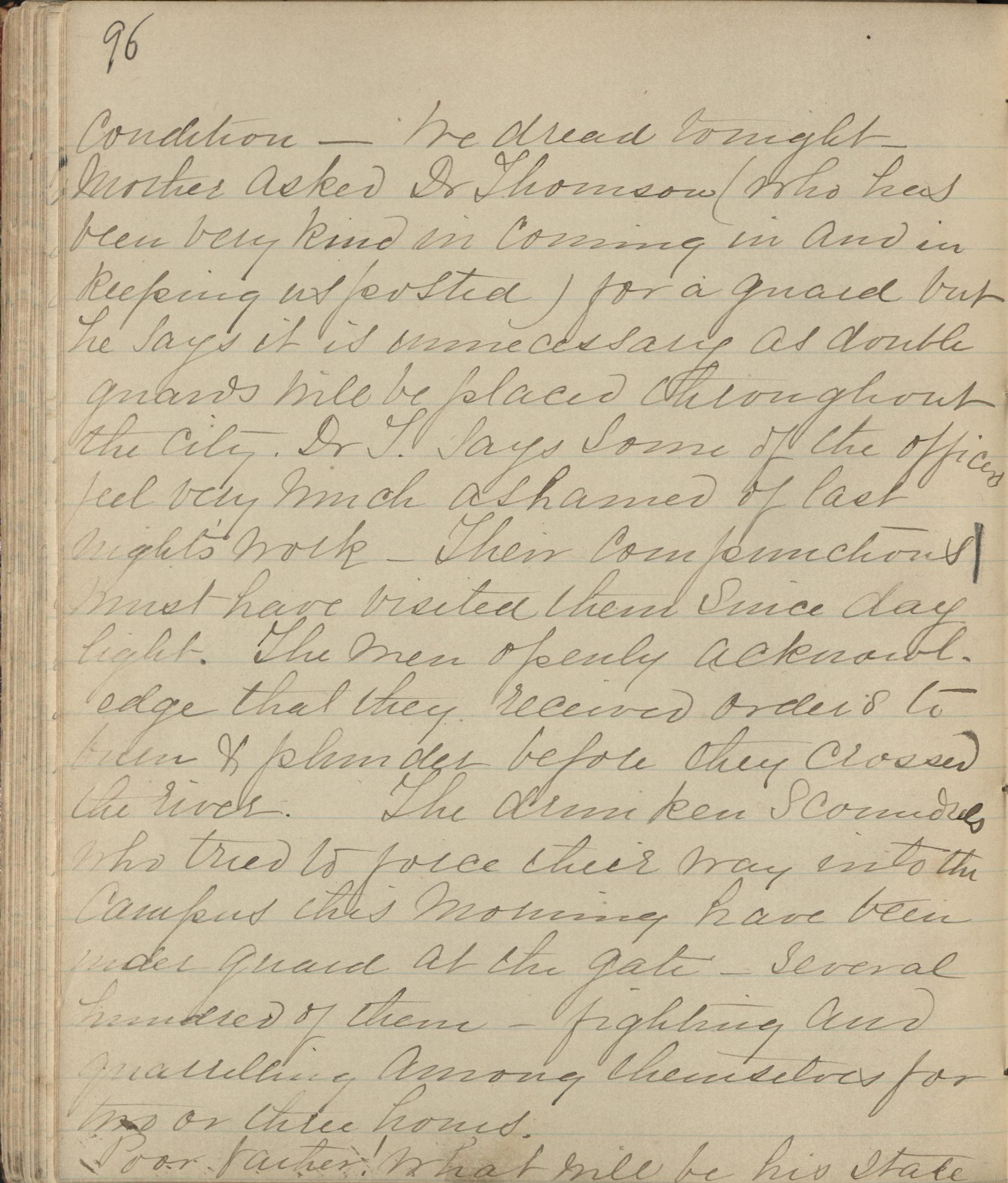 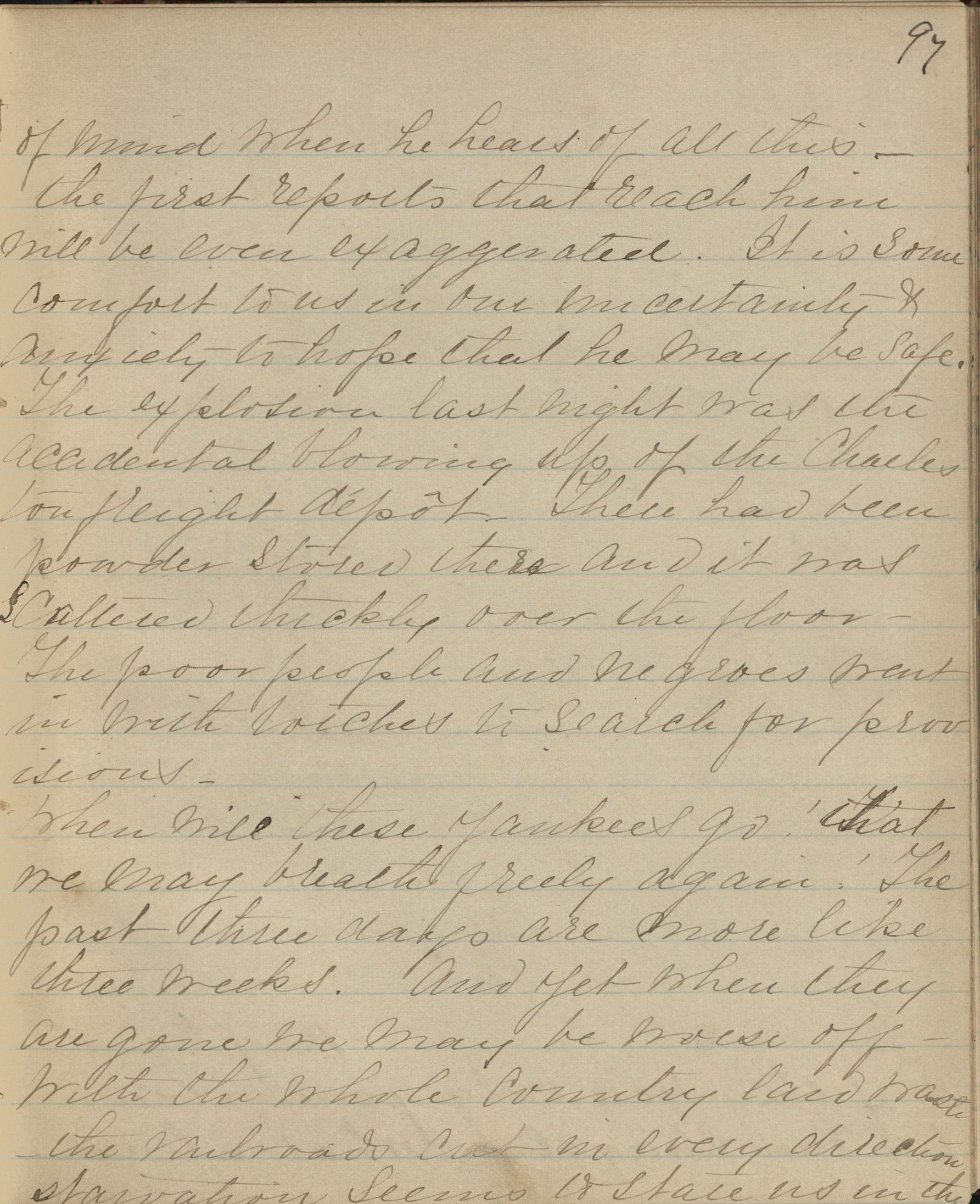 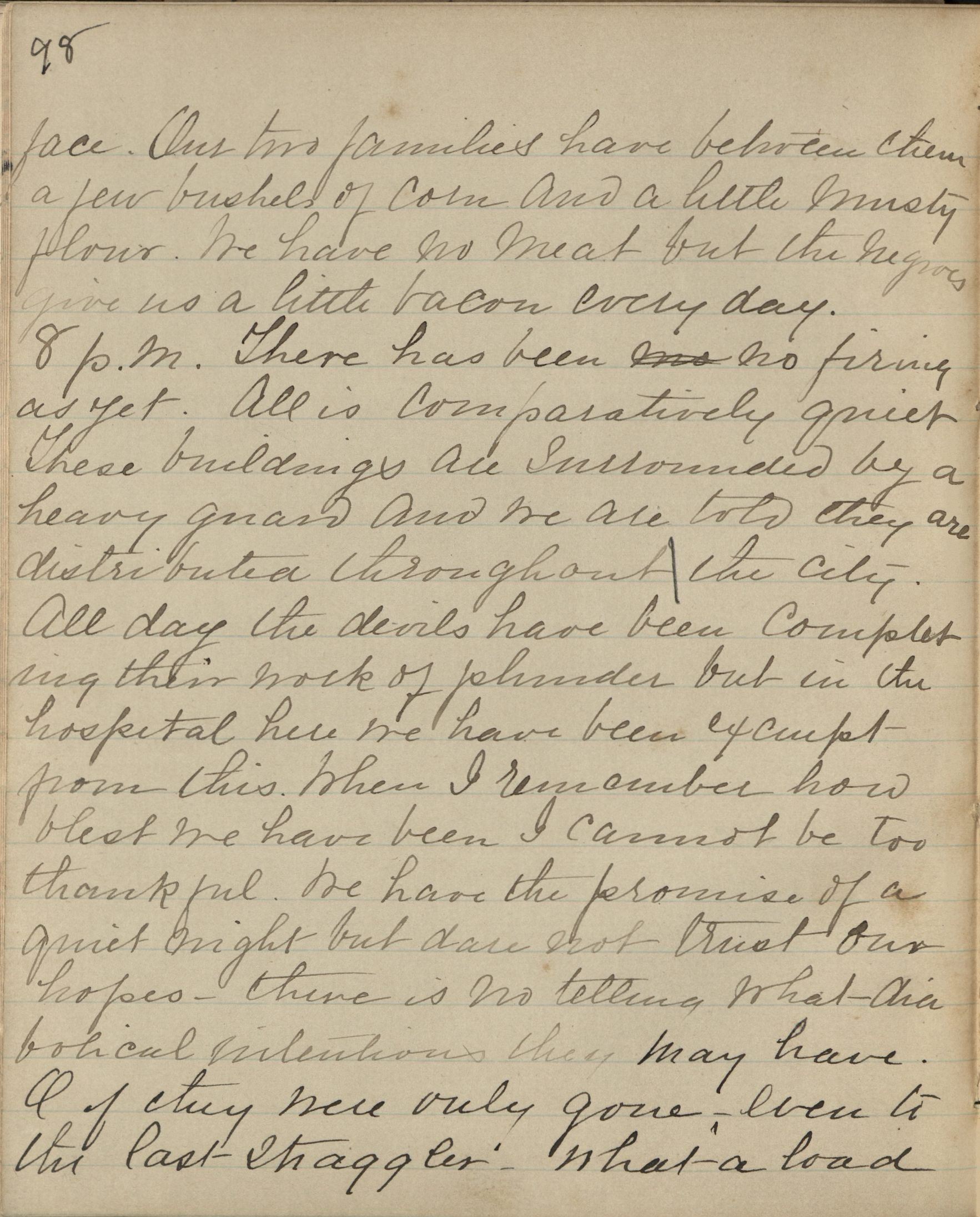 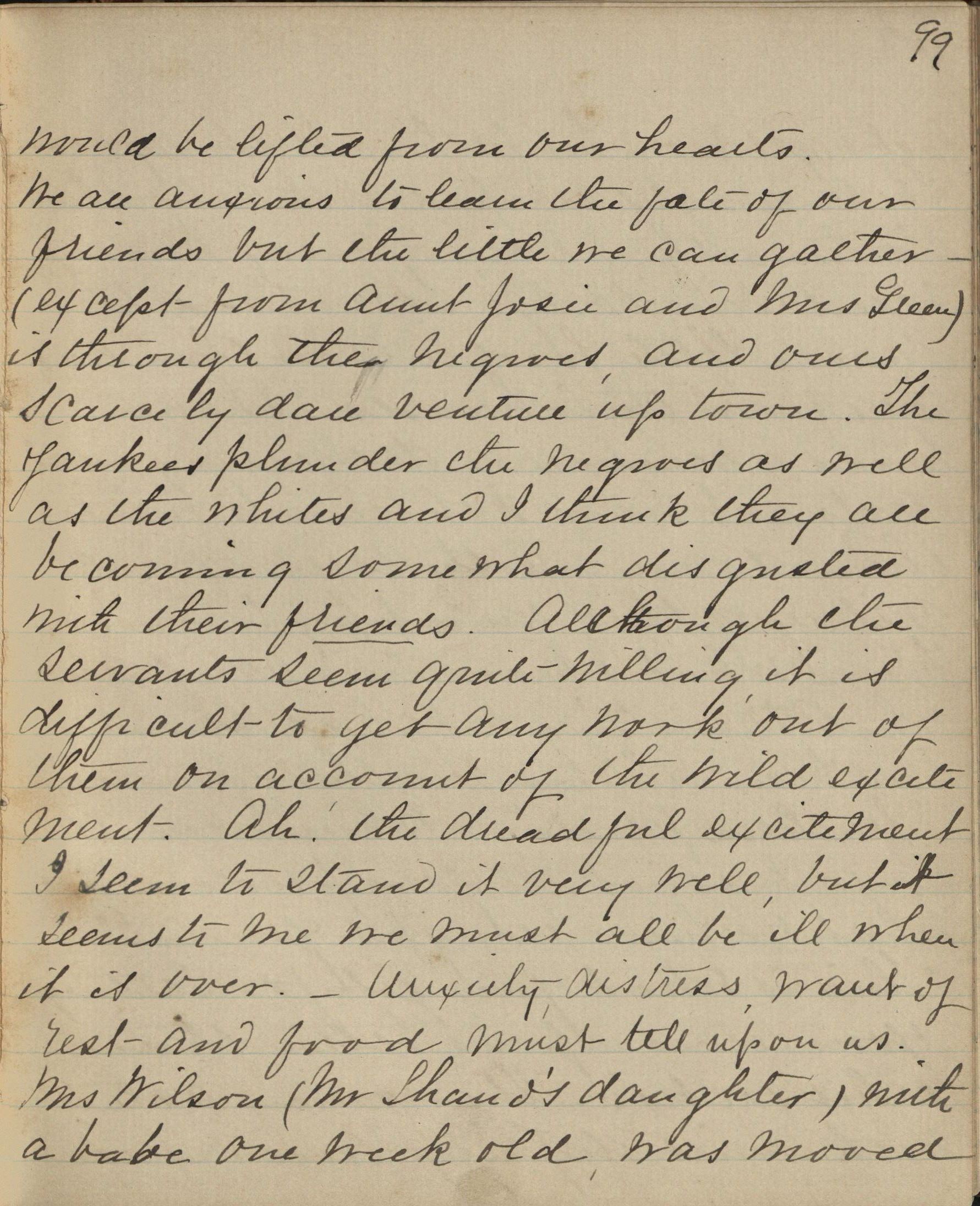 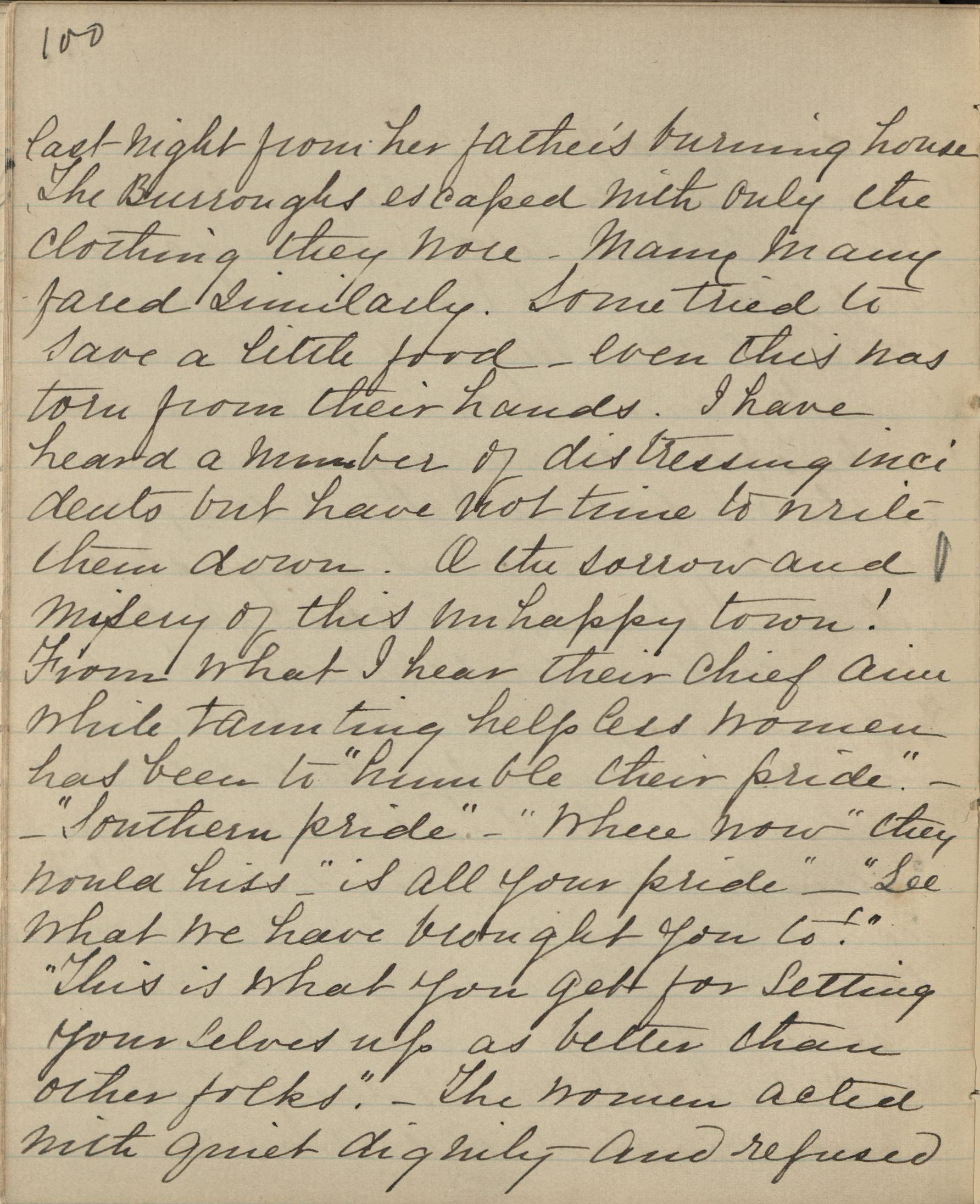 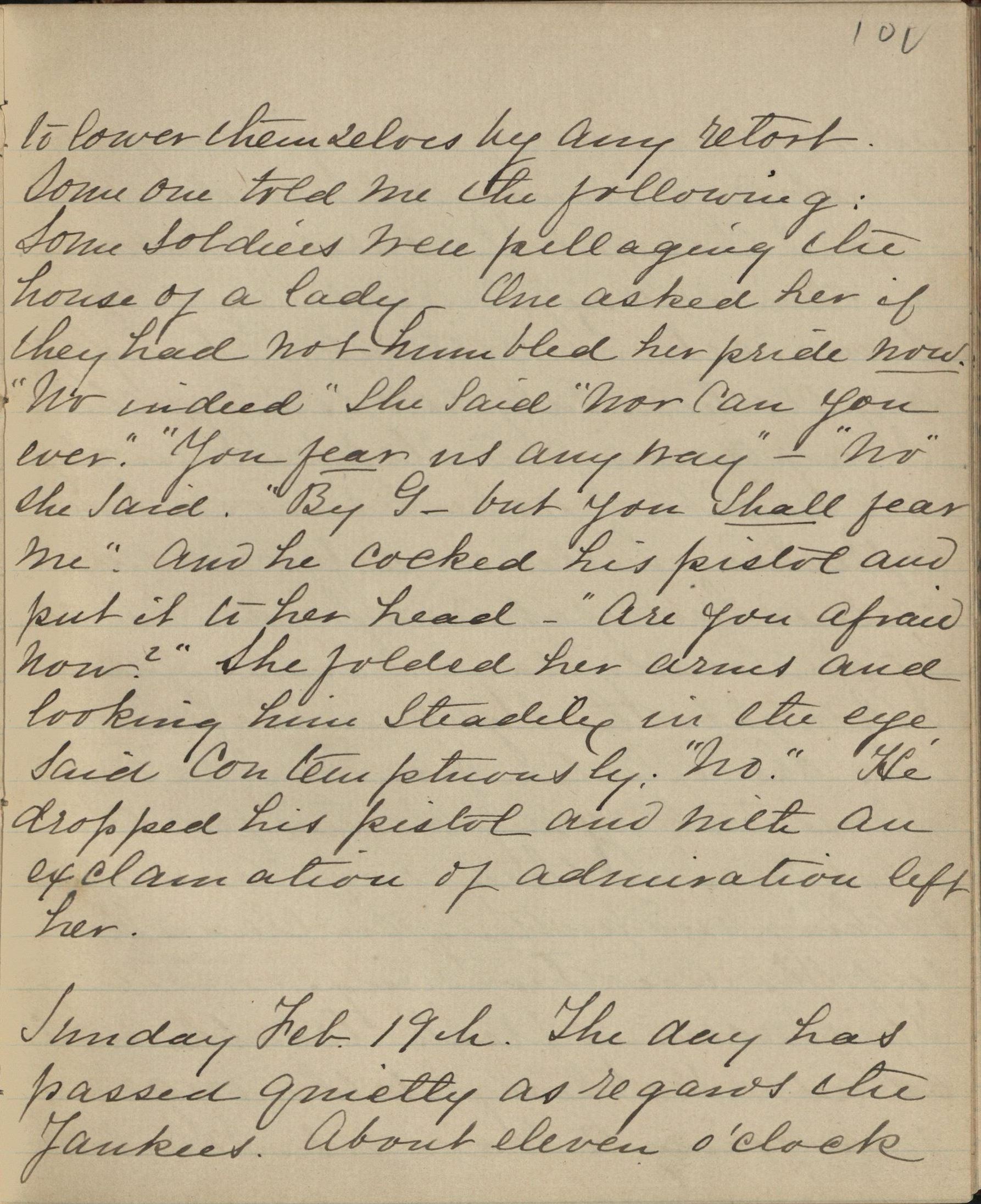 Saturday afternoon, Feb. 18th.
– What a night of horror, misery and agony! It is useless to try to put on paper any idea of it. The recollection is so fearful, yet any attempt to describe it seems so useless. It even makes one sick to think of writing down such scenes – and yet as I have written thus far I ought, while it is still fresh, try even imperfectly to give some account of last night. Every incident is now so vividly before me and yet it does not seem real – rather like a fearful dream, or nightmare that still oppresses.

Fortunately – oh, so fortunately for us, the hospital is so strictly guarded that we are unmolested within the walls.

O, that long twelve hours! Never surely again will I live through such a night of horrors. The memory of it will haunt me as long as I shall live – it seemed as if the day would never come. The sun rose at last, dim and red through the thick murky atmosphere. It set last night on a beautiful town full of women and children – it shone dully down this morning on smoking ruins and abject misery.

I do not know how the others felt after the strain of the fearful excitement , but I seemed to sink into a dull apathy. We none seemed to have the energy to talk. After awhile breakfast came – a sort of mockery, for no one could eat. After taking a cup of coffee and bathing my face, begrimed with smoke, I felt better and the memory of the night seemed like a frightful dream. I have scarcely slept for three nights, yet my eyes are not heavy.

During the forenoon Aunt Josie and Aunt Jane came over to see how we had fared. We met as after a long seperation, and for some seconds no one could speak. Then we exchanged experiences. They were nearer the flames than we, but they had Dr. Carter with them – someone to look to and to help them. Aunt Josie says the northern side of their house became so heated that no one could remain on that side of the house, and it caught fire three times. Being outside the hospital buildings they were more exposed than we. Once a number of Yankees rushed in saying the roof was on fire. Andrew, the negro boy followed them up, saw them tear up the tin roofing and place lighted combustibles, and after they went down he succeeded in extinguishing the flames. A tolerably faithful guard was some protection to them. The view from their attic windows commands the whole town, and Aunt Josie said it was like one surging ocean of flame. She thought with us that it was more like the mediaeval pictures of hell than anything she had ever imagined. We do not know the extent of the destruction, but we are told that the greater portion of the town is in ashes. – Perhaps the loveliest town in all our Southern country. This is civilized warfare! This is the way in which the “cultured” Yankee nation wars upon women and children! Failing with our men in the field, this is the way they must conquer! I suppose there was scarcely an able-bodied man, except the hospital physicians, – in the whole twenty thousand people.

It is so easy to burn the homes over the heads of the helpless women and children, and turn them with insults and sneers into the streets. One expects these people to lie and steal, but it does seem such an outrage even upon degraded humanity that those who practise such wanton and useless cruelty should call themselves men. It seems to us even a contamination to look at these devils. Think of the degradation of being conquered and ruled by such a people! It seems to me now as if we would choose extermination. I have only had to speak once to one of the blue-coated fiends. I went to the front door to bid Francena and Nellie C. goodbye early this morning, when a soldier came up the steps and asked me who was the Mayor. “Dr. Goodwyn”, I answered shortly and turned away. “Do you know his initials?” – “No”, and I shut the door quickly behind me.

The State house of course is burned, and they talk of blowing up the new uncompleted granite one, but I do not know if it can be done in its unfinished unroofed condition. We dread tonight. Mother asked Dr. Thomson (who has been very kind about coming in and in keeping us posted) for a guard, but he says it is unnecessary as double guards will be placed throughout the city. Dr. T. says some of the officers feel very much ashamed of last night’s work. Their compunctions must have visited them since daylight. The men openly acknowledged that they received orders to burn and plunder before they crossed the river. The drunken scoundrels who tried to force their way into the Campus this morning have been under guard at the gate – several hundred of them – fighting and quarrelling among themselves, for sever hours. Poor father! What will be his state of mind when he hears of all this. The first reports that reach him will be even exaggerated. It is some comfort to us in our uncertainty and anxiety to hope that he may be safe. The explosion last night was accidental blowing up of the Charleston freight depot. There had been powder stored there and it was scattered thickly over the floor. The poor people and negroes went in with torches to search for provisions – When will these Yankees go that we may breathe freely again! The past three days are more like three weeks. And yet when they are gone we may be worse off with the whole country laid waste and the railroads out in every direction. Starvation seems to stare us in the face. Our two families have between them a few bushels of corn and a little musty flour. We have no meat, but the negroes give us a little bacon every day.

8 p.m. – There has been no firing as yet. All is comparatively quiet. These buildings are surrounded by a heavy guard, and we are told they are distributed throughout the city. All day the devils have been completing their work of plunder, but in the hospital here we have been exempt from this. When I remember how blest we have been I cannot be too thankful. We have the promise of a quiet night but I dare not trust our hopes – there is no telling what diabolical intentions they may have. O if they were only gone! – even to the last straggler! What a load would be lifted from our hearts. We are anxious to learn the fate of our friends, but the little we can gather (except from Aunt Josie and Mrs. Green) is through the negroes, and ours scarcely dare venture uptown. The Yankees plunder the negroes as well as the whites, and I think they are becoming somewhat disgusted with their friends. Although the servants seem quite willing, it is difficult to get any work out of them on account of the wild excitement. Ah, the dreadful excitement – I seem to stand it very well, but it seems to me we must all be ill when it is over. Anxiety, distress, want of rest and food must tell upon us. Mrs. Wilson (Mr. Shand’s daughter) with a babe one week old was moved last night from her father’s burning house. The Burroughs escaped with only the clothing they wore. Many, many fared similarly. Some tried to save a little food – even this was torn from their hands. I have heard a number of distressing incidents but have not time to write them down. O, the sorrow and misery of this unhappy town! From what I can hear their chief aim, while taunting helpless women, has been to “humble their pride” – “Southern pride”. “Where now”, they would say “is all your pride – see what we have brought you to” – “This is what you get for setting yourselves up as better than other folks”. The women acted with quiet dignity and refused to lower themselves by any retort. Someone told me the following. Some soldiers were pillaging the house of a lady. One asked her if they had not humbled her pride now – “No indeed” she said, “Nor can you ever”. “You fear us anyway” – “No” she said. “By G-, but you shall fear me”, and he cocked his pistol and put it to her head – “Are you afraid now?” She folded her arms and looking him steadily in the eye said contemptuously, “no”. He dropped his pistol, and with an exclamation of admiration, left her.