21 February 1865: “There is not a house I believe in Columbia that has not been pillaged”

Posted on 21 Feb ’15 by Rebecca Williams

Item Description: Entry, dated 21 February 1865, from the diary of Emma Florence LeConte, the daughter of scientist Joseph LeConte of Columbia, S.C. She writes with anger about the destruction that has taken place in Columbia. 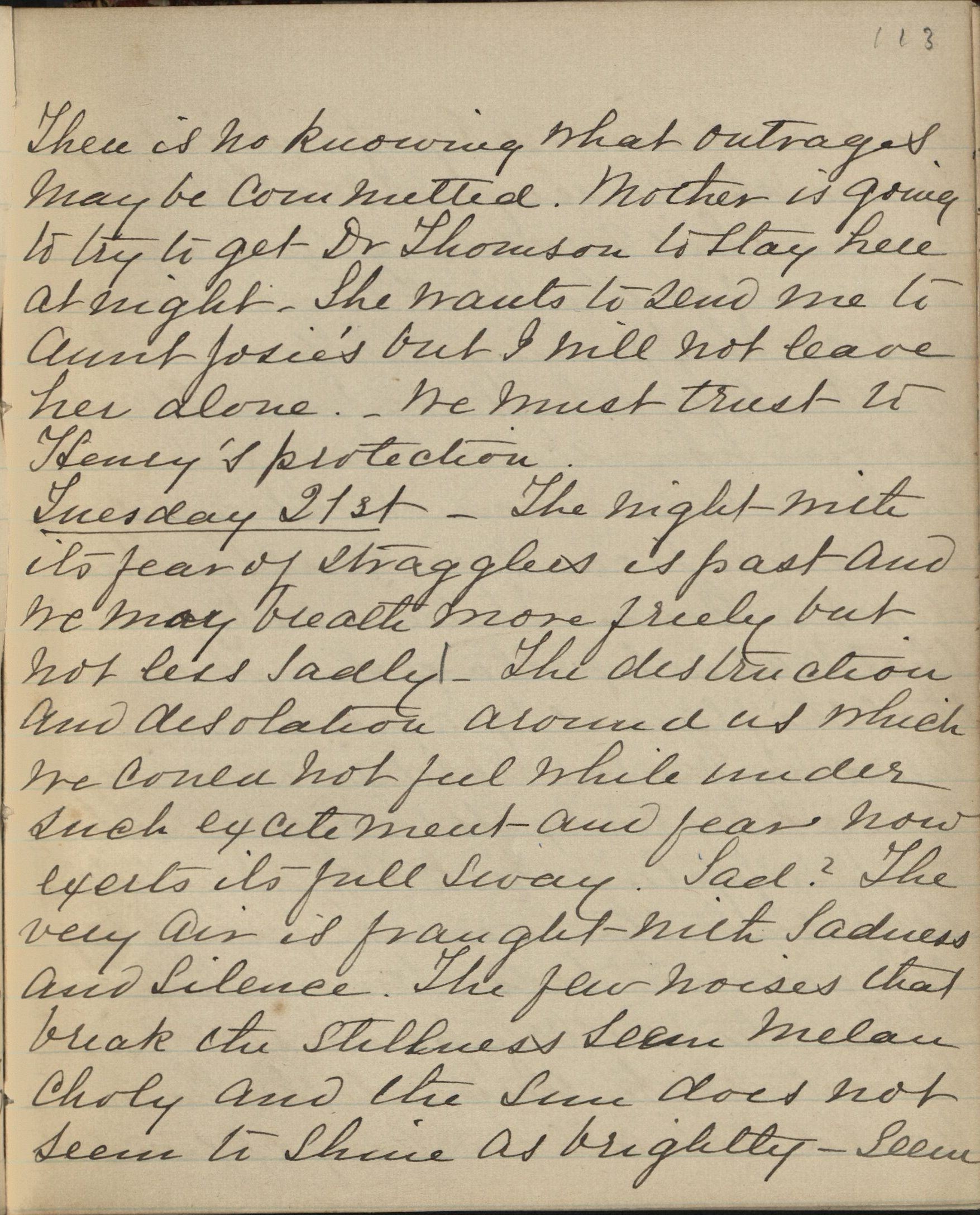 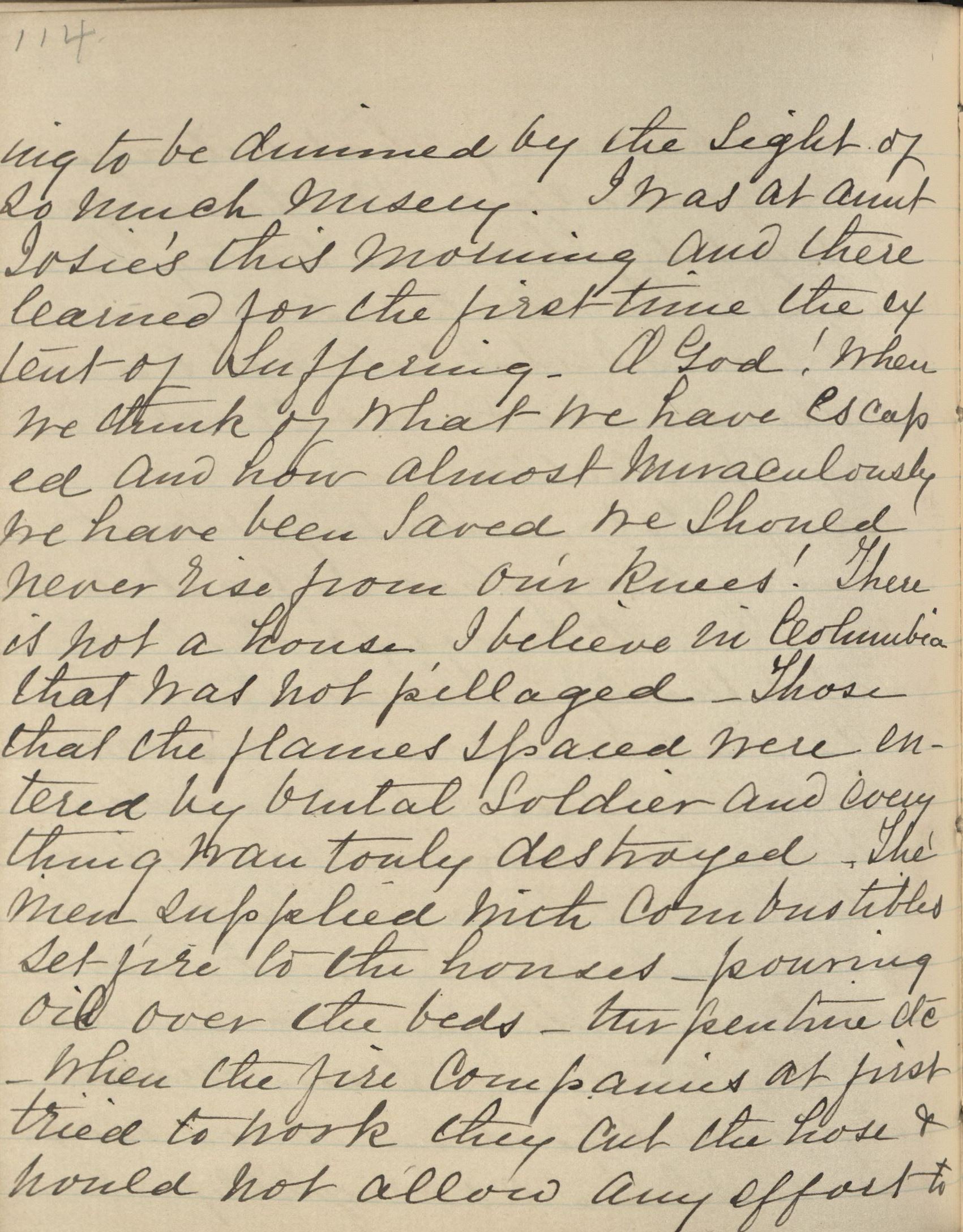 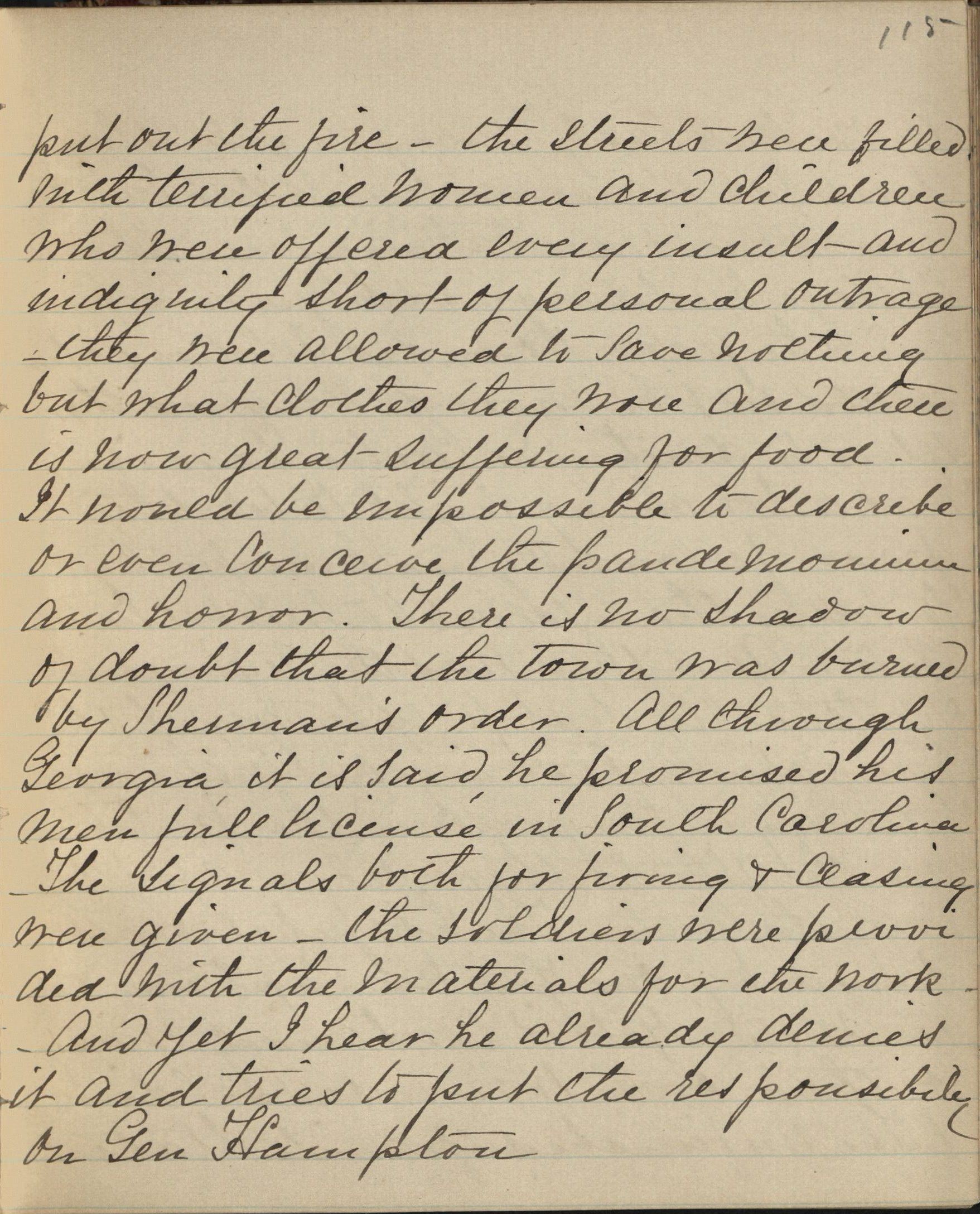 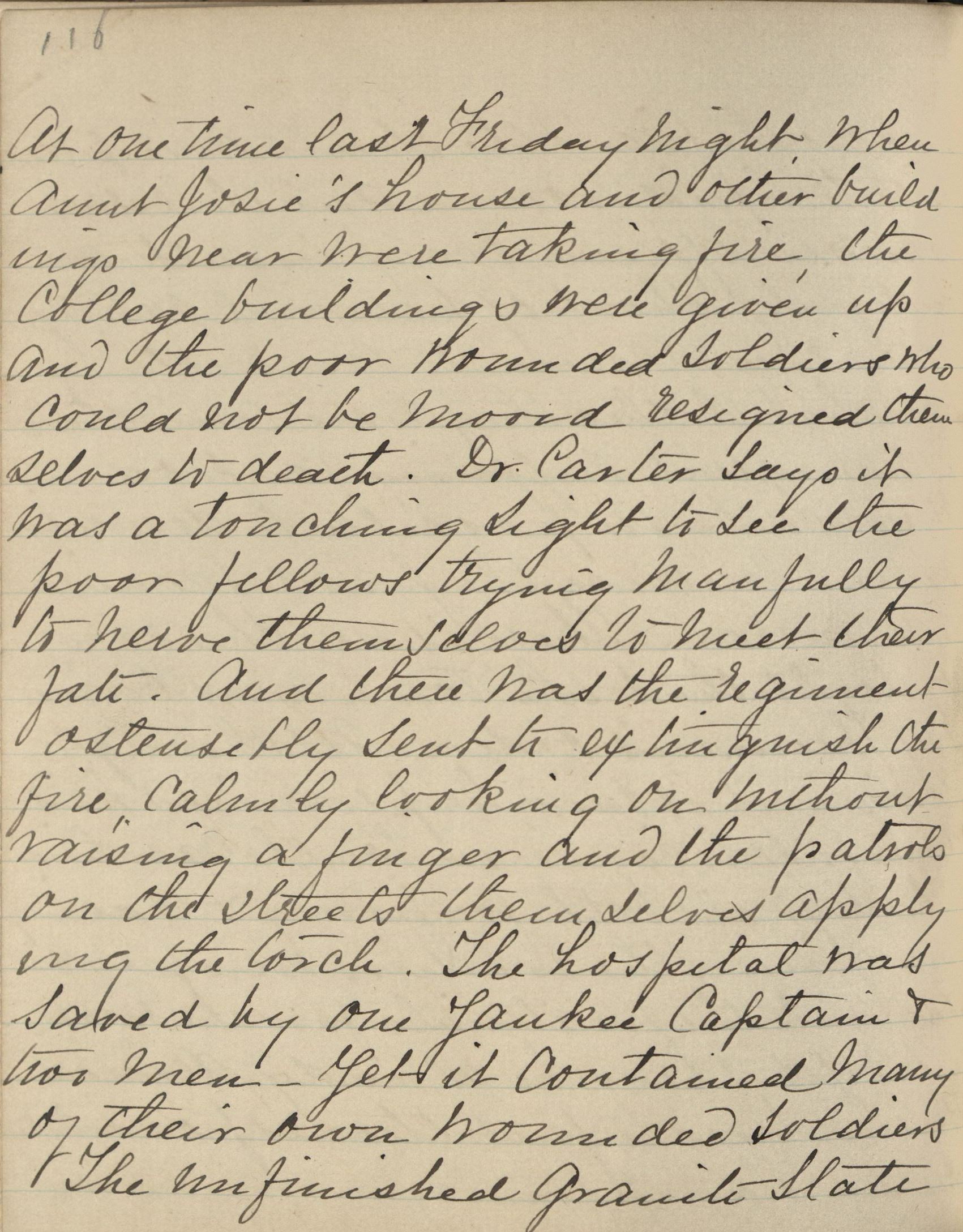 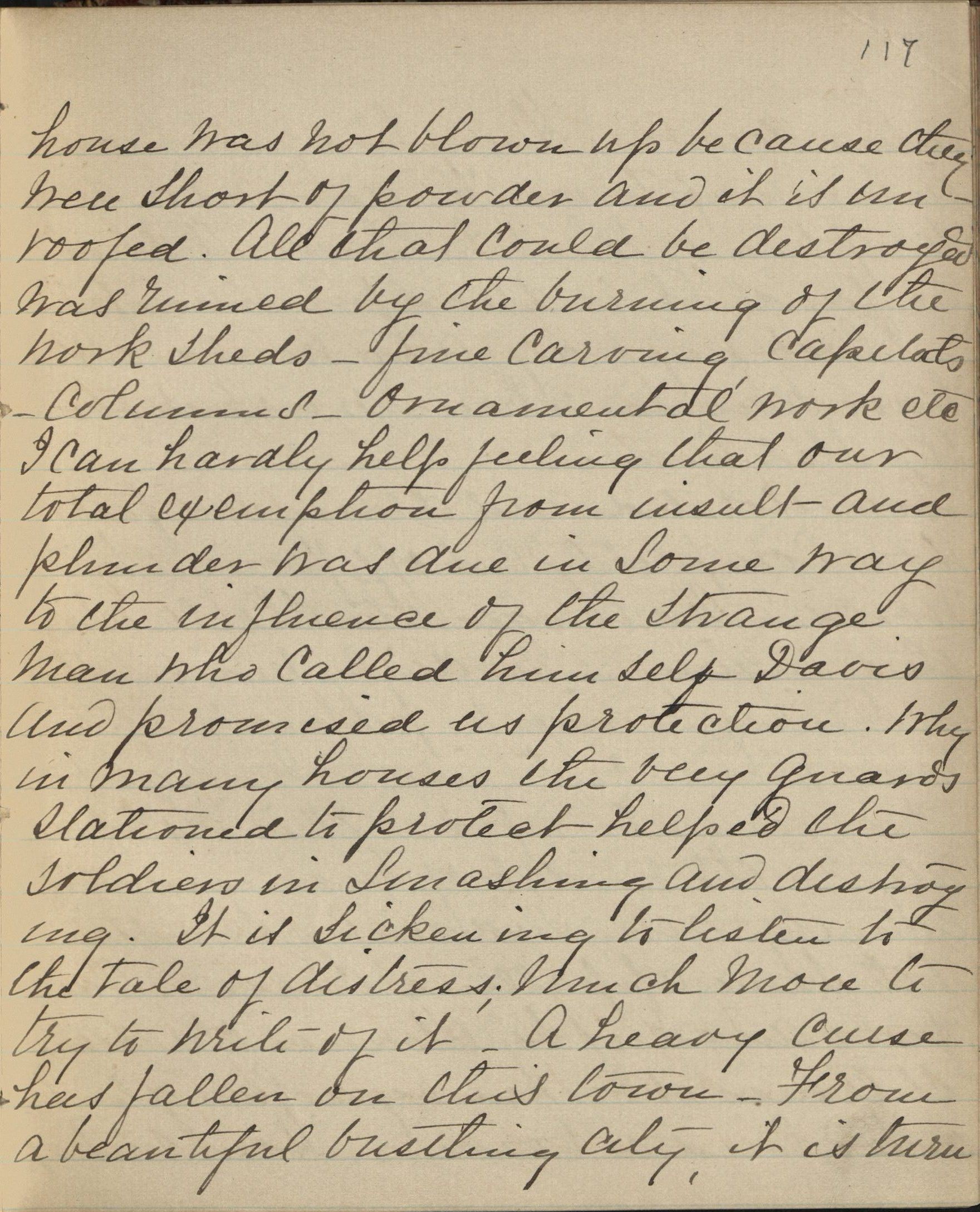 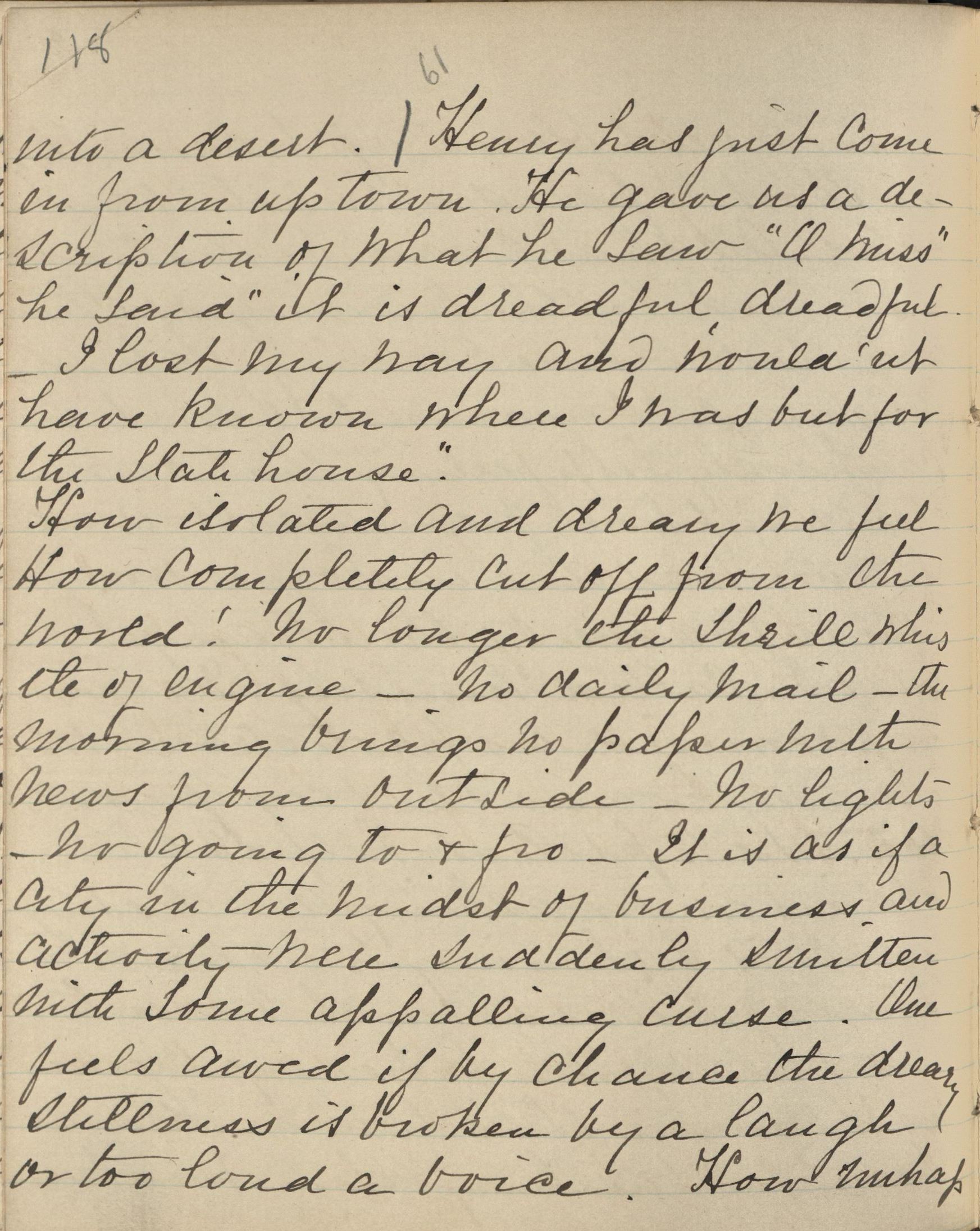 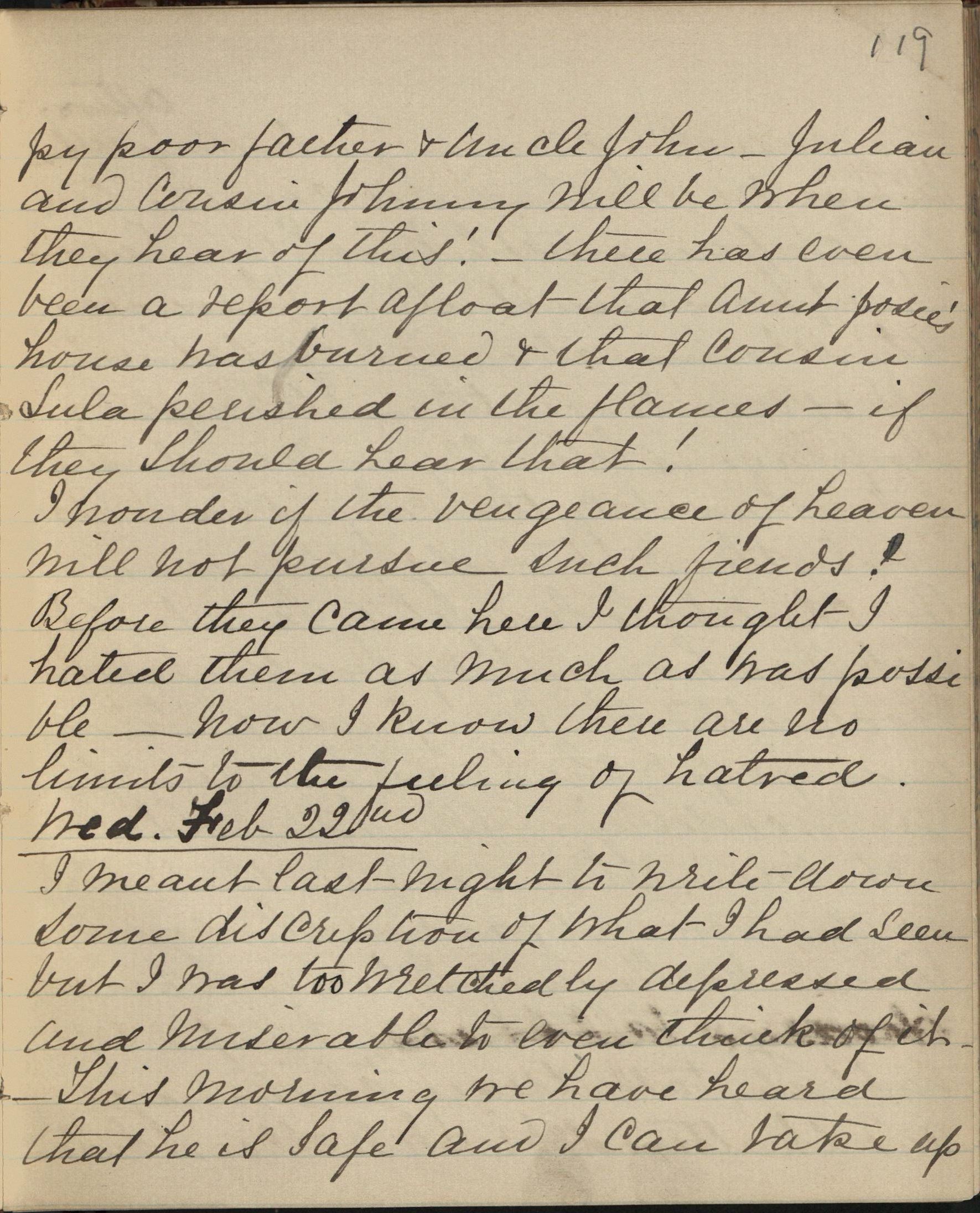 Tuesday 21st.
– The night with its fear of stragglers is past and we may breathe more freely but not less sadly. The destruction and desolation around us which we could not feel while under such excitement and fear now exerts its full sway. Sad? – The very air is fraught with sadness and silence. The few noises that break the stillness seem melancholy and the sun does not seem to shine as brightly, seeming to be dimmed by the sight of so much misery. I was at Aunt Josie’s this morning and there learned for the first time the extent of suffering. O God! When we think of what we have escaped and how almost miraculously we have been saved we should never rise from our knees. There is not a house I believe in Columbia that has not been pillaged – those that the flames spared were entered by brutal soldiery and everything wantonly destroyed. The streets were filled with terrified women and children who were offered every insult and indignity short of personal outrage – they were allowed to save nothing but what clothes they wore, and there is now great suffering for food. It would be impossible to describe or even to conceive the pandemonium and horror. There is no shadow of doubt that the town was burned by Sherman’s order. All through Georgia, it is said, he promised his men full license in South Carolina. The signals both for firing and ceasing were given – the soldiers were provided with the materials for the work – and yet I hear that he already denies it and tries to put the responsibility on Gen. Hampton. At one time Friday night, when Aunt Josie’s house and other buildings were taking fire, the College buildings were given up and the poor wounded soldiers who could not be moved resigned themselves to death.

Dr. Carter says it was a touching sight to see the poor fellows trying manfully to nerve themselves to meet their fate. And there was the regiment ostensible sent to extinguish the fire, calmly looking on without raising a finger, and the patriots on the streets themselves applying the torch. The hospital was saved by one Yankee Captain and two men – yet it contained many of their own wounded soldiers. The unfinished granite State house was not blown up because they were short of powder and it is unroofed. All that could be destroyed was ruined by the burning of the work-sheds – fine carving, capitals, columns, ornamental work etc., I can hardly help feeling that our total exemption from insult and plunder was due in some way to the influence of the strange man who called himself Davis and promised us protection. Why in many houses the very guards stationed to protect helped the soldiers in smashing and destroying. It is sickening to listen to the tale of distress, much more to try to write of it. A heavy curse has fallen on this town – from a beautiful bustling city it is turned into a desert.

How desolate and dreary we feel – how completely cut off from the world. No longer the shrill whistle of engine – no daily mail – the morning brings no paper with news from outside – there are no lights – no going to and fro. It is as if a city in the midst of business and activity were suddenly smitten with some appalling curse. One feels awed if by chance the dreary stillness is broken by a laugh or too loud a voice. How unhappy poor father and Uncle John – Julian and Cousin Johnny will be when they hear of this. There has even been a report afloat that Aunt Josie’s house was burned and Cousin Lula perished in the flames – if they should hear that!

I wonder if the vengeance of heaven will not pursue such fiends! Before they came here I thought I hated them as much as was possible – now I know there are no limits to the feeling of hatred.