22 February 1865: “I have seen the “Abomination of Desolation”. It is even worse than I thought. The place is literally in ruins.””

Posted on 22 Feb ’15 by Rebecca Williams 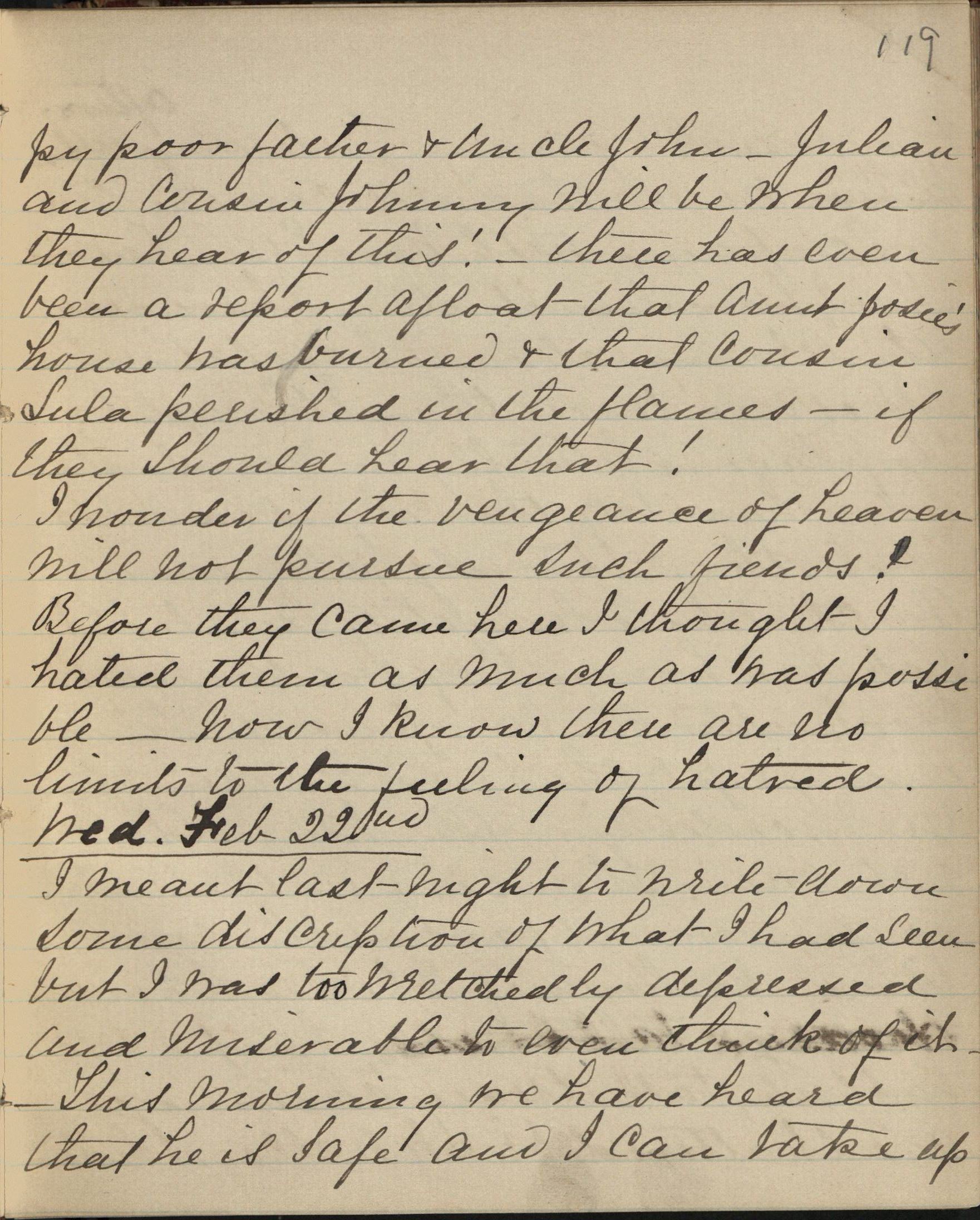 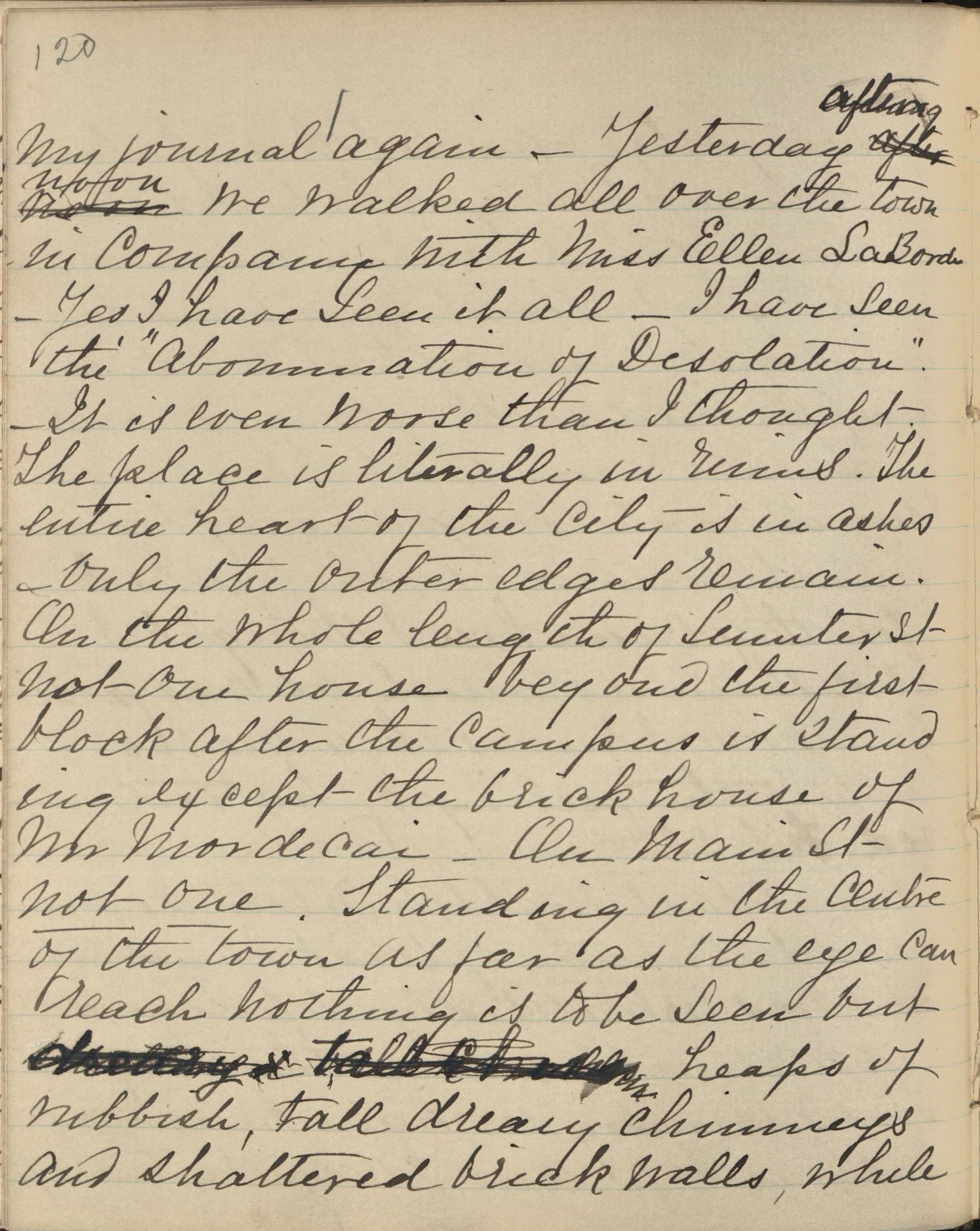 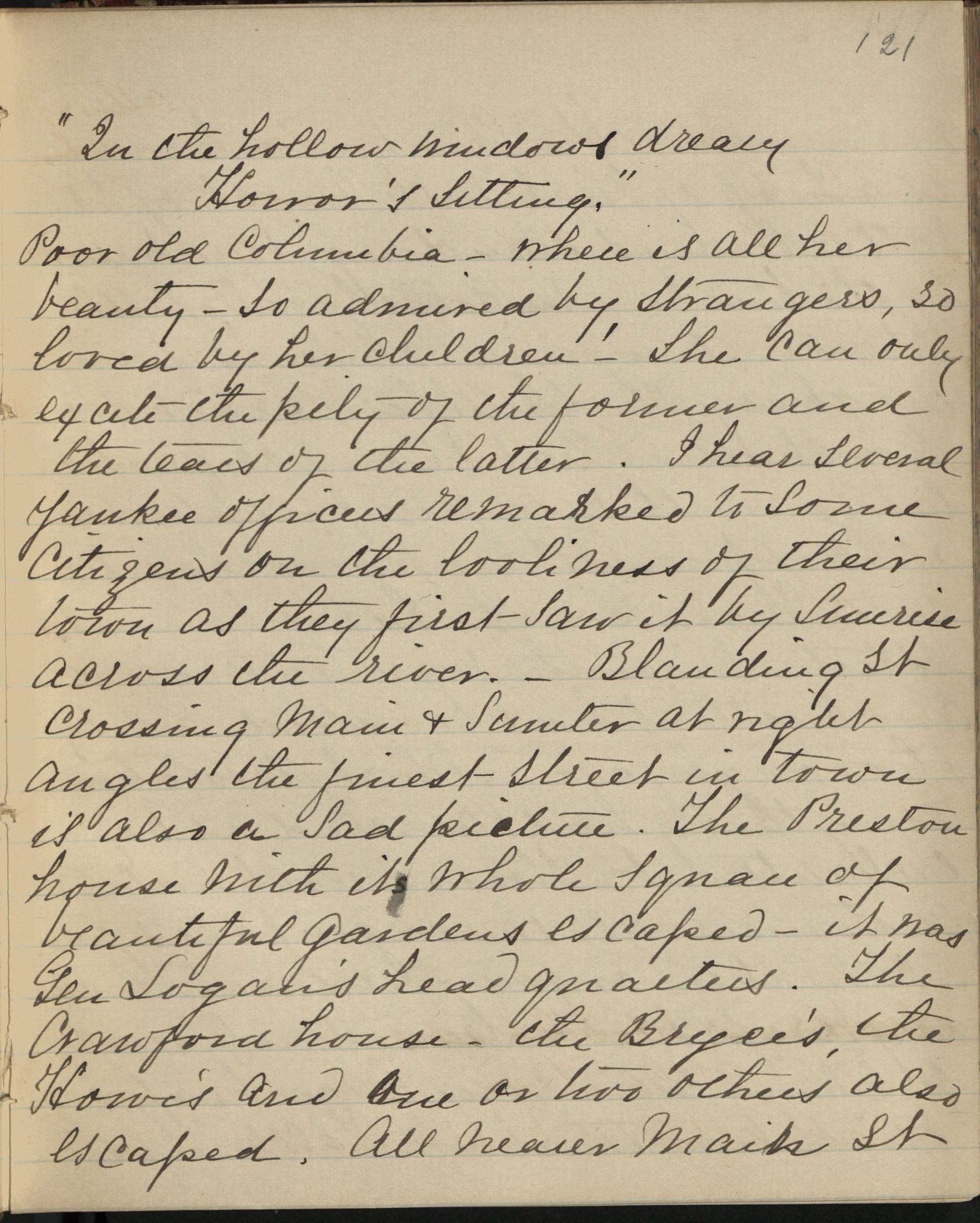 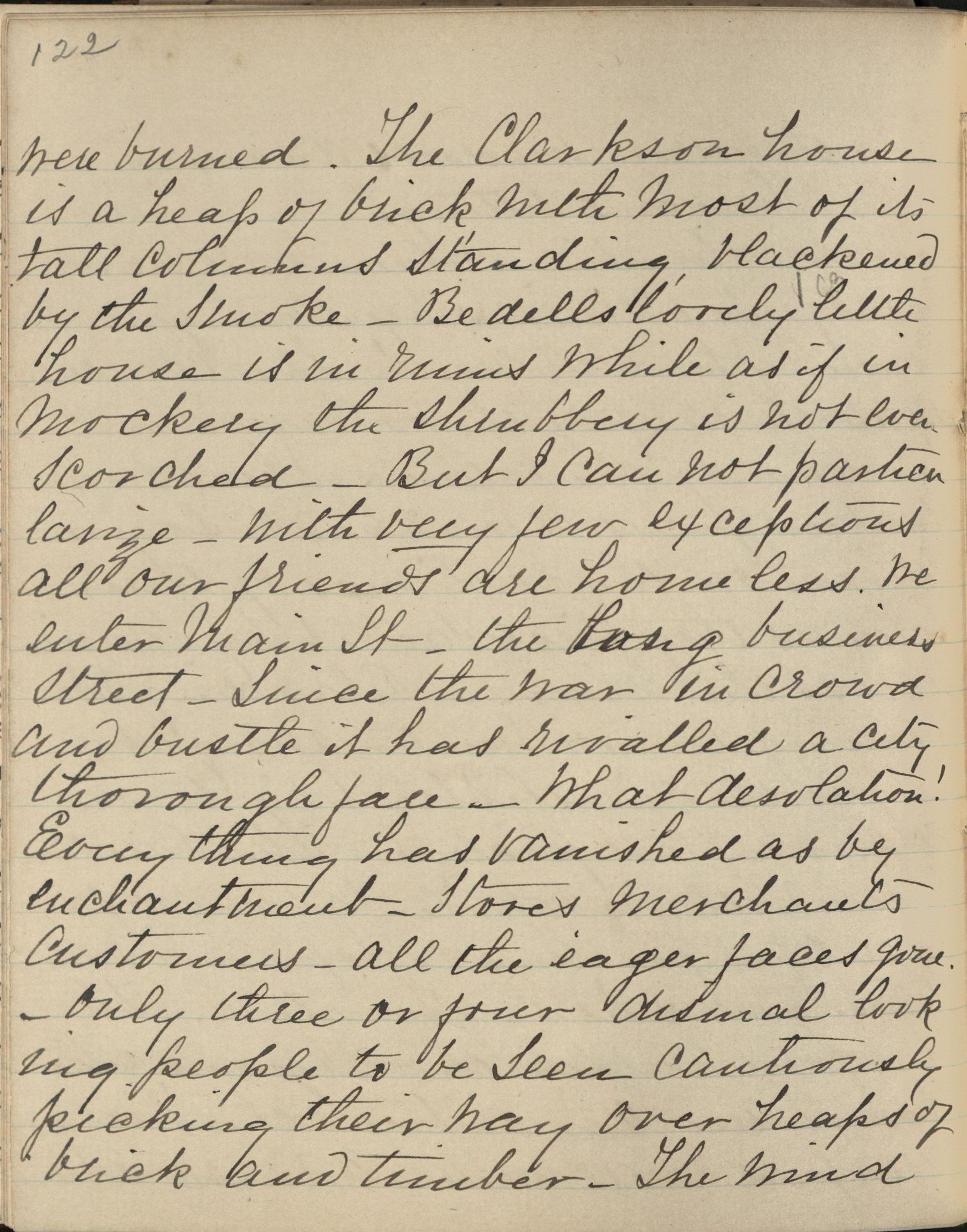 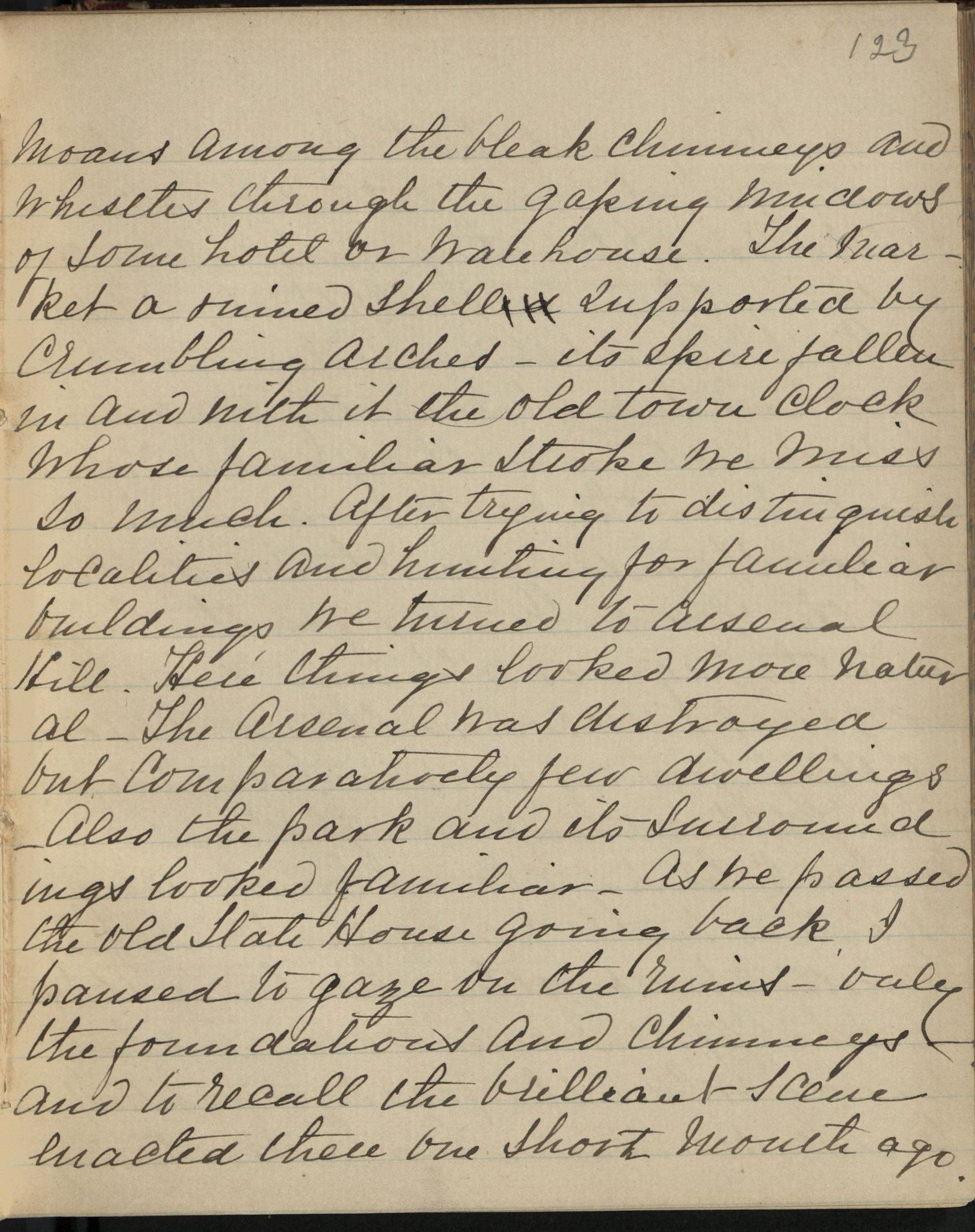 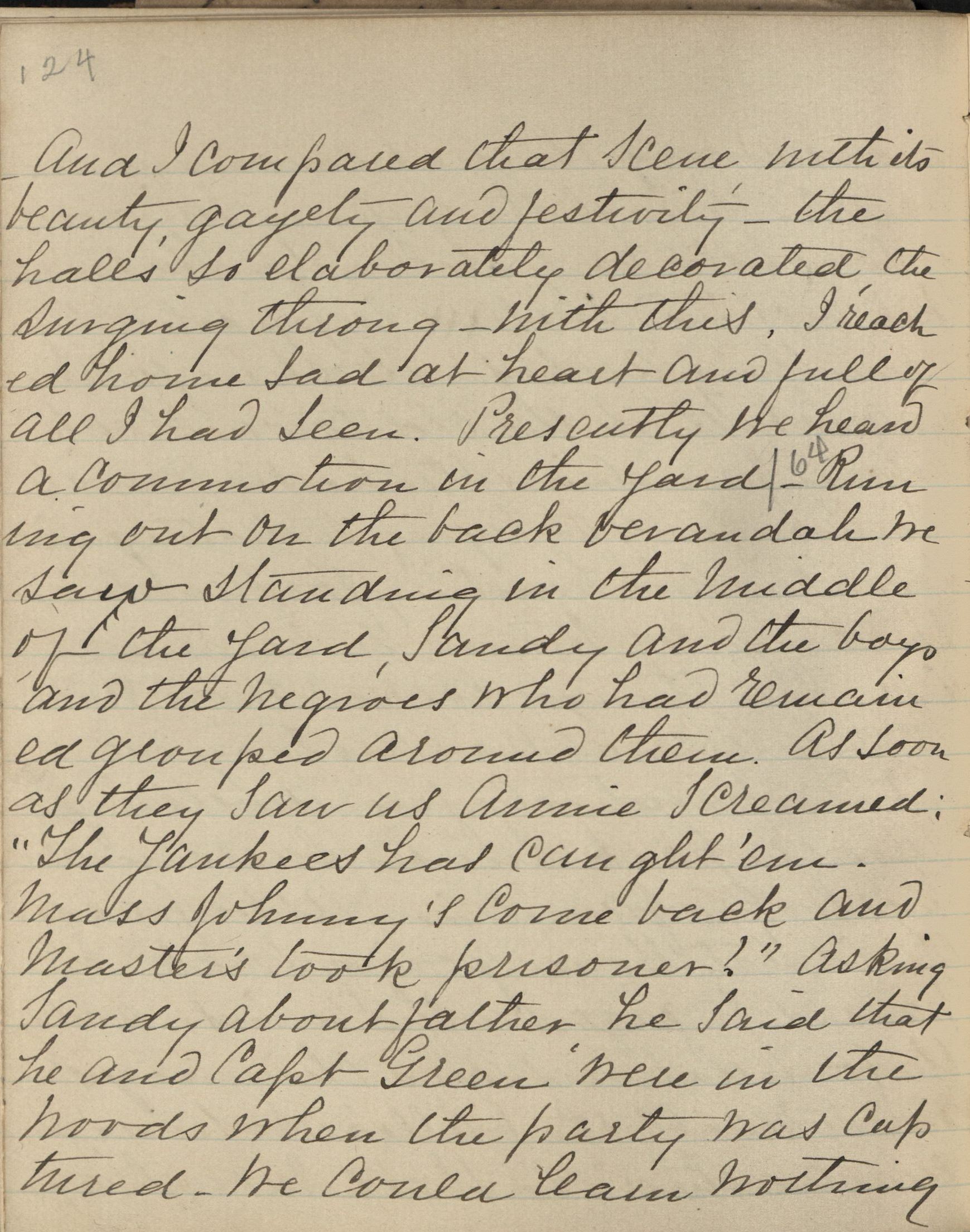 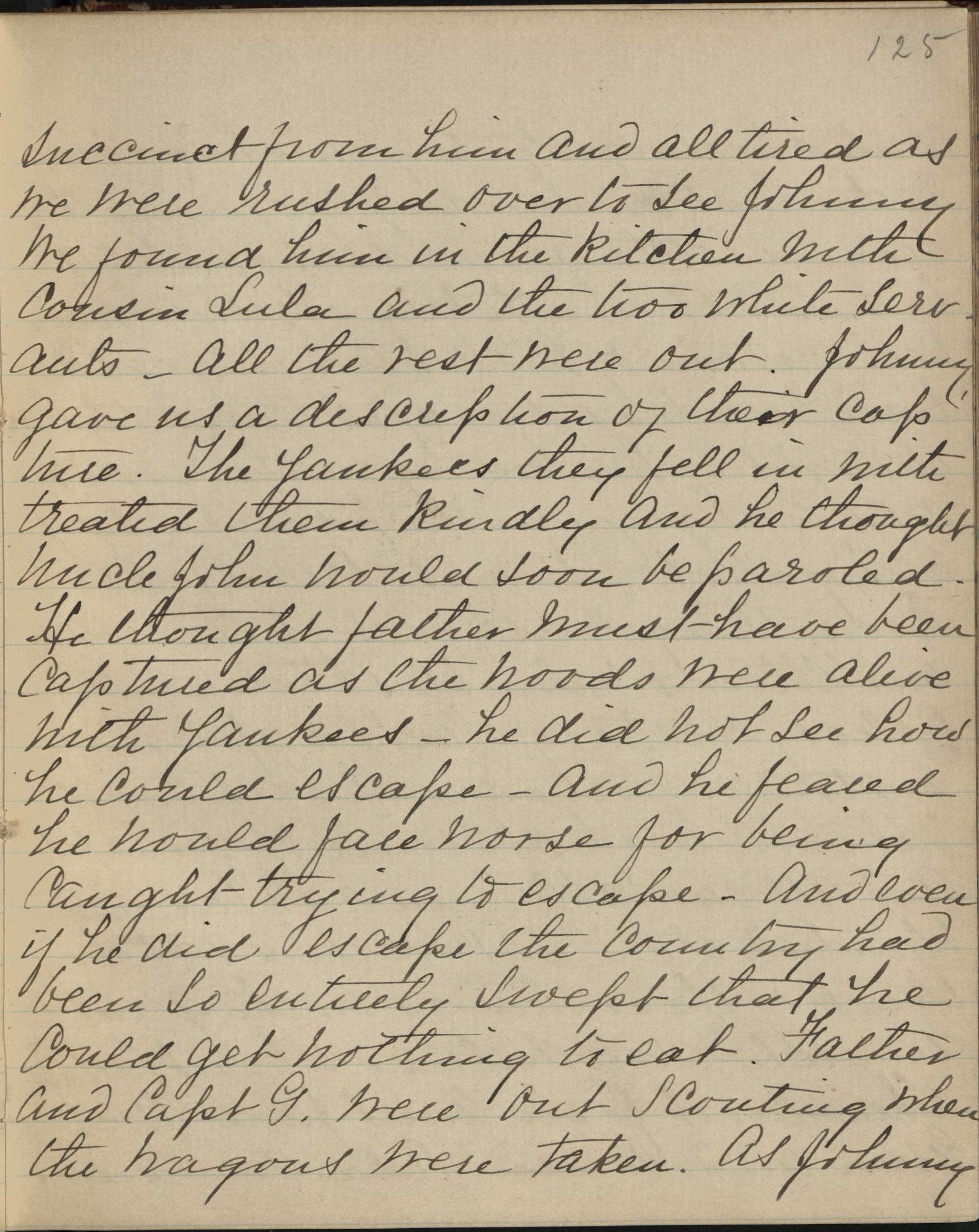 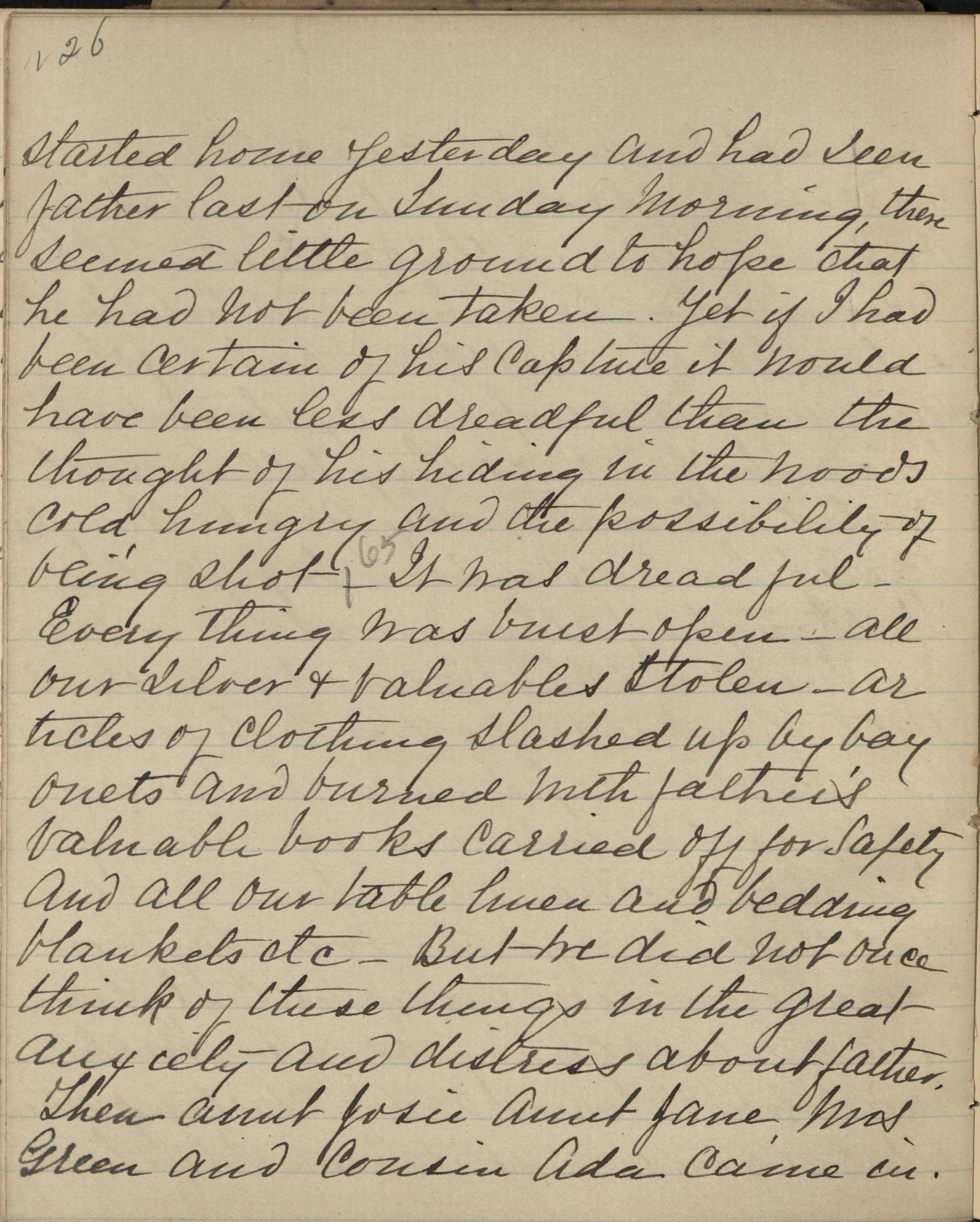 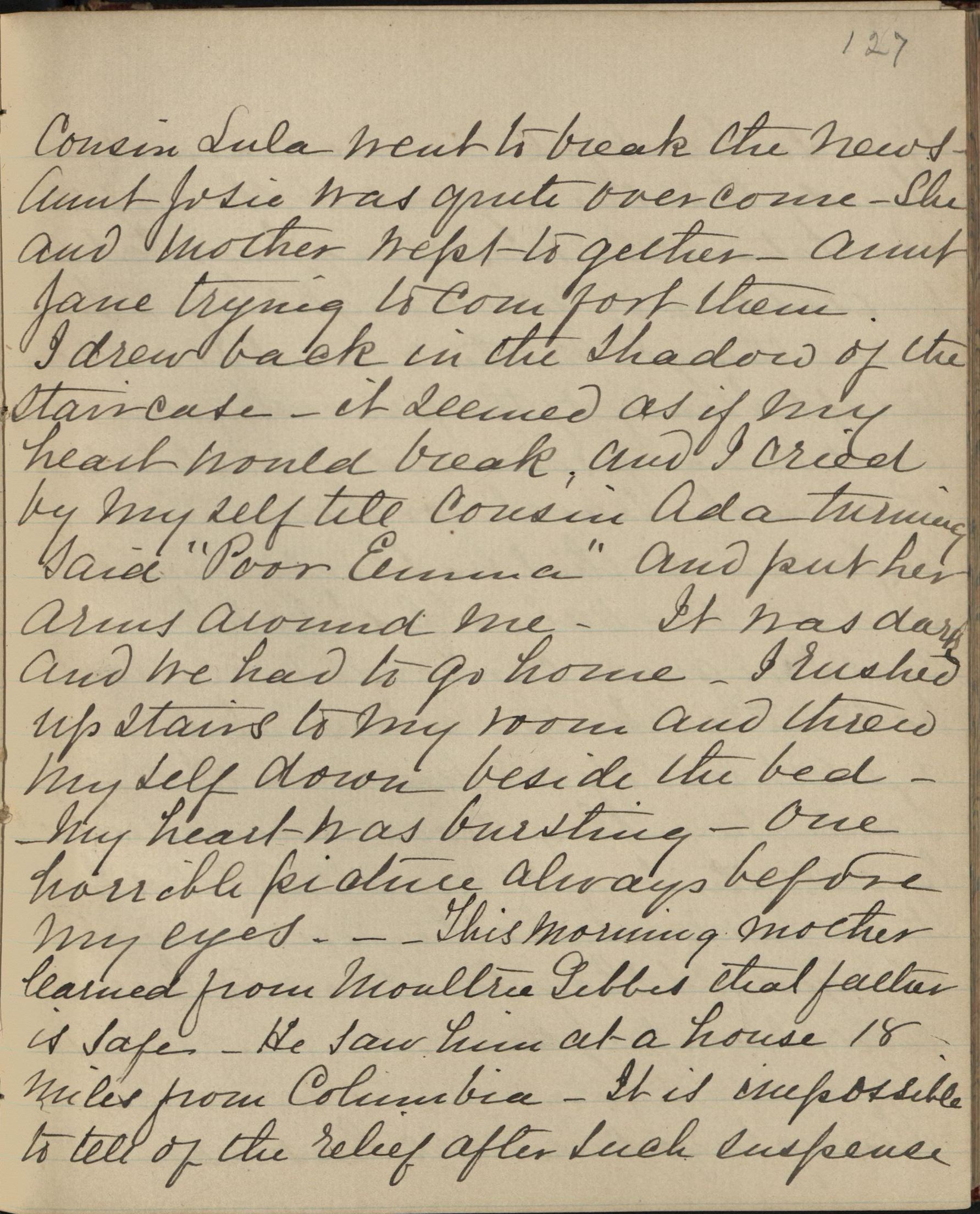 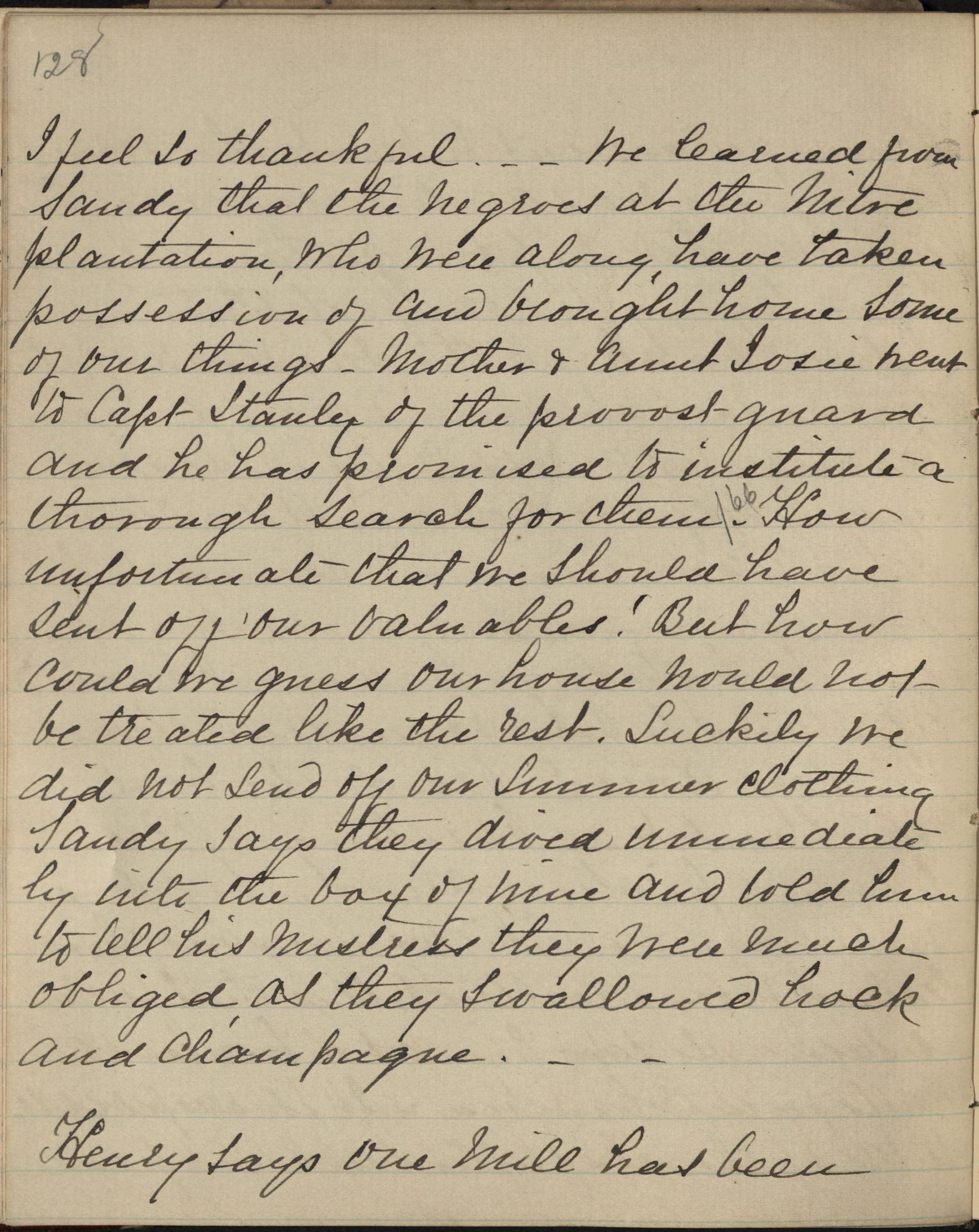 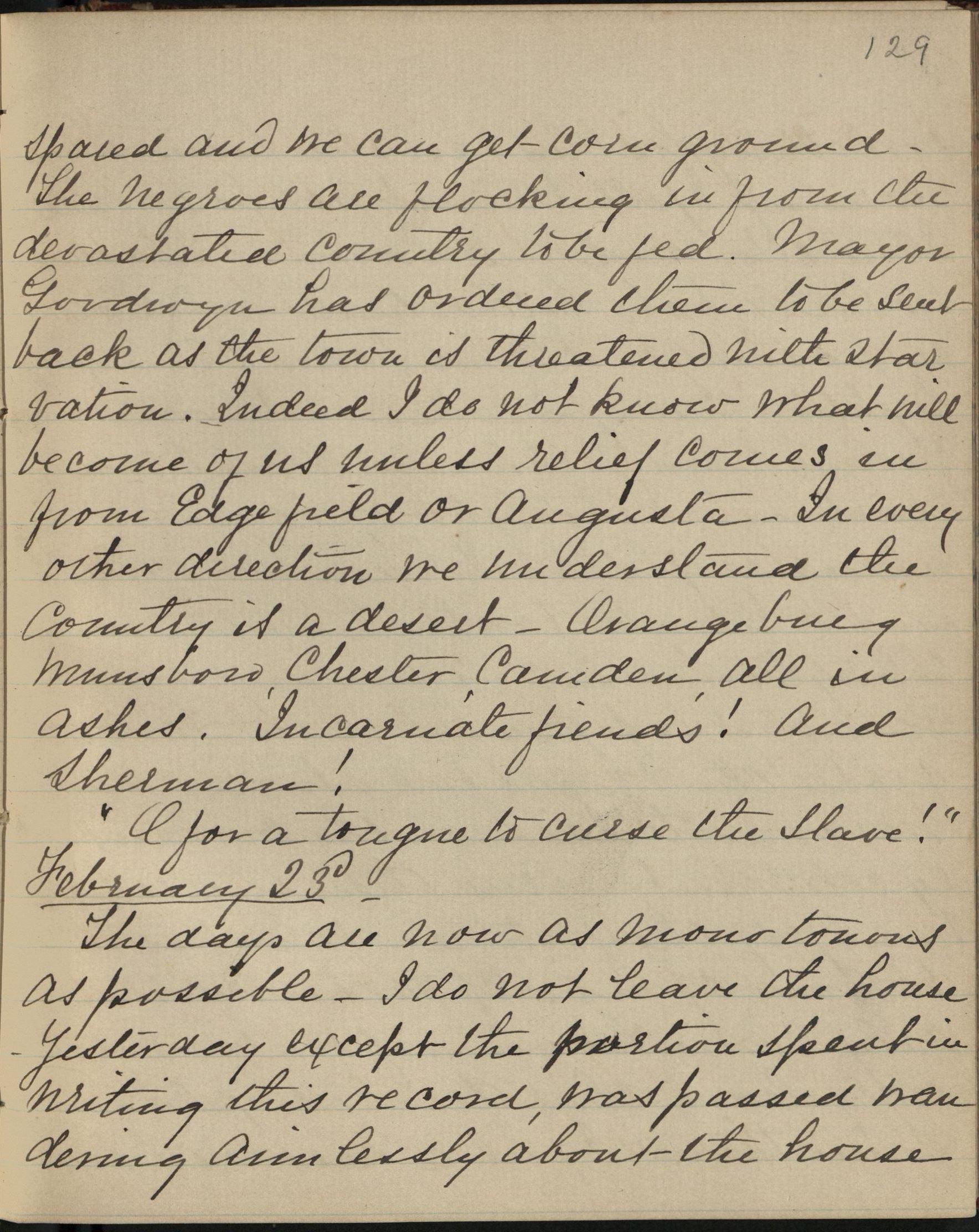 Wed. Feb. 22nd.
– I meant last night to write down some description of what I had seen, but was too wretchedly depressed and miserable to even think of it. This morning we have heard that he is safe and I can take up my journal again. Yesterday afternoon we walked all over the town in company with Miss Ellen LaBordo – Yes, I have seen it all – I have seen the “Abomination of Desolation”. It is even worse than I thought. The place is literally in ruins. The entire heart of the city is in ashes – only the outer edges remain. On the whole length of Sumter Street not one house beyond the first block after the Campus is standing, except the brick house of Mr. Mordecai. Standing in the centre of the town, as far as the eye can reach nothing is to be seen but heaps of rubbish, tall dreary chimneys and shattered brick walls, while “In the hollow windows, dreary horror’s sitting”. Poor old Columbia – where is all her beauty – so admired by strangers – so loved by her children! She can only excite the pity of the former and the tears of the latter. I hear several Yankee officers remarked to some citizens on the loveliness of their town as they first saw it by sunrise across the river.

Blanding Street, crossing Main and Sumter at right angles, the finest street in town, is also a sad picture. The Preston house with its whole square of beautiful gardens escaped. It was Gen. Logan’s headquarters. The Crawford house – the Bryce’s – the Howe’s and one or two others also escaped. All nearer Main Street were burned. The Clarkson house is a heap of brick with most of its tall columns standing, blackened by the smoke. Bedell’s lovely little house is in ruins while as if in mockery the shrubbery is not even scorched – But I cannot particularize – with very few exceptions all our friends are homeless. We enter Main Street – since the war in crowd and bustle it has rivalled a city thoroughfare – what desolation! Everything has vanished as by enchantment – stores, merchants, customers – all the eager faces gone – only three or four dismal looking people to be seen picking their way over heaps of rubbish, brick and timbers. The wind moans among the bleak chimneys and whistles through the gaping windows of some hotel or warehouse. The market a ruined shell supported by crumbling arches – its spire fallen in and with it the old town clock whose familiar stroke we miss so much. After trying to distinguish localities and hunting for familiar buildings we turned to Arsenal Hill. Here things looked more natural. The Arsenal was destroyed but comparatively few dwellings. Also the Park and its surroundings looked familiar. As we passed the old State house going back I paused to gaze on the ruins – only the foundations and chimneys – and to recall the brilliant scene enacted there one short month ago. And I compared that scene with its beauty, gayety and festivity – the halls so elaborately decorated – the surging throng – with this. I reached home sad at heart and full of all I had seen. Presently we heard a commotion in the yard. Running out on the back verandah we saw, standing in the middle of the yard, Sandy and the boys and the negroes who had remained grouped around them. As soon as they saw us Annie screamed! “The Yankees has caught ’em. Mass Johnny’s come back and Master’s took prisoner.” Asking Sandy about father, he said that he and Capt. Green were in the woods when the party was captured – we could learn nothing succinct from him, and all tired as we were, rushed over to see Johnny. We found him in the kitchen with Cousin Lula and the two white servants – all the rest were out. Johnny gave us a description of their capture. The Yankees they fell in with treated them kindly and he thought Uncle John would soon be paroled. He thought father must have been captured, as the woods were alive with Yankees – he did not see how they could escape, and he feared he would fare worse for trying to escape. And even if he did escape the country had been so entirely swept that he could get nothing to eat. Father and Capt. Green were out scouting when the wagons were taken. As Johnny started home yesterday and had seen father last on Sunday morning, there seemed little grounds to hope that he had not been taken. Yet if I had been certain of his capture it would have been less dreadful than the thought of his hiding in the woods cold and hungry and the possibility of being shot. It was dreadful – everything was burst open – all our silver and valuables stolen – articles of clothing slashed up by bayonets and burned, with father’s valuable books carried off for safety, and all our table linen and bedding, blankets etc.. But we did not once think of these things in the great anxiety and distress about father. Then Aunt Josie and Aunt Jane, Mrs. Green and Cousin Ada came in. Cousin Lula went to break the news. Aunt Josie was quite overcome – she and mother wept together, Aunt Jane trying to comfort them. I drew back in the shadow of the staircase – it seemed as if my heart would break, and I cried by myself till Cousin Ada turning said “poor Emma” and put her arms around me. It was dark and we had to go home. I rushed upstairs to my room and threw myself down beside the bed – my heart was bursting – one horrible picture always before my eyes. This morning mother learned from Moultrie Gibbes that father is safe. He saw him at a house 18 miles from Columbia. It is impossible to tell of the relief after such suspense. I feel so thankful. We learned from Sandy that the negroes at the nitre plantation, who were along, have taken possession of and brought home some of our things. Mother and Aunt Josie went to Capt. Stanley of the provost guard and he has promised to institute a thorough search for them. But how could we guess that our house would not be treated like the rest. Luckily we did not send off our summer clothing. Sandy says they dived immediately into the box of wine and told him to tell his mistress they were much obliged, as they swallowed hock and champagne.

Henry says one mill has been spared and we can get corn ground. The negroes are flocking in from the devastated country to be fed. Mayor Goodwyn has ordered them to be sent back, as the town is threatened with starvation. Indeed I do not know what will become of us unless relief comes in, from Edgefield or Augusta. In every other direction we understand the country is a desert – Orangeburg, Winnsboro’, Chester, Camden – all in ashes. Incarnate fiends! And Sherman! – “O for a tongue to curse the slave.”