6 March 1865: ” What have you decided to do with your family and yourself in case the enemy come to Raleigh?”

Posted on 6 Mar ’15 by Biff Hollingsworth

Item Description: William Horn Battle was born in Edgecombe County in 1802, graduated from the University of North Carolina in 1820. He served on a commission that revised the statutory laws of North Carolina in 1833. In 1840, he was appointed a superior court judge, and in 1852, received a permanent appointment to the state supreme court. He moved his family to Chapel Hill in 1843 so that his sons could attend the university.  In this letter, Judge Battle writes to his son, Kemp, about many issues facing the South including the lack of food for civilians and the army, and the approach and retreat of Sherman on Fayetteville, NC. He reveals telling opinions about the state of South at the time. 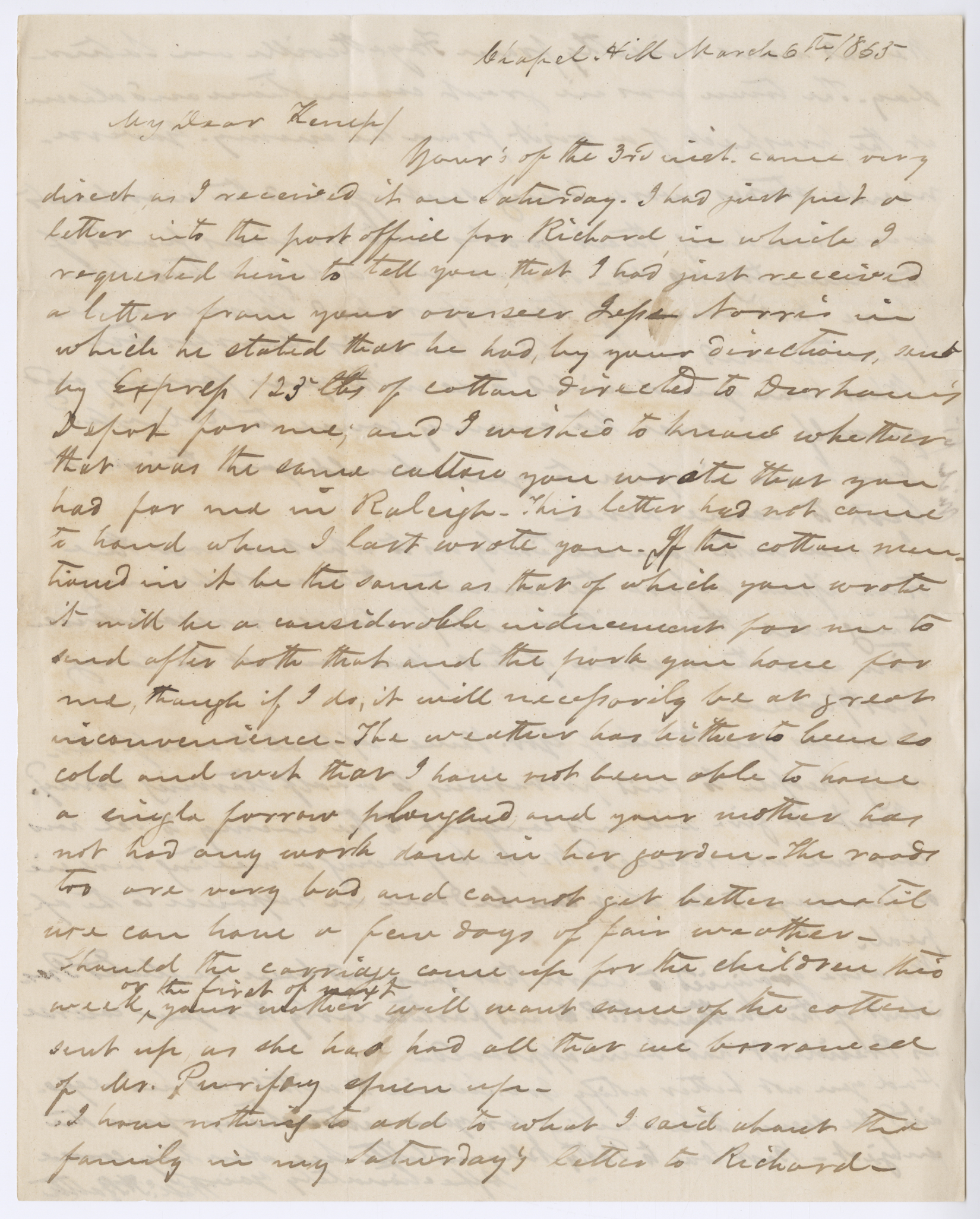 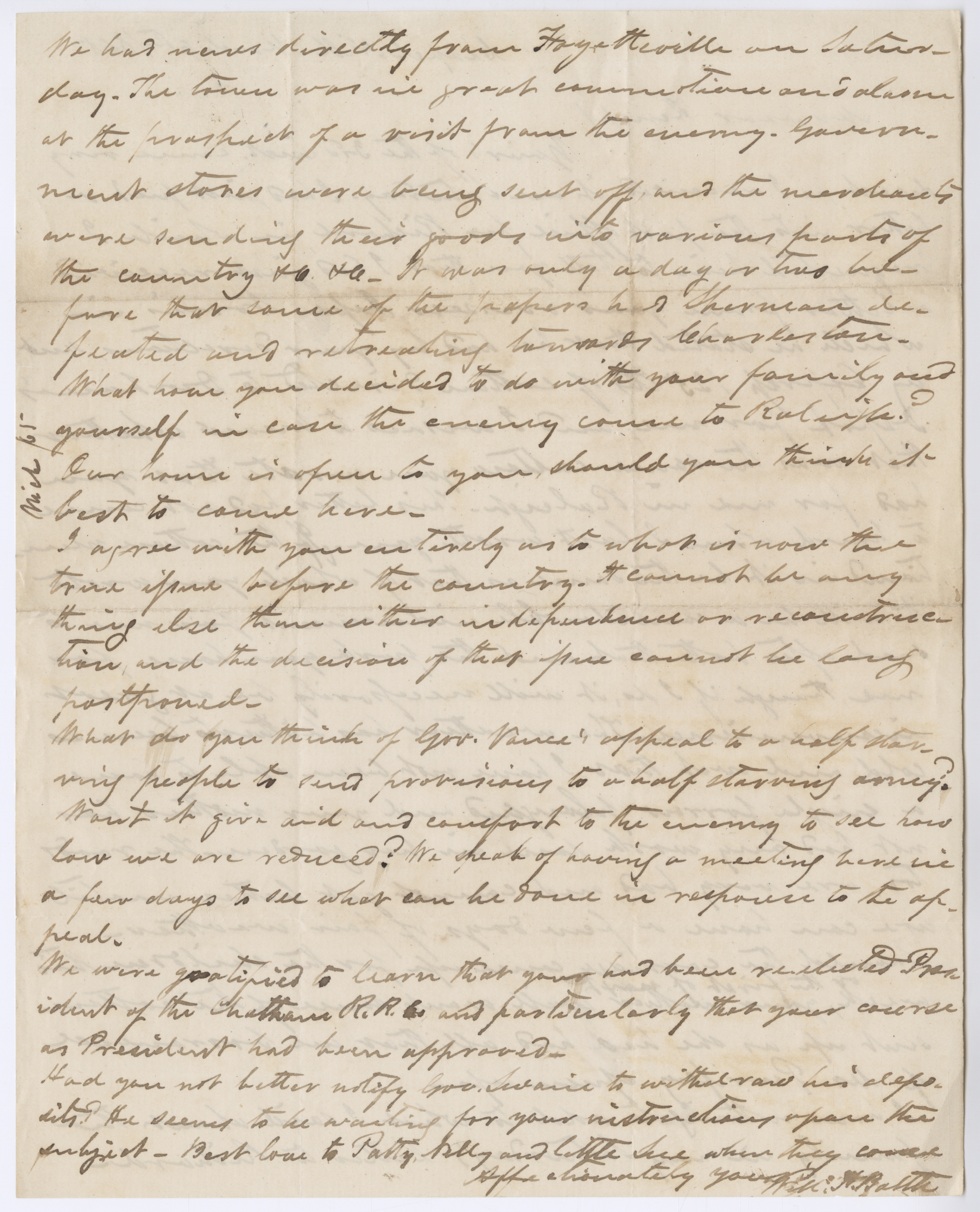 Yours of the 3rd just came very direct as I received it on Saturday. I had just put a letter into the post office for Richmond in which I requested him to tell you that I had just received a letter from your overseer Jesse Norris in which he stated that he had, by your directions sent by express 123 lbs of cotton directed to Durham’s Depot for me; and I wished to know whether that was the same cotton you wrote that you had for me in Raleigh. This letter had not come to hand when I last wrote you. If the cotton mentioned in it be the same as that of which you wrote it will be a considerable inducement for me to send after both that and the pork you have for me, though if I do, it will necessarily be at great inconvenience. The weather has hitherto been so cold and wet that I have not been able to have a single furrow ploughed and your mother has not had any work done in her garden. The roads too are very bad and cannot get better until we can have a few days of fair weather. Should the carriage come up for the children this week, or the first of next, your mother will want some of the cotton sent up, as she had had all that we borrowed of us. P? spun up.

; I have nothing to add to what I said about the family in my Saturday’s letter to Richmond. We had news directly from Fayetteville on Saturday. The town was in great commotion and alarm at the prospect of a visit from the enemy. Government stores were being sent off and the merchants were sending their goods into various parts of the country +c. +c. It was only a day or two before that some of the papers had Sherman defeated and retreating  towards Charleston. What have you decided to do with your family and yourself in case the enemy come to Raleigh? Our home is open to you should you think it best to come here.

I agree with you entirely as to what is now the true issue before the country. It cannot be anything  else than either independence or reconstruction, and the decision of that issue cannot be long postponed.

What do you think of Gov. Vance’s appeal to a half starving people to send provisions to a half starving army? Won’t it give aid and comfort to the enemy to see low we are reduced? We speak of having a meeting here in a few days to see what can be done in response to the appeal.

We were gratified to learn that you had been reelected President  of the Charleston R.R. and particularly that your course as president had been approved.

Had you not better notify Gov. Swaine to withdraw his deposits. He seems to be wanting for your instruction upon the subject. Best love to Patty, Kelly and little Sue when they come.