Item Description: Stephen Tippet Andrews served in the 85th New York Infantry Regiment during the War. In Spring 1864 he was captured by the confederates and imprisoned in Columbia. This letter was written upon his release. He describes his escape from prison in Charlotte and his recapture in Fayetteville. He finally was returned to the Union Army in Annapolis, MD. He expresses joy at his freedom, and longing to return home after four years service in the war. 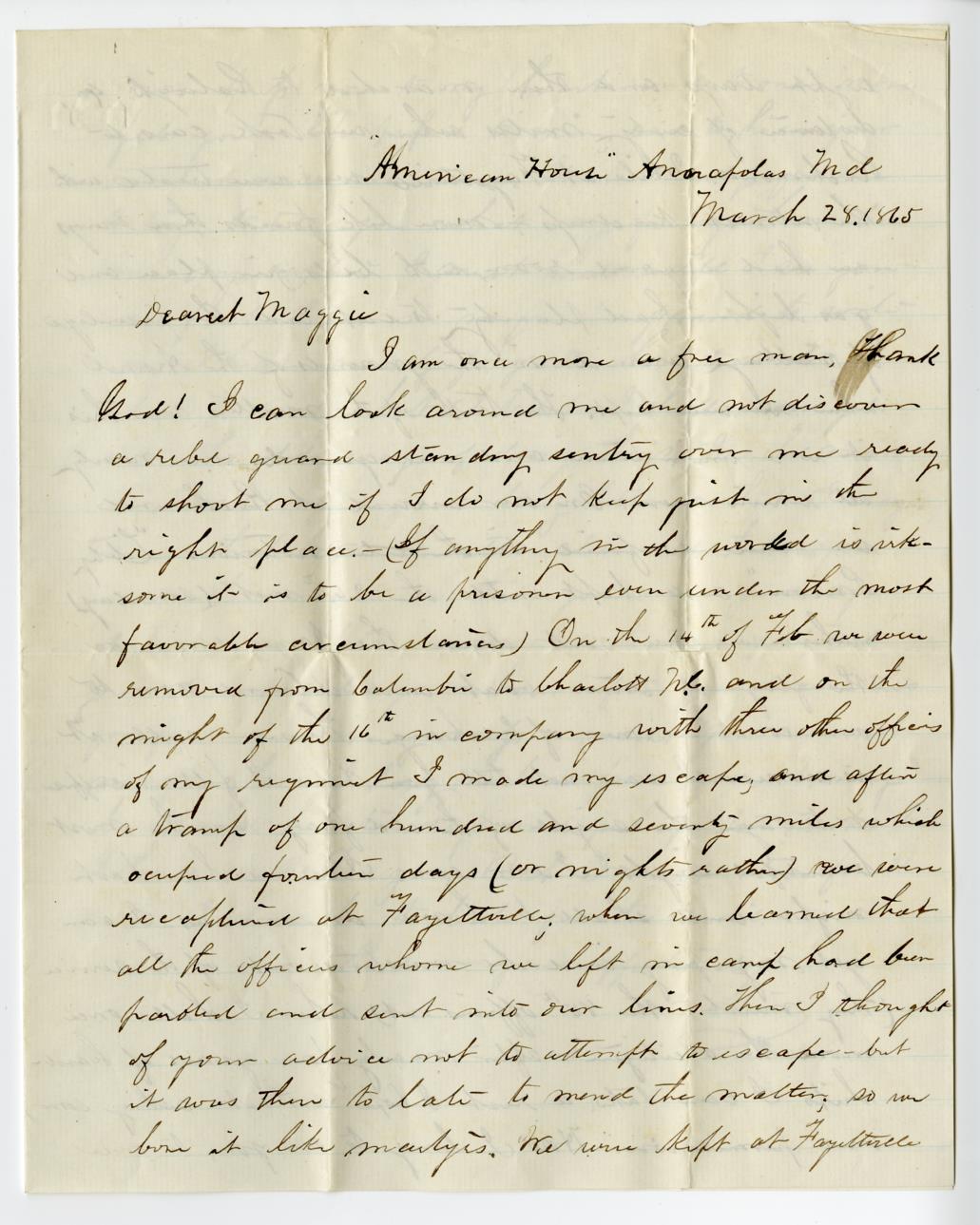 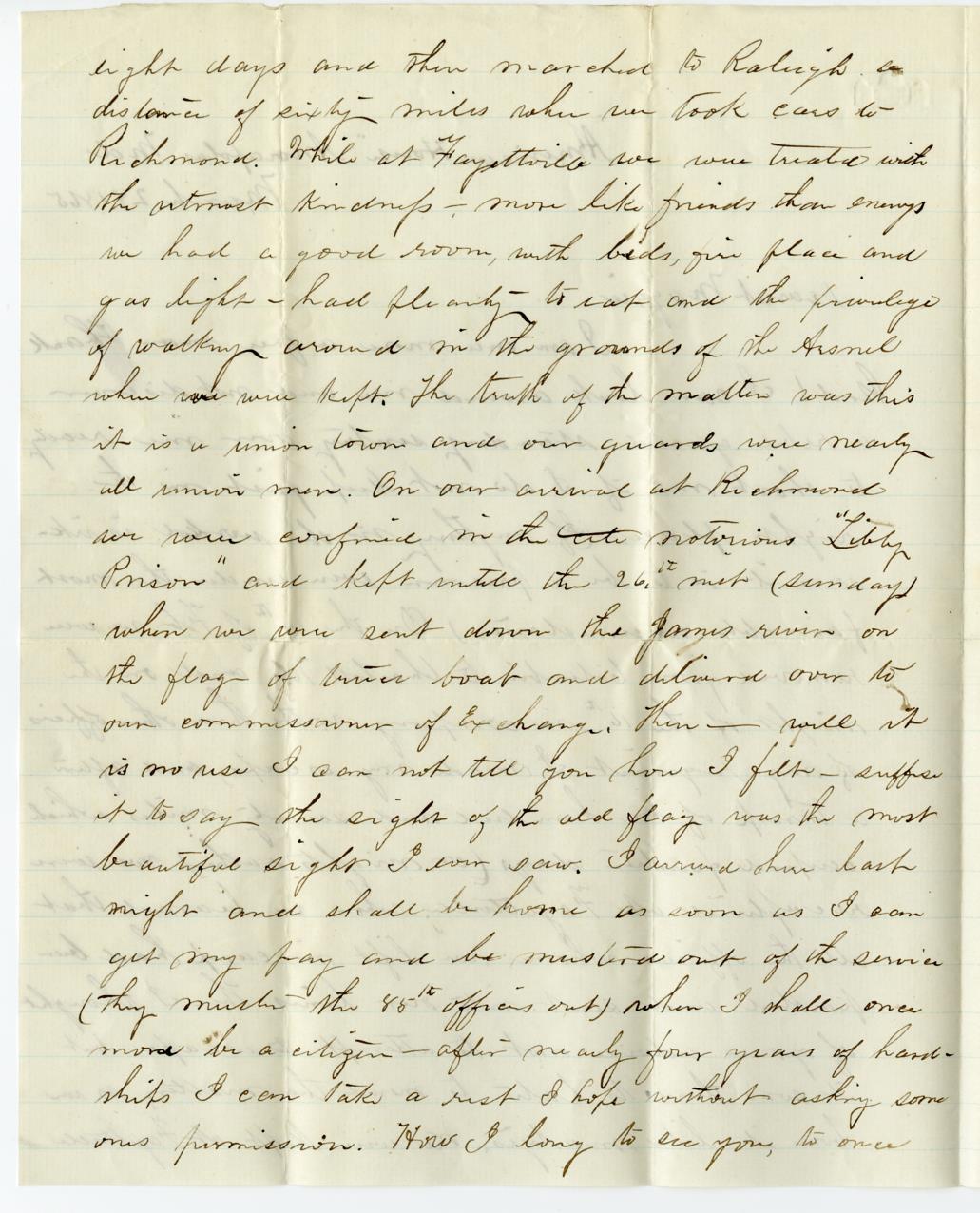 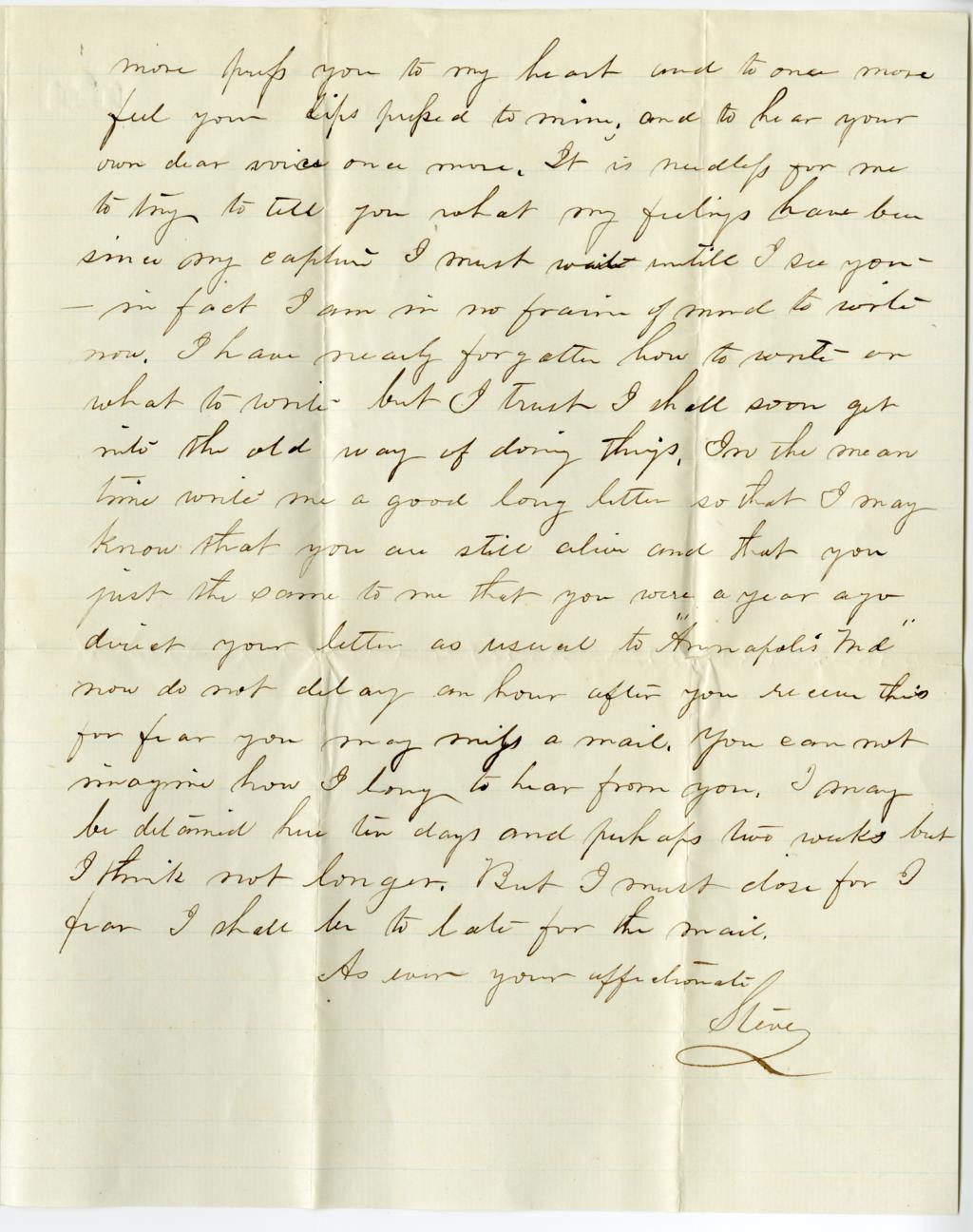 I am once more a free man, Thank God! I can look around me and not discover a rebel guard standing sentry over me ready to shoot me if I do not keep just in the right place. (If anything in the world is irksome it is to be a prisoner even under the most favorable circumstances) On the 14th of Feb. we were removed from Columbia to Charlott N.C.  and on the night of the 16th in company with three other officers of my regiment I made my escape, and after a tramp of one hundred and seventy miles which ocupied fourteen days (or nights rather) we were recaptured in Fayetteville; when we learned that all the officers whom we left in camp had been paroled and sent into our lines. Then I thought of your advice not to attempt to escape-but it was then to late to mend the matter; so we bore it like martyrs. We were kept at Fayetteville eight days and then marched to Raleigh a distance of sixty miles where we took cars to Richmond. While at Fayettville we were treated with the utmost kindness-more like friends than enemys we had a good room, with beds, fire place and gas light – had plenty to eat and the privilege of walking around in the grounds of the ARsnel where we were kept. The truth of the matter was this it is a union town and our guards were nearly all union men. On our arrival at Richmond we were confined in the notorious “Libby Prison” and kept until the 26th mch ( Sunday) when we were sent down the James river on the flag of river boat and delivered over to our commisioner of Exchange. Then – well  it is no use I can not tell you how I felt – suffise to say the sight of the old flag was the most beautiful sight I ever saw. I arrived here last night and shall be home as soon as I can get my pay and be mustered out of the service (they muster the 85th officers out) when I shall once more be a citizen – after nearly four years of hardship I can take rest I hope without asking someones permission. How I love to see you, to once more press you to my heart and to once more feel your lips to mine; and to hear your own dear voice once more. It is needless for me to try to tell you what my feeling shave been since my capture. I must wait until I see you – in fact I am in no frame of mind to write now. I have nearly forgotten how to write or what to write but I trust I shall son get into the way of doing things. In the mean time write me a good long letter so that I may know that you are still alive and that you just the same to me that you were a year ago direct your letter as usual to “Annapolis, Md” now do not delay an hour after you receive this for fear you may miss a mail. You cannot imagine how I long to hear from you. I may be detained here ten days and perhaps two weeks bu I think not longer. But I must close for I fear I shall be to late for the mail.

As ever your affectionate,