1 April 1865: “I am on his side in all this struggle with congress and would be in favor of making him a Dictator today.”

Posted on 1 Apr ’15 by Rebecca Williams

Item Description: Letter dated 1 April 1865 from William Dudley Gale to his wife Kate Polk Gale. Gale joined the Confederate Army to serve as a staff officer for his father in law, General Leonidas Polk. After General Polk’s death in June 1864, Gale was assigned to the staff of General Alexander P. Stewart. In this letter, Gale wishes his daughter a happy birthday and speculates upon the future of the war. 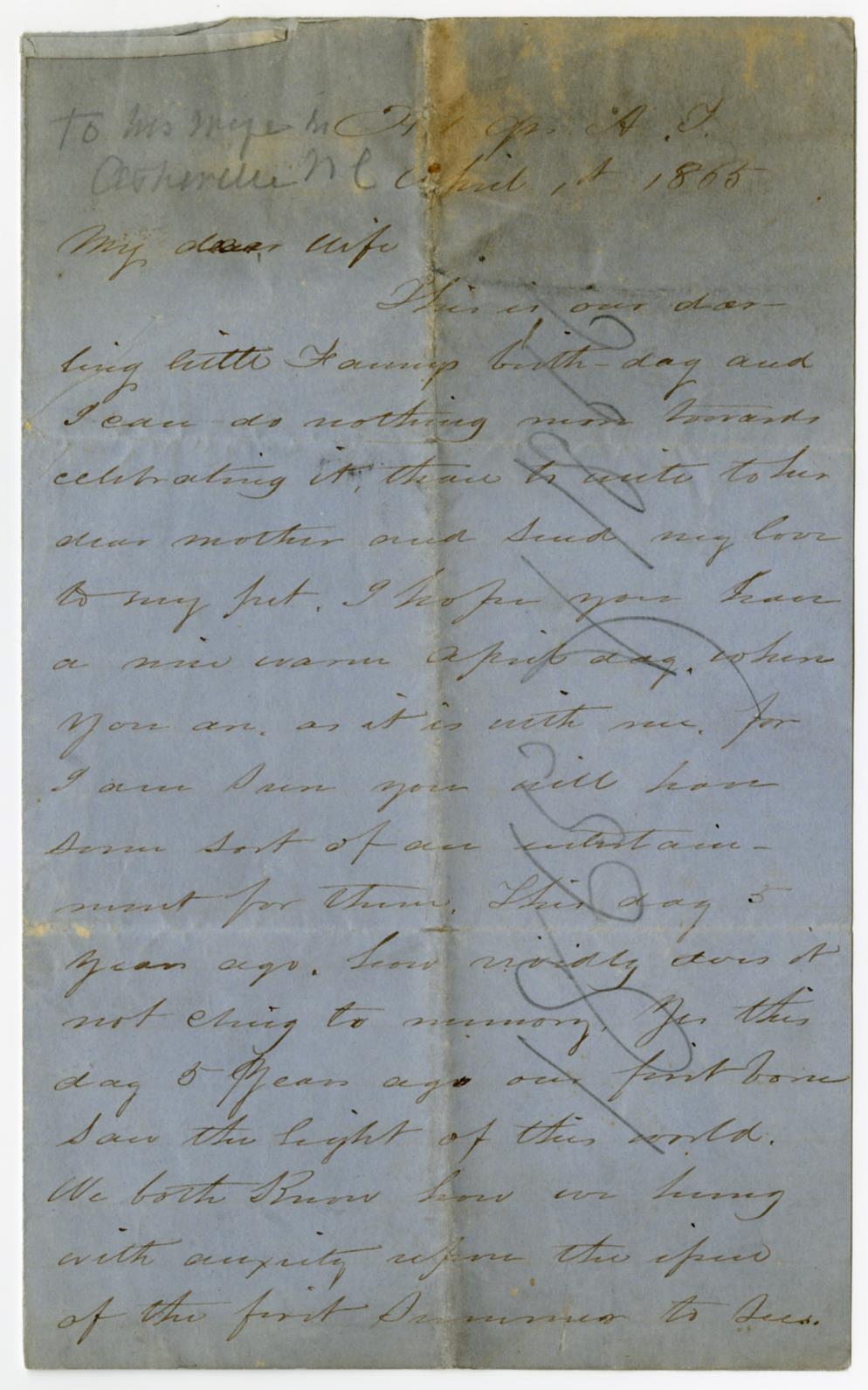 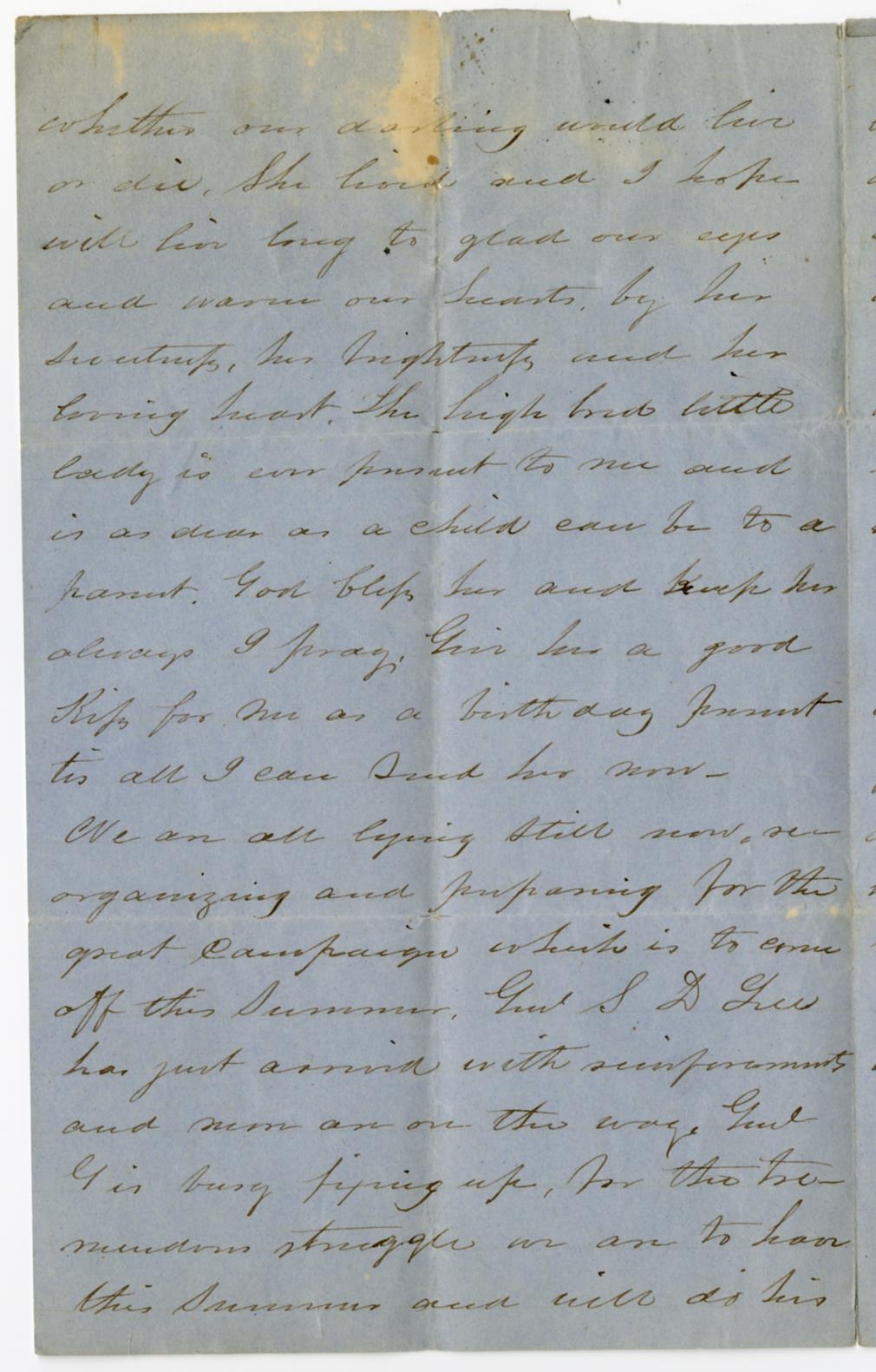 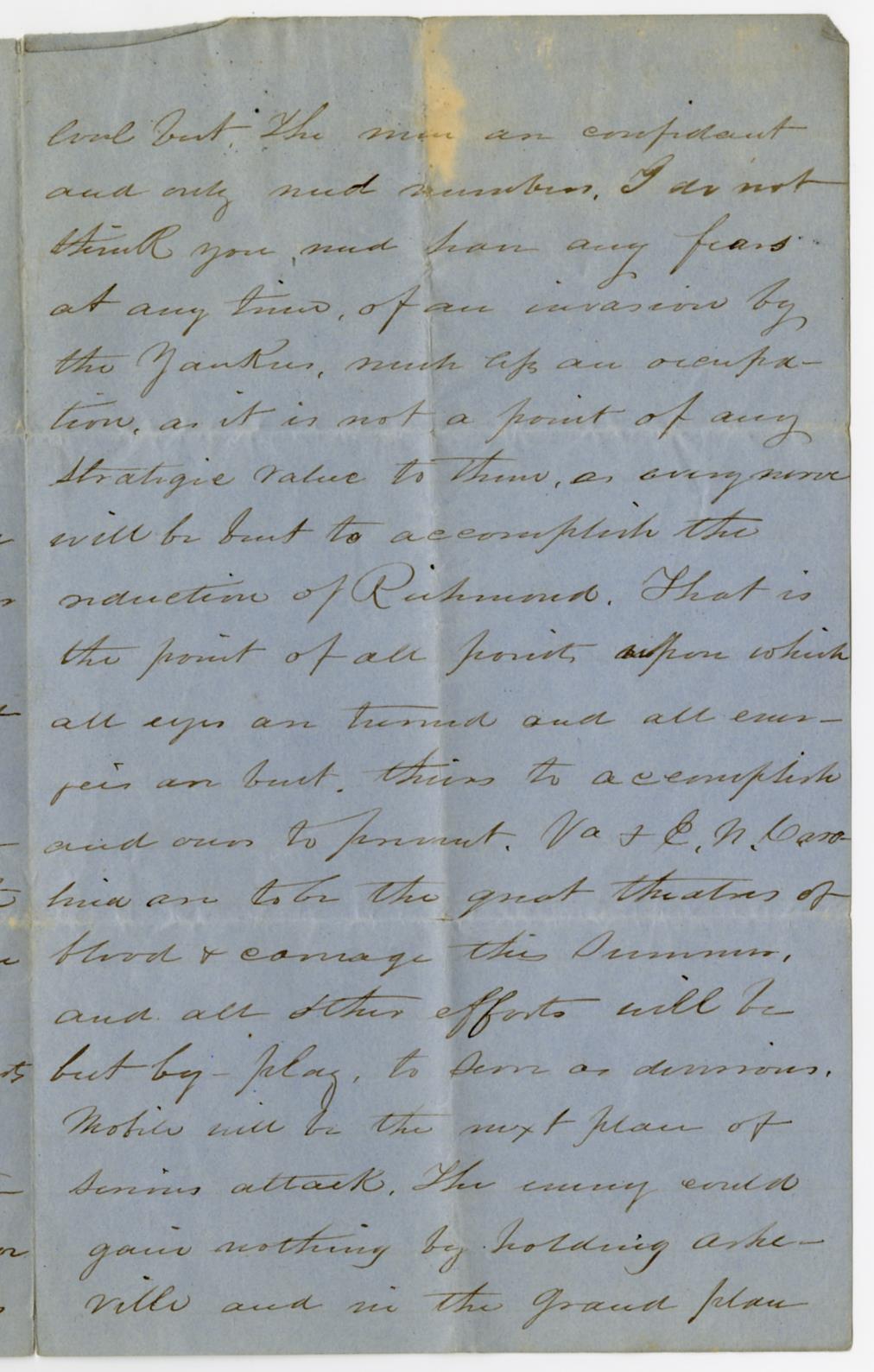 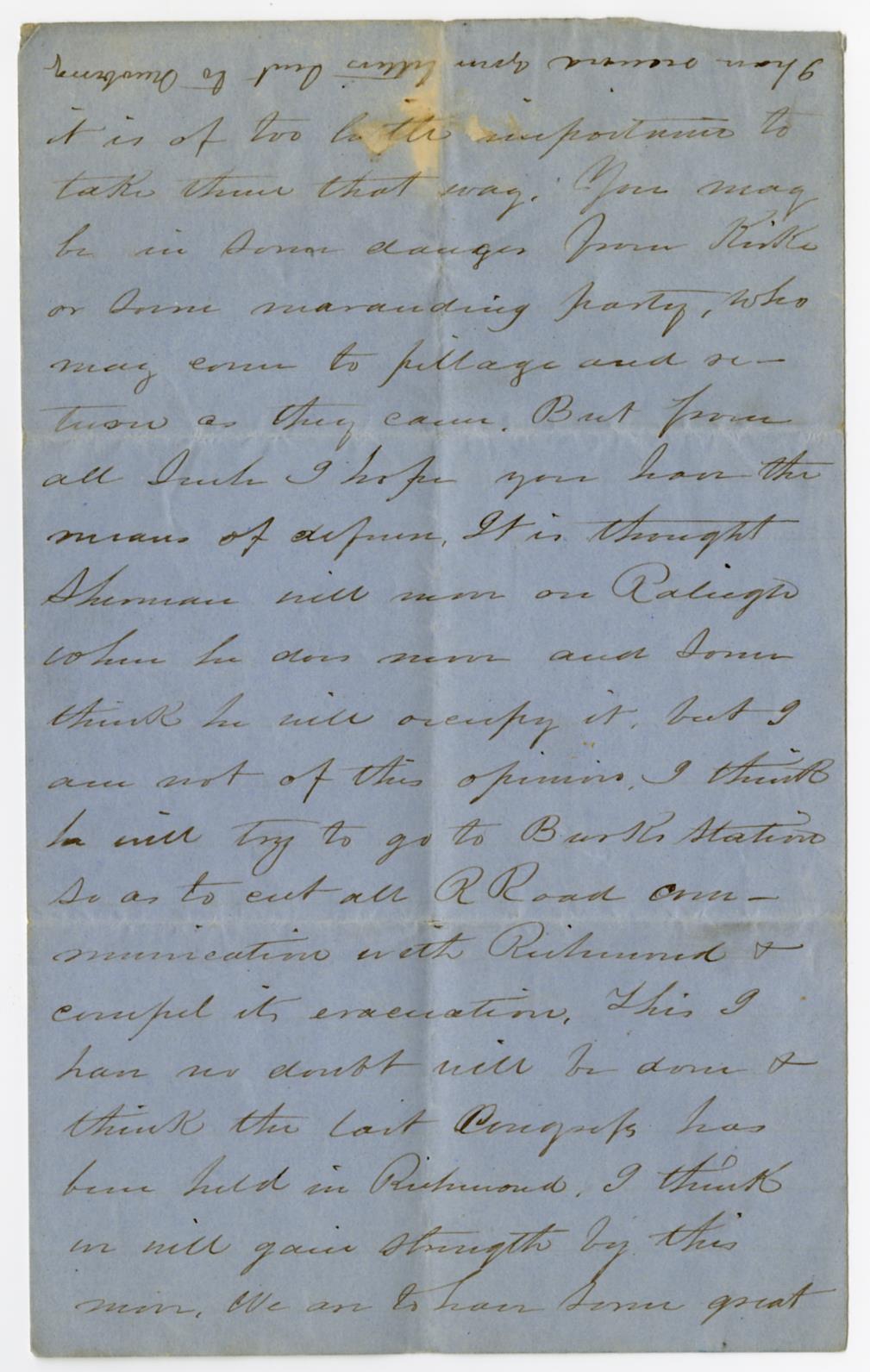 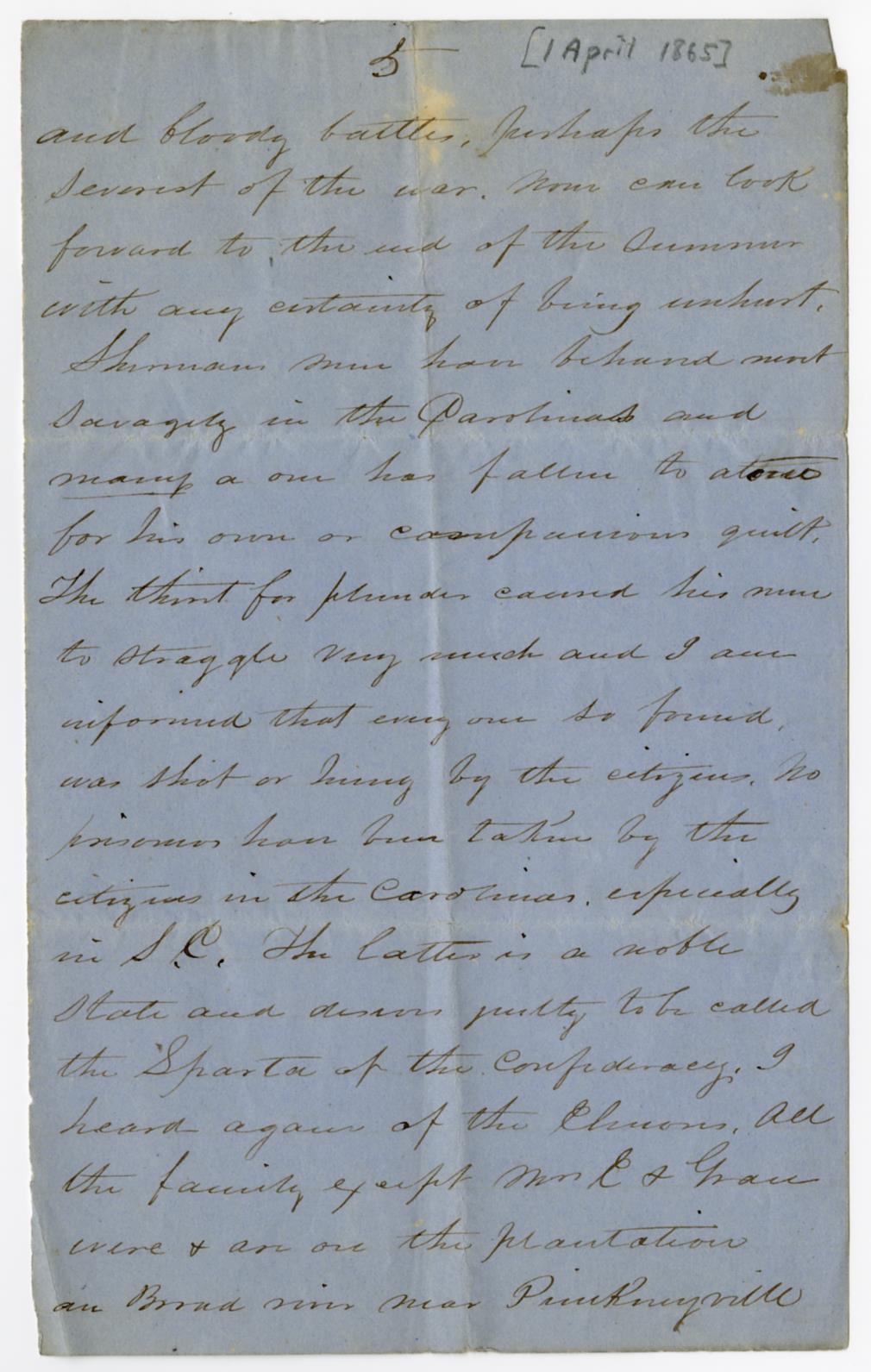 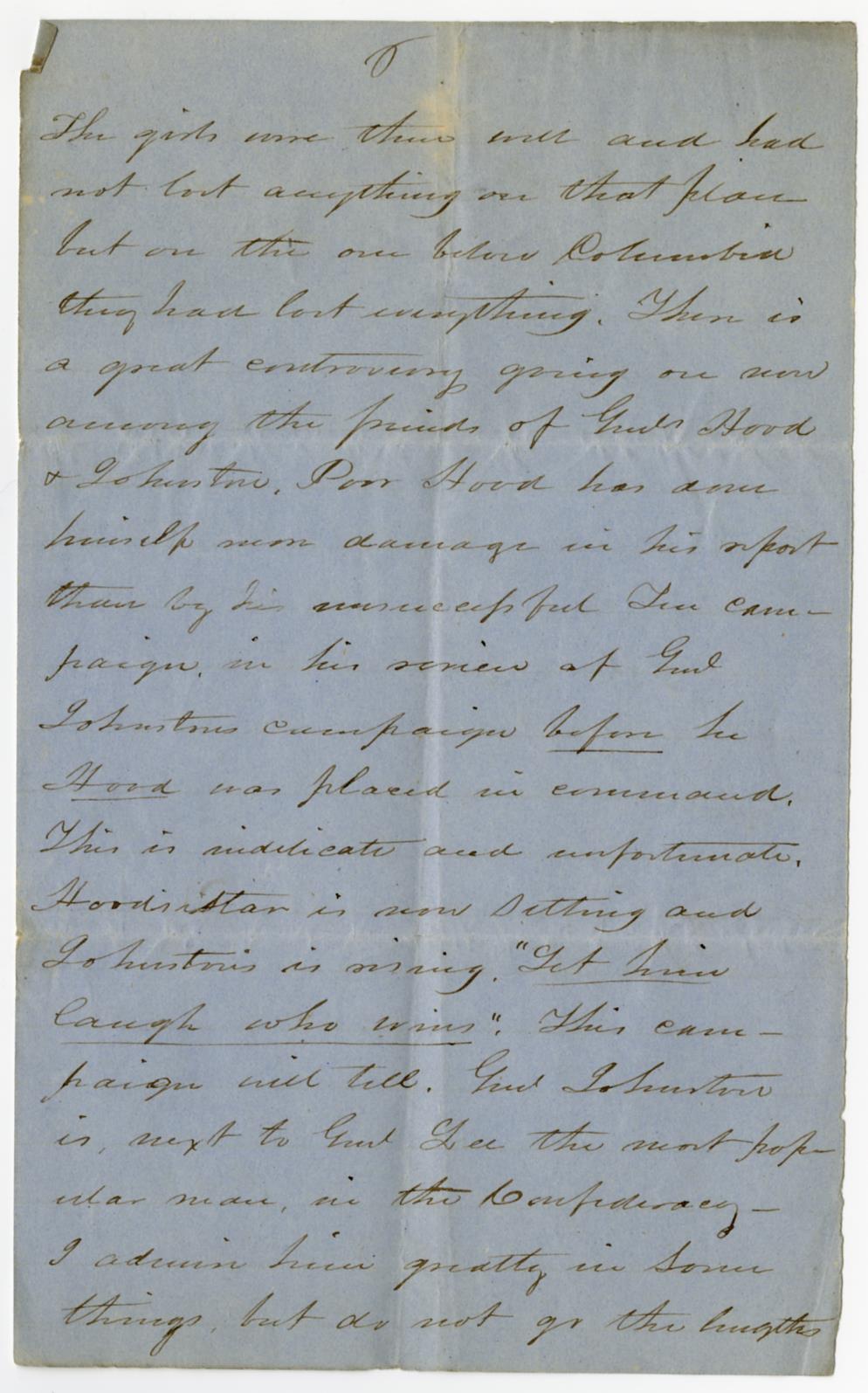 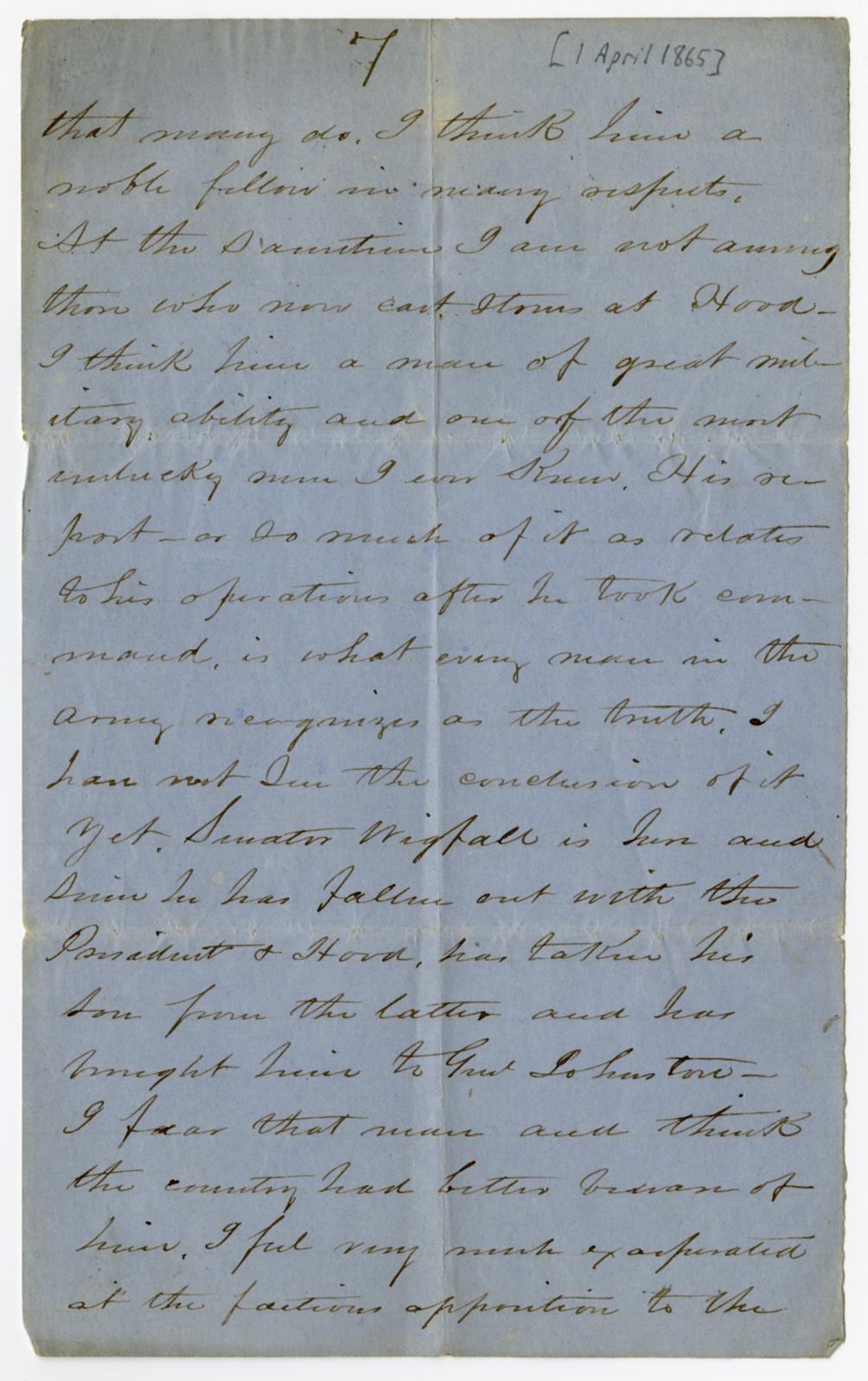 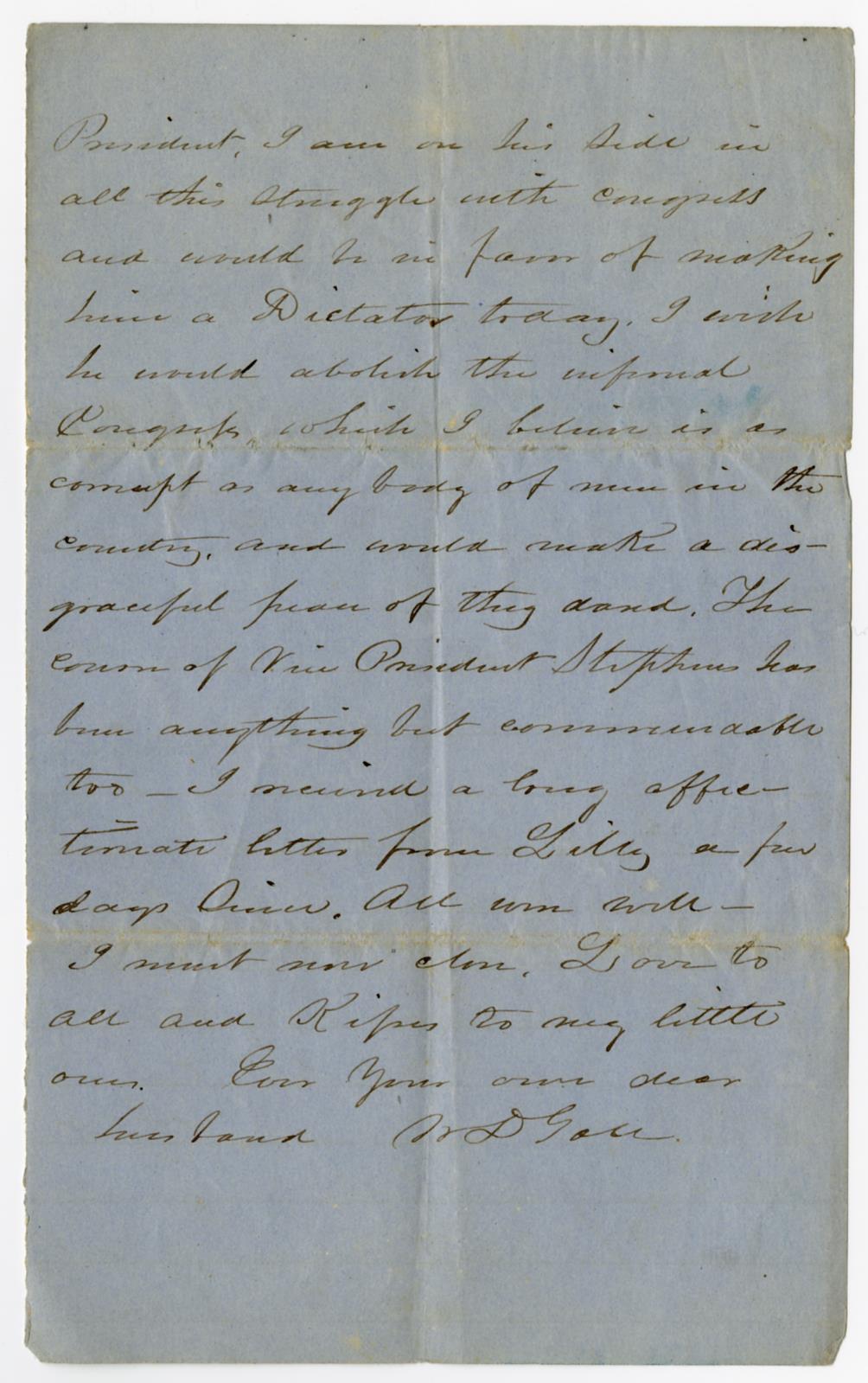 This is our darling little Fannys birth-day and I can do nothing more towards celebrating it than to write to her dear mother and send my love to my pet. I hope your have a nice warm April day when you are as it is with me. For I am sure you will have some sort of entertainment for them. This day 5 year ago. how vividly does it not cling to memory. Yes this day 5 years our first born saw the light of this world. We both know how we hung with anxiety upon the ? of the the first ? to ? whether our darling would live or die. She lived and I hope will live long to glad our eyes and warm our hearts by her ?, her ?, and her loving heart. The ? ? little lady is ever present to me and is as dear as a child can be to a parent. God bless her and keep her always I pray. Give her a good kiss for me as a birthday present tis all I can send her now- We are all trying still now, reorganizing and preparing for the great campaign which is to come off this summer. Genl S D Lee has just arrived with reinforcements and more on the way. Genl G is busy fixing up, for the tremendous struggle we are to have this summer and will do his best but the men are confident and only need numbers. I do not think you need have any fears at any time of an invasion by the Yankees, much less an occupation, as it is not a point of any strategic value to them, an arrogance will be but to accomplish the reduction of Richmond. That is the point of all point, upon which all eyes are turned and all ? are ?. Theirs to accomplish and ours to prevent. Va + N.Carlina are to be the great theaters of blood + carnage this summer, and all other efforts will be but by-play, to serve as diversions, Mobile will be the next place of serious attack. The enemy could gain nothing by holding Asheville and in the grand plan it is of too little importance to take them that way. You may be in some danger from ? or some marauding party, who may come to pillage and ? as they can. But from all luck I hope you have the means of defense. It is thought Sherman will move on Raleigh when he does move and some think he will occupy it but I am not of this opinion. I think he will try to go to Barth Station as as to cut all R Road communication with Richmond + compel its evacuation. This I have no doubt will be done + think the last Congress has been held in Richmond. I think we will gain strength by this move. We are to have some great and bloody battles, perhaps the severest of the war. None can look forward to the end of the summer with any certainty of being unhurt. Sherman ? have behaved most savagely in the ? and many a one has fallen to atone for his own or companions guilt. The thirst for plunder caused his men to straggle very much and I am informed that every one so found was shot or hung by the citizens. No prisoner has been taken by the citizens in the Carolinas especially in S.C. The latter is a noble state and deserves greatly to be called the Sparta of the Confederacy. I heard again of the ?. All the family except Mark + Grace were + are on the plantation on Broad river near Pinkingville (?). The girls were there ? and had not lost accepting on that place but on the one before ? they had lost everything. There is a great controversy going on now ? the ? of Genl Hood + Johnston. Poor Hood has done himself more damage in his report than by his unsuccessful Ten campaign, in his review of Gel Johnstons campaign before he HOod was placed in command. This is indelicate and unfortunate. Hoods Star is now seting and Johnstons is rising. “Let him laugh who wins.” This campaign will tell. Genl Johnston is next to Genl Lee the most popular man, in the Confederacy- I admire him greatly in some things, but do not go the lengths that many do. I think him a noble fellow in many respects. At the sametime I am not among those who now cant ? at Hood. I think him a man of great military ability and one of the most unlucky men I ever knew. HIs report_or so much of it as relates to his operations after he took command is what every man in the army recognizes as the truth. I have not seen the conclusion of it yet. Senator Wigfall is here and since he has fallen out with the President + Hood, has taken his son from the latter and has brought him to Genl Johnston– I fear that man and think the country had better beware of him, I feel very much exasperated at the factions apportion to the President. I am on his side in all this struggle with congress and would be in favor of making him a Dictator today. I wish he would abolish the informal Congress which I believe is as corrupt as any body of men in the country, and would make a disgraceful ? of they ?. The ? of Vice President Stephens has been anything but commendable too__ I received a long affectionate letter from Letty a few days since. All are well– I must now close. Love to all and kisses to my little ones. Ever your own dear husband W D Gale