2 April 1865: “have been serving on guard at town every third night & have been as much as two weeks without taking off my clothes”

Item Description: Letter from J. C. Norwood to Walter Waightstill Lenoir regarding Stoneman’s raids through North Carolina and into Virginia.  He writes about how a detachment of soldiers burned buildings in the town and about rumors where Stoneman and his men will attack next.  He says the people live in a constant of fear of enemy soldiers and bandits. 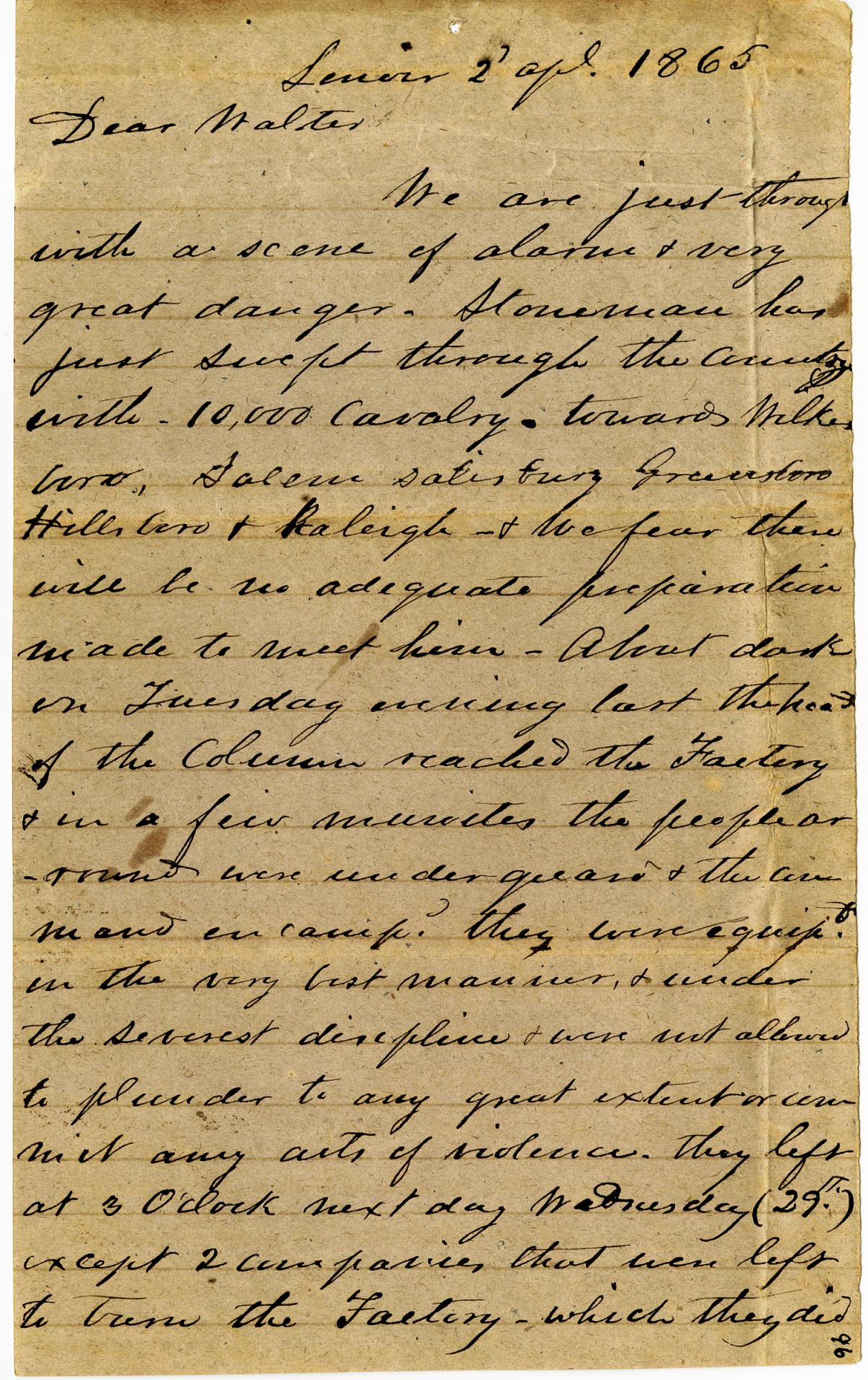 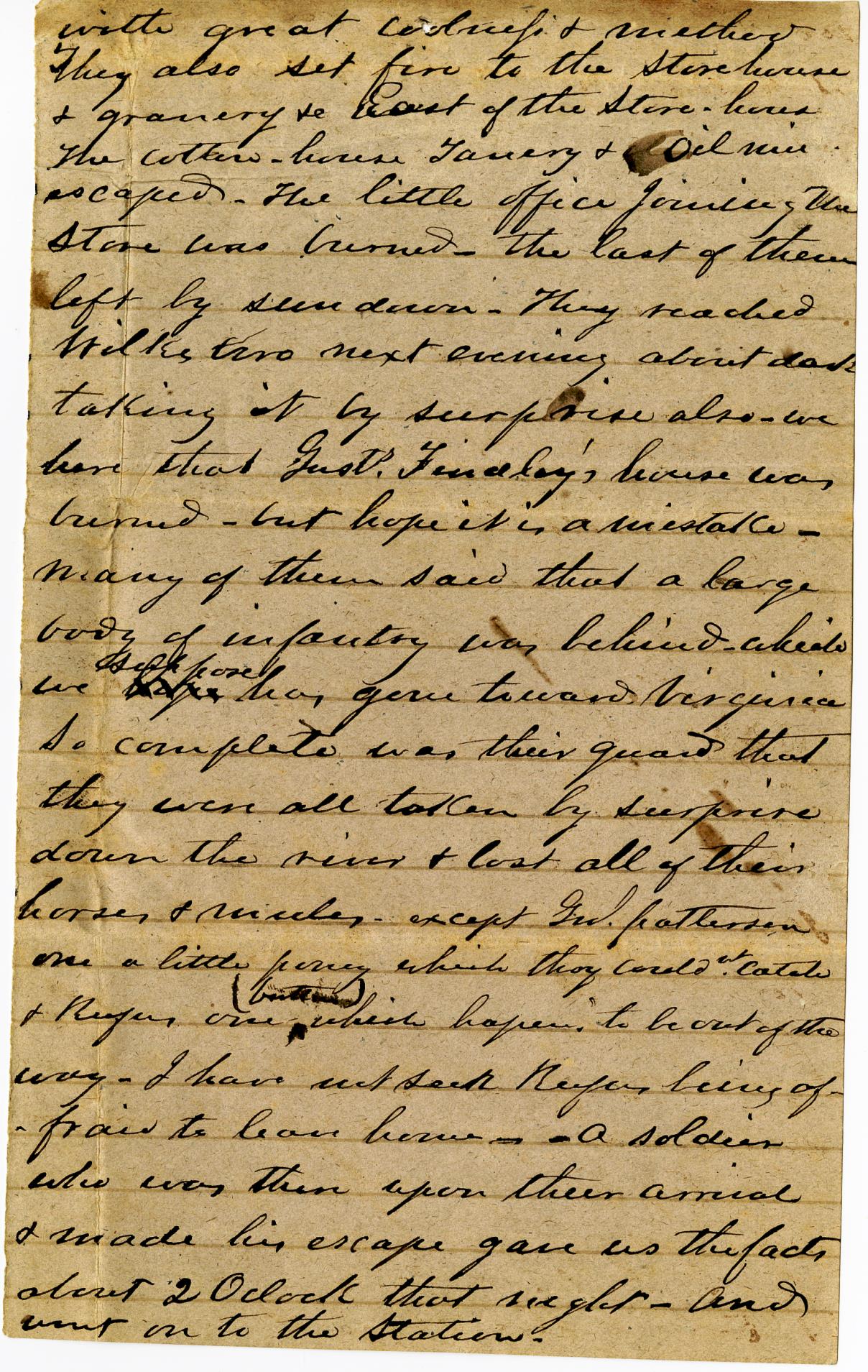 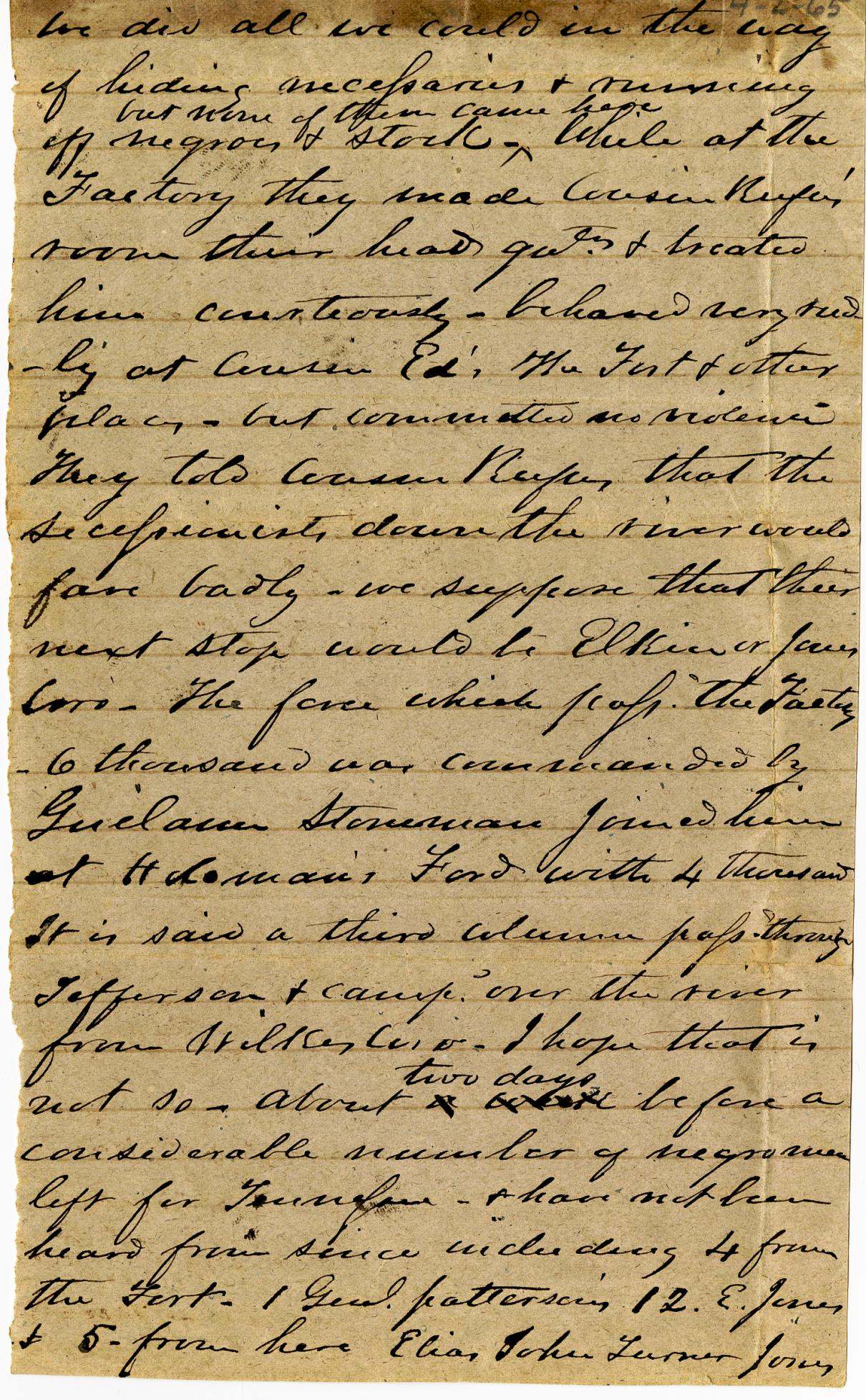 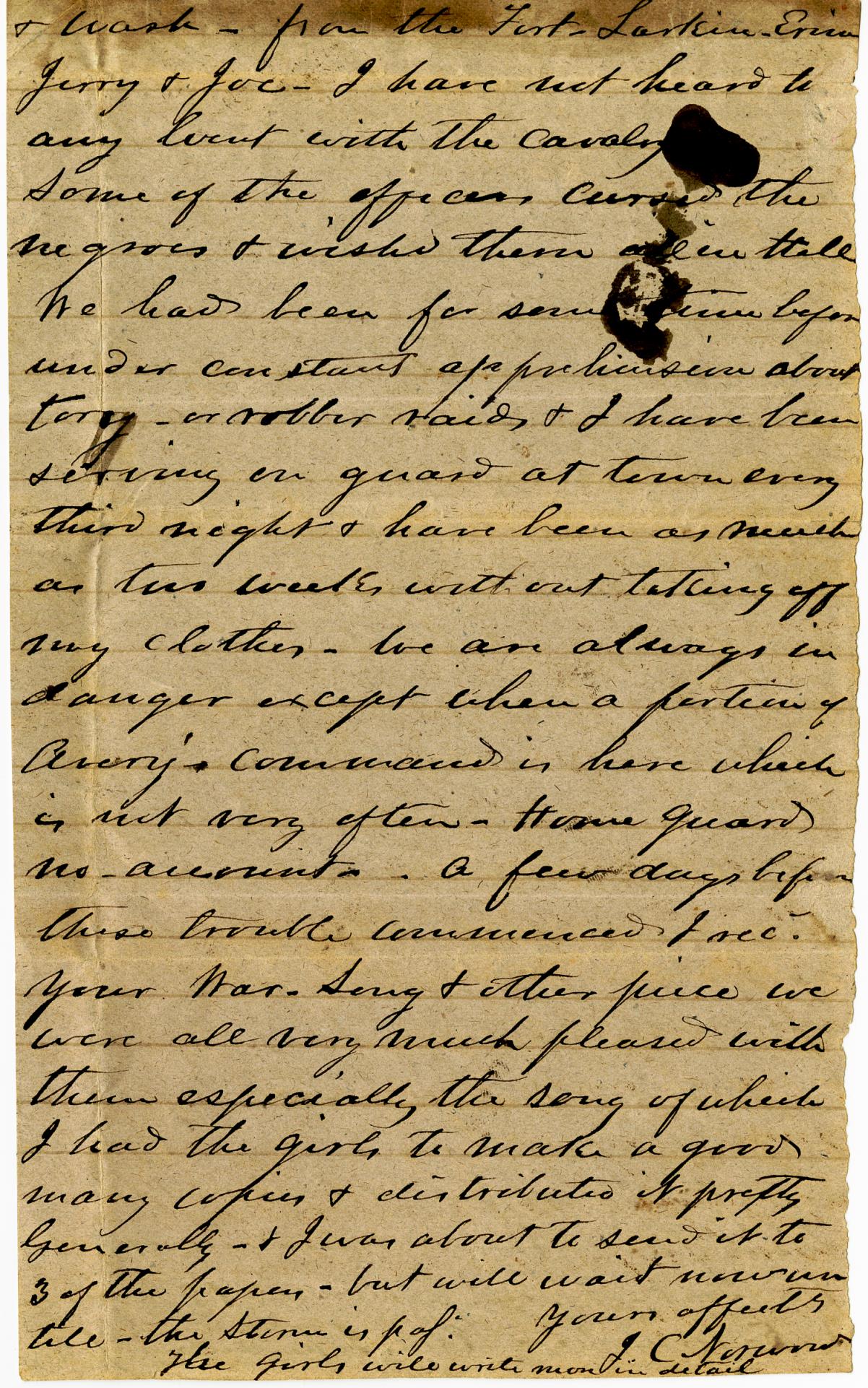 We are just through with a scene of alarm & very great danger. Stoneman has just swept through the country with 10,000 cavalry towards Wilkesboro, Salem Salisbury Greensboro Hillsboro & Raleigh & we fear there will be no adequate preparation made to meet him. About dark on Tuesday evening last the head of the column reached the Factory & in a few munites the people around were under guard & the command en camp? They were equipt in the very best manner & under the severest discipline & were not allowed to plunder to any great extent or commit any acts of violence. They left at 3 o’clock next day Wednesday (29th) except 2 companies that were left to burn the Factory which they did with great coolness & method. They also set fire to the storehouse & granery &c East of the storehouse they cotten-house Tanery & oil mill escaped. The little office joining the store was burned- the last of them left by sundown. They reached Wilkesboro next evening about dark taking it by surprise also we here that Justs. Findley’s house was burned- but we hope it is a mistake- many of them said that a large body of infantry was behind which we suppose has gone toward Virginia so complete was their guard that they were all taken by surprise down the river & lost all of their horses & mules except Gnl Patterson one a little poney which they couldn’t catch & Rufus one (?) which hapend to be out of the way. I have not seen Rufus being affraid to leave home– a soldier who was then upon theer arrival & made his escape gave us the facts about 2 Oclock that night and went on to the station. We did all we could in the way of hiding necessarious & running off negroes & stock but none of them came here. While at the Factory they made Cousin Rufus room their headqat & treated him courteously- behaved very ? at Cousin Ed; the Fest & other place- but committed no violence. They told Cousin Rufus that the secessionists down the river would fare badly- we suppose the their next stop would be Elkin or Jonesboro- The force which pass the Factory 6 thousand war commanded by General Stoneman joined him at Holoman’s Ford with 4 thousand. It is said a third column pass through Jefferson & camp. over the river from Wilkesboro. I hope that is not so- about two days before a considerable number of negromen left for Tennessee & have not been heard from since including 4 from the fort. 1 Genl Patterson 12. E. Jones & 5 from here Elias John Turner Jones & Wash- from the Fort Larkin Erin Jerry & Joe. I have not heard to any event with the Cavalry some of the officers cursed  the negroes & wished them all in Hell. We had been for sometime before under constant apprehension about Tory or robber raids & have been serving on guard at town every third night & have been as much as two weeks without taking off my clothes- we are always in danger except when a portion of Avery’s command is here which is not very often- Home guard no account. a few days before these trouble commenced I rec. your War Song & other piece we were all very much pleased with them especially the song of which I had the girls to make a good many copies & distributed it pretty generally – & I was about to send it to 3 of the papers- but will wait now untill- the storm is pass: Your affecty

The girls will write more in detail