15 April 1865: “Yesterday so beautiful & the air so dry & clear with a Happy President and a happy people- Today a Dead President murdered by a citizen of the United States”

Item Description: April 15th, 1865 diary entry in Henry Clay Warmoth’s Civil War diary.  Warmoth was stationed in Washington D.C. and describes the somber mood in the city after the assassination of Abraham Lincoln.  Henry Clay Warmoth was a lieutenant colonel of the 32nd Missouri Volunteers, assigned to the staff of General John A. McClernand.  He served as Governor of Louisiana from 1868-1872. 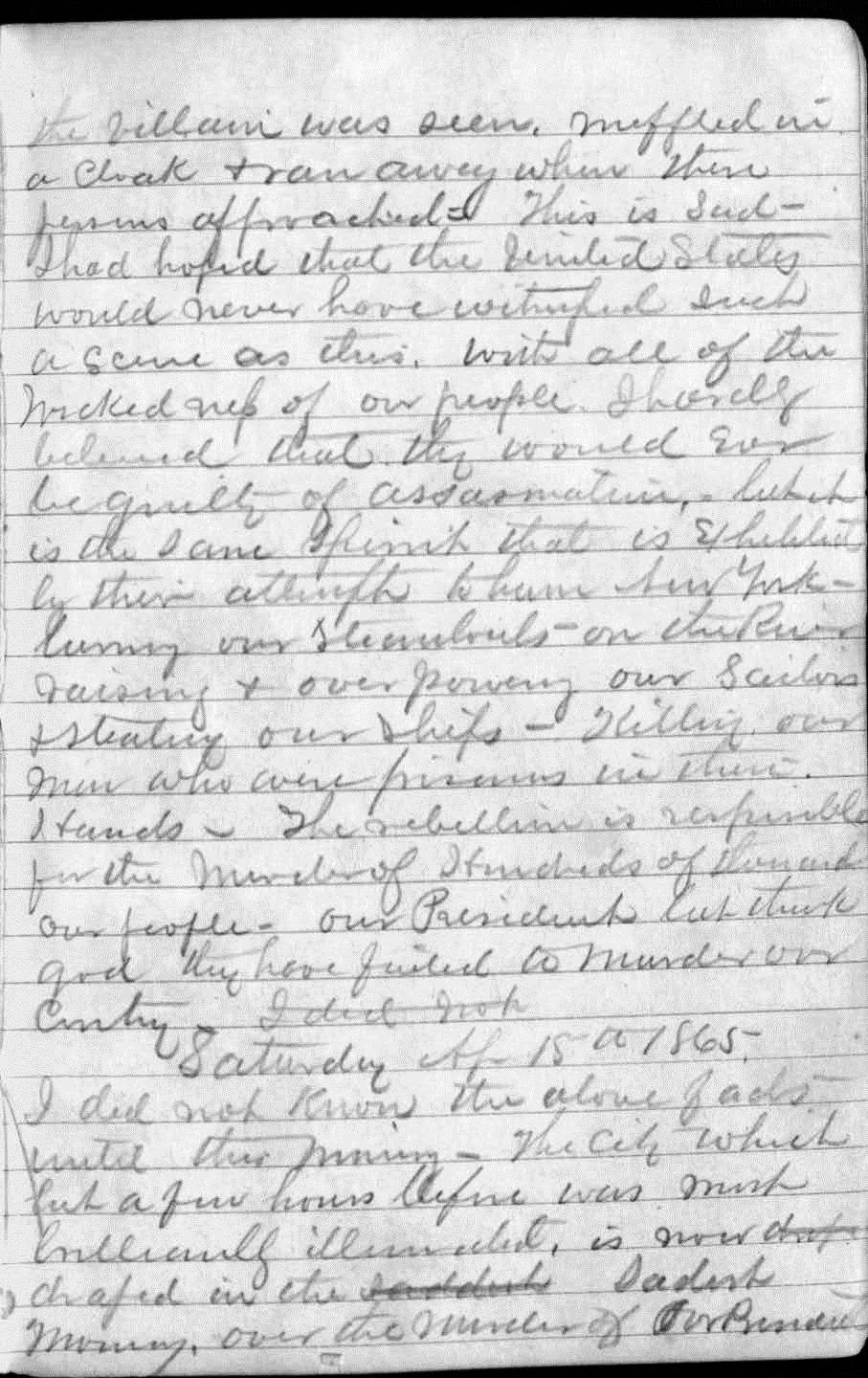 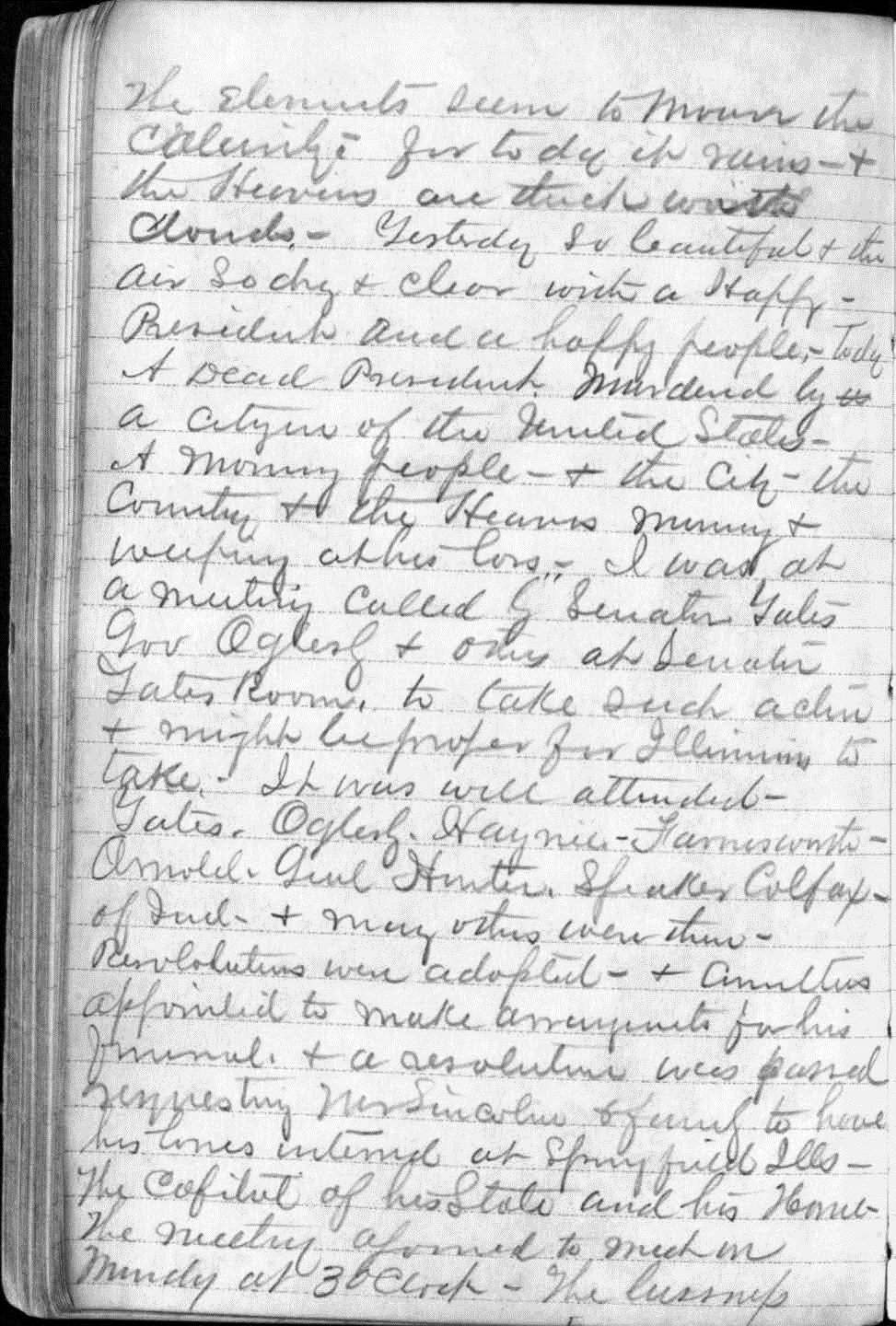 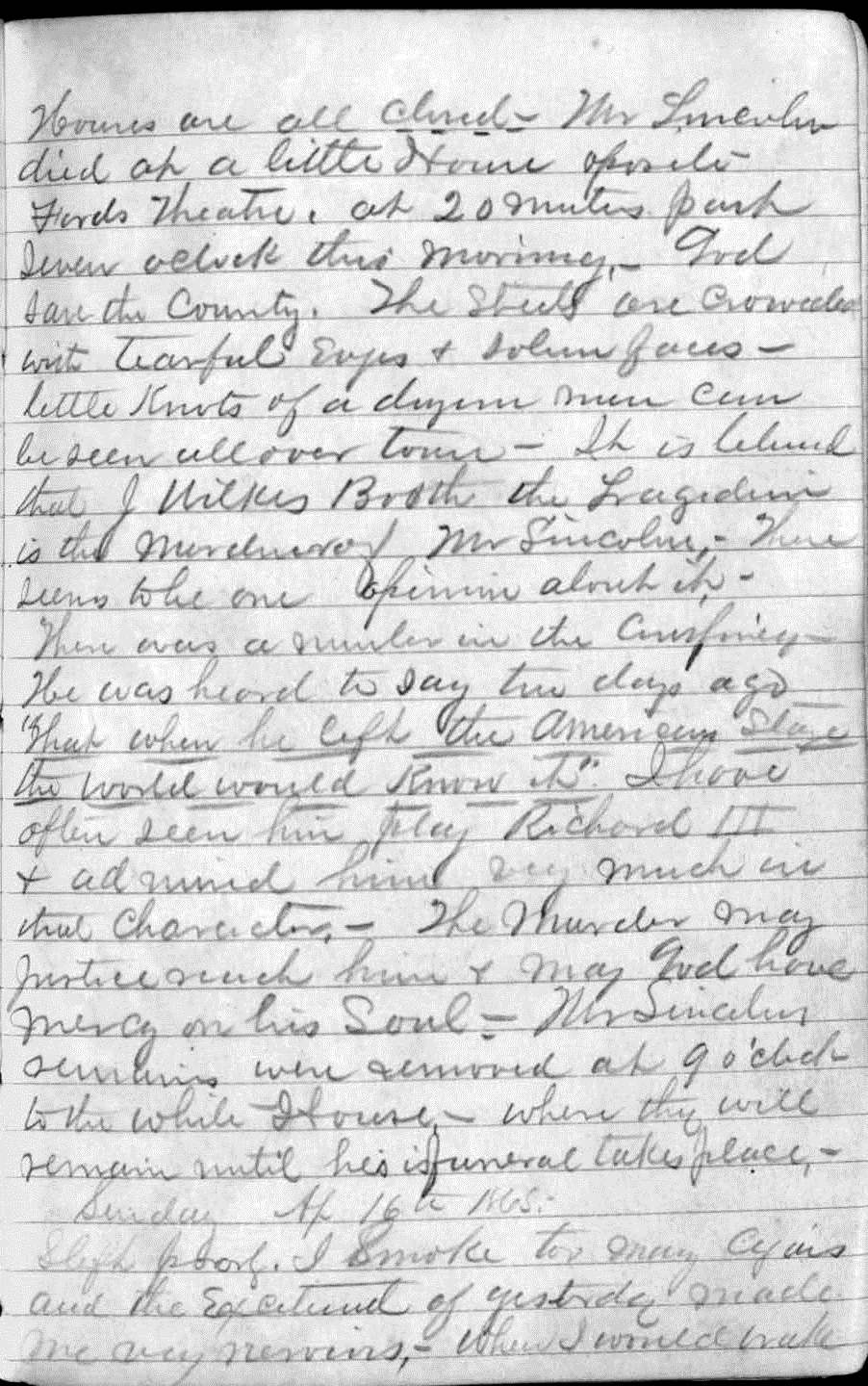 I did not know the above facts until this morning- the city which but a few hours before was most brillianly illuminated, is now draped in the sadest moning, over the murder of our President. The Elements seem to mourn the calamity for today it rains- & the Heavens are thick with clouds- Yesterday so beautiful & the air so dry & clear with a Happy President and a happy people- Today a Dead President murdered by a citizen of the United States- A moning people- & the city- the Country & the Heavens moning & weeping at her lost- I was at a meeting called by Senator Yates, Gov Oglesby & others at Senator Yates Room, to take such action & might be proper for Illinois to take- It was well attended- Yates, Oglesby, Haynie, Faresworth, Arnold, Genl Hunter, Speaker Colfax of Ind. & many others were there- Resolutions were adopted- & ? appointed to make arrangements for his funeral, & a resolution was passed requesting Mr. Lincoln & famly to have his bones internd at Springfield Ills- the capitul of his State and his home- the meeting assumed to meet on Monday at 3 oclock- The business Houses are all closed- Mr Lincoln died at a little Home oposite Fords Theatre, at 20 minutes past seven oclock this morning- God save the country. The streets are crowded with tearful eyes & solem faces- little knots of a dozen men can be seen all over town- It is believed that J Wilkes Booth the Tragedian is the murderer of Mr Lincoln. There seems to be one opinion about it- There was a member in the ?- He was heard to say two days ago “That when he left the American stage the world would know it” I have often seen him play Richard III & admired him very much in that character- The murder may justice reach him & may God have mercy on his soul- Mr Lincoln remains were removed at 9 oclock to the White House- where they will remain until his funeral takes place