17 April 1865: “we were aroused by the report that General Johnson had surrendered his army to Sherman and you can have no idea of the excitement that reigned around the city at the announcement as it is surrounded by our army.”

Item Description: Letter from George Washington Baker to his mother from Raleigh, NC. He writes about General Johnston’s (who he refers to as Johnson) surrender to General Sherman. He talks about the feeling amongst the Union soldiers and in the city. He wishes that he was up north to witness the peace and mentions his hatred for Copperheads. He also mentions the reaction to Lincoln’s death.  George Washington Baker served as a Lieutenant with Company K, 123rd New York Volunteers in the Civil War. 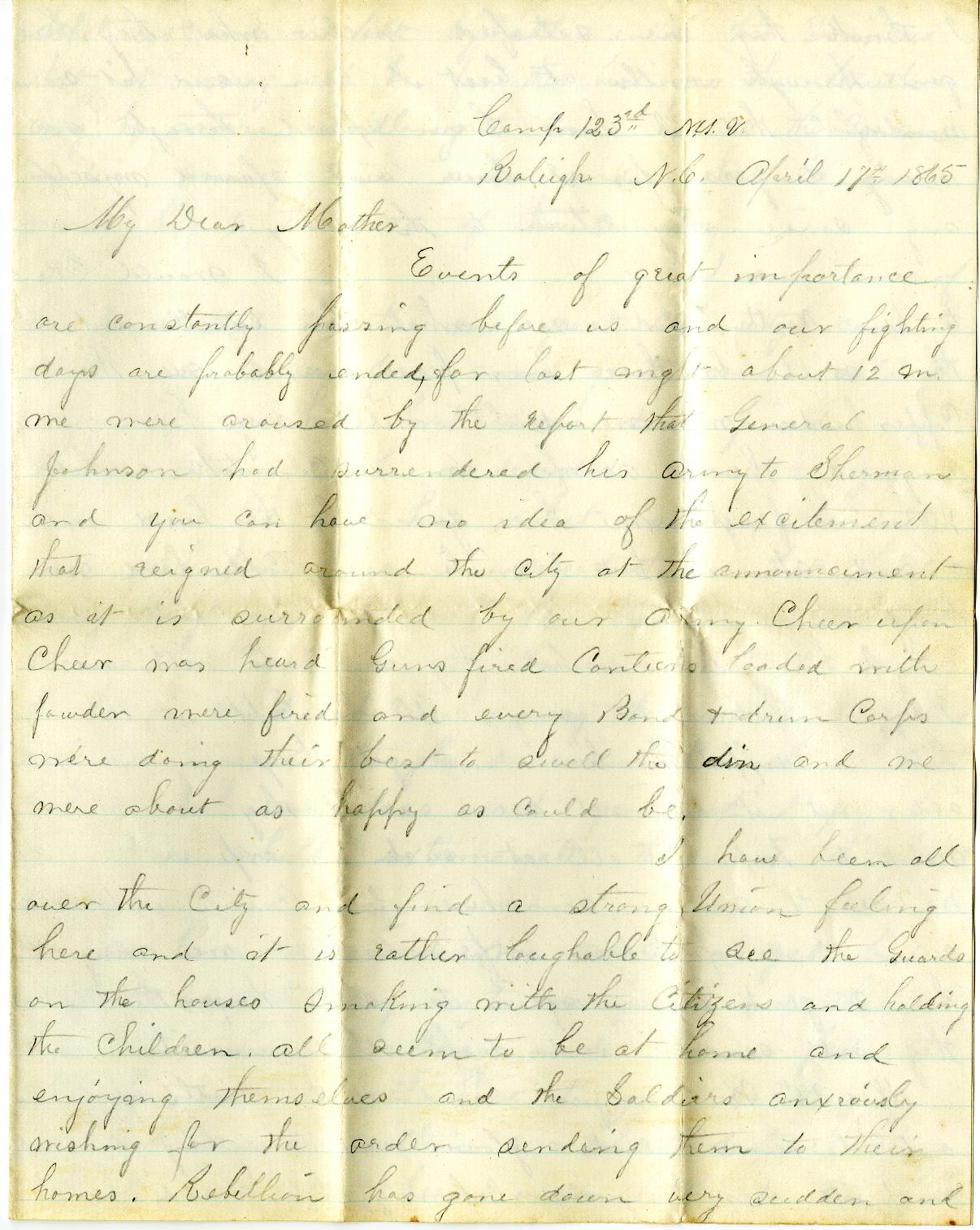 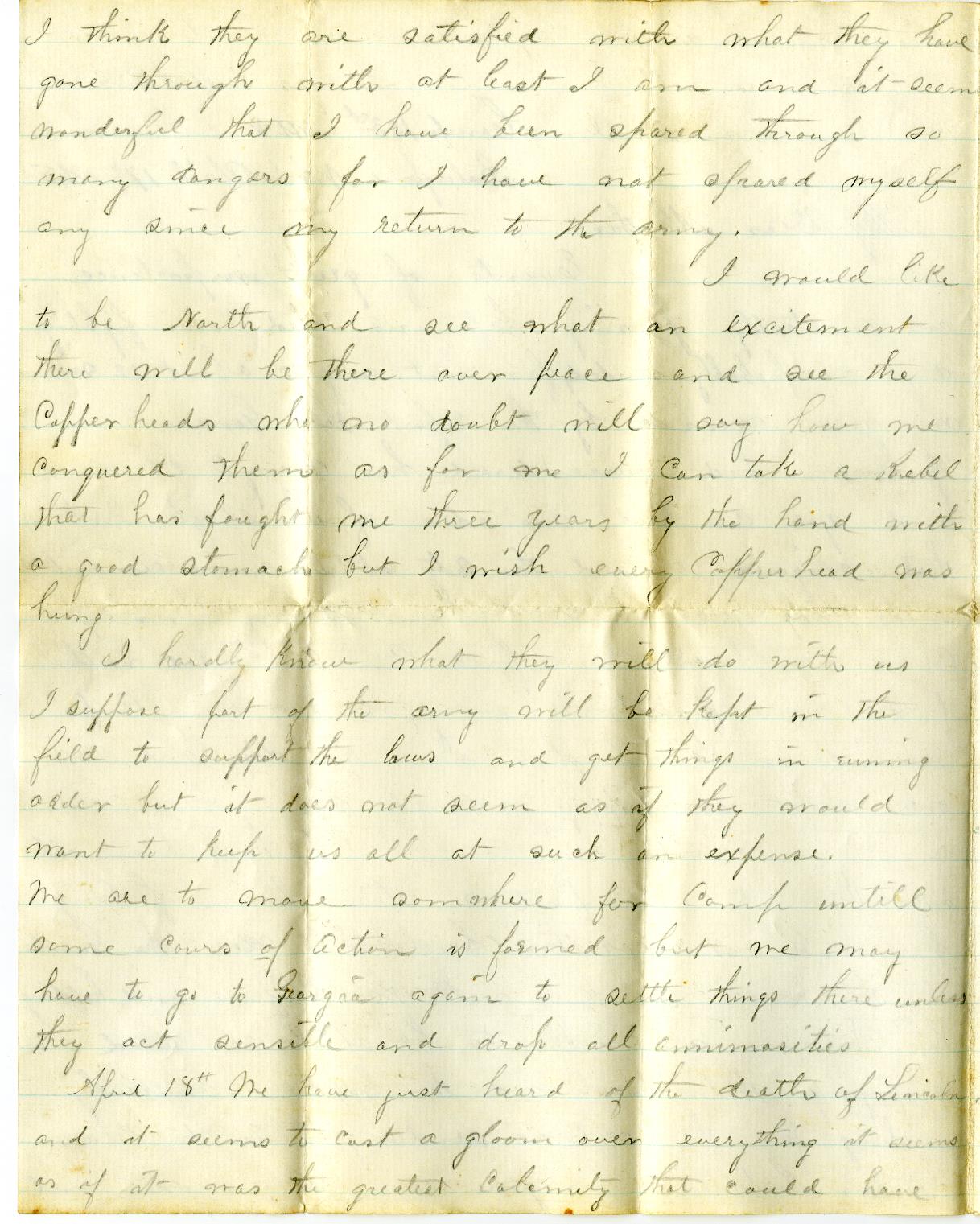 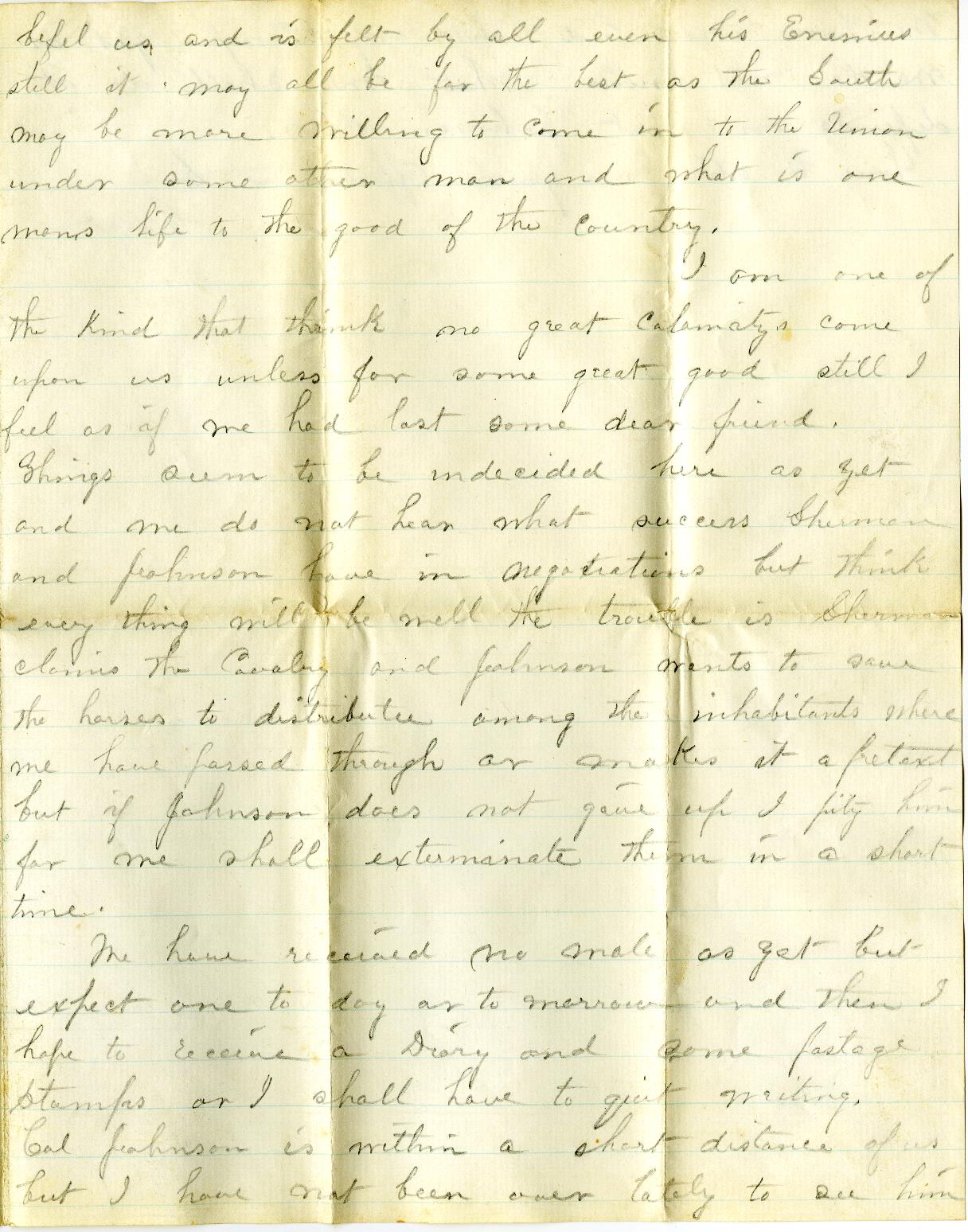 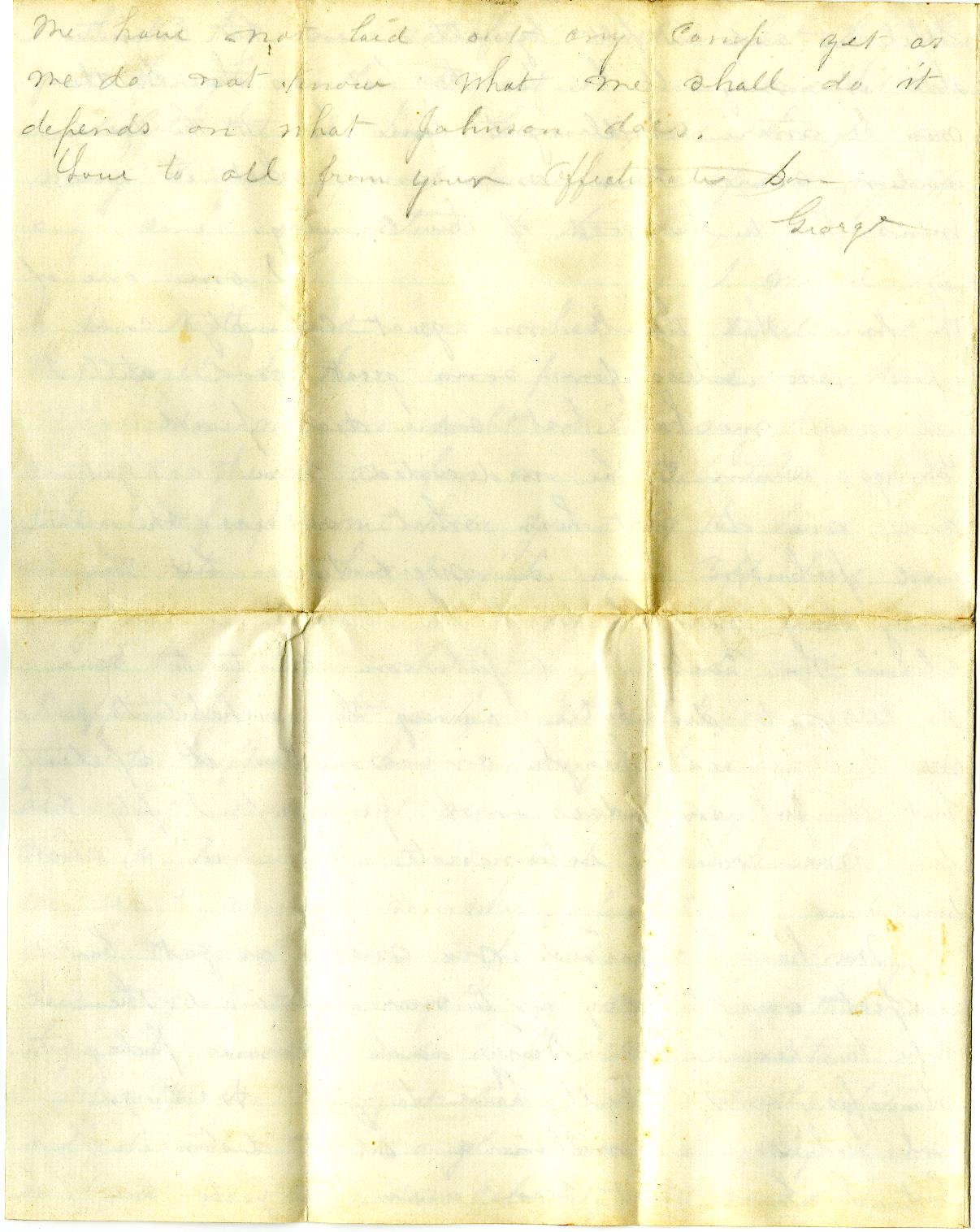 Events of great importance are constantly passing before us and our fighting days are probably ended, for last night about 12 am, we were aroused by the report that General Johnson had surrendered his army to Sherman and you can have no idea of the excitement that reigned around the city at the announcement as it is surrounded by our army. Cheer upon cheer was heard Guns fired contiens loaded with powder were fired and every Band & drum corps were doing their best to swell the din and we were about as happy as could be.

I have been all over the City and find a strong Union feeling here and it is rather laughable to see the Guards on the houses smoking with the citizens and holding the children, all seem to be at home and enjoying themselves and the soldiers anxiously wishing for the order sending them to their homes. Rebellion has gone down very sudden and I think they are satisfied with what they have gone through with at least I am and an it seems wonderful that I have been spared through so many dangers for I have not spared myself any since my return to the army.

I would like to be North and see what an excitement there will be there over peace and see the Copperheads who no doubt will say how we conquered them as for me I can take a Rebel that has fought me three years by the hand with a good stomach but I wish every Copperhead was hung.

I hardly know what they will do with us I supposed part of the army will be kept in the field to support the laws and get thing in running order but it does not seem as if they would want to keep us all at such an expense. We are to move somwhere for camp untill some cours of action is formed but we may have to go to Georgia again to settle things there unless they act sensible and drop all ?.

April 18th We just heard of the death of Lincoln and it seems to cast a gloom over everything it seems as if it was the great calamity that could have befel us and it felt by all even his Enemies still it may all be for the best as the South may be more willing to come in to the Union under some other man and what is one mans life to the good of the country.

I am one of the kind that think one great calamity come upon us unless for some great good still I feel as if we had lost some dear friend. Things seem to be undecided here as yet and we do not hear what success Sherman and Johnson have in negotiations but think everything will be well the trouble is Sherman claims the Cavalry and Johnson wants to save the horses to distribute among the inhabitants where we have passed through or makes it a pretext but if Johnson does not give up I pity him for we shall exterminate them in a short time.

We have received no male as yet but expect one to day or tomorrow and and then I hope to receive a Diary and some postage stamps or I shall have to quit waiting. Col Johnson is within a short distance of us but I have not been over lately to see him. We have not laid out any camp yet as we do not know what we shall do it depends on what Johnson does.

Love to all from your affectionate son