19 April 1865: “By accepting the terms proposed, you will preserve Western Louisiana and Texas from the devastation and misery which have been the lot of nearly every Southern State”

Item Description: This is a copy of an official communication regarding negotiations between Grant and General Lee to the confederate army in Missouri. The communication asks for surrender to the terms made by the representing U.S. military official. 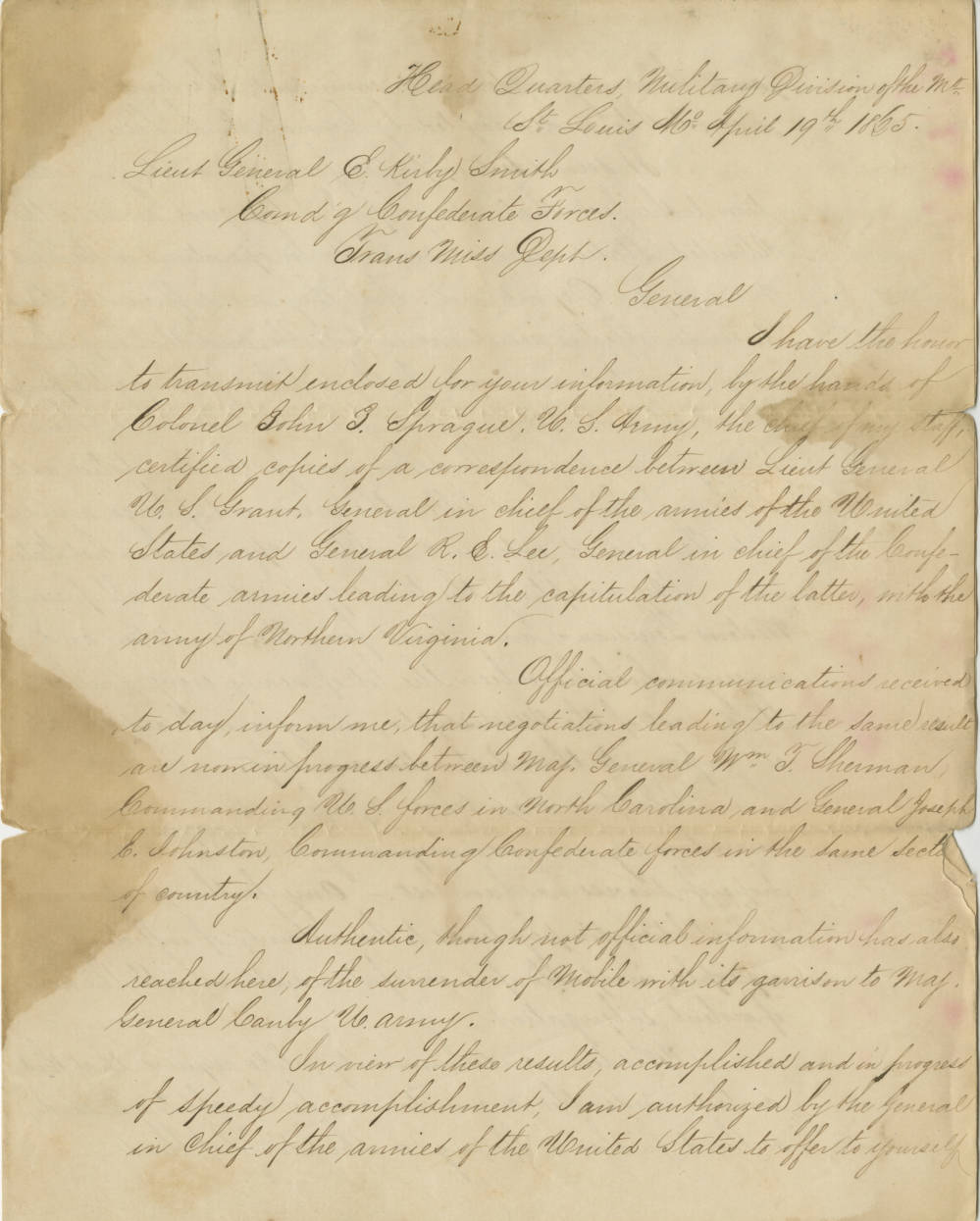 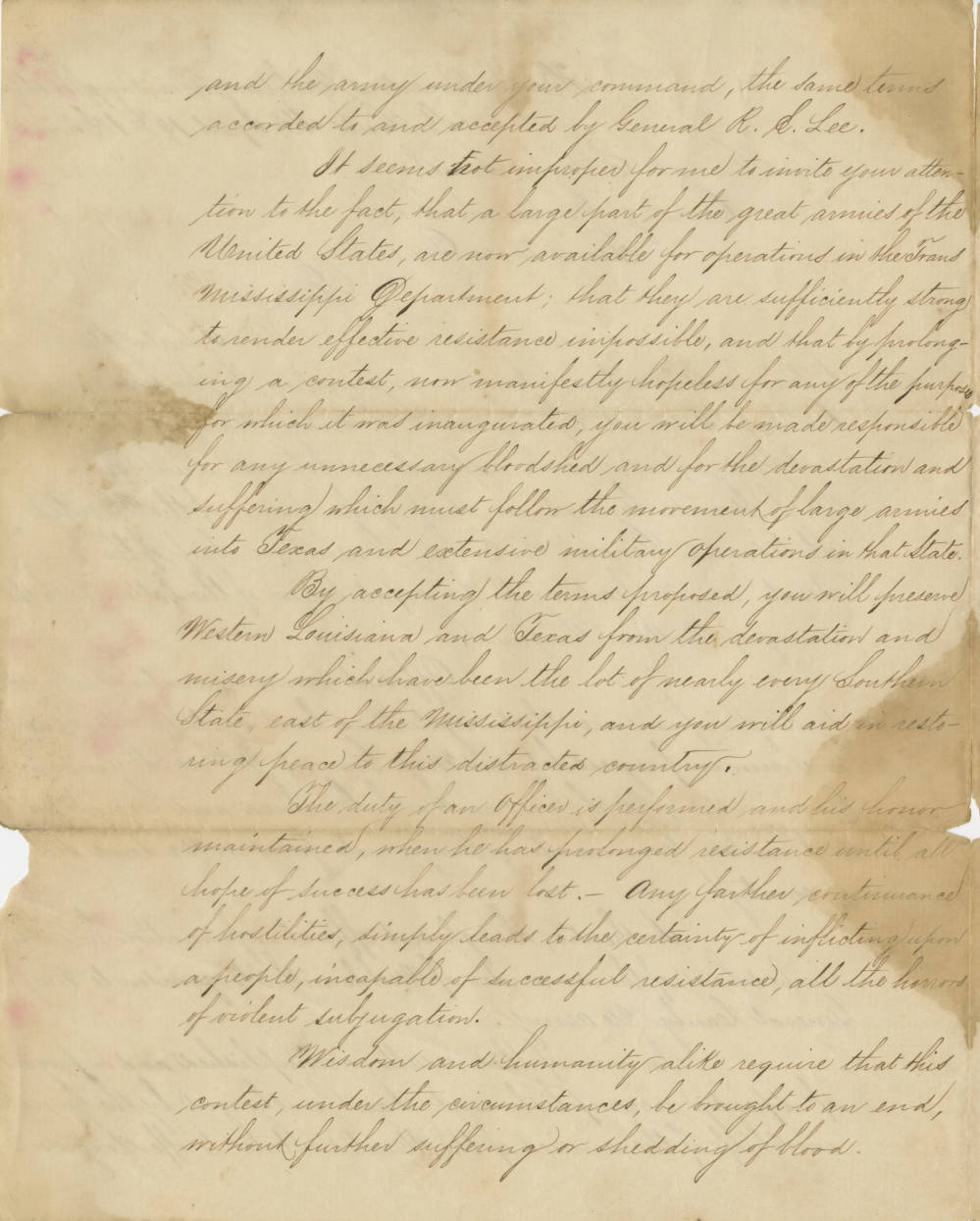 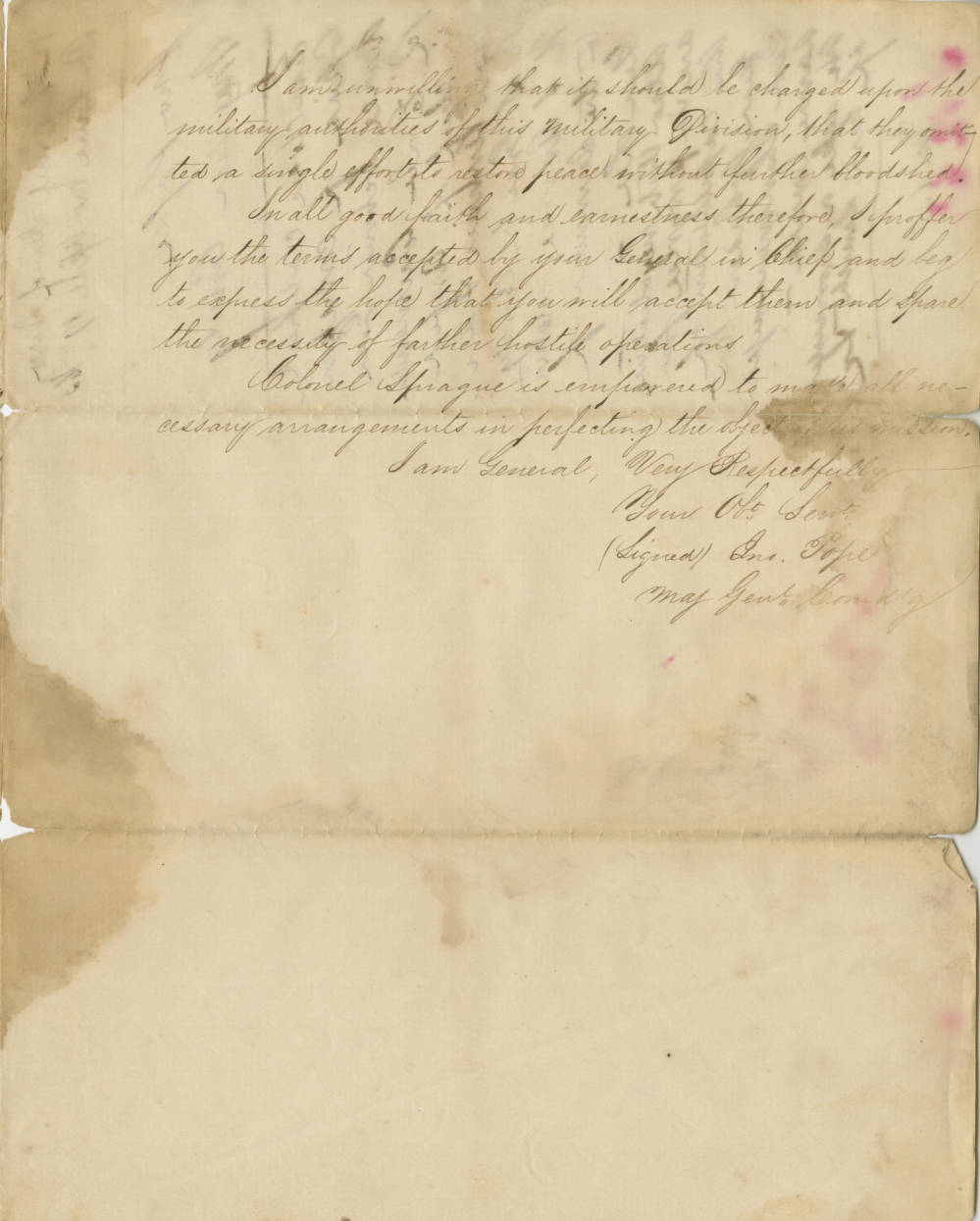 I have the honor to transmit enclosed for your information by the hands of Colonel John B Sprague. U.S. Army, the chief of my staff, certified copies of a correspondence between Lieut. Genererl U. S. Grant, General in chief of the United States and General R. E. Lee, General in chief of the Confederate armies leading to the capitulation of the latter, with army of Northern Virginia.

Official communications received today inform me, that negotiations leading to the same result are now in progress between Maj. General Wm T. Sherman Commanding U. S. forces in North Carolina and General Joseph E. Johnston, Commanding Confederate forces in the same section of the country.

Authentic, though no official information has also reached here, of the surrender of Mobile with its garrison to Maj. General Canby U. Army.

In view of these results, accomplished and in progress of speedy accomplishment, I am authorized by the General in Chief of the armies of the United States to offer to yourself and the army under your command, the same terms accorded to and accepted by General R. E. Lee.

It seems not improper for me to invite your attention to the fact, that a large part of the great armies of the United States, are now available for operations in the Trans Mississippi Department; that they are sufficiently strong to render effective resistance impossible, and that by prolonging a contest, now manifestly hopeless for any of the purposes for which it was inaugurated, you will be made responsible for any unnecessary bloodshed and for the devastation and suffering which must follow the movement of large armies into Texas and extensive military operation in that State.

By accepting the terms proposed, you will preserve Western Louisiana and Texas from the devastation and misery which have been the lot of nearly every Southern State, east of the Mississippi, and you will aid in restoring peace to this distracted country.

The duty of an officer is performed and his honor maintained, when he has prolonged resistance until all hope of success has been lost. Any farther continuance of hostilities, simply leads to the certainty of inflicting upon a people, incapable of successful resistance, all the honors of violent subjugation.

Wisdom and humanity alike require that this contest, under the circumstances, be brought to an end, without further suffering or shedding of blood.

I am unwilling that it should be charged upon military authorities of this military Division that they omit too a single effort to restore peace without further bloodshed.

In all good faith and earnestness therefore, I proffer you the terms accepted by your General in Chief and beg to express the hope that you will accept them and spare the necessity of farther hostile operations.

Colonel Sprague is empowered to make all necessary arrangements in perfecting the object of his mission.