Posted on 20 Apr ’15 by Rebecca Williams

Item Description: Diary entry dated 20 April by Emma LeConte. LeConte lived in Columbia, South Carolina and was the daughter of the scientist Joseph LeConte. She expresses her anguish over the defeat of the Confederate Army. 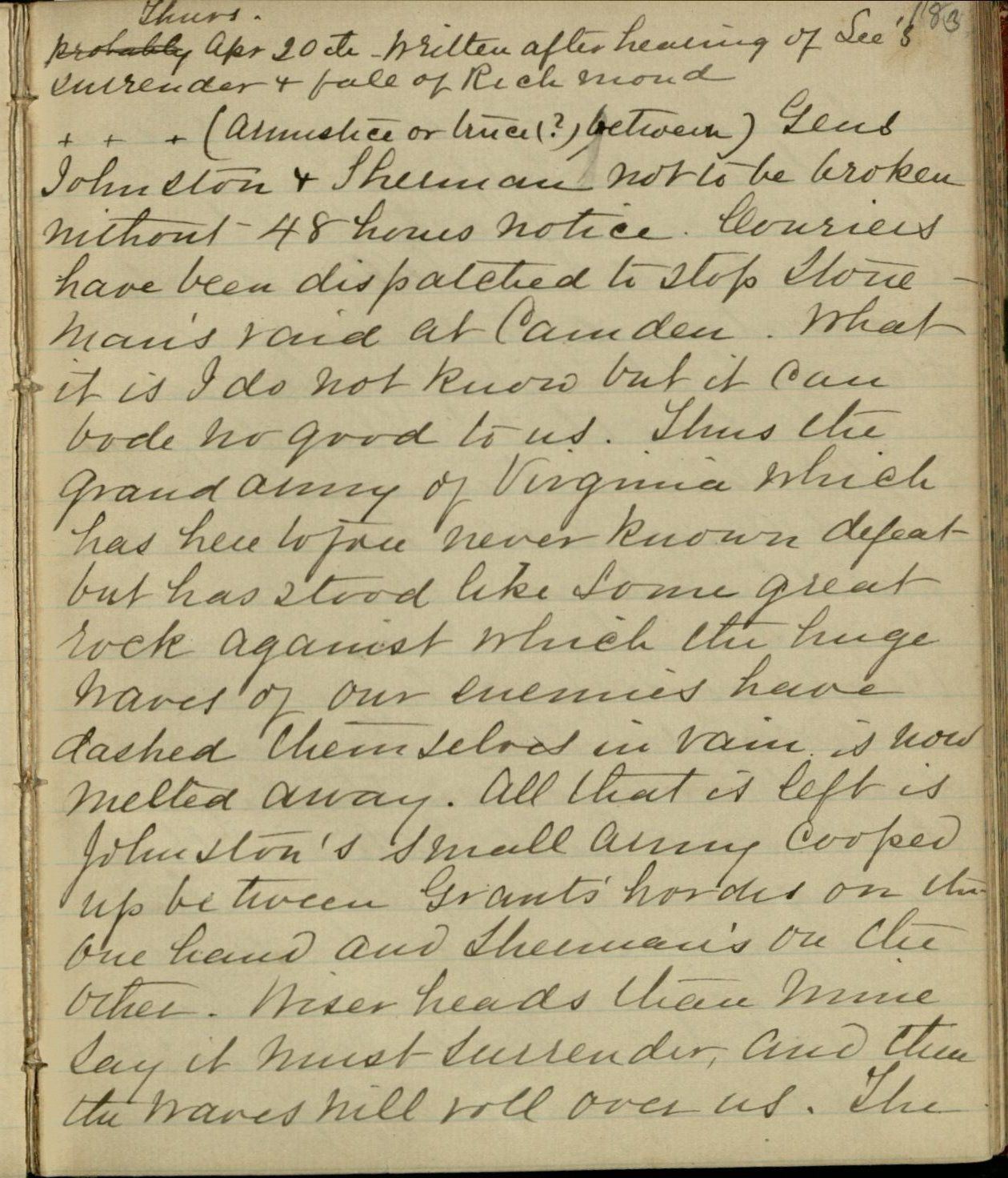 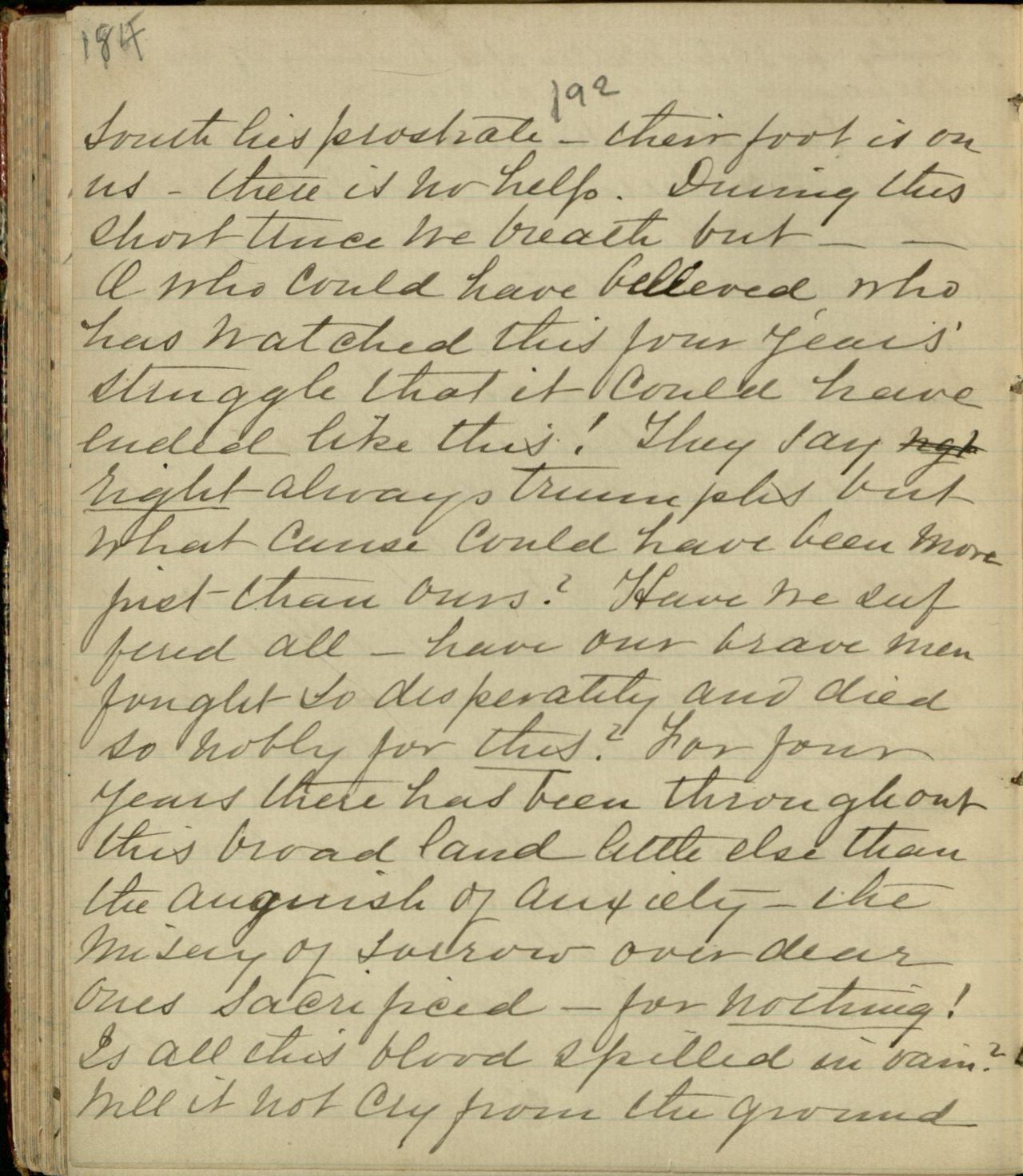 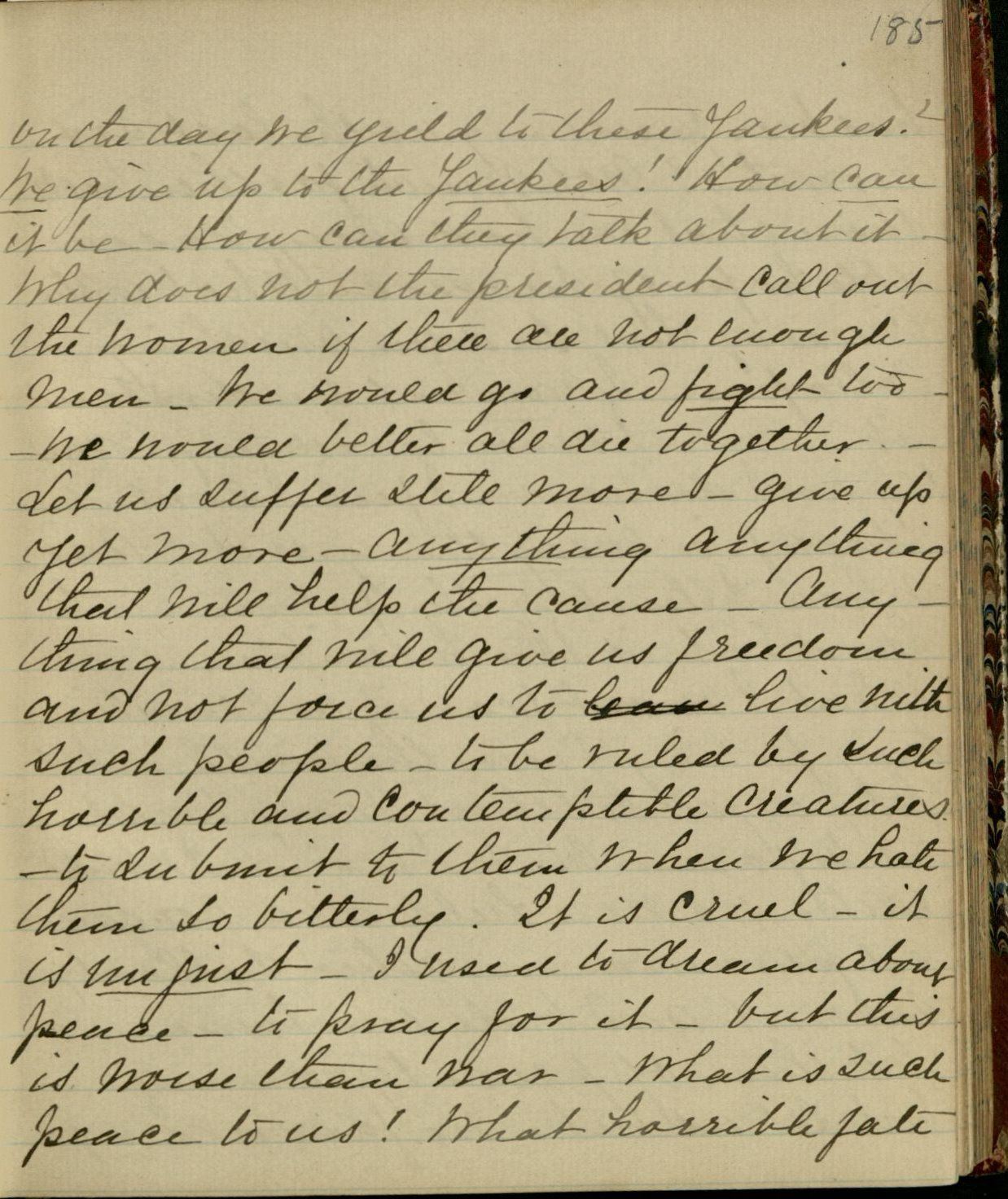 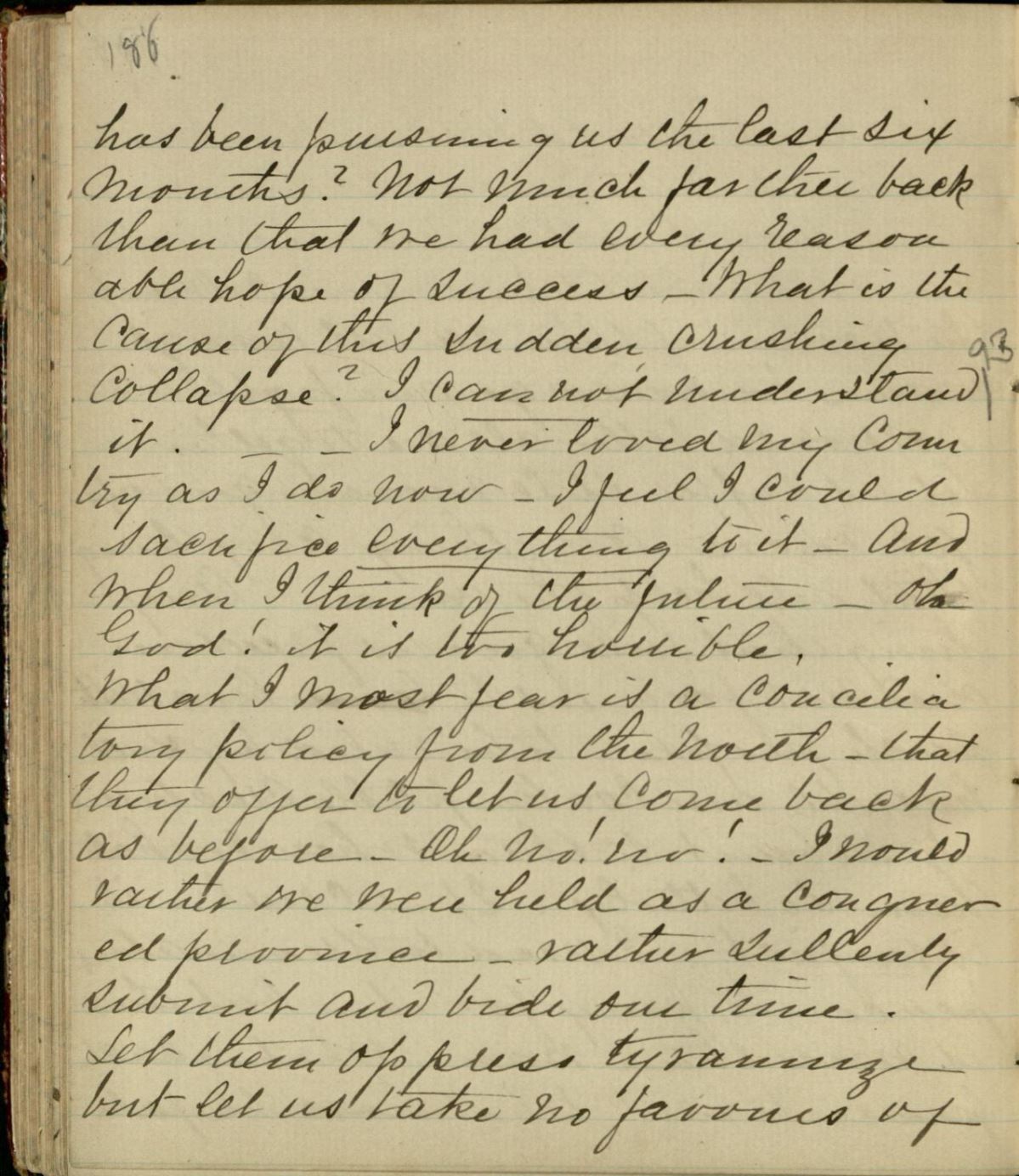 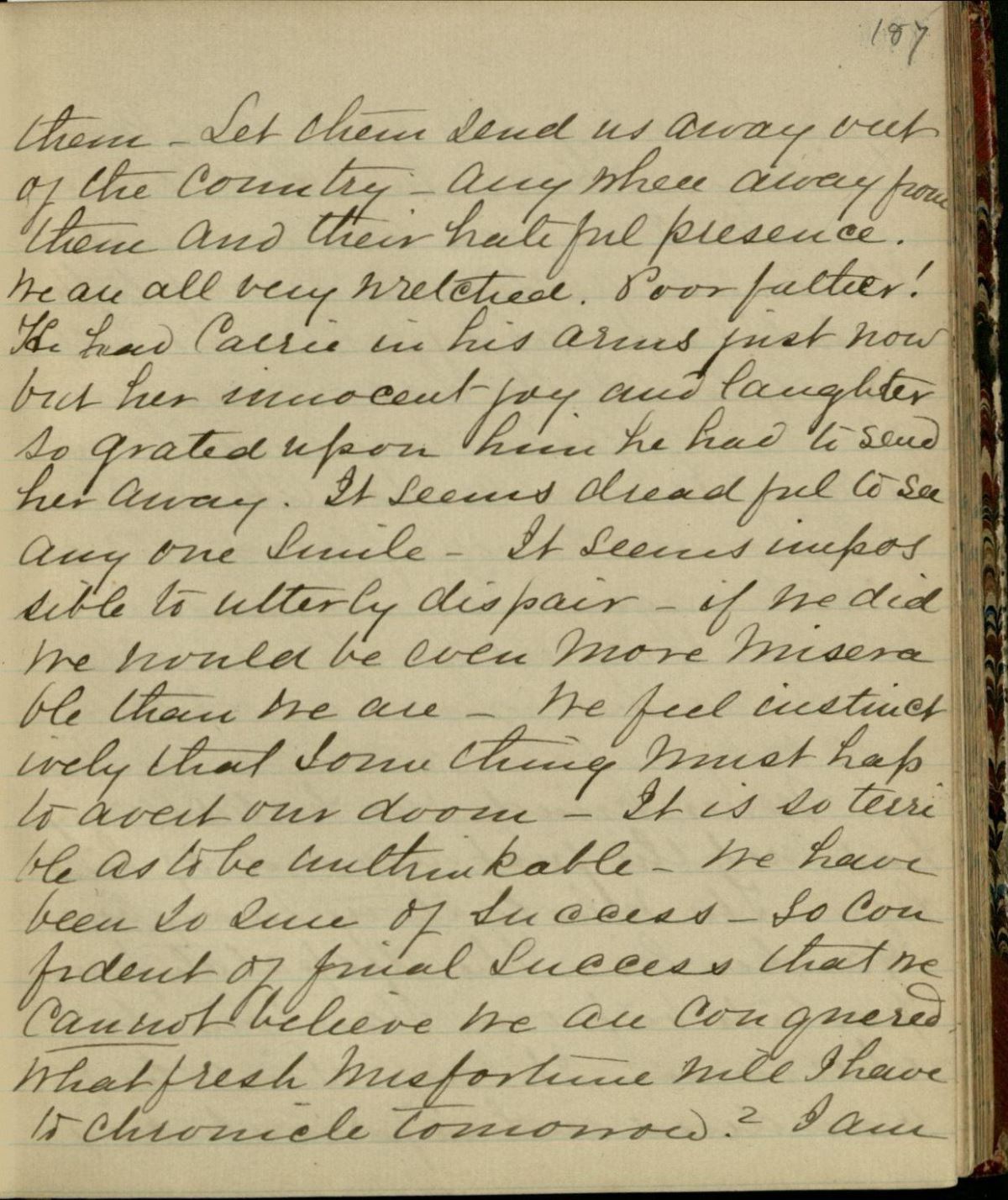 [ca. April 20th.]
*** (armistice or truce (?) between) Generals Johnston and Sherman not to be broken without 40 hours notice. Couriers have been despatched to stop Stoneman’s raid at Camden. What it is I do not know, but it can bode no good to us. This the Grand Army of Virginia which has heretofore never known defeat, but has stood like some great rock against which the huge waves of our enemies have dashed themselves in vain, is now melted away. All that is left is Johnston’s small army, cooped up between Grant’s hordes on the one hand and Sherman’s on the other. Wiser heads than mine say it must surrender, and then the waves will roll over us. The South lies prostrate – their foot is on us – there is no help. During this short time we breathe, but – O who could have believed who has watched this four years’ struggle that it could have ended like this! They say right always triumphs, but what cause could have been more just than ours? Have we suffered all – have our brave men fought so desperately and died so nobly for this? For four years there has been throughout this broad land little else than the anguish of anxiety – the misery of sorrow over dear ones sacrificed – for nothing! Is all this blood spilled in vain – will it not cry from the ground on the day we yield to these Yankees! We give up to the Yankees! How can it be? How can they talk about it?

Why does not the President call out the women? If there are enough men? We would go and fight too – we would better all die together. Let us suffer still more – give up yet more – anything, anything that will help the cause – anything that will give us freedom and not force us to live with such people – to be ruled by such horrible and contempible creatures – to submit to them when we hate them so bitterly. It is cruel – it is unjust. I used to dream about peace – to pray for it – but this is worse than war. What is such peace to us? What horrible fate has been pursuing us the last six months? Not much farther back than that we had every reason to hope for success. What is the cause of this sudden crushing collapse? I cannot understand it – I never loved my country as I do now – I feel I could sacrifice everything to it – and when I think of the future – Oh God! It is too horrible. What I most fear is a cancilistory policy from the North – that they will offer to let us come back as before – Oh, no – no! I would rather we were held as a conquered province – rather sullenly submit and bide our time. Let them oppress and tyrannize, but let us take no favors of them. Let them send us away out of the country – anywhere away from them and their hateful presence. We are all very wretched. Poor father! he had Carrie in his arms just now, but her innocent joy and laughter so grated upon him that he had to send her away. It seems dreadful to see any one smile. It seems impossible to utterly despair. If we did we would be even more miserable than we are. We feel instinctively that something must happen to avert our doom. It is so terrible as to be unthinkable. We have been so confident of final success that we cannot believe we are conquered. What misfortune will I have to chronicle tomorrow I am too sick at heart to write any more.