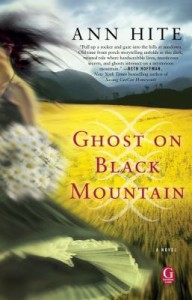 Nellie Clay falls hard for winter-eyed, curly-haired Hobbs Pritchard. In no time at all they are married, paying no heed to Nellie’s mama, who warns that she sees death in her tea leaves. It’s 1939, and despite the Depression that the country is in,  it’s the modern world. Who believes in ghosts and hoodoo? Hobbs brings Nellie home to Black Mountain, a very different world than the one Nellie grew up in near Asheville. For a time, she’s happy, despite their neighbors’ coldness and the strange rumors she keeps hearing regarding her husband. But slowly she discovers that Hobbs Pritchard isn’t the man she thought he was, and she begins to dread hearing his tires on the gravel outside.

And she begins seeing people. There’s an old woman in the house with steel gray hair, and a small man with round glasses who walks the Pritchard land. Only Shelly, the Pritchards’s sometime maid, sees them too. Nellie knows that she has to get off Black Mountain, but Hobbs is squarely in her way. One dark night everything falls apart, and Nellie does leave Black Mountain for good…or so she thinks.

Told through the eyes of five women touched by the murderous cruelty of Hobbs Pritchard, Ghost on Black Mountain is set against the rich beauty of the Appalachians. Linked by blood, common experience, and the ability to see “haints,” each woman nonetheless has a unique voice that engages the reader with its compelling tale.