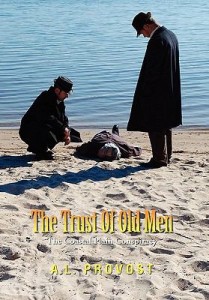 This complicated mystery, set in North Carolina during the Roaring Twenties, begins simply. UNC Hill freshman Alan Barksdale has labored diligently all first semester, with the dream of one day becoming a banker like his esteemed father, Marvin Barksdale. Mr. Barksdale is currently both the trust officer and manager of the enormously wealthy Commerce Bank in Raleigh due to the terrible death of the previous manager. Impatient to be reunited with his family for the winter holidays, young Barksdale hops in his brand-new, 1920 four-door Ford the minute classes end on the evening of December 20th. The snow falls thick and fast, and Alan tragically fails to see the young woman waving her hands in the middle of the road until it is too late. At least that’s what the Good Samaritan who stops to help tells the distraught young man.

Speaking of tragedy, seventeen wealthy, elderly men and women have passed away during 1920 on the Coastal Plain. But these deaths are no mystery: the Lenoir County Medical Examiner has carefully determined that each death was simply the result of age. Heart attacks, a misstep on the stairs, and falling overboard during fishing expeditions are only to be expected when men and women pass their seventies! Unfortunately for the departed, it’s possible that their ends were hastened by a lack of living kin on whom to spend their time and considerable fortunes–kin who might have prevented these accidents.

At first glance, no honest citizen would ever think that these deaths and Alan’s fatal car crash were related. But Norman Bates, a hotshot young reporter from Kinston, smells a rat. Now he’s on the tail of the biggest heist in North Carolina…maybe even America. But will he survive long enough to discover the truth?

Comments Off on A. L. Provost. The Trust of Old Men: The Coastal Plain Conspiracy. New York: Xlibris, 2010.