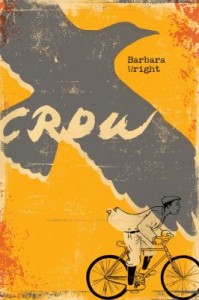 “We will never surrender to a ragged raffle of negroes, even if we have to choke the Cape Fear River with carcasses.”
–Alfred Moore Waddell, leader of the 1898 Wilmington race riots

The only complete overthrow of a local government in US history, the Wilmington race riots successfully removed the Fusionist party from power in the North Carolina town of Wilmington. In early November, a group of  insurrectionists known as the Red Shirts seized power from the legally elected officials, both white and black. Armed with rifles and a Gatling gun mounted on a wagon, they burned the offices of the  local African-American newspaper and wounded, killed, or ran off the majority of the black population.

Crow is the story of this coup, as seen through the eyes of Moses Thomas, a young African-American boy just entering the sixth grade. Moses is a typical child; he likes swimming, eating pie, riding bicycles, and getting into a little trouble now and again. Bright and motivated to learn, he loves going to school and finding new words, but lately he’s been frustrated. There’s trouble brewing in Wilmington, and no one will explain what’s going on. Groups of men in red clothing walk the streets, getting drunk and listening to angry speeches, and he isn’t allowed to enter the slogan contest at the hardware store, even though he’s under 18 and has the best entry. Worst of all, everyone is whispering words like “lynching” and “rape” without telling Moses what they mean.

Despite the tension,  Moses is mostly happy. His daddy, Jack Thomas, is an educated and honest man who works as a reporter for the Record in addition to serving as an alderman. Father and son share a particularly special bond, and together they spend hours playing word games and discussing philosophy. The other pillar of Moses’ life is Boo Nanny, his aged grandmother. Boo Nanny is the opposite of her son-in-law Jack in many ways–superstitious, filled with stories and poems, and prone to making bad-smelling medicinal concoctions. A cautious person lacking in self-esteem due to the abuse she endured as a slave, Boo Nanny’s ideas on the best ways to approach the growing conflict with white Wilmingtonians often cause her to clash with Jack, but the little family loves one another deeply all the same.

But with election day looming and the Red Shirt violence increasing, will the relative peace of Moses’ small world be shattered forever? A mature and heartbreaking look at an often ignored piece of American history, Wright’s novel, though aimed at young adults, will capture readers of all ages.