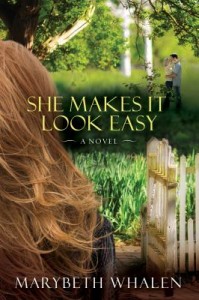 Ariel Baxter is struggling–her husband David is always gone on a sales trip, she has three active boys to deal with, and her photography business is picking up. There never seems to be enough time to make everything run smoothly. When she and David move their family to an upscale suburban neighborhood, Ariel feels exhausted, even though her new home is the house she’s always wanted. Then she meets Justine.

Justine Miller is Ariel’s perfect next-door neighbor. Always perfectly coiffed and lipsticked, Justine has two perfect little blonde girls, a perfectly clean house, serves meals done to perfection, and somehow always finds time to be the hit of the town. At first, Ariel thinks she’s found her new best friend, maybe even a sister, but something isn’t quite right.

Moving to the neighborhood at the same time as Ariel and David are Tom and his wife Betsy, and Tom can’t seem to keep his eyes off of Justine. Ariel assumes that her gorgeous neighbor is used to these kinds of looks from strange men, but it’s soon revealed that Tom and Justine were once high school sweethearts. When rumors begin circulating, Ariel must decide what to believe: her new best friend’s blithe reassurances, or the little voice in the back of her mind that refuses to be silenced. Is it possible for a woman who has everything to believe she has nothing worth keeping?

Told from the point of view of two first-person narrators, Ariel and Justine, Marybeth Whalen’s second novel will appeal to fans of Christian literature and Desperate Housewives alike.