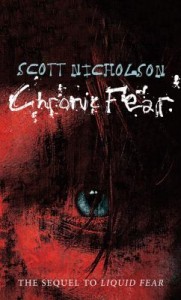 After the death of Dr. Sebastian Briggs, the cohort of strangers and old friends who survived the murderous events at the Monkey House try to go back to their old lives, but with little success. Roland and Wendy flee to the Blue Ridge Mountains, looking for some peace. Psychologically ruined Anita and David undergo extreme medical treatment, though with little hope for recovery. Senator Burchfield heads back to Washington, DC, intent on making a run for the presidency. Mark and Alexis Morgan return to their marriage, and while Mark is understandably fired from CRO for destroying their pet project, Alexis continues to conduct research at UNC.

But some people aren’t content to let Halcyon, a calming drug meant to cure PTSD, live on in memory alone–or its rage-inducing counterpart, Seethe. Although Alexis would prefer to forget everything, she can’t. Mark, who had never been exposed to Seethe before, has reacted badly to the dose from the Monkey House. He’s become unpredictable, prone to violent outbursts, and has developed a paranoid obsession with firearms. Quietly, Alexis has begun attempting to revive Halcyon, the only thing that can tame the Seethe left in Mark’s system. And someone has noticed. Alexis receives a chilling phone call at her campus office: Surely you didn’t think we could let you live, after what happened?

Soon, the survivors from the Monkey House are embroiled in a second fight to keep Seethe and Halcyon out of government hands, a race that takes them all across the Old North State. As before, their worst enemy isn’t the CIA, NCS, or even the greedy Senator Burchfield, but the darkness that Seethe brings to the surface in every human being it touches. How will they survive the Monkey House when the Monkey House is all around them?