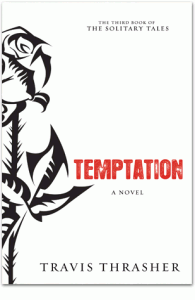 Junior year is over for Chris Buckley in the small town of Solitary, North Carolina, but school isn’t out. Forced to attend summer classes at Harrington High in order to graduate, Chris can think of about a million things a normal teenager would rather be doing than listening to Mr. Taggert drone on about literature and algebra. But Chris isn’t a normal teenager, not after the past year in Solitary. There are much darker, scarier things abroad in this seemingly sleepy mountain town than algebra.

This third installment in The Solitary Tales finds our teenage hero worn down. After the murders, satanic rituals, and strange phenomena he has witnessed over the course of just twelve months, all Chris wants is for it to stop. His friends have moved away or died, his mother is an alcoholic mess, and he has no one to stand with against the darkness. The enigmatic Pastor Jeremiah Marsh assures him that he has an answer to Chris’s pain– all Chris has to do is give up and give in. Pastor Marsh and his friends need Chris Buckley: they need him to fall in line, to stop fighting, and to stop falling in love with the wrong sort of girls. But what they need most of all is for Chris to trust them that he has powers he doesn’t fully understand– powers related directly to the founding of Solitary, and to what makes it such a hotbed of demonic activity. It’s very tempting: Chris is only sixteen, and what kind of sixteen-year-old takes on the Devil? But as Chris learns more and more about his true identity and his family’s history with Solitary, his horror grows, and it becomes more difficult for him to accept Pastor Marsh’s proposal. Chris craves the relief of a normal life, but is it worth his soul?