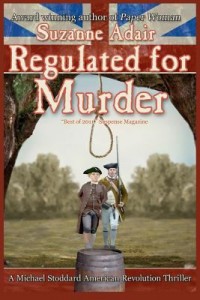 It’s 1781 in Wilmington, North Carolina, and Lieutenant Michael Stoddard has just kicked down the door of a traitorous land agent named Horatio Bowater, when his commanding officer abruptly pulls him away. Michael is furious, especially since his role as chief investigating officer will now go to his young assistant, but Major Craig is adamant that he needs Stoddard for something else. Unfortunately, Michael’s new mission is that of a lowly courier: Craig wants him to deliver a message to a man working for Lord Cornwallis in Hillsborough, far away from the bustling seaport of Wilmington. So Stoddard reluctantly disguises himself for the dangerous journey across a colony in the throes of a revolution. But this mission will be far less simple, and far more perilous, than he thought.

When Michael arrives in Orange County, he finds the man he’s supposed to meet, a Mr. Griggs, has been murdered. More than that, the county sheriff is a corrupt and devious man, and he’s bent on finding out who Michael is and why he has come to Hillsborough. Michael takes refuge with a local woman and her daughter, posing as a nephew, but he doesn’t have much time to find out what happened to Griggs before the sheriff discovers his true identity. Unfortunately, an old nemesis picks this as the perfect time to come to town: the sadistic Duncan Fairfax of His Majesty’s Seventeenth Light Dragoons. The last time they met, Stoddard barely escaped with his life…and Fairfax remembers him all too well. Will Michael solve Griggs’s murder and avoid his own?

Comments Off on Suzanne Adair. Regulated for Murder.[United States: CreateSpace], 2011.