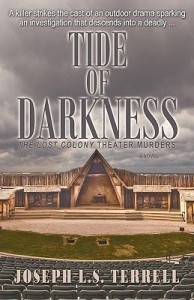 Harrison Weaver is a writer whose stories have been published in a  number of true crime magazines.  But Weaver is tired of murder and the lowlifes and psychos he meets in his work, so he’s getting away from it all by renting a house on the Outer Banks. Unfortunately for Weaver, he arrives in Manteo just as the body of Sally Jean Pearson is found.  Sally was a college student, in Manteo for the summer working as a stage hand and extra in The Lost Colony production.

Sally’s murder is eerily similar to the murder of another Lost Colony actress four years earlier.  Weaver wrote about that murder, making both friends and enemies in the process. Manteo has changed little in the past four years, and soon the investigative team that worked on the first murder is together again to work on the Pearson case.  Weaver’s buddy, SBI Agent Thomas Twiddy, is back, but so is Rick Schweikert, the county prosecutor who has it out for Weaver.  Schweikert and some other locals think it’s just too much of a coincidence that Weaver arrived in town the day Pearson’s body was found–could it be that the crime writer knows something the local police don’t?  When a sheriff’s deputy leads people to think that Twiddy and Weaver are about to break both cases open, Weaver finds himself in danger.  But before long it’s clear that the killer feels backed into a corner and that Weaver is not the only one whose life is in danger as this novel moves to a dramatic conclusion.