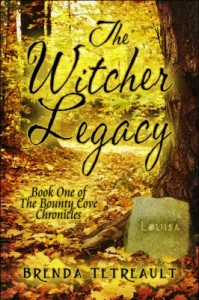 After a childhood spent moving all over the country with her restless mother, Melissa Witcher inherits her family’s ancestral home in Bounty Cove, North Carolina.  In Bounty Cove, she finds many things she yearns for: a chance for a relationship with the father she never knew and an immediate attraction to the handsome Michael Kemper, a local contractor who has been taking care of the abandoned Witcher house. But not everything is perfect.

Michael has just recently broken off his engagement to the two-timing Jessica, and he doesn’t want to rush into a serious relationship. Both he and Melissa are frustrated by taking things so slowly, but Michael insists. His last relationship ended so poorly because it was based on physical attraction and not true love, and something about Melissa is so special that he can’t afford to ruin what they might have. But while Melissa and Michael work on their budding romance, evil is afoot. The Witcher family has a dark history of murder, madness, and abuse, and restless spirits still linger around the venerable homestead. In addition to winning over the reluctant Michael, Melissa is determined to exhume her family’s ghosts, but this might prove more difficult (and dangerous) than she thinks. Strange phenomena have always been a part of the house: sometimes malevolent, sometimes beneficial. Will Melissa and Michael survive long enough to build a new future for the Witcher name?

Comments Off on Brenda Tetreault. The Witcher Legacy. Baltimore: PublishAmerica, 2009.