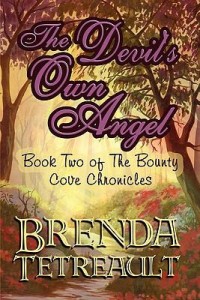 When last we visited Bounty Cove, a fictional small town on North Carolina’s coast, we followed Melissa Witcher as she reclaimed her family home from mold, neglect, and a serious infestation of malignant ghosts. Now Melissa is happily married to local boy Michael Kemper, but there’s always something going on in Bounty Cove. This time Angeline “Angel” Carston, a petite beauty on the run from an abusive ex-fiance, brings the trouble with her. Dogged by her stalker ex across the country, Angel is just looking for any safe place beyond his wealthy, possessive reach. She stops in Bounty Cove when she’s too tired to drive anymore, never thinking that something might tempt her to stay for the rest of her life.

Nick Damien is known as Devil due to his unfortunate surname, but the moniker fits. Bounty Cove’s resident playboy, Devil has logged a lot of time with the majority of the women around, which isn’t many to begin with in such a small town. When he happens to see a petite blonde unloading her car in front of the local bed and breakfast, Devil goes on the hunt. Unfortunately, he fails to realize that he is the prey, quickly falling hook, line, and sinker for Angel Carston and her silvery eyes. But there’s more than just physical beauty to Angel– she has a dark secret, one that is far more dangerous than her stalker ex-fiance. Although they’re deeply in love, will Devil and Angel be able to overcome the darkness that threatens the sleepy, seaside town? Meant for readers 18 and up, this series will delight those who like a healthy dose of the supernatural mixed in with their romance.

The Library also holds the first book in this planned series of six, The Witcher Legacy.

Comments Off on Brenda Tetreault. The Devil’s Own Angel. Baltimore, MD: PublishAmerica, 2010.