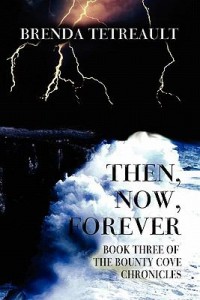 Molly Sinclair has shut herself away from human connection over the last six years. She has her twin sister Natali and her five-year-old son, Jack– so far, those relationships have met her needs. But when Chance Younger walks through the door of her flower shop one day, Molly finds herself unexpectedly caught up in a whirlwind romance that not only been destined…it’s already happened once before.

Chance Younger can’t explain why he’s immediately, viscerally attracted to the young, hazel-eyed florist. He’s only in Bounty Cove for a short time to visit his cousin Nick “Devil” Damien and his family, but Molly Sinclair makes him want to stay much longer. Molly makes it clear she isn’t interested in a short-term relationship, but after one evening together, Chase feels like he has no choice but to leave– although in the process of divorce, he’s technically still married to his mean-tempered wife, making any relationship with Molly impossible. Still, he’s drawn back, as is Molly, by this inexplicable feeling that they’ve known one another before. Unfortunately, both admit that they have a terrible feeling that their past relationship, while passionate, was not a happy one, and ended in blood. Were they married in a past life? And more importantly, is it possible to change the pattern, and live happily ever after?

While the first book of the Bounty Cove Chronicles focused on ghosts and the second gave us a glimpse of life with a hyperempathetic individual, this third paranormal romance from Brenda Tetreault delves into the world of reincarnation and past lives. Are we all just living the same pain over and over again? And can we ever change?

Check this title’s availability in the UNC-Chapel Hill Library catalog, where you can also find the first two novels in the series, The Witcher Legacy and The Devil’s Own Angel.