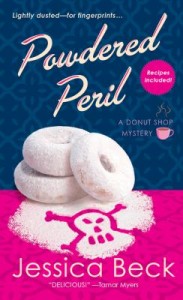 Suzanne Hart has never much liked Peter Morgan, the boyfriend of her good friend Grace.  She can’t quite put her finger on what it is about Peter that makes her so uneasy–is it that he reminds Suzanne of her charming, philandering ex-husband Max? When Grace shows up at Suzanne’s house in tears one night, Suzanne learns that her instincts about Peter were right.  Peter had more than a little something on the side; his phone (which Grace found in a sofa cushion) showed he was dallying with a handful of women.  Busy man.

But in short order, Peter is a dead man.  The night of the breakup with Grace, Peter drowned his sorrows at the Box Car Grill.  After Trish threw him out of the grill, Peter took revenge on Grace by vandalizing Suzanne’s donut shop; then someone battered Peter to death.  Initially Suzanne and Grace are suspects, but Chief Martin knows them well enough to rule them out–and to warn them not to investigate the crime on their own.  But of course they do.  They find that Peter played fast and loose with the truth and with other people’s money.  Their suspect list includes Peter’s brother, his business partner, his landlady, and several women in April Springs and a nearby town.  Even Suzanne’s new assistant, Nan Winter, seems to have had some kind of relationship with Peter.

Many of the characters in earlier books such as George, Emma, and Jake, make just token appearances in Powdered Peril which is more of a straight-up whodunit than some other books in this series. But like all the previous books, this one includes recipes for those tasty donuts.