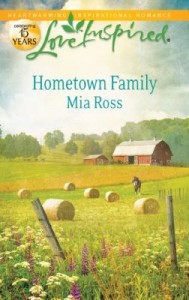 Matt Sawyer left Harland, North Carolina as soon as he graduated from high school.  He knew that he didn’t want to be a farmer like his father and he felt stifled by the closeness that his father and siblings expected from each other.  But it was his unspoken bitterness and grief over the early death of his mother that set him on a life of rambling, a life with no commitments, not even to his kin.  But now his father has died, and Matt finds that he has to stay in Harland to save the family farm and the way of life that is so dear to his siblings.  Matt agrees to stay long enough to get the harvest in; once that’s done, he’ll go back to his work as a mechanic in Charlotte.

But Matt didn’t count on meeting Caty McKenzie, or, really, meeting her again.  She was three years behind him in school and his awareness of her was slight.  He knew little about her other than that his brother John was clearly sweet on her.  But now Caty is a lawyer–his father’s lawyer.  It’s Caty who breaks the news to the Sawyer siblings that the farm has been left to all of then, with the stipulation that all decisions about it must be unanimous.  Matt can’t imagine that he and his sister Marianne can agree on anything, and he feels guilty knowing that his brother John has only worked on the family farm, nowhere else.

Matt’s clearly got some work to do: get over his guilt about leaving his family, his distaste for farming, and his habit of running from uncomfortable feelings–like his romantic interest in Caty McKenzie.  In contrast, Caty seems like she has an uncomplicated life.  She loves being back in her hometown and is looking forward to restoring the house that she grew up in.  But Caty’s childhood included the tragic death of her mother, and in restoring her childhood home she comes face-to-face with a secret from the past.  Will she be able to face that, especially after a house fire undoes her restoration work and almost kills her?  Over the course of the novel her faith, her hometown friendships, and Matt Sawyer’s growing love for her allow them both to see a life in Harland that neither expected.