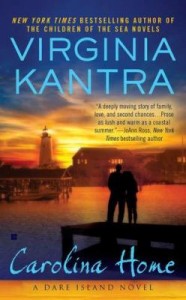 In Carolina Home, the first novel in Virginia Kantra’s Dare Island series, readers are introduced to the Fletcher family. Tom Fletcher, the family’s patriarch, is a former Marine and retired fishman.  Tom and his wife Tess now run an inn on the island.  Tom’s family has been on the island for generations.  Tess was a Chicago girl whom Tom met when he was in service, but she took to the island and happily raised her family there.  She is a rock to her family, always ready to share love and to adjust the family’s resources to accommodate one of her children’s needs.  As she did many years ago when her college-age son Matt came back from North Carolina State with a baby and a broken heart.

Matt’s baby, Josh,  is now a teenager, bright but indifferent to school work.  Josh’s language arts teacher, Allison Carter, a newcomer to the island, hopes to break through his indifference, but it is Matt, not Josh, who is interested in this attractive woman.  Carolina Home focuses on the romantic dance between Allison and Matt.  She’s trying to break free from her wealthy parents, be a good teacher, and not make waves at her new workplace.  Matt hasn’t had the time or the inclination to have a serious romance–he’s been raising his son, running a charter fishing business, and happily enjoying a series of summer romances with women who leave for the mainland at the season’s end.  Matt doesn’t understand Allison’s fear of gossip any better than he understands why he feels that this woman may not be like all the others.  The outline of the story is a familiar one, but Kantra fills it in in a charming way.  The classroom discussions of The Scarlet Letter will bring smiles to many readers’ faces, and Hawthorne’s old classic has relevance to the character’s lives.

While Matt and Allison are the focus of this novel, it is easy to discern that other members of the Fletcher family–mother Tess, sister Meg, who lives in New York, brother Luke, a Marine, and the newest family member–Luke’s ten year old daughter Taylor (unknown to the Fletchers until her mother died)–will play more central roles in future books in this series.