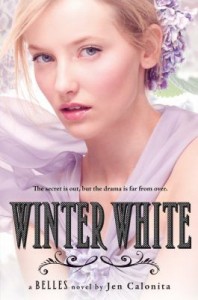 Isabelle “Izzie” Scott is still adjusting to the revelation that her uncle, North Carolina State Senator Bill Monroe, is in fact her father. The Monroe family may appear polished and smiling for the media sharks during the Senator’s re-election campaign, but away from the cameras, they’re falling apart. Mirabelle, who at fifteen is only a few months younger than Izzie, is still not willing to forgive her father, and neither is Izzie. Their younger and older brothers are fine, but the girls refuse to have anything to do with Senator Monroe beyond their filial duty to uphold his public image.

Meanwhile, mean girl Savannah Ingram, the queen bee of Emerald Prep, is on the warpath. Mirabelle, who used to be one of the most popular girls at Emerald Cove’s elite private school and Savannah’s best friend, is officially a persona non grata. Not only did she finally accept her strange and awkward half-sister as both a member of her family and a friend, but she didn’t help Savannah sabotage Isabelle’s burgeoning relationship with Savannah’s handsome ex-boyfriend, Brayden. Worst of all, one of the most important events in Mirabelle’s life is fast approaching: cotillion, where every young girl in Emerald Cove who is anybody comes out as an official debutante. Contrary to everyone’s expectations, Izzie is also participating. Will the girls survive the demanding preparations designed to turn them into proper Southern belles? As the preparations for the debutante ball become more difficult, boy problems loom, and more bad press appears, so the girls must once again work together to save their family and their own happiness.