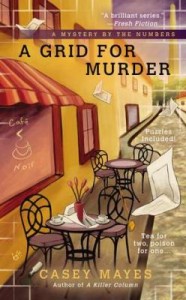 It’s natural that Savannah Stone is a prime suspects after Joanne Clayton is poisoned.  Savannah had the opportunity: half of Asheville saw Savannah having tea with the dead woman just hours before she died.  And the police think that Savannah had a motive: Joanne arranged to meet with Savannah so she could brag to her that she had gotten one of her puzzles in a newspaper that had repeatedly turned down Savannah’s.  Savannah senses that her story doesn’t seem convincing to the state police investigator handling the case, the chilly Captain North, so she decides that she’ll have to offer the police a more promising suspect.

Savannah is a relative newcomer to the area, so she relies on her closest friend, hardware store owner Rob Hastings to help her develop a list Joanne’s enemies.  It’s quite a long list! Savannah knows that she’s making enemies for herself with all her noisy, pointed questions.  She’s also aggravating her husband, Zach.  Zach, the retired chief of the Charlotte police department, is assisting Captain North with her investigation.  The two investigations–the professional one and the amateur–crisscross in a cozy mystery that shines a light on the good and the bad in small town life.