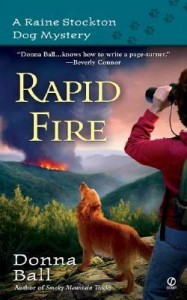 As we open on the second book in the Raine Stockton dog mysteries, the titular heroine is happy enough– her kennel business is doing well, her dogs are happy, and her part-time job with the Forest Service in small Hansonville, North Carolina provides just enough extra cash to keep life comfortable. Even her relationship with her estranged husband, Deputy Buck Lawson, is going as well as can be expected. That is, until said husband shows up on her doorstep with an agent from the FBI. Since Buck is with the local Sheriff’s Department, the situation isn’t all that strange, but it quickly turns personal: the FBI is looking for Andy Fontana, and they think Raine knows his whereabouts.

Back in their college days, environmentally-conscious Andy used to be Buck’s best friend and Raine’s boyfriend. In fact, she almost married him instead of Buck, until he disappeared under the shadow of a terrible act of eco-terrorism that left several people dead. The FBI were never able to locate him, but now they think he might be returning to Hansonville. Raine never believed that Andy was guilty, but things start looking bad: a local construction worker turns up murdered, some bulldozers are vandalized, and Raine starts receiving what might be messages from her erstwhile beau. When a forest fire breaks out, it’s up to Raine and the one companion who has never abandoned her, the faithful golden retriever Cisco, to join the manhunt and finally find out the truth.