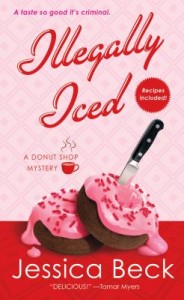 James Settle was a newcomer to April Springs but with his easy going style he fit right in.  He was a blacksmith and many people, including Suzanne Hart, were delighted to have the lovely things that he made.  Everyone in town knew that Suzanne and James were friends, but that doesn’t prevent Gaby Williams from fingering Suzanne as the murderer when James is stabbed in the city park across from Suzanne’s donut shop. Yes, Suzanne and James did have a public argument the morning that he died, but a little bit of smoke wafting into the donut shop wouldn’t have spoiled their friendship.

Suzanne has an alibi for the time of the murder, but she knows that she will be under a cloud of suspicion until the murderer is found.  As in similar situations in the past, Suzanne turns to her friend Grace to help with the sleuthing. The friends discover that James was estranged from the other members of his very wealthy family, so greed could been the motive for his murder. But we all know that the other common motive for murder is that nasty mix of love/jealousy/revenge. Which is it in this case? As Suzanne and Grace add to and subtract from their list of suspects, it is fun to see how their minds work and how they navigate Suzanne’s delicate relationship with April Springs Police Chief Martin who is still courting Suzanne’s mother.

Readers will also enjoy the scene in which Suzanne’s book group discusses The Killer’s Last Bite, a book in a long running series of mysteries. The women ask some of the same questions that readers might ask about this series. Can we assume that the answers are the author’s?