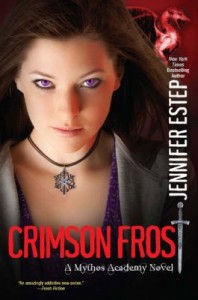 With the Norse chaos god Loki freed from his prison, Gwen Frost should be extra careful. Besides an evil god, she also has to look out for his Champion, a murderous girl called Vivian, and her army of Reapers. Life at the Mythos Academy, high in the supposedly peaceful mountains just outside of Asheville, has never been more dangerous. And yet, Gwen has never been so happy. Logan Quinn, the boy she’s had a crush on forever, has finally asked her out. He’s even given her a winter present– a beautiful snowflake necklace. They’re sitting together in a local coffee shop when Gwen’s reality finally comes crashing down around her. She’s arrested by the Protectorate, her world’s governing body, for the crime of…freeing Loki from imprisonment.

It all seems like some ridiculous joke. Gwen almost died in the attempt to keep Loki from being unleashed on the world, and now she’s being accused of helping him to escape? The Protectorate is very serious, however, in its accusation. Soon the entirety of Mythos Academy knows that Gwen is an evil Reaper, and they all want revenge. This would be uncomfortable in a normal high school, but at Mythos Academy, a training school for the descendants of ancient warriors, it’s definitely deadly. Will Gwen be able to survive not only Loki and his Champion, but the anger of her fellow students? Will she ever clear her name? And will Logan stand by her during her trial, even when his father is the head of the Protectorate?

Young adult readers ages 13 and up will enjoy the continuing adventures of Gwen and her friends in this fourth installment in the Mythos Academy Novels.