Brenda Tetreault. A Ghost of a Chance. Baltimore, MD: PublishAmerica, 2011. 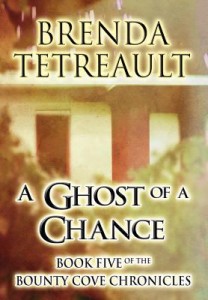 In this fifth installment in the Bounty Cove Chronicles, the reader follows the story of Kate Morgan, who comes to Bounty Cove to escape her misery but ends up staying for love. Three years ago, Kate’s fiance Tucker was murdered on the morning of their wedding. His ghost, pulled back to earth by the depth of Kate’s despair over his death, is determined not to leave until his former fiancée can find true love once again. Unfortunately for the grieving Kate, having Tucker’s ghost around isn’t helping her to move on.

Five years after that finds Kate in small town Bounty Cove, North Carolina, seeking peace with her new life. It is no longer so painful to speak with Tucker’s ghost on a daily basis, even though his insistence that she find love again drives her crazy. Then, in a chance moment in the local bakery, Kate meets Wil Montgomery, and her world turns upside-down. Handsome Wil, a famous movie-star who decided to leave the glitzy facade of Hollywood life, has returned home to Bounty Cove where he grew up, looking for some peace. He didn’t intend to fall for someone, but he can’t help loving Kate. But he has baggage of his own, and those dark events are haunting him…literally. Like Kate, he has a benign ghostly companion hoping to see that he moves on and enjoys life. But will the couple be able to dismiss their troubled pasts so easily? Love makes all things possible, especially in Bounty Cove.

Comments Off on Brenda Tetreault. A Ghost of a Chance. Baltimore, MD: PublishAmerica, 2011.