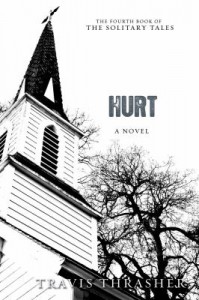 In this fourth and final installment in the Solitary Tales, author Travis Thrasher takes us back once more to the fictional town of Solitary, North Carolina.

Chris Buckley has tried everything when it comes to the evil in Solitary. He’s mocked it, pretended it doesn’t exist, given in for a time, even run away. Nothing has stopped his demon-possessed great-grandfather, Walter Kinner, from giving up his satanic control on the town. Worst of all, Chris is somehow the centerpiece of his upcoming final showdown with the powers of good. Tired, terrified, but most of all determined never to give in to the Devil, Chris takes the only course of action left– fighting back. It’s hard enough being a teenaged boy without having to fight the powers of darkness, but with his belief in the powers of God growing stronger every day, Chris has hope where before he had none.

Unfortunately, his very real demons know exactly how to keep him on their side– by threatening the ones he loves. His mother has been missing for some time, held by Walter’s henchmen. They’re also threatening his latest girlfriend, the sweet and guileless Kelsey. Since his other two girlfriends, Jocelyn and Lily, have both ended up as bloody sacrifices, Chris was reluctant to start dating again. But there’s just something about Kelsey that makes him think everything will be okay. But there is a long fight ahead, and no telling who will emerge triumphant. Will faith, hope, and love keep back the darkness?

Check out this final chapter in the Solitary Tales in the UNC-Chapel Hill Library catalog.