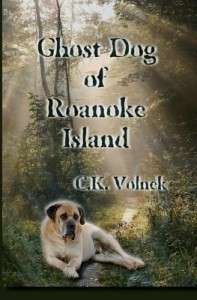 It feels like fate when Jack Dahlgren’s family inherits his great-aunt Ruth’s home on Roanoke Island in North Carolina. His dad has lost his job, and all the family’s savings are gone. But twelve-year-old Jack doesn’t want to live on Roanoke Island, especially in a house that the kids at school say is haunted. He also feels responsible for his little sister’s accidental fall off of a nearby sea cliff, which put her in a hospital in Raleigh. On top of everything, a hurricane is bearing down on the Outer Banks, howling like a monster.

…Or is it a hurricane? There’s definitely some stormy weather, but there’s also something dark and scary living in the woods near the Dahlgrens’ new house. When Jack investigates, he finds a mysterious, vanishing mastiff, and something much wilder. Later, Jack meets and befriends their Algonquin neighbor, Manny Braboy, who explains it all– the evil living in Jack’s woods is a Witiku: a demon summoned by the natives of Roanoke Island in the sixteenth century to rid the island of all invaders. Incredibly, Manny tells Jack that he, Jack, must be the one to defeat the Witiku. The twelve-year old is skeptical, but when Manny takes him back to the sixteenth century to observe the events of the Lost Colony unfold, he begins to believe. Will Jack defeat the Wikitu? Will Roanoke Island finally be at peace? Will Jack ever be happy in his new home?