Lucy Arlington. Every Trick in the Book. New York: Berkley, 2013. 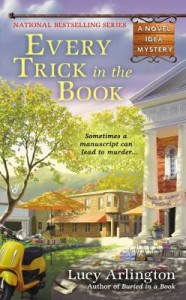 Lila Wilkins has reached her goal of becoming a literary agent at A Novel Idea, a publishing house in small-town Inspiration Valley, North Carolina. The position is a serious step up from her first job at A Novel Idea as an intern, and with her new title comes a salary allowing her to purchase a dream home in the cozy town. Everything seems perfect — her twenty-something son, Trey, is happy living and working at the nearby Red Fox Co-operative farm, and she has an exciting new relationship with handsome local police officer Sean Griffiths. Of course, just when everything is looking up, an element of danger appears.

The trouble starts with an unsettling horror manuscript Lila receives by mistake. As the agent assigned to romance and cozy mysteries, Lila’s usual reading is lighthearted and fun. This manuscript is full of blood and gore, and she passes it off to her colleague, the literary agent assigned to thrillers and horror novels. Unfortunately, the manuscript has no contact information for the author– just an attached note saying that he will be pitching the novel to the agents at their upcoming Book and Author festival. Lila simply dismisses the manuscript as not in her area, but when she is nearly murdered at the book festival, she’s convinced it must be the mysterious author. Then, she finds the body of another editor nearby. Shortly after, a local author is killed, and the two murders appear to Lila to be connected. Will Lila find the murderer in time to prevent her own death? And could clues to his or her identity be written into the grisly manuscript?

Lila Wilkins is determined that she will have the final word.

Check out this second installment in the Novel Idea Mysteries in the UNC-Chapel Hill Library catalog.

Comments Off on Lucy Arlington. Every Trick in the Book. New York: Berkley, 2013.